Home / Features / Your GALAK-Z: Variant Mobile guide – tips and tricks to get you started 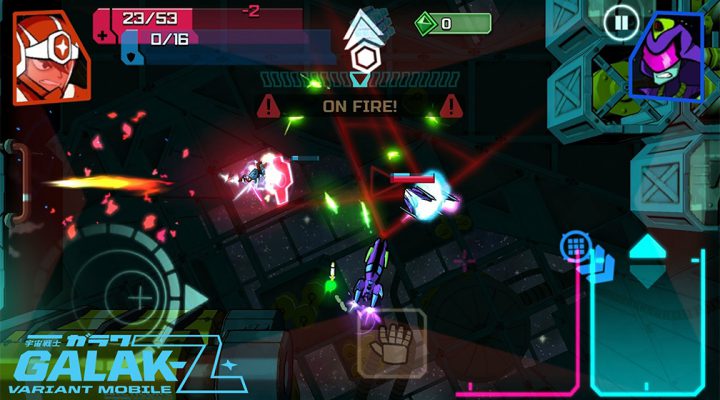 That’s why you need this guide, covering the frantic hustle bustle of interstellar combat as well as the complex business of understanding and using the loot you earn to best effect.

We’ll start with the combat, as for the most part that comes before the loot. 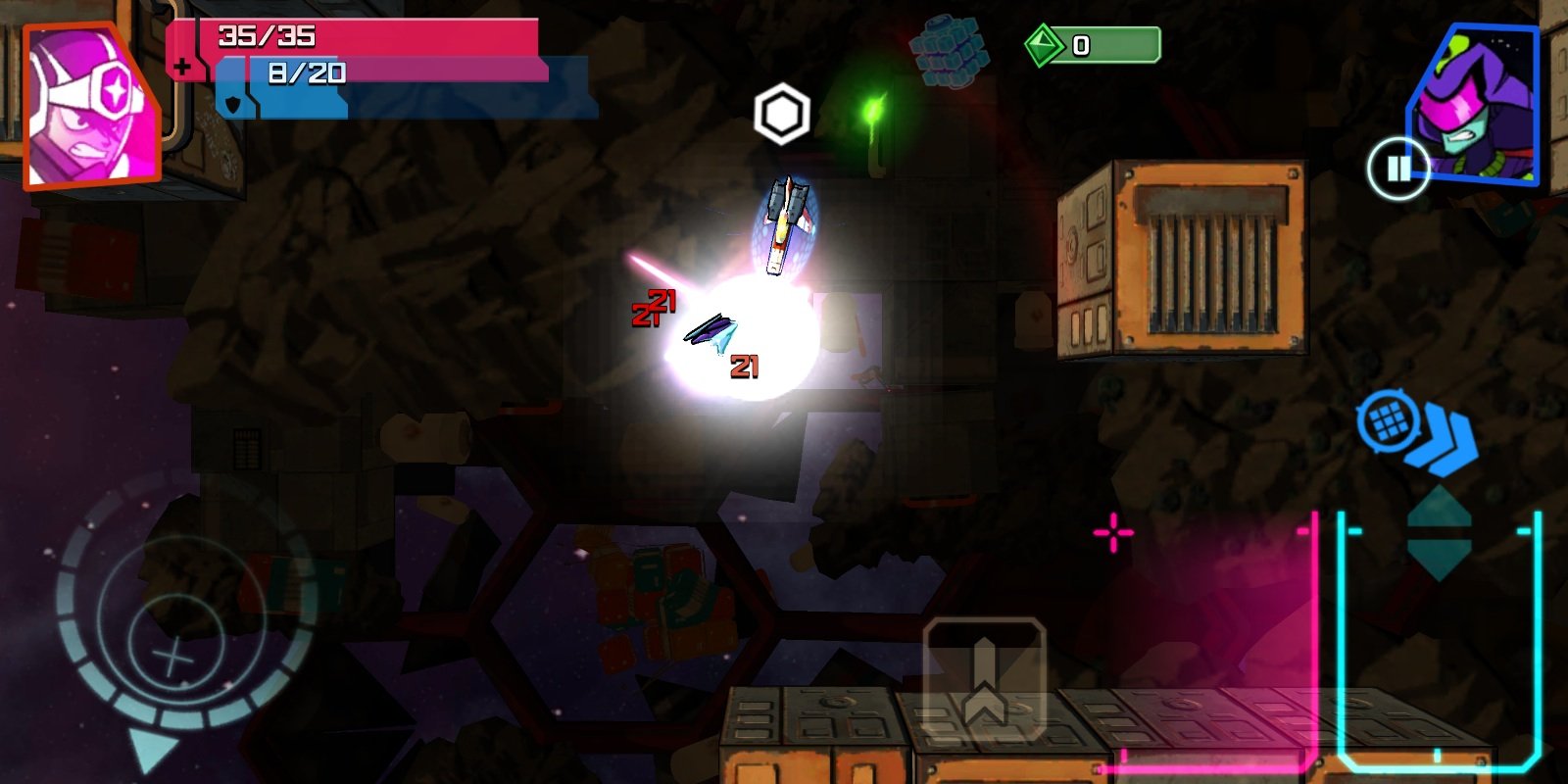 There are two types of craft to pilot: a mech (GALAK-Z), and a fighter (GALAK-S). They both move and attack the same way, and they both have the same regenerating shield. You can only take damage when this shield is down, so it’s best to be circumspect, falling back when you’re vulnerable and diving back into the fight when the power is back.

This Move button has forward and reverse positions. As long as you’re just holding a finger down you’ll move forward, but you can slide it down to go backwards — an indispensible trick to learn as it dramatically improves your agility.

In the case of the fighter, you can also swipe up or double-tap on the Move button to pull off a dodging maneuver called a juke.

The pink-outlined area to the left of the Move button shoots. 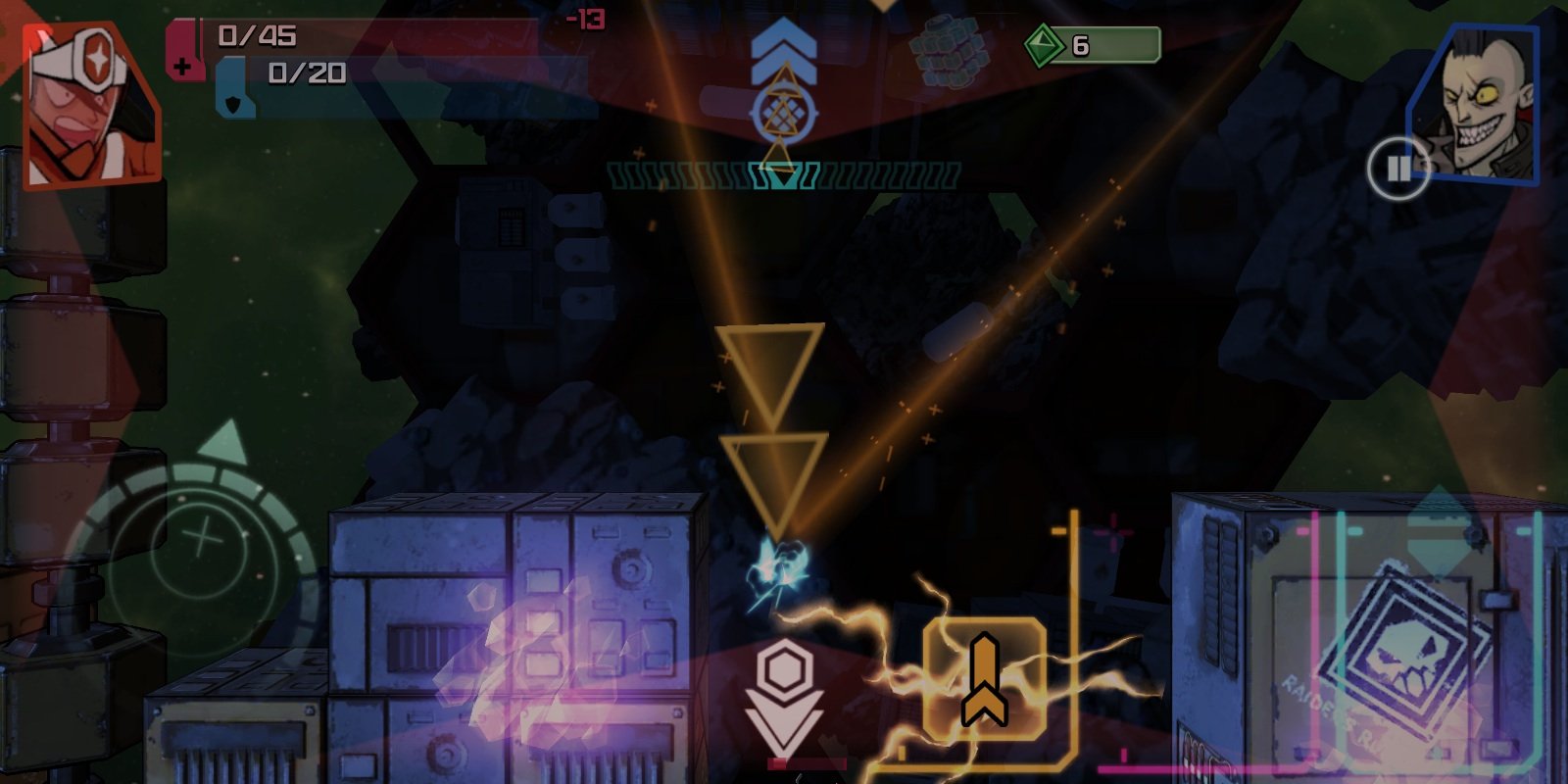 With the mech, you can hold this button down for a special charged attack. With the fighter, holding the button down just keeps the missiles coming. They may look a bit scattershot at first, but don’t worry — they get more accurate and powerful with upgrades.

Each craft also has a special attack, which you deploy by tapping the little hand icon to the left of the fire button. These special attacks are rechargeable, and they charge whenever you either inflict or take damage.

The mech’s special attack is a grappling line that shoots out and grabs an enemy for a bit of close-up pummelling. The mech is also armed with a second shield, protecting it from frontal damage. It drops this shield every time it attacks, so timing is everything.

The fighter’s special attack is a volley of heat-seeking missiles. It’s best to wait until you have the maximum possible number of enemies in your sights before letting them loose.

Whichever craft you’re piloting, pay attention to the exploding crates, spikes, lava pits, and other hazards scattered around. These hurt enemies too, so learn how to use your environment to your advantage. 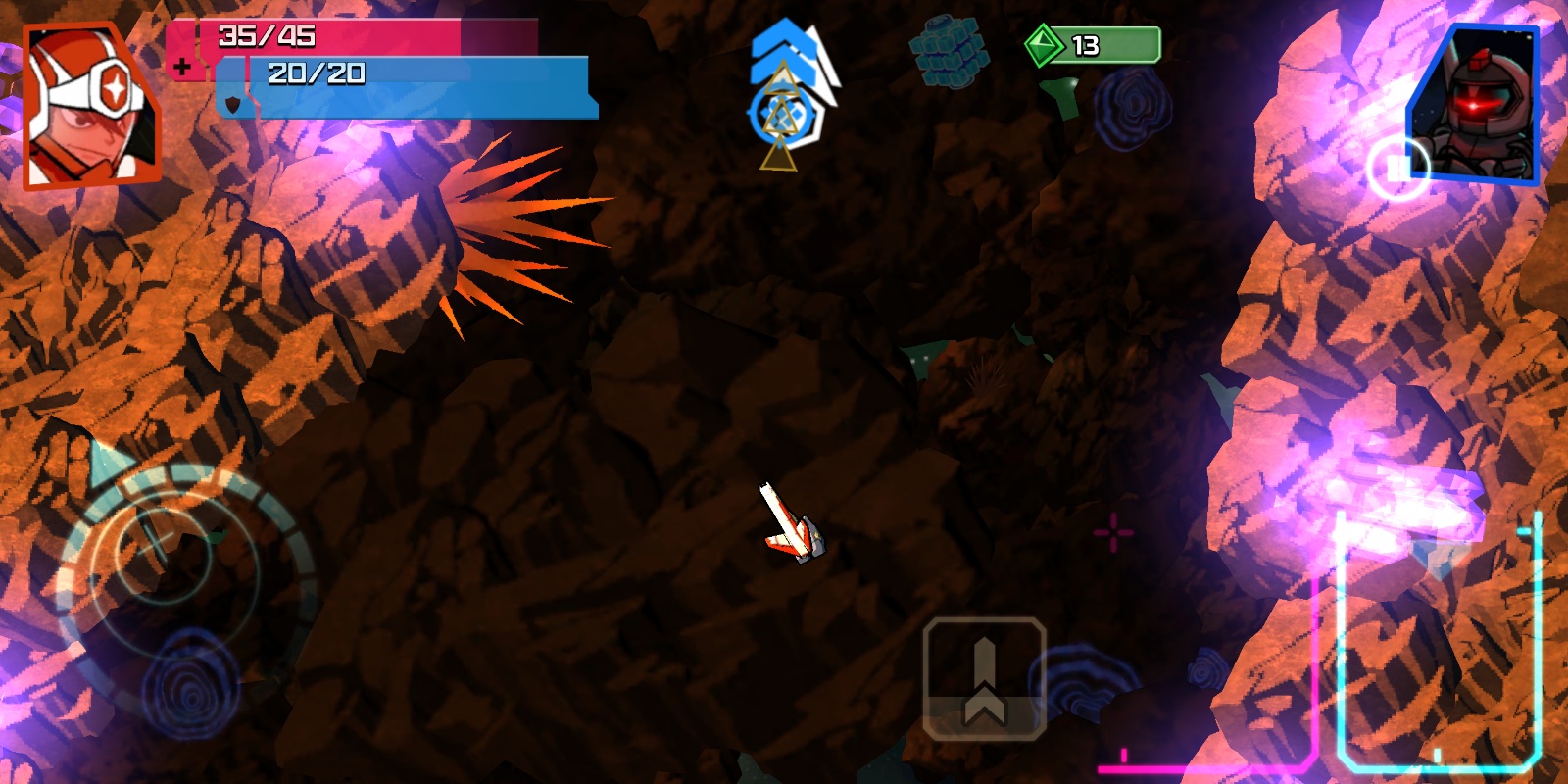 Like any self-respecting RPG, GALAK-Z: Variant Mobile has a whole economy of different currencies and loot to collect and invest in making yourself invincible. Here’s a quick overview.

Bots are your helpers in GALAK-Z: Variant Mobile. These charming sentient machines crew your fighter and mech, bestowing their skills and strengths upon it. They come in four different flavours: Speed, Offense, Resource, Attack.

To level-up a Bot, you have to cannibalize another Bot, which is tough to do because, as we say, they are charming.

You can also use Bots as a defense team, taking on other players in AI-controlled multiplayer bouts. Plus, Lab Bots decrypt relics and carry out research.

To obtain new bots you can either win them (very occasionally) by achieving a high score in a Bot Battle Season, or buy them at the shop with Crash Coins. 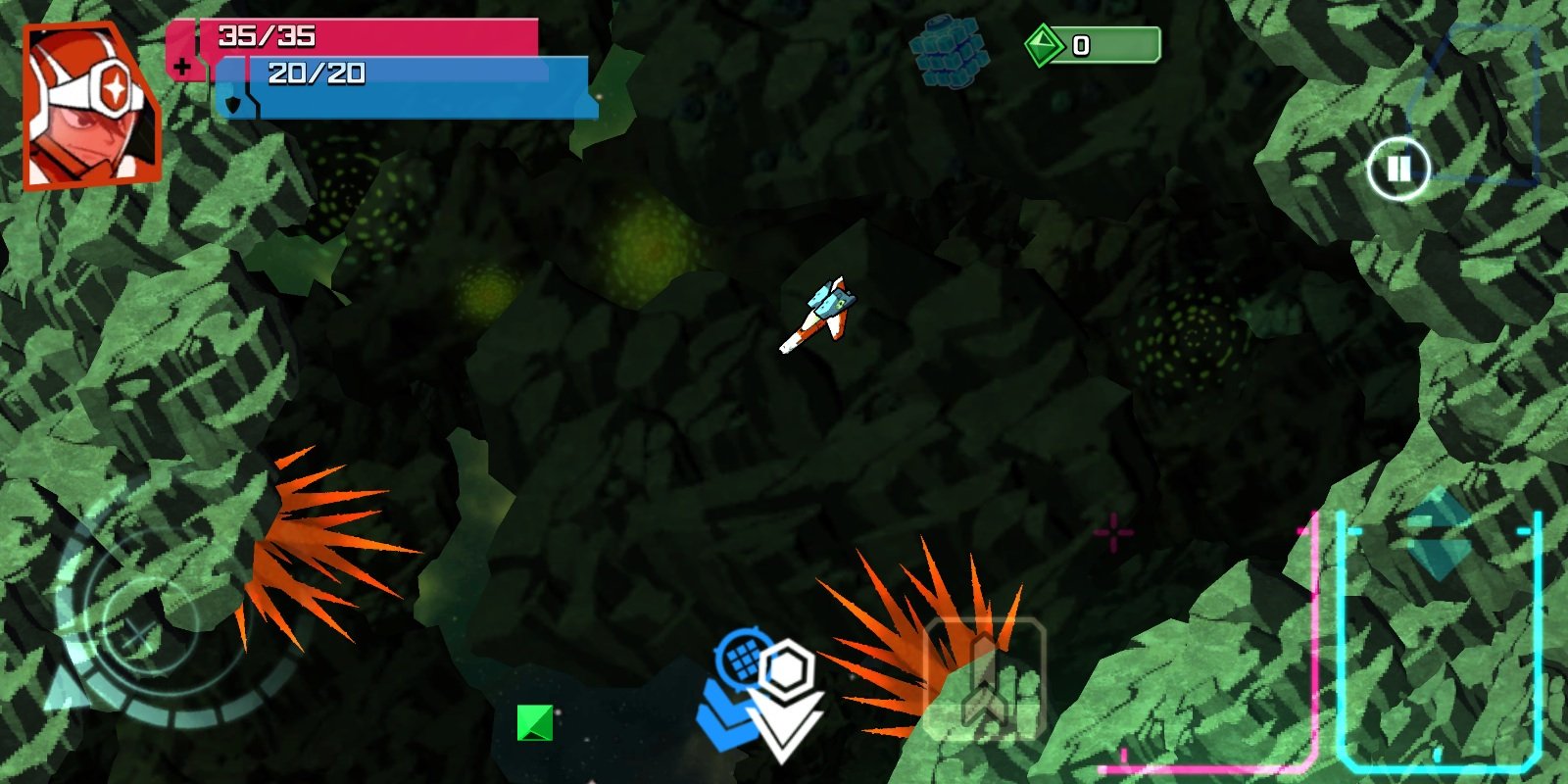 Crash Coins are the most valuable currency in GALAK-Z: Variant Mobile. You can use them to buy Luxury Bot Capsules, and also to increase the number of Bot Collection Slots you have, and purchase consumable boosts.

Also, they help you in battle by letting you come back from the dead. In missions where you’ve battled hard with a precious relic and you explode near the end of the stage, these reincarnations are a godsend.

You can also use Crash Coins to instantly refresh the Battle Opponent list and instantly complete the relic decryption process. So, all in all, Crash Coins are great.

You can can either buy these in the shop or earn them by opening relics, levelling up, and completing Achievements.

Salvage is the second most valuable currency in the galaxy. The supply is much more generous, and you use it for repairing your ships, buying upgrades when they’re ready, and purchasing consumable bolt-ons.

You get Salvage in battle by killing enemies, but also through daily log-in deliveries, by decrypting relics, completing Quests, earning Achievements, levelling up, and participating in Bot Battle Seasons. And if all that still isn’t enough, you can buy Salvage in the shop. 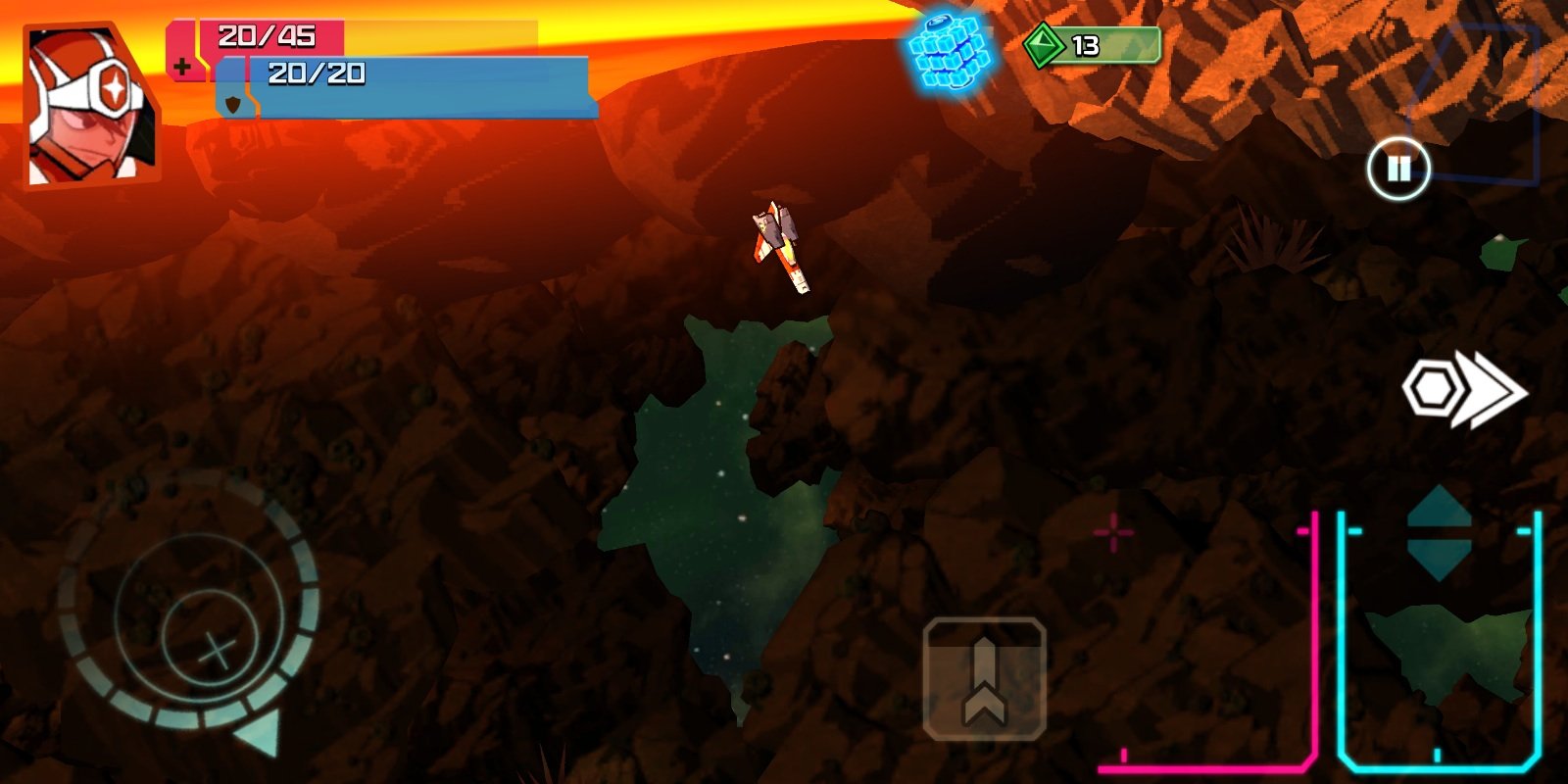 There are two kinds of Relic in GALAK-Z: Variant Mobile – standard Relics and Battle Relics.

You get ordinary Relics by defeating a Dark Bot Ship in missions. As long as you make it all the way to the end, it’s yours. After that you need to decrypt — a process you can expedite with Crash Coins. Once opened, Relics give you Upgrade Fragments, Bot Parts, and sometimes Crash Coins.

You get Battle Relics by winning three Bot Battles. You can only get one of these once a day.

Bot Parts allow you to craft new Bots by buying Crafted Bot Capsules at the shop (as opposed to Luxury Bot Capsules, which, as you will recall, are bought with Crash Coins).

You win Bot Parts by getting into Bot Battles with other players, either as defender or attacker, winner or loser.

You can put these tips to the test by downloading GALAK-Z: Variant Mobile on Google Play and the App Store now.

The Walking Dead: Our World — How to get free coins

The Walking Dead: Our World — How to make weapons and Heroes better