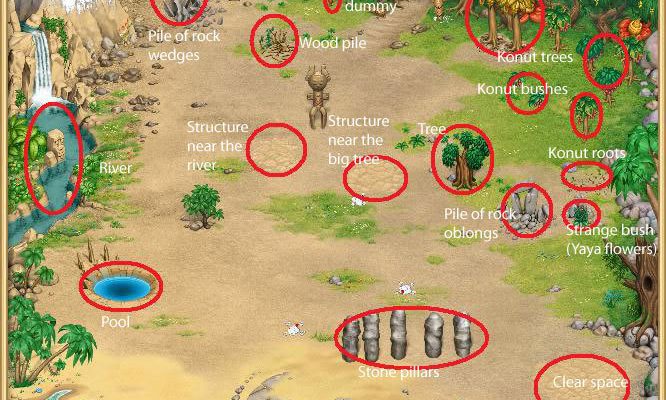 Builder (gorilla)
Role: Build structures.
How to evolve: Drag a wobbly onto the stick pile, then onto a building site. Or, equip a wobbly with a tomahawk and drag him onto the stone pillar.
Notes:

Forager (giraffe)
Role: Gather konuts for food.
How to evolve: After the Food Storage bin has been constructed, drag a wobbly onto a Konut Bush.
Notes:

Water Gatherer (elephant)
Role: Gather water, dig wells.
How to evolve: After the Water Tank has been constructed, drag a wobbly onto the river. It will automatically begin collecting water and taking it to the Water Tank.

Doctor (zebra)
Role: Heal sick tribe members. Research cures for diseases.
How to evolve: Drag a wobbly onto a sick tribe member, or onto the medicine table in front of the hospital.
Notes:

Defender (lion)
Role: Defends the tribe against hyenas.
How to evolve: Drag a wobbly onto a hyena, or onto the practice dummy.
Notes:


PLACES AND THINGS ON THE MAP

The first map shows areas of interest at the beginning of the game. 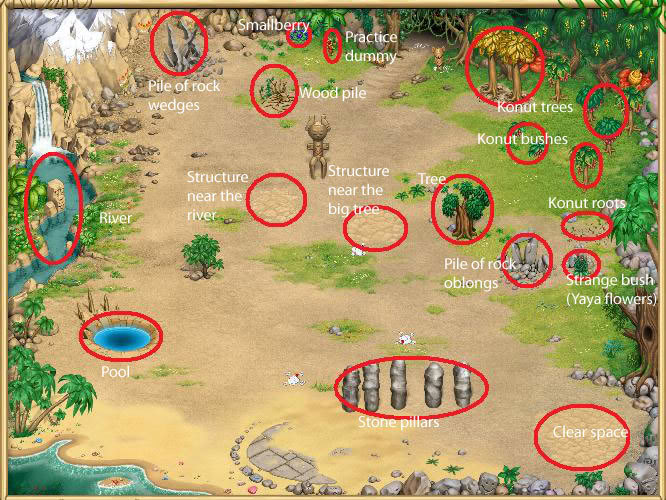 The second map below shows a few more things to investigate after the river dries up. 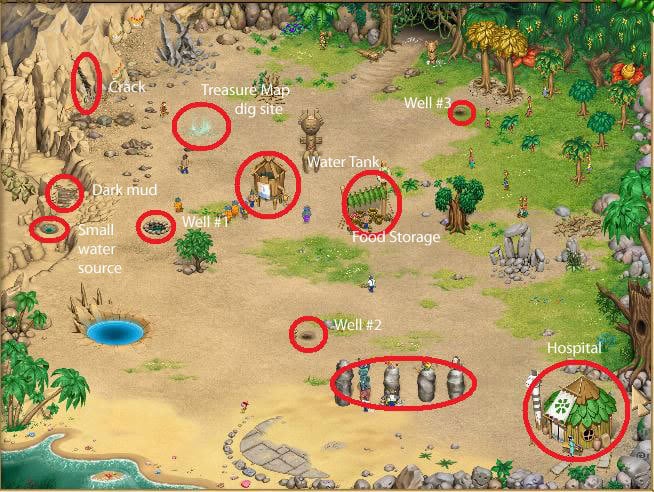 West
Mysterious Swirling Pool – Drag an evolved tribe member into the pool and they’ll revert back to a wobbly.

River – A source of water. Drag wobbly onto it and they’ll evolve into a water gatherer. Drag elephants here for them to gather water.

Dark mud in river – After the river dries up you’ll see a dark patch of mud in the riverbed. This is where the elephants come to dump the dirt from the wells they dig. Have a giraffe dig up some of this dirt and it can be used to fertilize the sickly konut trees.

North
Pile of Rock Wedges – Drag builder or defender onto the stick pile then here to make a tomahawk.

Practice Dummy – Drag a wobbly here to evolve them into a lion. Lions can practice their defender skills here.

Center
Structure Near the River – This is the building site for the Water Tower. Drag workers with wood here to get started on building.

Water Tank – The structure that can be built on the Structure Near the River area of the map. Elephants gather water and bring it here to store. Tribe members will come here to drink.

Structure Near the Big Tree – This is the building site for the Storage Bin. Drag workers with wood here to get started on building.

Storage Bin – The structure that can be built on the Structure Near the Big Tree are of the map. Giraffes gather food and bring it here to store. Tribe members will come here to eat.

Tree – After you’ve completed the first treasure map and revealed the tree symbol, drag a builder with a tomahawk onto the tree to gather wood (building materials).

East
Pile of rock oblongs – Drag a builder onto the stick pile then onto here to make a hammer.

Konut Bush – can be harvested by wobblies.

Konut Tree – can only be harvested by giraffes because they can reach it.

Tall Konut Tree – these trees have yellowish leaves and look sicky. Eventually you can fertilize them.

Very Tall Konut Tree – these are the sickly brown looking plants with the cracked dirt in front. Later on, you can build a well nearby and irrigate them.

Konut Roots – Give a shovel to the doctor to have them dig up the roots.

Strange Bush – Drag a Guru doctor onto the bush to clear away the leaves and reveal Yaya Flowers. These are used to cure fever.

Hospital – The structure that gets built on the Clear Space. Have your doctor collect roots and flowers and bring them to the hospital to discover new cures for diseases. Drag your doctor onto the hospital to have them practice medicine.
Once you’ve researched all the disease cures, if a tribe member gets sick, simply drag them onto one of the stretchers in front of the hospital and the doctors will automatically heal them – you don’t have to manually collect any ingredients.

Stone Pillars
Drag workers with tomahawks onto them to chisel away at the stone pillars and turn them into statues. Each statue represents one of the jobs – from left to right: zebra, elephant, giraffe, lion, and gorilla. Each profession will learn more quickly if its statue is built. Gorillas can increase their building skills by continuing to work on to statues even after they’re built.
In the latter stages of the game when you’re trying to build in ark, only expert builders can start working on the ark, so drag some wobblies onto the statue to train them up quickly.

There are 18 goals to complete in order to finish the game. You can see how many goals you’ve completed by clicking the Progress button. Sometimes you’ll be prompted by messages and hints about what to do next; other times you’ll need to figure out how to complete a goal by experimentation.

This walkthrough shows how to complete goals in the order in which they’re listed, but you don’t necessary have to complete them in order. 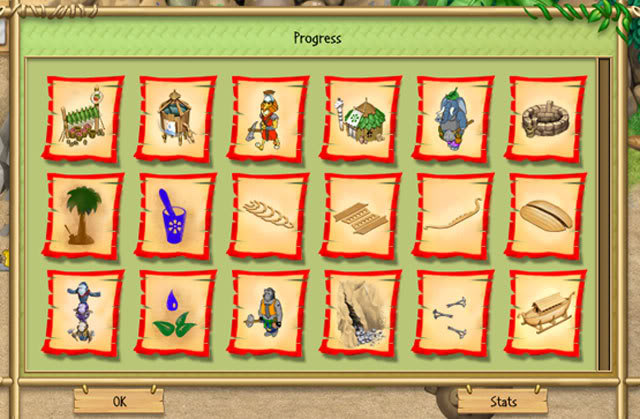 Problem: Limited Resources
The first thing you’re asked to do is find a way for the tribe to store food and water and build up its reserves. Start by breeding your wobblies. I had eight builders, two doctors and one lion to start out.

At this point you should breed about eight elephants and eight giraffes to stock up on food and water. 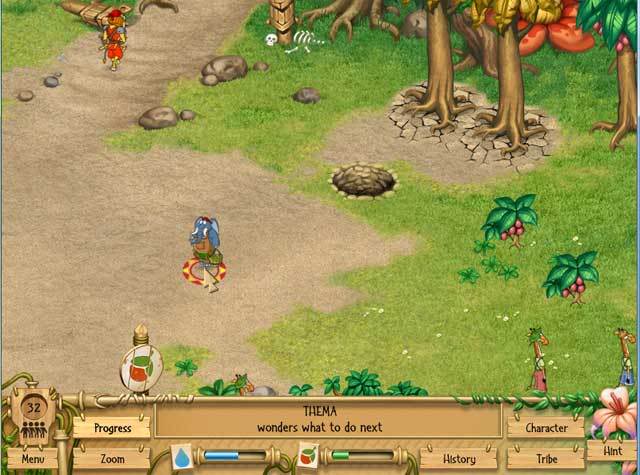 Problem: Water rising
You’ll get a couple of messages that sea level has started to rise. It looks like you’ll have to figure out a way to get off the island… completing the four treasure maps holds the key… 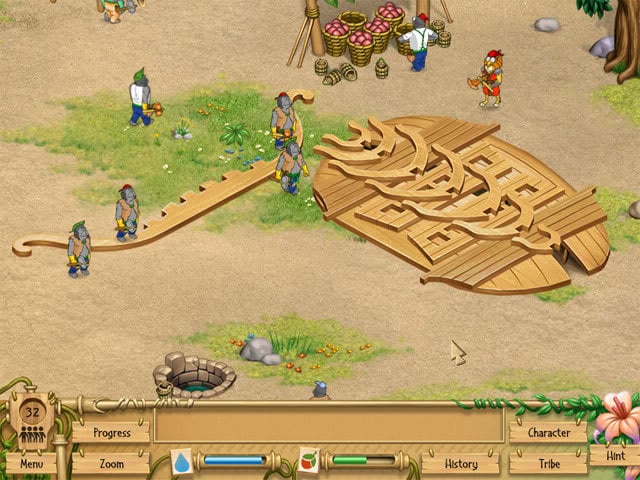 Once the ark is finished, you’ve won the game. Congratulations!”;