Home / Walkthroughs, Tips, Cheats / Which Cards Are Strong Against Others in Star Wars: Force Arena

Which Cards Are Strong Against Others in Star Wars: Force Arena 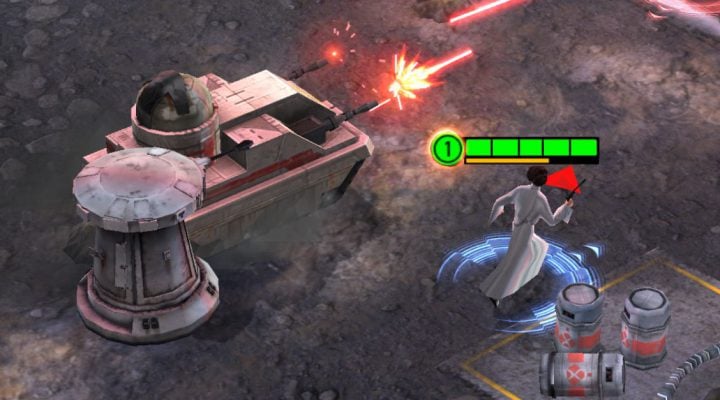 There isn’t another game out right now for mobile devices quite like Star Wars: Force Arena. Not only has Netmarble infused it with Star Wars goodness ranging from the original trilogy all the way up to Rogue One, it’s the closest the world has seen to a MOBA based on the beloved sci-fi franchise — yet with a number of simplifications that make it accessible to all.

If you’ve played Clash Royale or other games with both MOBA and card game mechanics, you probably already have a feel for the idea that for every card an opponent plays, there’s a unit or vehicle in your deck that makes for a good counter. The tricky part is figuring out which one, as Force Arena doesn’t use a rock-paper-scissors relationship between cards to make it clear which ones might hold the upper hand over others.

By the same token, some units or weapons are weaker against specific cards as well. If only there was a way to have that information at your fingertips …

Happily, there is. If you go into any card in your collection (except for leaders) and tap on it to view its details, you’ll see three tabs at the bottom. You’ll want to tap on the one that says ‘Advantages.’ 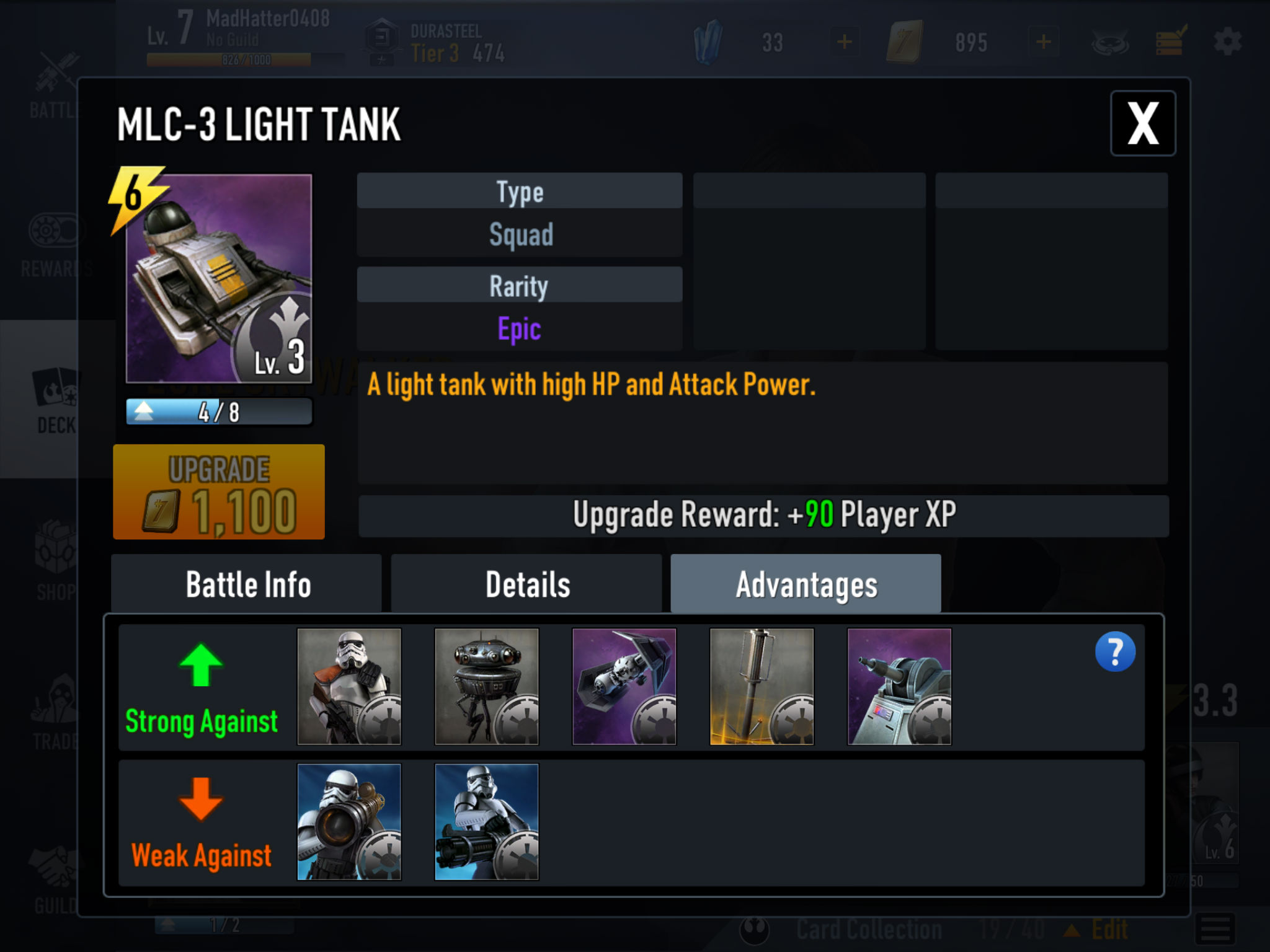 What you’ll see next is the list of other cards that card is strong against, in addition to others against which it is weak. There can be up to six cards in each category, though it’s important to note that since some cards are not unlocked until you advance to higher tiers, both lists could grow as you continue to move up the ranks.

Let’s use the MLC-3 Light Tank from the Rebel faction as an example. At Tier 3, this card has advantages over the Sandtrooper, Probe Droid, TIE Bomber, Energy Pike Trap and Imperial Laser Turret. Obviously, it makes an effective counter for any of those cards played by your opponent, and if you are under attack by Sandtroopers and Probe Droids, you’ll know that saving up the six energy to play it will be a wise move.

On the other hand, it has disadvantages against the Rocket Stormtrooper and Imperial Heavy Gunners. You can use that knowledge for yourself in reverse, playing those cards from your Empire deck if you find yourself up against the Light Tank — and you will. 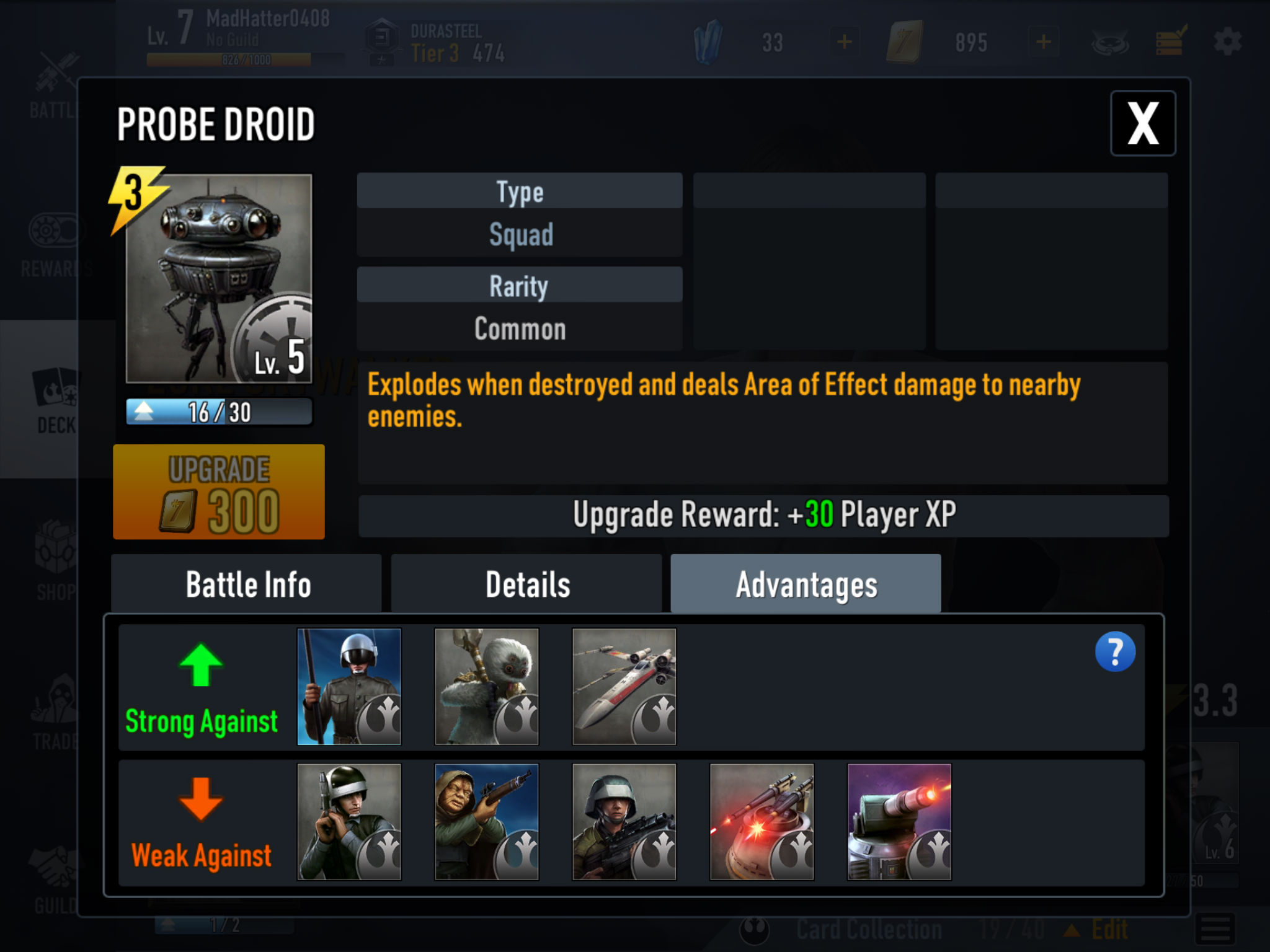 Interestingly, there’s not always a one-to-one correlation between these advantages and disadvantages. The Probe Droid does not list the Light Tanks as one of the units for which it holds a disadvantage, suggesting that the MLC-3’s advantage over it is relatively weak.

With any game like Star Wars: Force Arena, the meta-game will always be changing and evolving over time, but knowing where to find any card’s strengths and weaknesses will help you stay ahead of the curve, or at least not lag too far behind if you don’t play every day. Good luck out there, and remember, when you’re up against that pesky MTV-7 Light Vehicle, a Dressellian Sniper is your best friend. Just trust me on this.