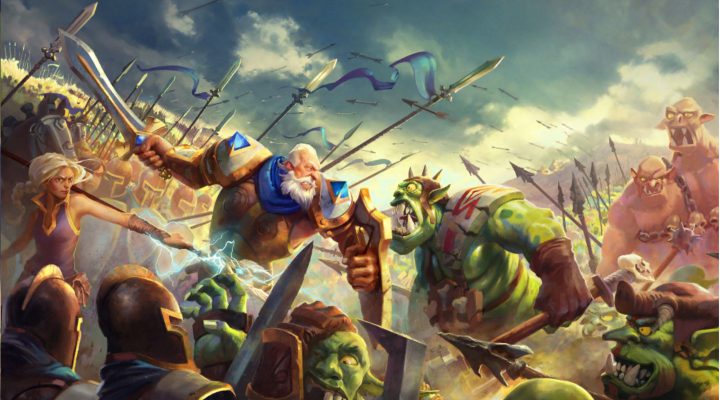 It’s time to get your turn-based battle on. With Warlords, that is, the strategy game from Black Anvil based in a new yet comfortably familiar fantasy setting.

As you and your regiments attempt to retake Dunmar from orcs, brigands and other nasty interlopers, you’ll find your tactical skills tested in a variety of ways. To emerge triumphant, you’ll need the kind of assistance that only Gamezebo can provide.

Well, maybe not only Gamezebo. That sounds kind of arrogant. But we do indeed have the kind of Warlords Tips, Cheats and Strategies that will help you enjoy many more wins than losses on the battlefield. Your troops will appreciate that.

Getting Around and Dropping the Hammer (a.k.a Basics of Movement and Combat) 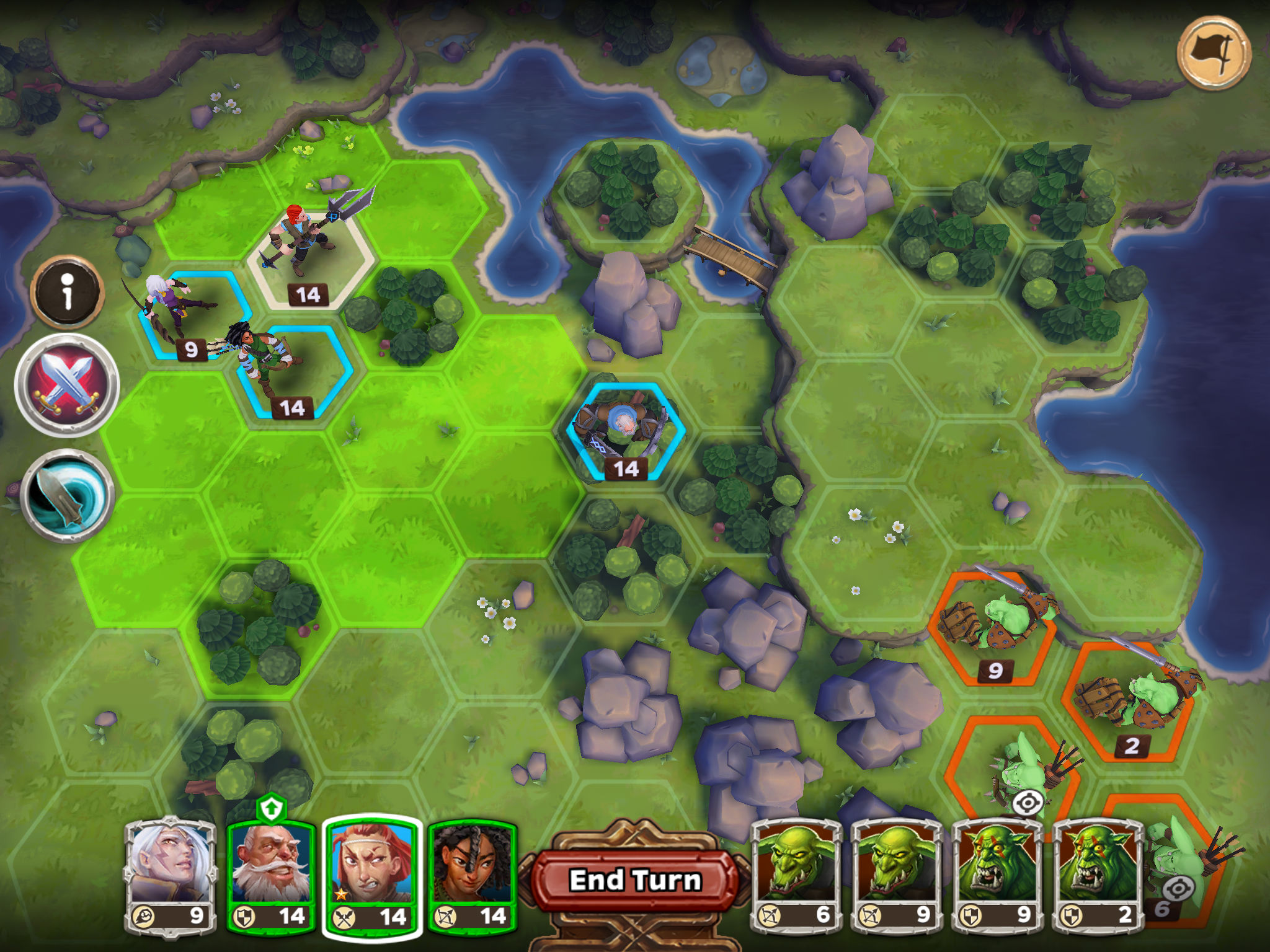 Even if you’ve never played a similar turn-based strategy game before, you shouldn’t have any issues picking up the battlefield basics in Warlords. During each turn, you’ll go before your enemy, so you never have to worry about initiative or anything like that.

Your regiments can act in any order you wish during your turn. Simply tap on one and you’ll see all the hexes it can reach this turn highlighted in green. Units have different movement speeds, and the distance they can travel is affected by terrain (which we’ll discuss in a bit), but you don’t need to worry about any of that in practice. Simply pick a green hex, tap on it — you’ll see a checkmark there when you do — then tap on it again to confirm.

If your unit is in range of an enemy, it can also attack. Melee regiments need to be adjacent to enemies to attack them, while ranged units can hit opponents that are multiple hexes away, depending on their type. Either way, you’ll see enemy units eligible to be attacked highlighted with a white border inside their hexes. To actually execute an attack, you just tap on an eligible enemy and it will instantly resolve. 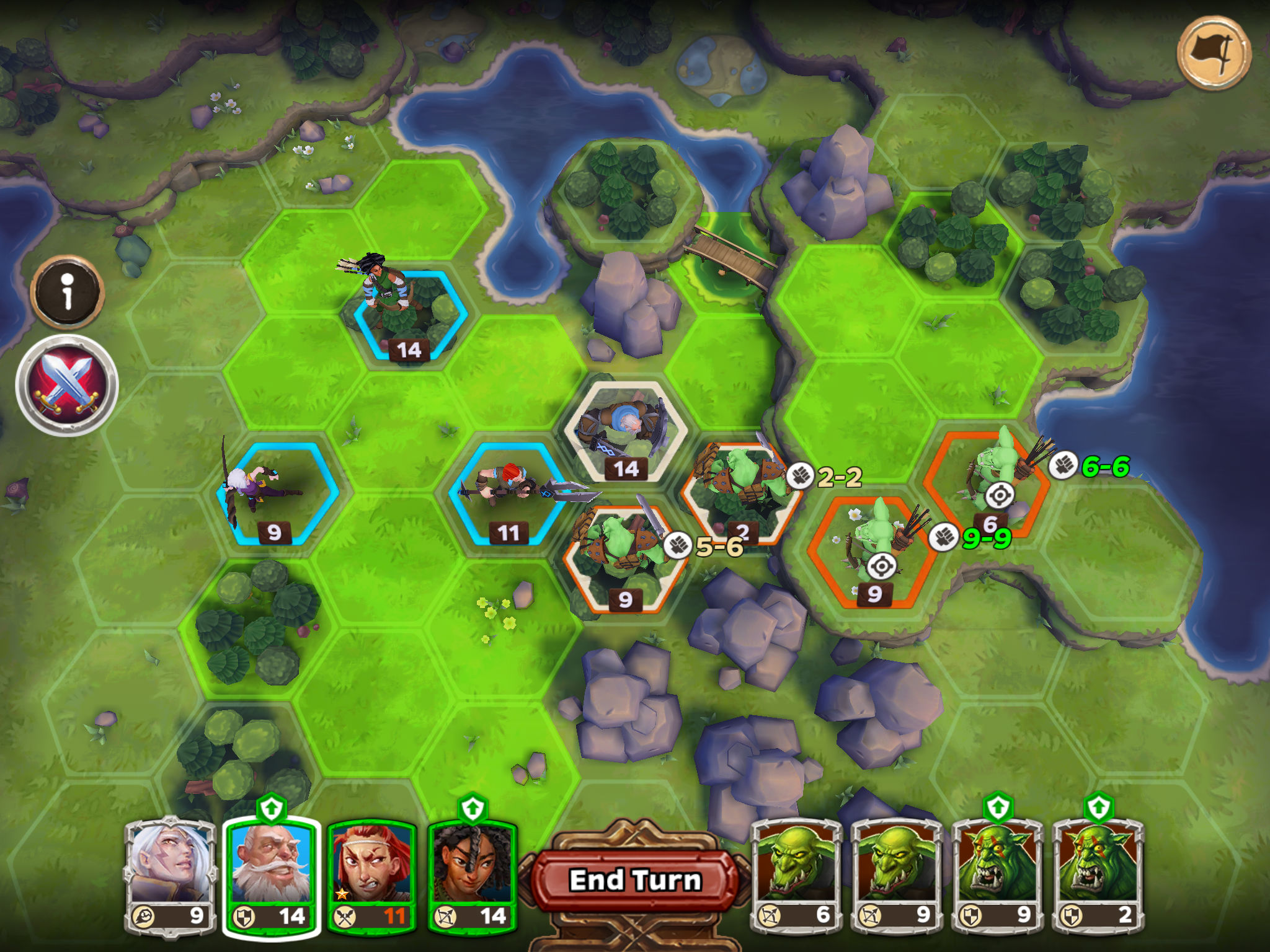 As your regiments grow in power, they will also learn special abilities they can use, activated by buttons on the left side of the screen. Using an ability is also easy: Just tap the button and a text box will come up explaining its use. Enemies within range will again be denoted with a white hex, and you simply tap on the opposing unit to carry out the ability.

It perhaps goes without saying, but the AI will do these same steps when it is the enemy force’s turn — except a lot faster, since it knows exactly what it wants to do and how to do it. Don’t be intimidated.

Things That Make You Go Hmm … (in Battle) 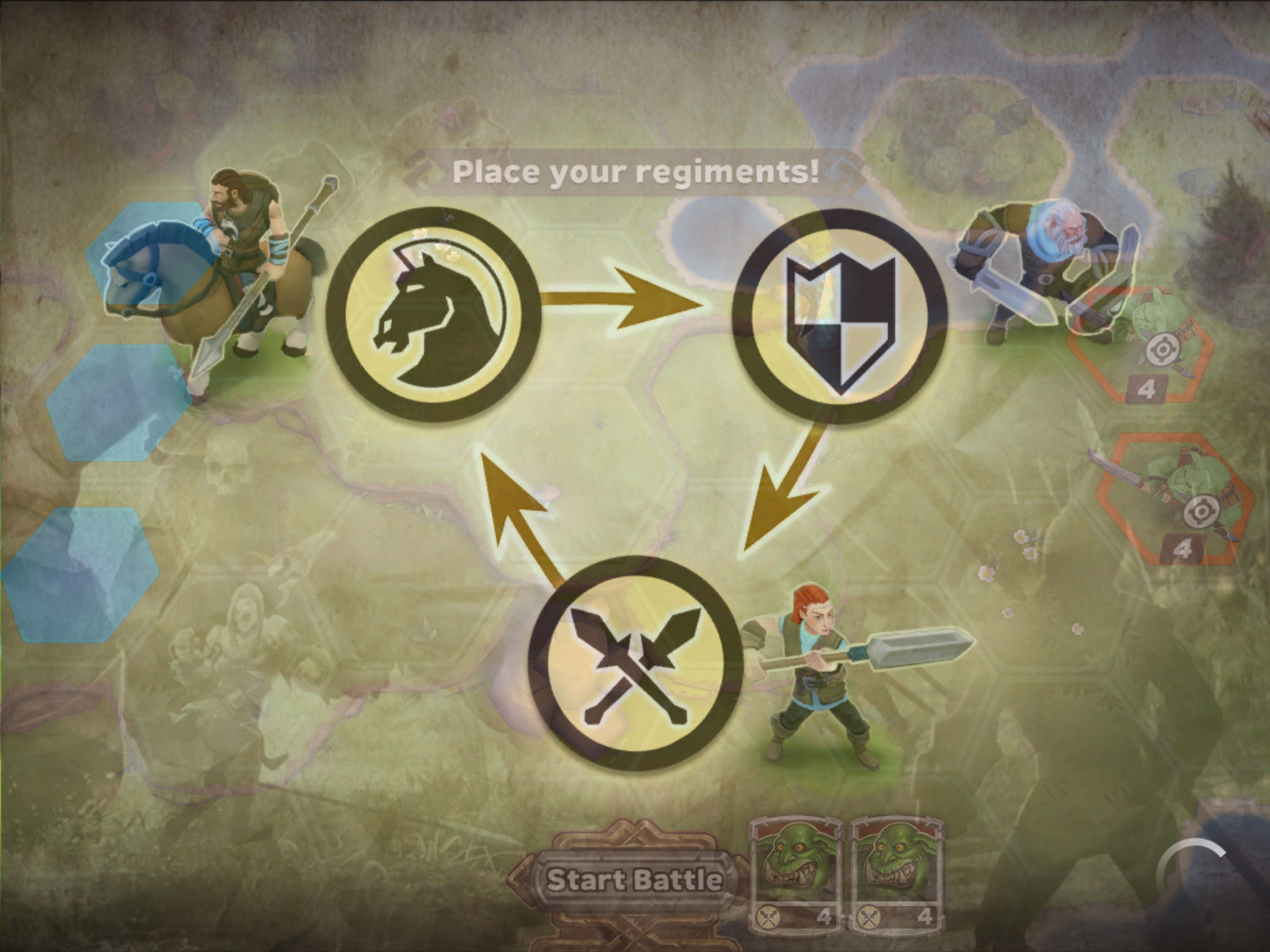 At the most basic level, the effectiveness of your attacks is based on the offense value of your regiment compared to the relevant defense stat of your target. You’ll see the number of soldiers in the enemy unit, represented by the value beneath it on the map, decrease, and if it reaches zero, the unit is removed from the battlefield.

Without scaring you about having to do a lot of math — you don’t, because the game figures all of this stuff out — there are a number of factors to consider when trying to figure out who should attack who.

Obviously, the AI is affected by these exact same factors, so you’ll want to keep them in mind both when choosing and positioning your forces at the beginning of battles (pretty foolish to bring three guardians to a fight if the enemy is mostly mounted) and when moving around the board. One general tip that can be a lifesaver is that if you can’t reach the enemy to attack right away, it makes sense to keep your regiments in forest tiles or as high up as possible to prevent the opposition from using advantageous terrain against you.

A few other terrain features are also worth pointing out. Swamp tiles stop you dead in your tracks, ending your movement for the turn no matter how many hexes you would normally have left. Water tiles can only be crossed at bridges, and units on bridges can only be attacked from either end, never from the sides (except by ranged regiments).

Cliffs prevent units from engaging in melee attacks against each other in both directions. Last but certainly not least, villages heal any unit in them at the beginning of its team’s turn, meaning enemies holed up there may require more force than usual to eradicate if you can’t get rid of them in one shot.

The Care and Feeding of Regiments 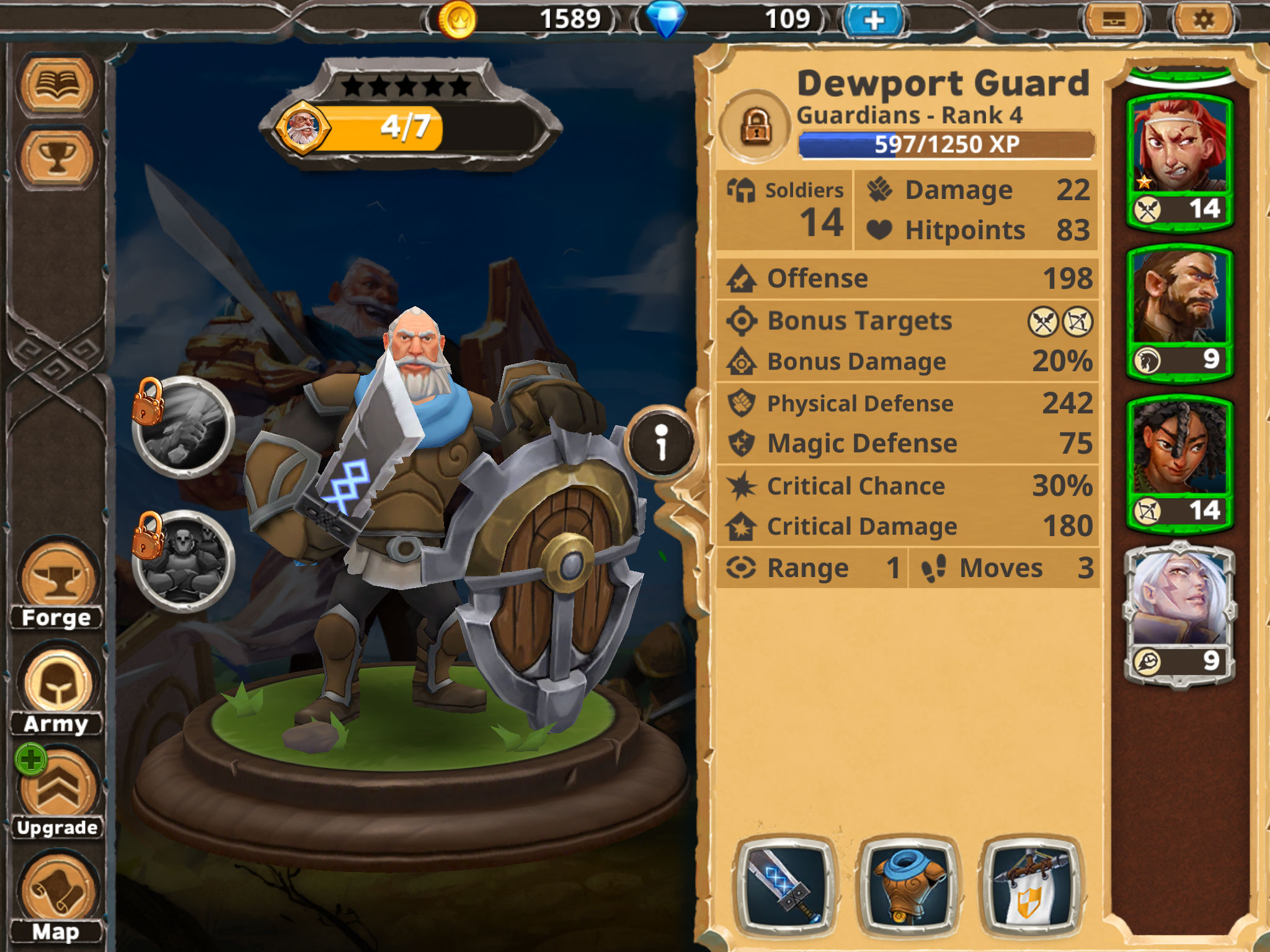 You actually don’t need to worry about feeding your troops, so you can forget that whole “army marches on its stomach” stuff. What you will want your regiments to do is get stronger, and you can improve them using several methods.

The home base for all the information on your various Regiments is the Army screen, which you access via the helmet icon in the main navigation. You can then tap on any regiment under your command to view its stats, see how close it is to promotion and examine its gear. 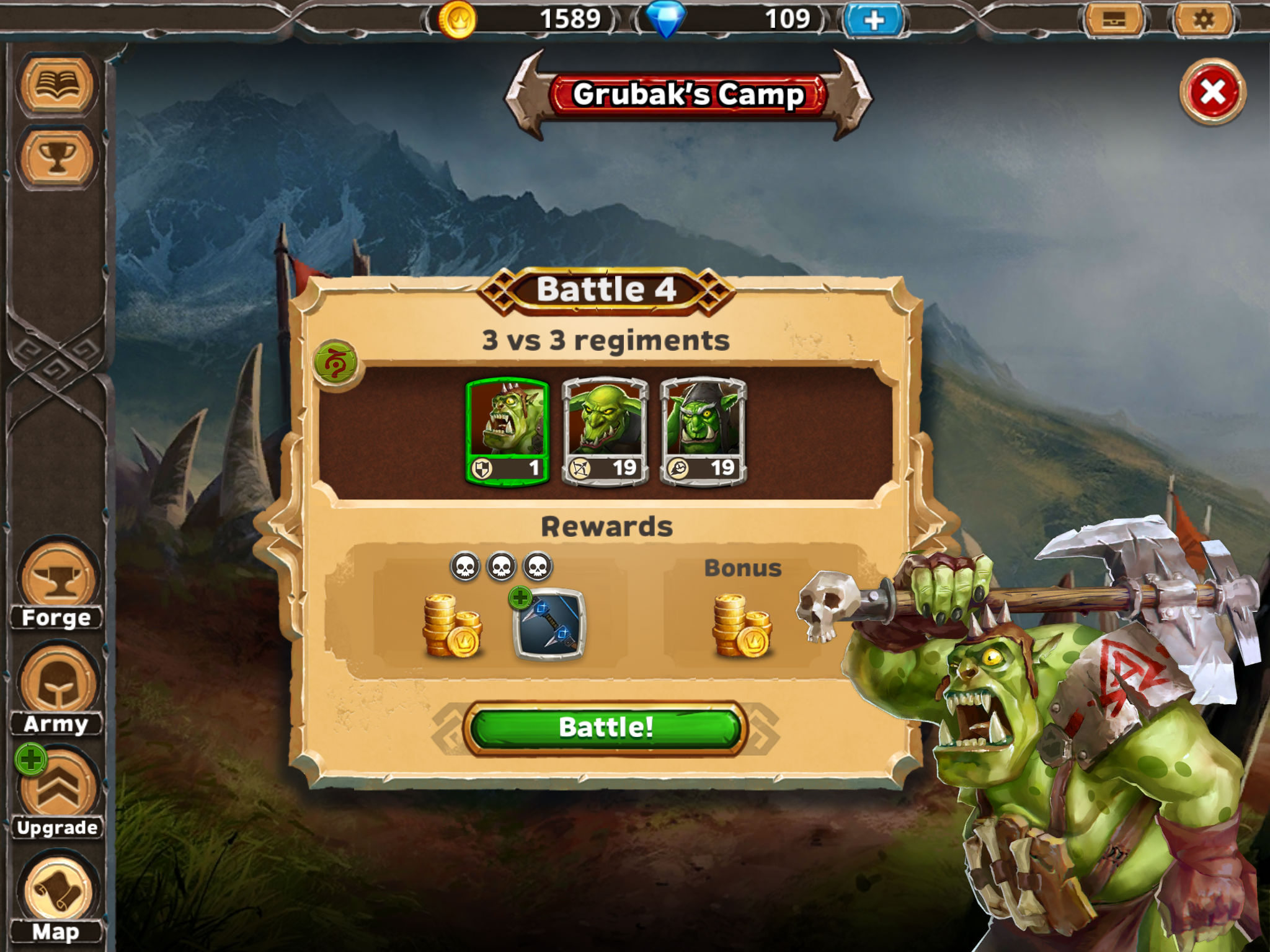 Liberating Dunmar isn’t quite as straightforward as it may first appear. While you will quickly turn portions of the map green, other parts will stubbornly remain red, or even fall back into chaos after you’ve conquered them.

The first thing you’ll encounter is a boss battle at Grubak’s Camp. As a boss, he’s especially tough to defeat, and every time he’s beaten, he’ll come back even stronger. As many players have noted in the app stores, boss battles ramp up in difficulty in almost ludicrous fashion, but the rewards for beating them are pretty good.

War Harbor is the land of PvP. Well, pseudo-PvP, anyway. As awesome as it would be to battle other players in Warlords, you’ll have to settle for going up against their armies in this portion of the map. You’ll recognize these battles by the crossed swords icon above them; winning trophies in PvP will move you up the seasonal leaderboard to earn you extra rewards when the season ends.

A different kind of challenge awaits once you’ve unlocked Brigand Island, where Jerrika awaits with her legion of Brigands. It costs coins to start an assault there, and the idea is to clear out as many levels as possible within the time limit. You’ll also see wandering Brigands retake portions of the regular map you’ve already cleared, so you’ll be seeing these folks a lot. 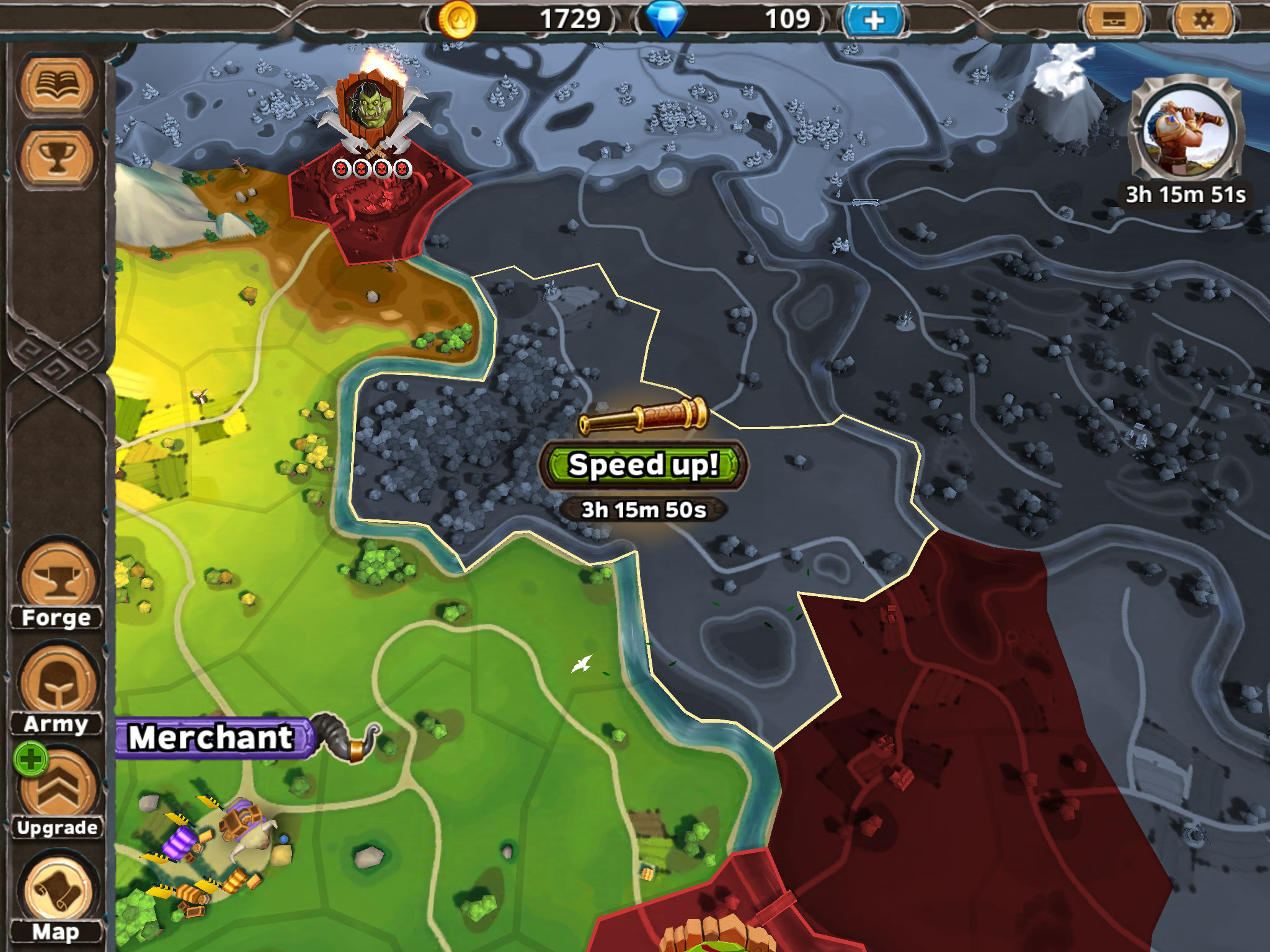 Before you set out to show the world what a great Warlord you can be, here are a few final things to remember.