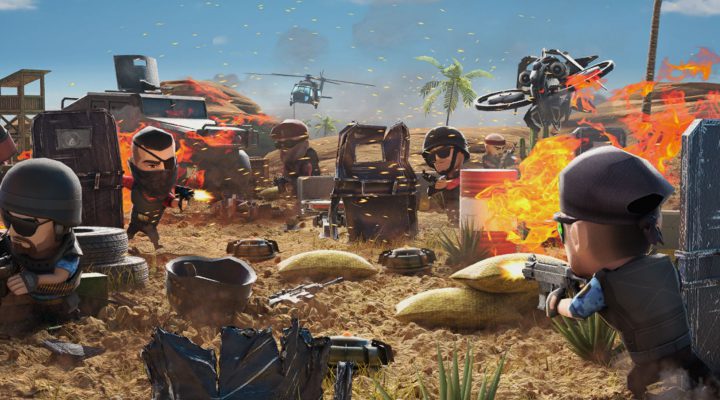 Do you like the idea of shooters, but you’re not so fond about the need for razor sharp reflexes and the memorization of every nook and cranny on huge game maps? WarFriends might be the game you seek. EA Chillingo and About Fun have come up with a tactical shooter that keeps quick reactions important, but marries them to a point and shoot system that anyone can learn. At the same time, thinking fast is equally important, both to deploy troops to help your soldier in frantic PvP battles and to eliminate threats on the opposing army as quickly as possible.

As G.I. Joe once told us, knowing is half the battle, so we’re here to provide that half with our WarFriends Tips, Cheats and Strategies. Read up and you’ll be more ready than ever the next time you take the virtual battlefield.

The Basics: Tap, Hold and Swipe 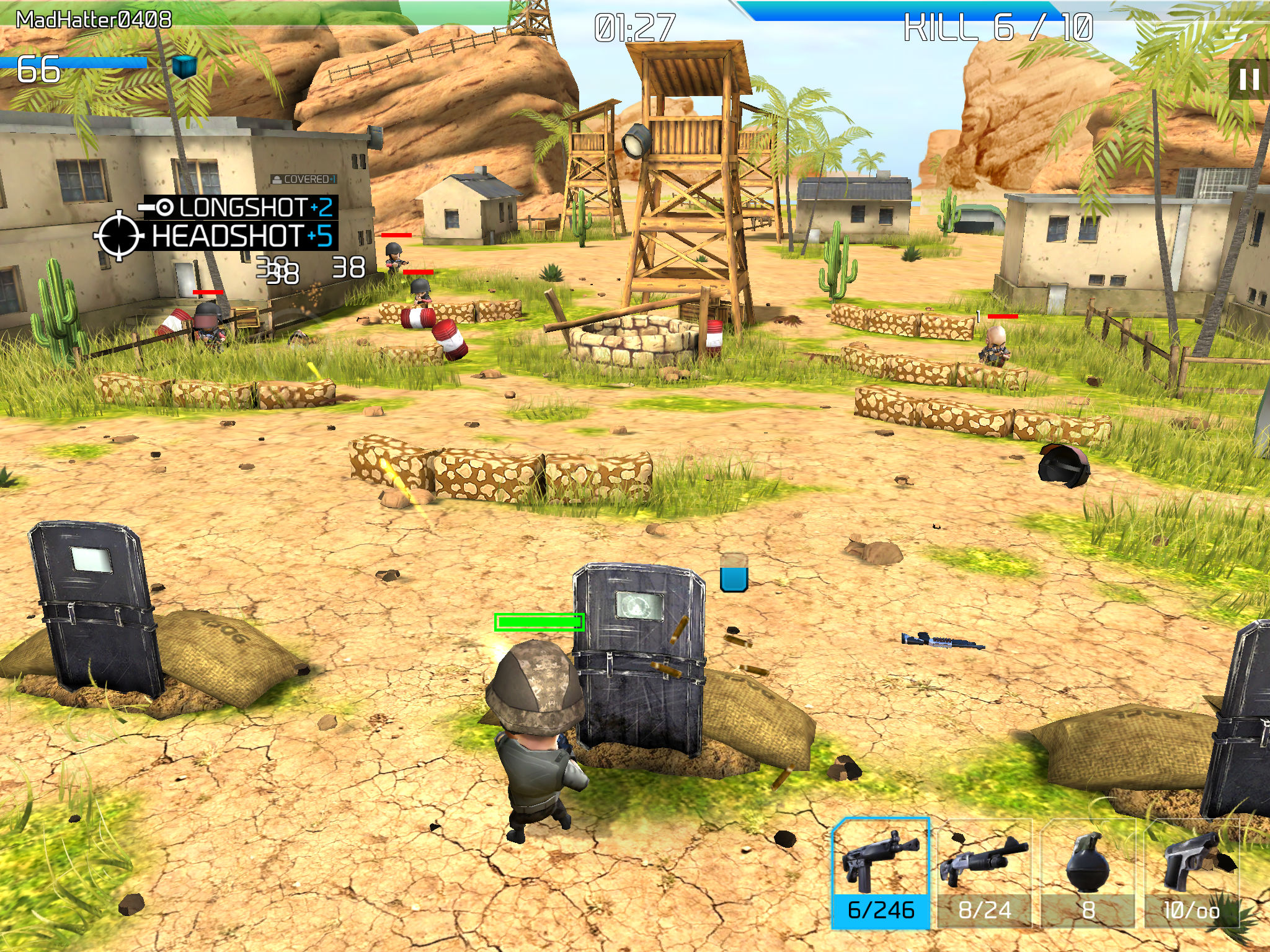 Basic competency in WarFriends doesn’t require all that many skills. The movement and shooting mechanics for your soldier are all pretty straightforward and use very basic gestures.

To move between the four shields on your side of the map, simply swipe left or right. You can change direction at any time by swiping the other way by swiping the other direction too. Note that you’re completely exposed when between shields, and more or less safe (though not invincible, as we’ll discuss) when you’re behind them and not firing.

You can fire your weapon simply by tapping where you want to shoot. Holding down on the screen will activate your scope, allowing for more precise shots that are helpful for taking out more distant enemies, drones and the like — but doing so often leaves you exposed longer. You can even fire while on the move between shields.

Grenades and other explosives are a little different. For those, you’ll need to swipe toward where you’d like them to land/target. This takes some practice but still isn’t very hard once you’ve got it down.

All four equipped weapons are displayed with icons in the bottom-right corner, showing you how much ammo each has left before you’ll need to reload and how much total ammo remains for the current battle. Your soldier will automatically reload when he’s out, but you can force a reload at any time by tapping on the icon. That’s the same way you switch between weapons too, and the process is almost instant.

Weapons: Your Tools of the Trade 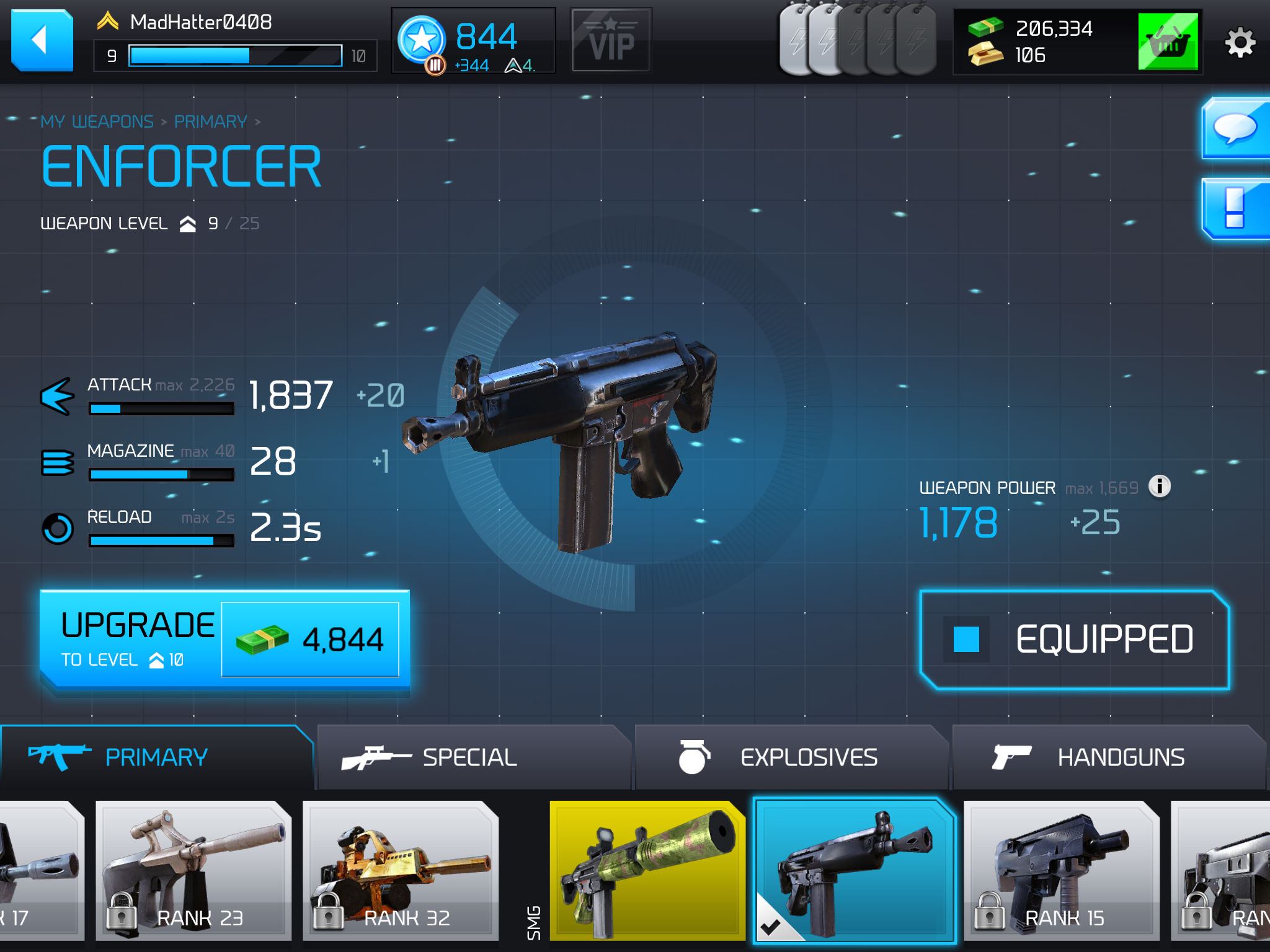 As you advance in WarFriends, you’ll have some options when it comes to weapons. Not only will better versions of the guns and explosives you start with unlock, but you’ll have some choices in terms of categories as well. Let’s take a look.

These are the weapons you’ll use most often — hence the name! When you’re just starting out, you’ll have an Assault Rifle, but you’ll later be able to choose an SMG or LMG instead.

What’s the difference? LMGs have the biggest magazines, holding nearly twice as many bullets. The tradeoff is that they are slow to reload. SMGs have the smallest magazines but the fastest reload times, and Assault Rifles are in the middle.

Accuracy vs. crowd control is the big question when it comes to special weapons. The Sniper Rifle is excellent at making accurate single shots, while a Shotgun can damage several enemies with one shot but is more or less useless at range. Both can be very effective depending on your preferred play style.

Your sidearm is a last resort, and the only thing you can do is to get a better pistol as you move up the ranks. On the plus side, they never run out of ammo, so there’s that.

Know Your Friends and Foes 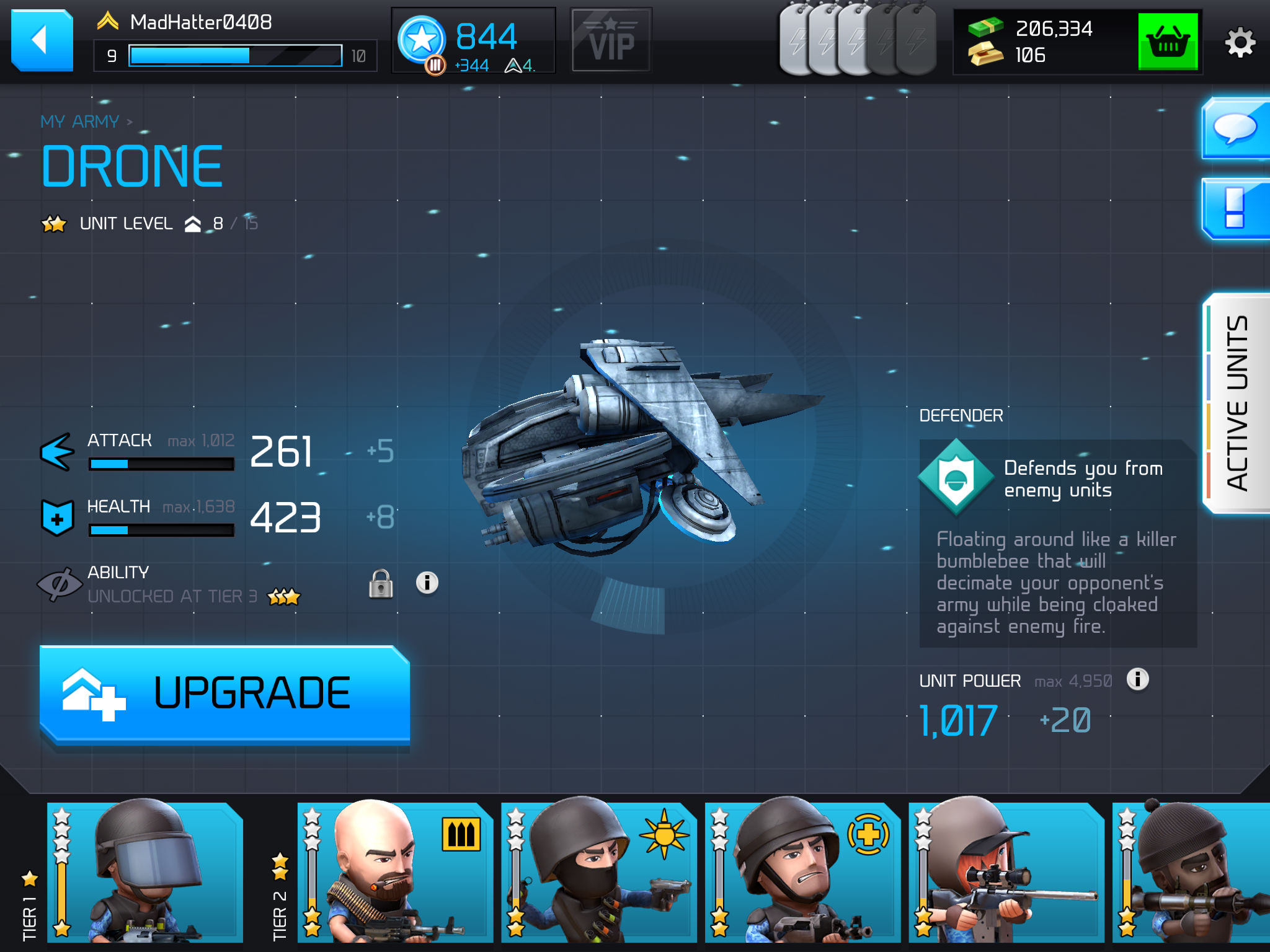 Going it alone is no good, even in a 1v1 game like WarFriends. Good thing you’ve got an army behind you … though your opponent does too.

While you’ll have the opportunity to earn and use many different types of army units if you stick with the game, they can be broken down into four types.

Deploying troops is done by tapping their picture in the bottom-left corner of the map. The game will automatically deploy soldiers for you if you’re busy shooting or hiding, but it’s better to deploy them yourself whenever you’re able instead of leaving things to chance.

Perhaps the most critical thing to keep in mind is that you earn more energy to deploy troops by destroying members of the enemy army. So while the opposing soldier is your primary objective, it often makes sense to kill off his or her soldiers so you can field more of your own.

Warcards: What Are They Good For? 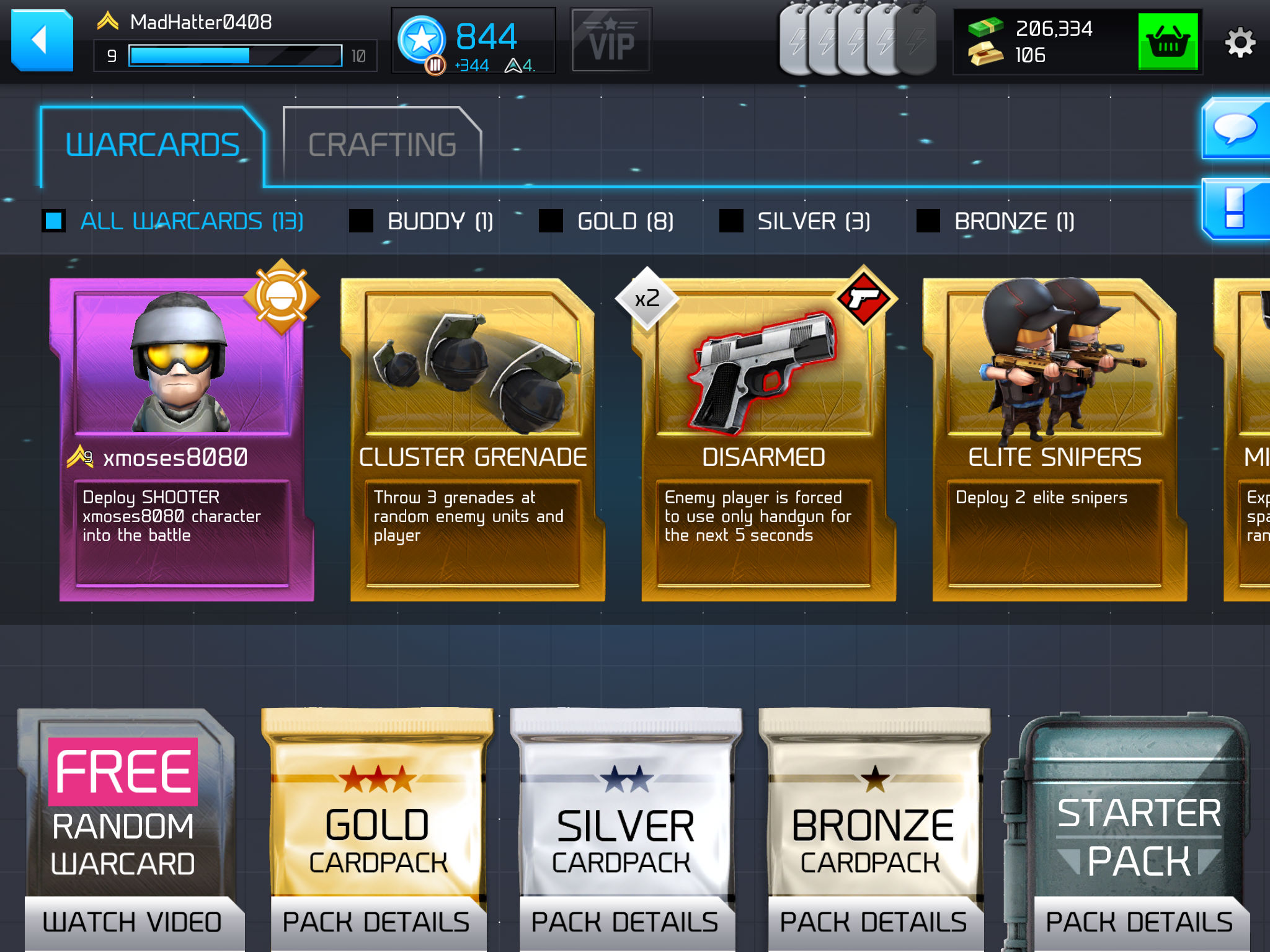 Not absolutely nothing, that’s for sure. Warcards are one-time boosts, units or effects you can play during the heat of battle to give yourself an edge. They come in bronze, silver and gold rarities, and you can acquire them in various ways:

A discussion of every Warcard would warrant its own article, but the number one thing to keep in mind is that cards can only be played once, and once you use them, they’re gone. Thus, it makes sense to play them only if they would truly turn the tide of battle. A lost cause isn’t worth a gold Warcard being thrown away, and many battles can be won without playing them at all. 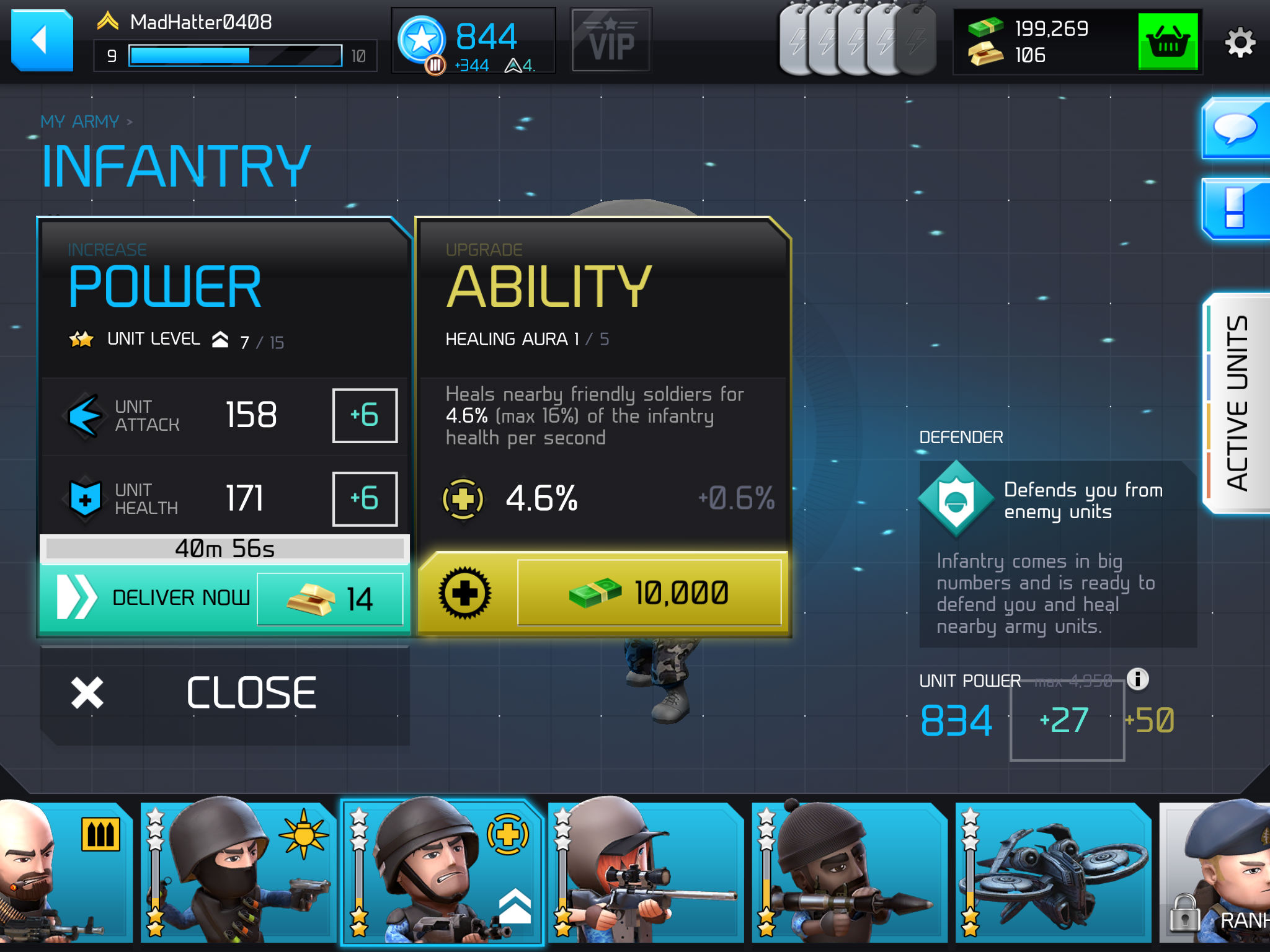 You’ll learn quickly that WarFriends is a game of many wait timers. There’s a limit on how many battles you can play in one session, represented by your number of dog tags. As well, any time you need to upgrade a weapon or troop type, you’ll have to either wait a bit or pay Gold to rush it.

Despite that unpleasant reality, you’ll want to be upgrading something at all times. If you’re planning on playing regularly, you should have a weapon and an army unit in the process of upgrading every time you log out, as they should be finished with the process by the next time you play.

It only takes Warbucks, the game’s standard currency, to make your weapons and units more powerful, and you’ll earn enough of them in the course of normal play to fuel your upgrades with little trouble. Just do it. I think I saw that in a sneaker commercial once.

Your Best Strategy: Doing the Opposite 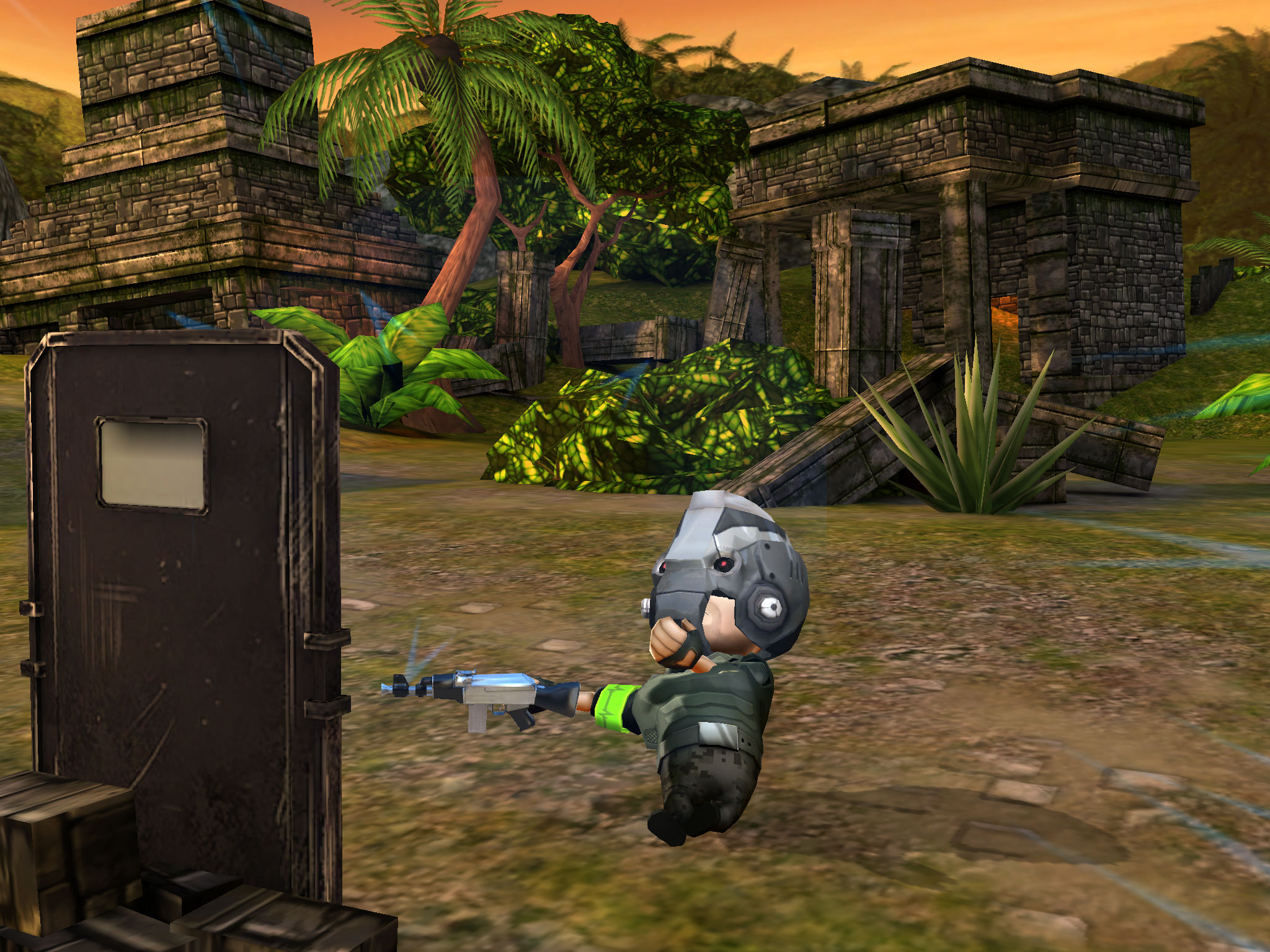 One of the best parts about WarFriends is that there’s no single way to win every battle. Each one is different, and the composition of your opponent’s army and how powered up his or her weapons are compared to yours can dictate how you fight (or make things nearly impossible in some cases, if they hold advantages over you in every area).

There is, however, one overall philosophy that can help you in any battle, and that’s to do the opposite of what your enemy is doing. If the opposing soldier is concentrating on eliminating your troops, give them plenty to shoot at and focus your own fire on them when they pop out from behind their shield.

If the enemy seems to be taking aim mostly at you, stay mobile and make killing their army your main concern. Use the extra energy to deploy more of your own troops and you might be able to overwhelm them with sheer numbers, even if you rarely fire directly at them at all.

It’s not exactly Sun Tzu, but keeping this opposite theme in your head can help you squeeze out a few more victories even when the numbers suggest your opponent should win. Good luck out there, and remember that in overtime, there are no shields. Words to live by.

How to Play My Talking Hank