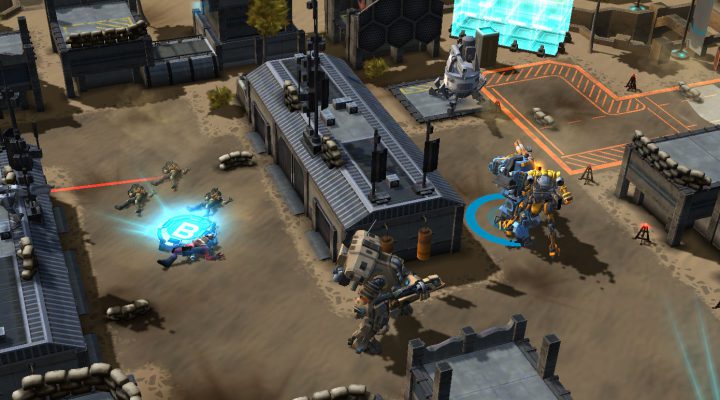 Prepare for Titanfall … on your phone or tablet. Respawn has joined forces with Nexon M to bring the hit console franchise to life in a brand new way in Titanfall: Assault, a game that very much requires fast reflexes but also serves as a test of your strategic thinking as you go head to head with another player using units, burn cards and yes, Titans to win the day.

Still, resources are scarce out on the Frontier, so you can’t just go charging into battle without a plan. We’re here to give you one with our Titanfall: Assault Tips, Cheats and Strategies, allowing you to battle your way up the ranks and become a commander whose name is known throughout the Titanfall universe. 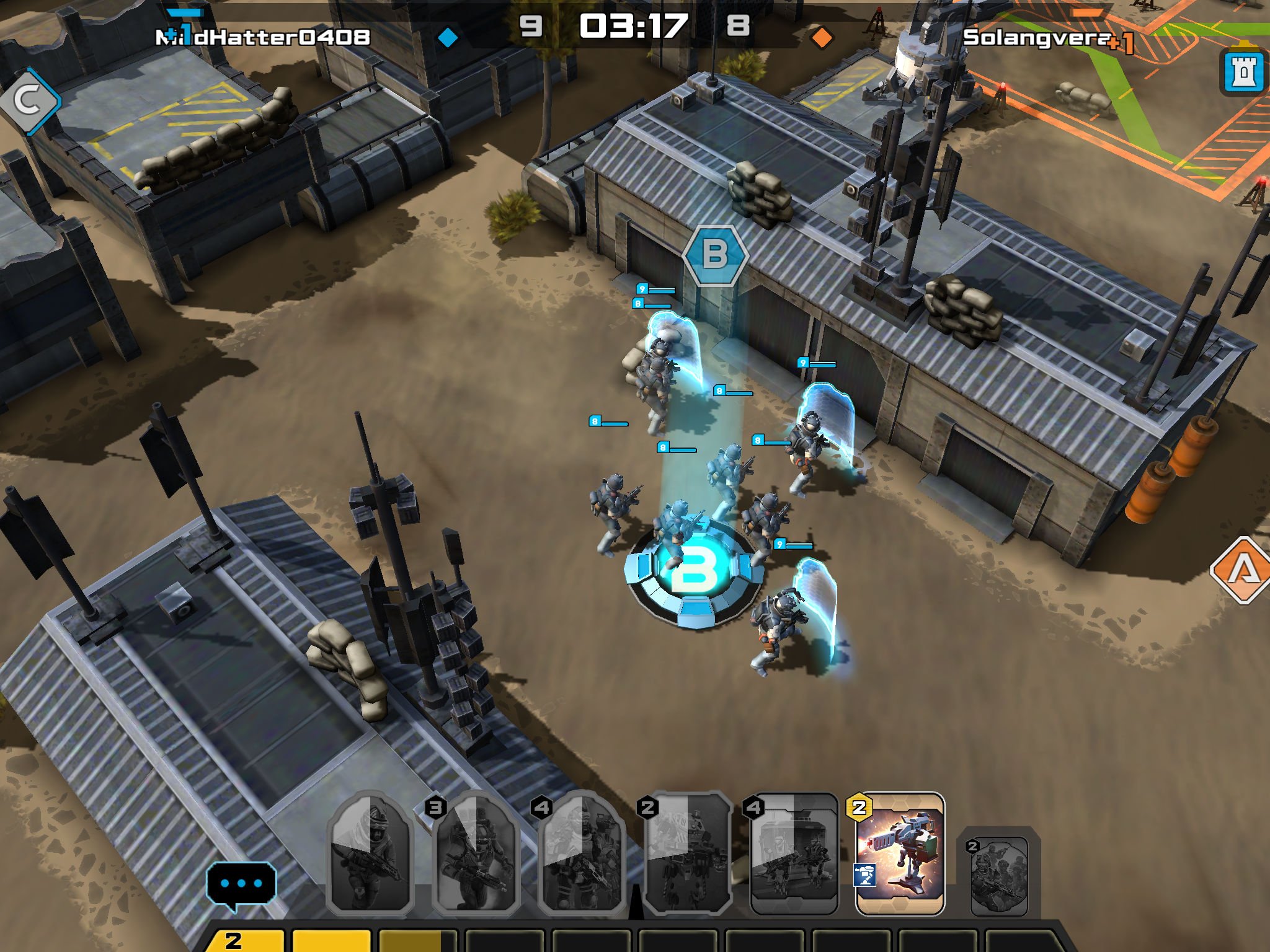 Victory in Titanfall: Assault can be achieved in two different ways. The more direct and intuitive way is to destroy the large turret that protects your enemy’s base. It can take some punishment and dishes it out to your forces as well, but blowing it up instantly ends the game.

In practice, and especially early in your Assault career, you’ll see many matches ended by whichever commander can take and hold the various Hardpoints on the game map. Every second you hold onto a Hardpoint gets you points, and if you get to 100 points before the other player, you’ll win the match even if both bases are standing. There’s also a time limit, so the scores determine who wins if neither victory condition is satisfied before time expires.

The wrench in any effective strategy, though, is that not every unit at your disposal can take or hold Hardpoints. Titans, for example, can clear away enemies defending Hardpoints, but they can’t free them from their control or place them under your own. The key is to make sure your squad has enough Pilots and Burn Cards to make both victory conditions viable.

Bonus Tip: Do What Your Opponent Doesn’t

It’s definitely possible to rally from an untenable position in a Titanfall: Assault Match. Is your base under direct attack? Maybe your opponent has neglected the Hardpoints to go all-in and you can eke out a points victory before they’re successful. The reverse is also true; if the Hardpoints seem a hopeless cause, summon some Titans and see if you can destroy the enemy base.

Your Squad and You 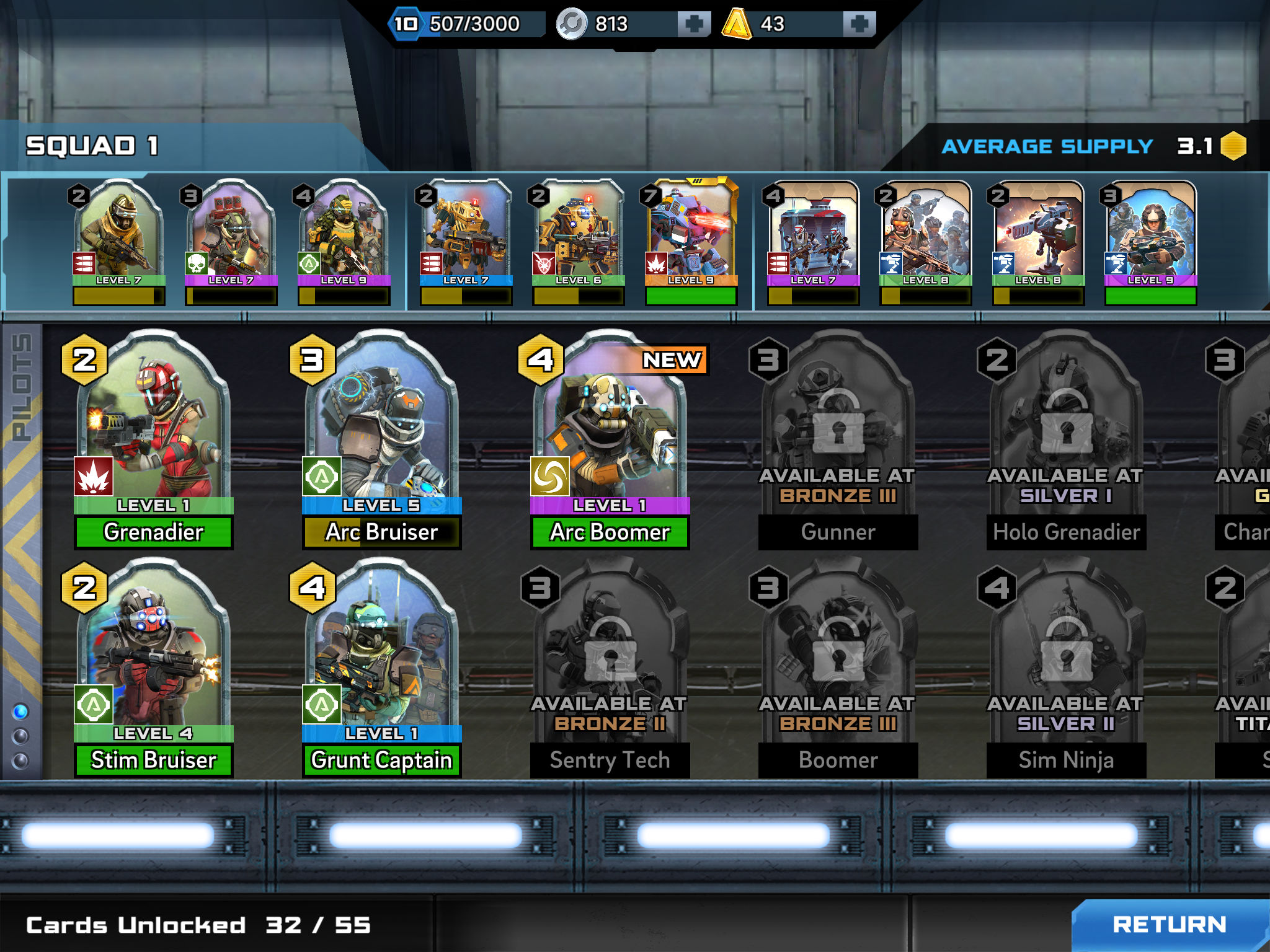 Every squad in Titanfall: Assault is actually a deck of 10 cards called a squad that you can customize as you unlock more units through the course of gameplay. However, you can’t just throw in any 10 cards, as a squad breaks down this way:

Within those three categories, you’ll uncover different rarities of cards from Common to Legendary. Rarer cards are in general better than less rare cards, but they still need to be leveled up and every card in this game has a counter or weakness of some sort, so simply stacking your squad with Legendaries is no guarantee of success.

As in other games of this type, Titanfall: Assault gives you a constantly regenerating pool of resources to play cards during battle called Supplies, and each card has its own cost. The best possible squad will have a mix of different costs, because if you simply load up on expensive cards, you’re going to leave yourself vulnerable during times you simply can’t play anything. When you edit a squad, be sure to check out the ‘Average Supply’ cost in the upper-right corner to see if you might be going a tad too expensive overall.

Of Cards and Currencies 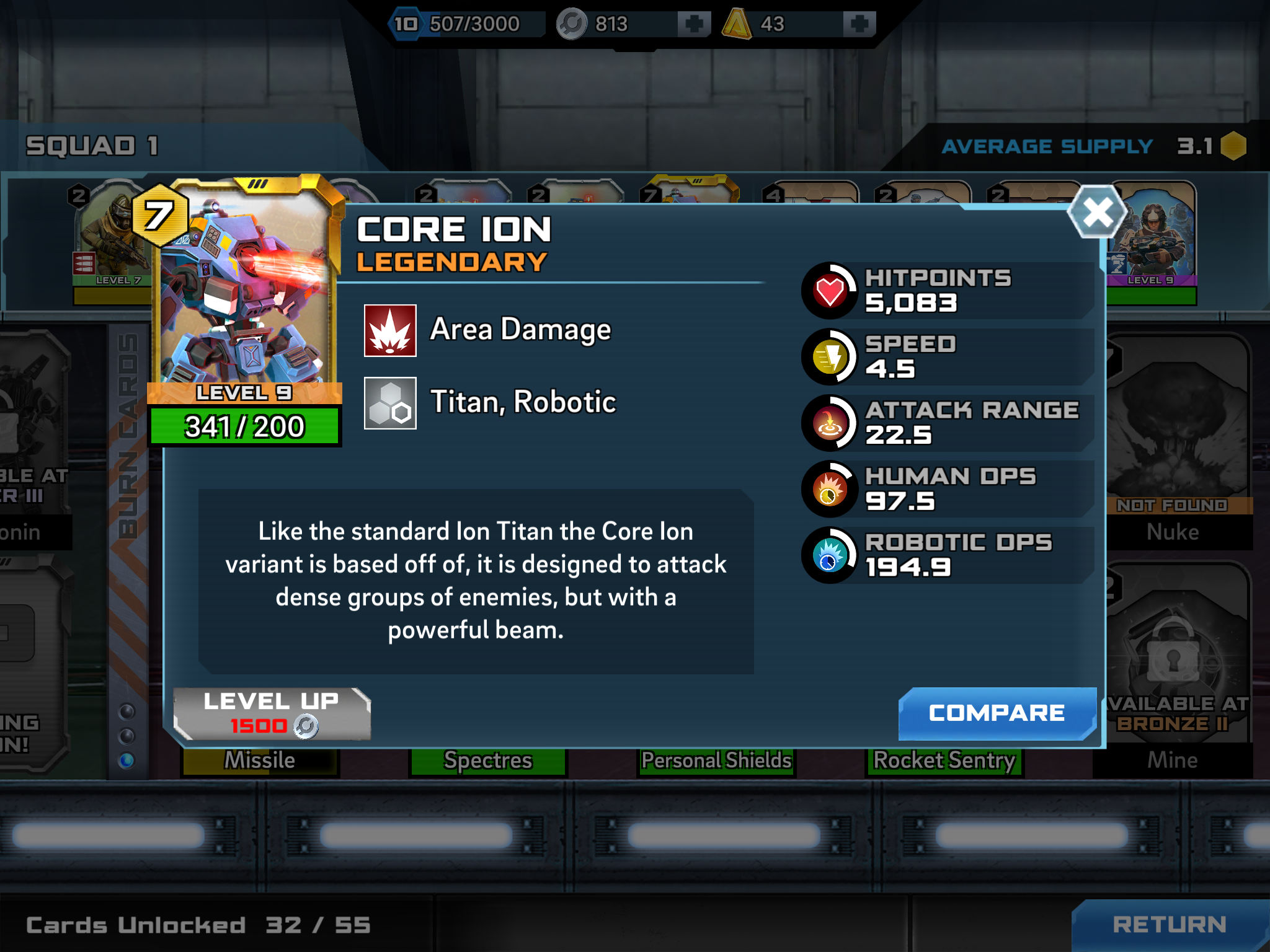 New units are great, but they don’t do your squad much good if you can’t make them stronger and more effective as you play. Happily, every card can be leveled up, but you’ll need both Credits, the game’s standard currency, and more copies of that card in order to do so.

To level up a card, simply tap on it in the squad editing screen to call up its stats. If you have enough cards to level up, you’ll see a green bar in the upper-left corner under the unit’s picture. If not, it’ll tell you how many more cards you need to collect before you can promote that unit.

The cost in Credits is shown via a button in the lower-left corner, which will have red numbers if you can’t afford it. More Credits can be found in the login reward caches, in the victory caches and can be purchased using Tokens, the game’s premium currency. You’ll win more cards using the same methods, plus you can visit the Market to buy individual copies of cards for Credits out of a selection that refreshes on a regular basis.

Counters: Not Just for Cooking

Perhaps the most important lesson to learn in Titanfall: Assault — and one better understood before learning it the hard way — is that there’s a counter to any unit an opposing commander throws at you. While raw stats are good and you should constantly be striving to level up the cards you plan on using in your preferred squads, that won’t matter if you don’t have a good mix of options to nullify what your enemies throw at you.

The best squads are prepared to deal with massed infantry, shielded or unshielded units and heavy weaponry like Titans or Reapers. Putting too many eggs in any one basket is a good way to suffer more defeats than you can rack up victories.

Does this mean playing defensively is the way to go? Not at all, and many squads are built around acting first and seizing Hardpoints quickly. But even aggressive squads need to have answers once the opponent starts fighting back, or else you can easily see an early points lead go for naught. 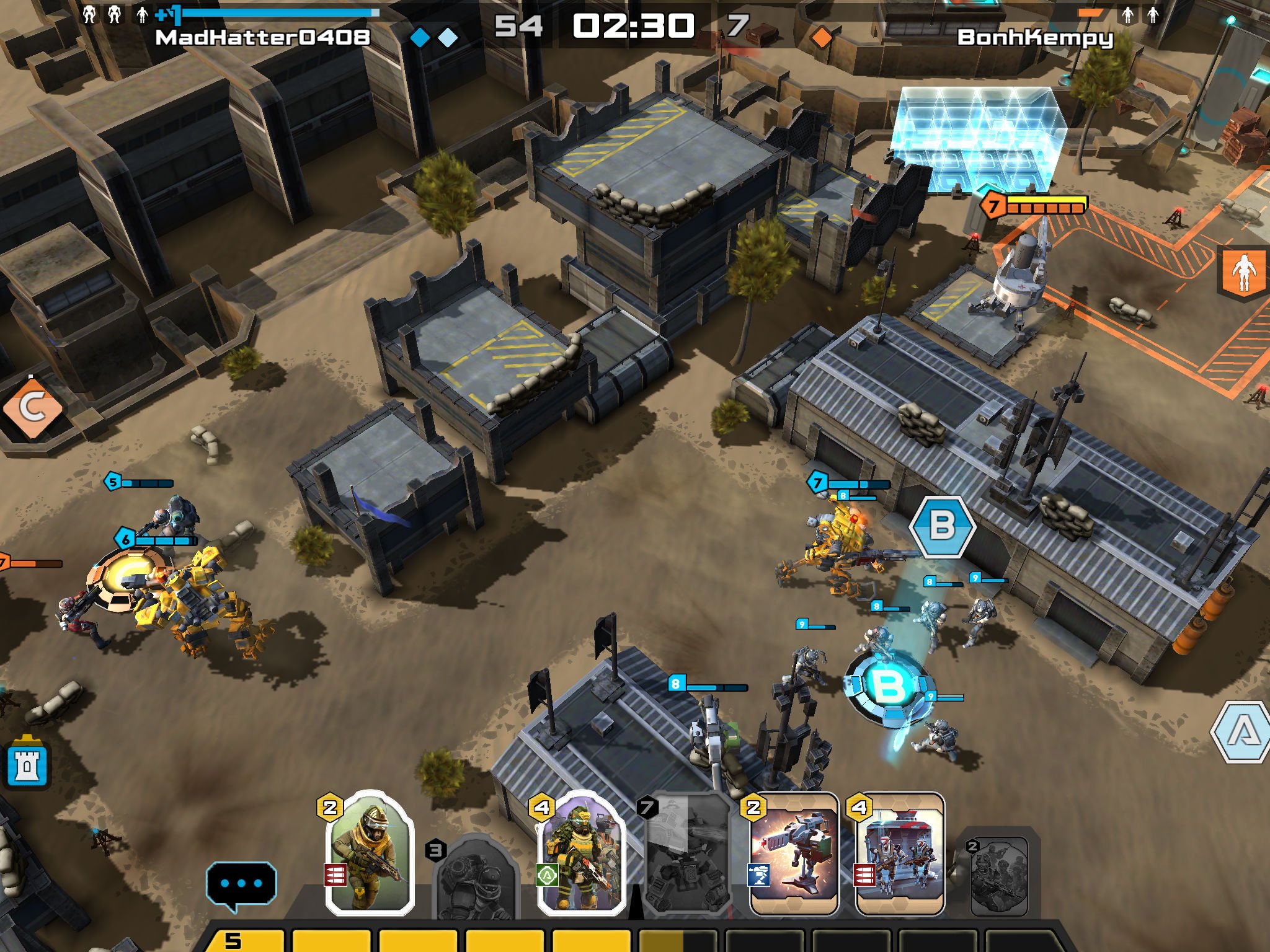 Titanfall: Assault throws you into the shallow end when it comes to maps, as the Training Grounds batlefield is about as straightforward as it gets. There are three Hardpoints, one closer to each player and one in the middle, as well as just one winding lane that Titans can take to approach the opposing base.

Once you’ve proven yourself and moved up the PvP ladder a bit, you’ll unlock new maps. Each one has a slightly different twist on what you’re used to, so make sure you understand exactly what’s going on in each one. The tactics that served you well on previous maps might not work as well everywhere, so keep that in mind.

One of the coolest parts of Titanfall: Assault is how the maps were designed to give Pilots a chance to show off their stuff when it comes to wall-running and jumping. Because of this, Pilots aren’t as restricted when it comes to getting around the map as all other units, and you can use that to your advantage by sending them places it would take your other units quite a while to access — but remember that your opponent can and will do the same. 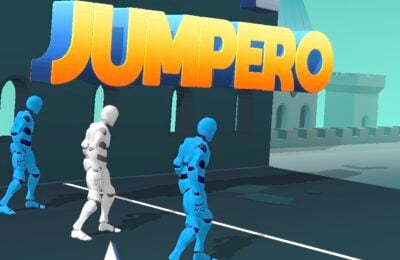