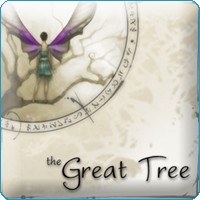 Check out our tips & tricks for The Great Tree, with in-depth explanations of attributes, power-ups and creatures along with special strategies for beating the game on Hard mode.

Here is a list of the attributes and how they work. You can adjust your attributes by clicking on the “profile” section in the main menu or at the end of most levels.

Add 1 star point to your existing strength. If you choose these set of wings it will allow you to use a star point in another area in which you may need more help.

Will allow you to still take damage but the enemy you hit will die as soon as contact is made.

Give you a 1 in 3 chance to avoid being hit by an insect. This will come in handy in levels where there are a lot of bugs at one time.

(4)Wings of the Wind

Add 1 star point to your agility attribute. If you need your star points somewhere else, choose these wings and at least you’ll still be able to fly faster.

Recharge your health slowly. This is a good set of wings because it will increase your health points as you play along and it will also allow you to take more hits.

Add 1 star point to your existing magic. This will allow you to earn more power-ups whenever you free a Swee or kill some bugs. You can never have too many power-ups in this game so adding magic points will help you finish the level faster and with a higher score.

Refill HALF of your heart when you get down to 1. You basically cannot die unless you get taken by a creature that kills you upon contact, like the spider man or the Venus flytrap.

One star point is added to each of your existing agility, strength and magic.

The dragon wings cannot protect you from him unless you kill a bug near him thus detonating the wings.