Home / Walkthroughs, Tips, Cheats / The First 3 Things You Should Do in Game of Thrones: Conquest

The First 3 Things You Should Do in Game of Thrones: Conquest 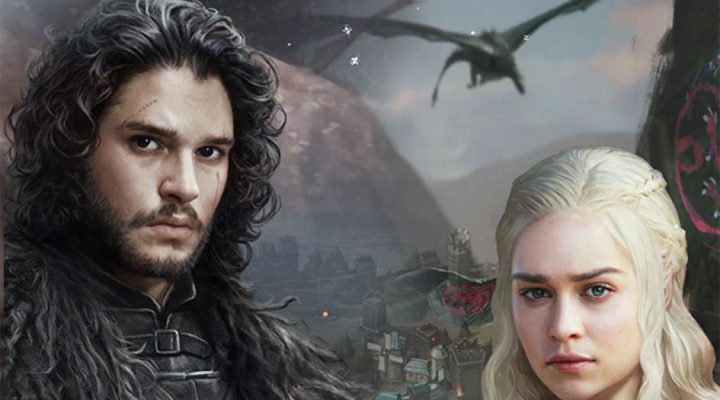 The conquest is here. Game of Thrones: Conquest, that is, the massively multiplayer mobile game that’s more than just an excuse for us to practice our alliteration, but a full fledged build and battle title set in Westeros, fictional home of the most popular TV series in all the land.

There’s a decent chance that the game will outlive the HBO series, which is preparing for its final season right now. But the journey to the Iron Throne is a long one, no matter what form of media it occupies.

With that in mind, we already have an excellent selection of tips and strategies to help you in this particular Game … of Thrones. However, if you just want a few pointers as to what you should do first, consider this the TL;DR version for beginners.

Like he said himself, Tyrion Lannister drinks and he knows things. In the specific case of Game of Thrones: Conquest, he knows exactly which things you should be doing in the right order to earn rewards that will help you advance in the game faster.

If you tap on Tyrion’s portrait near the bottom of the main game screen, it will bring up a screen that looks like this: 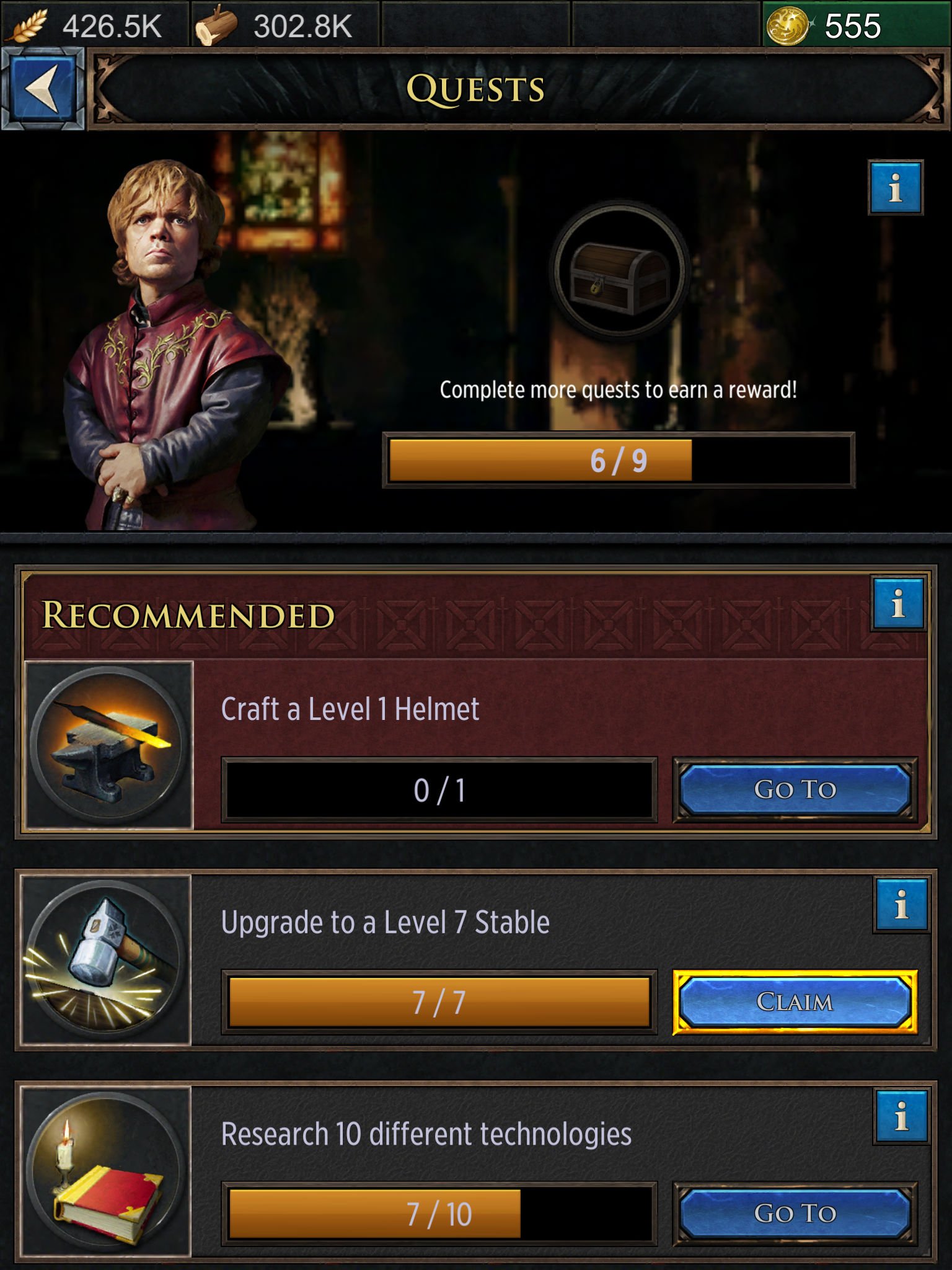 Here, you will always find a selection of Quests that can be completed to earn valuable goodies just by hitting the ‘Claim’ button once you’ve finished them. Don’t know how to get to where you need to go for a given Quest? Just tap on ‘Go To’ and you’ll be whisked right there faster than characters were getting around Westeros in season 7.

As well, Tyrion has a chest next to him at all times that will grant rewards every time you finish a certain number of quests. So while you don’t have to do what he wants you to do, it’s probably a good idea.

Make Liberal Use of Your Speed-Ups

Just like in most build and battle games, Game of Thrones: Conquest utilizes a system of timers for almost every task: building and upgrading structures, training troops, researching new technologies with the maesters, crafting gear and more. You can wait until the timer has expired to reap the benefits or spend the game’s in-game currency to finish a task instantly.

But there’s also a third way to get things done, and you’ll want to do it often when you are just starting out. Conquest gives you a whole bunch of speed-up items, including general ones that will cut time off any task and action-specific ones that need to be used only for building, research, traning, etc. If you tap on the icon that looks like an open box in the game’s main bottom navigation bar, you’ll be able to see how many of these speed-ups you have in your Inventory screen.

To use them, simply tap on the task in question and then look for the ‘Speed Up’ icon. From there, you’ll be taken to a screen with sliders that allow you to use as many items as you want. 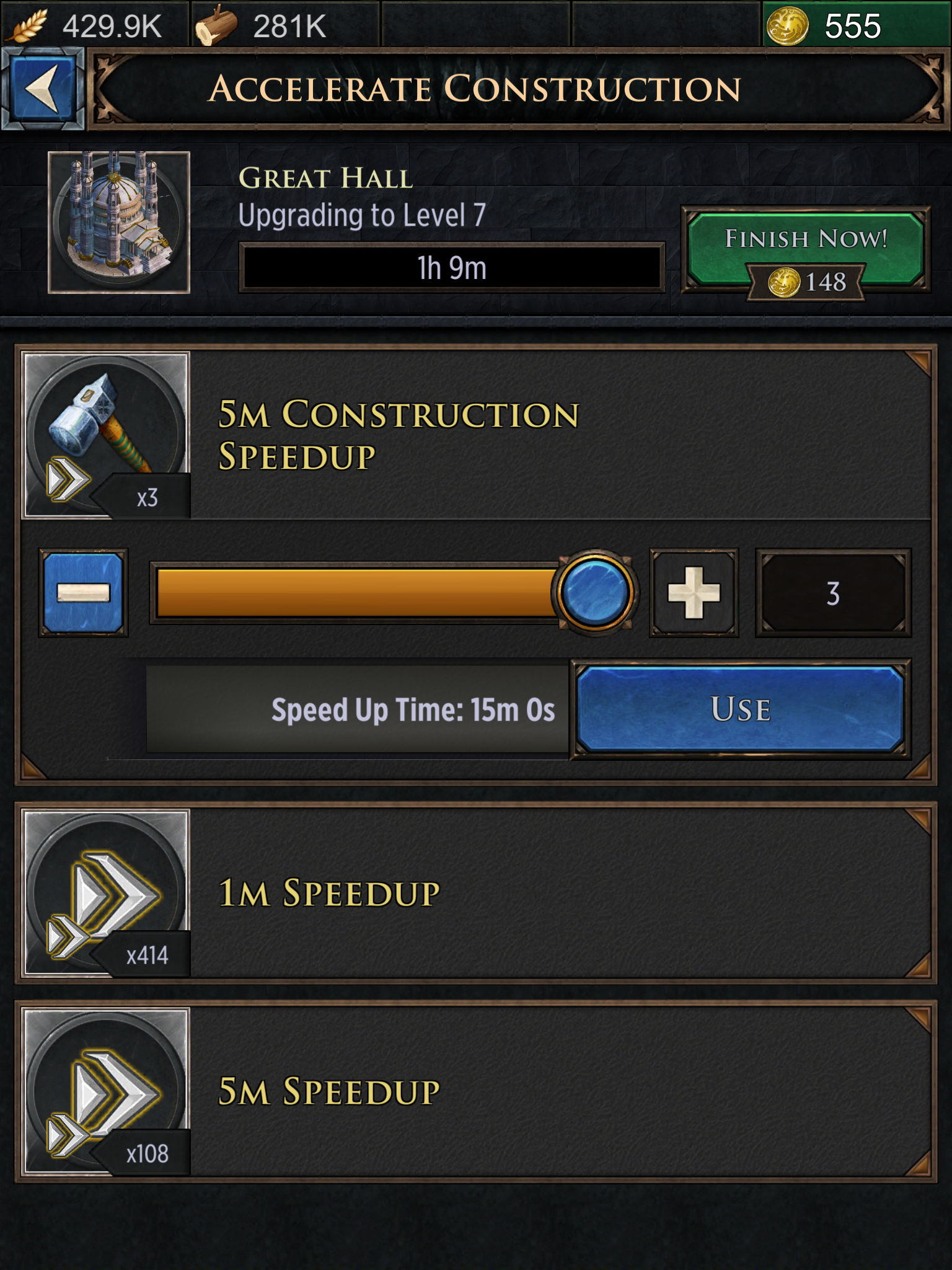 Since the wait times for tasks are relatively short in the early going and you start off with literally hundreds of these speed-up items (and will get even more if you follow Tyrion’s suggested quests like we hinted at), you should use them as often as possible to get your Keep leveled up quickly. This will give you a definite leg up on new players who are feeling their way through slowly and make you a more desirable Bannerman for more experienced players.

Don’t Attack Anyone Right Away 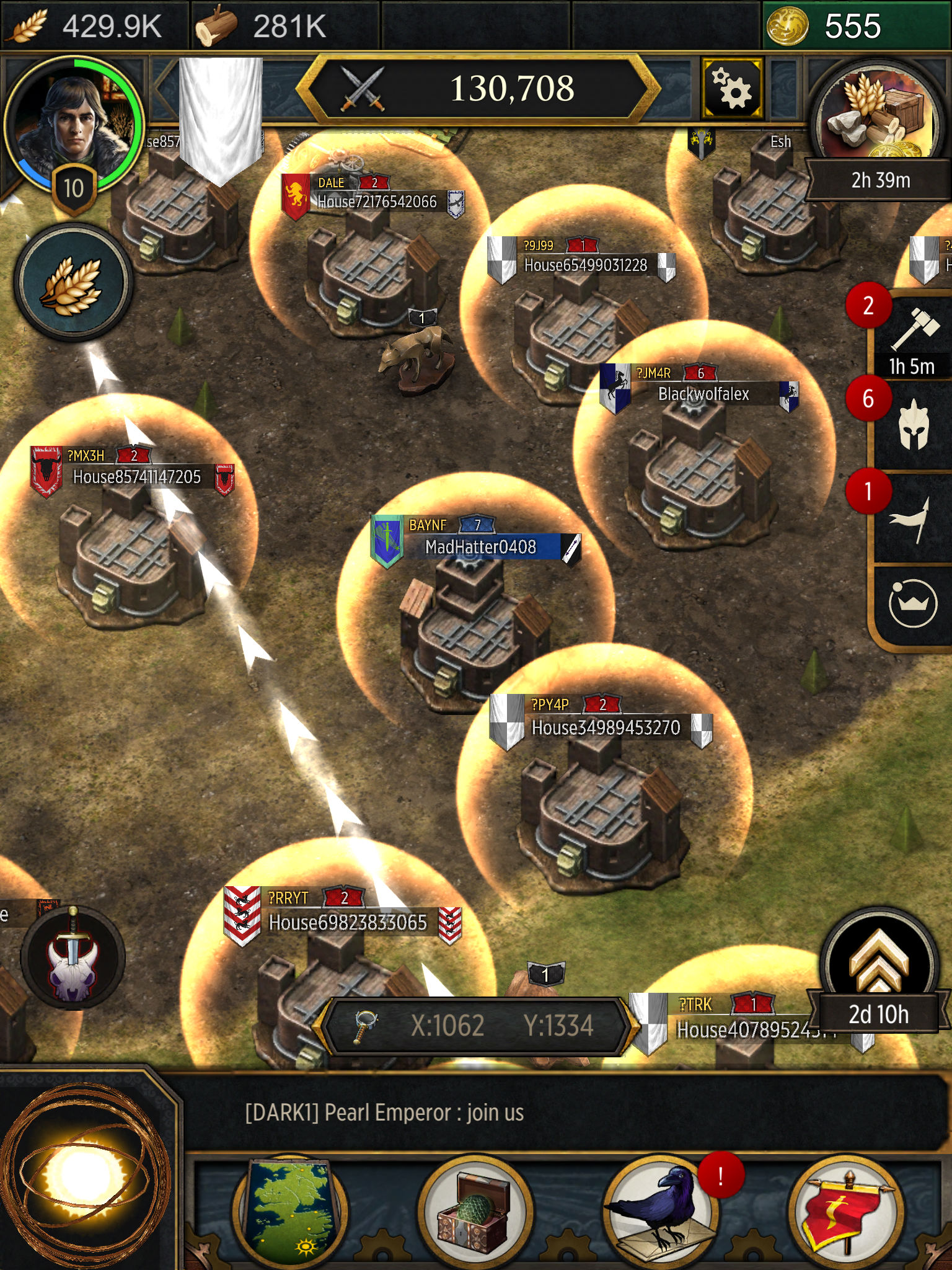 Technically, this is something you shouldn’t do, but “Two Things You Should Do and One Thing You Shouldn’t” is unwieldy and too many characters for the headline field. Or so they say.

Anyway, while attacking other players is very much part of the game and in the spirit of Game of Thrones in general, Conquest gives you a shield that protects you from raids by other players for several days. The catch, if you want to call it that, is the shield automatically goes away if you raid someone first.

There will be plenty of time for that later. Shields can be found as rewards or purchased for premium currency, but you’ll likely never be able to protect your Keep from outside assault as long as you can when you first start playing. Bide your time, build up your strength and use that first shield to the fullest, and you’ll be that much more ready to wage war in Westeros down the road.