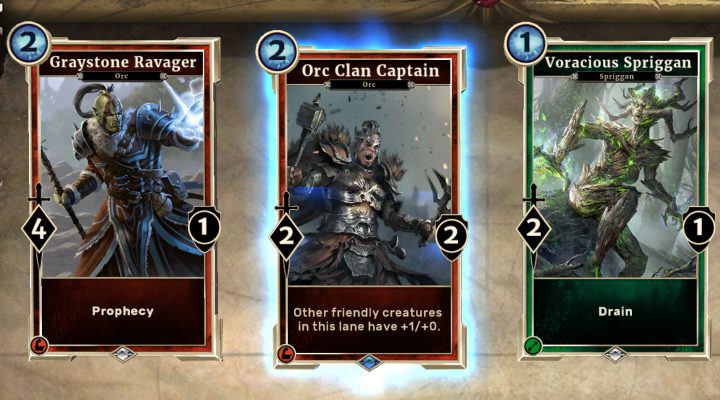 Hey, you! Yes, you. Like card battle games on mobile? How about if they’re based on really popular video game IPs and play a lot like card battlers you already know while also challenging you with some new wrinkles? Then you’re probably going to like The Elder Scrolls: Legends if you try it.

As the name suggests, Legends is a card game based on the very successful Elder Scrolls franchise, which has spanned multiple console and PC RPGs and an MMORPG. Chances are if you dig classic swords and sorcery and like video games, you’ve played some of them.

Now imagine that world mashed with a different card game from a fantasy video game brand (yes, we’re talking about Hearthstone) and you’re on the right track. And since we’d never just recommend a game and simply say “have at it” without giving you some pointers, we’re about to drop The Elder Scrolls: Legends Tips, Cheats and Strategies on you to help you on your way.

Oh, and if it isn’t obvious from the header coming up here, if you’re a card battle veteran, you can probably skip this first section.

For Card Game Newbs Only: The Very Basics 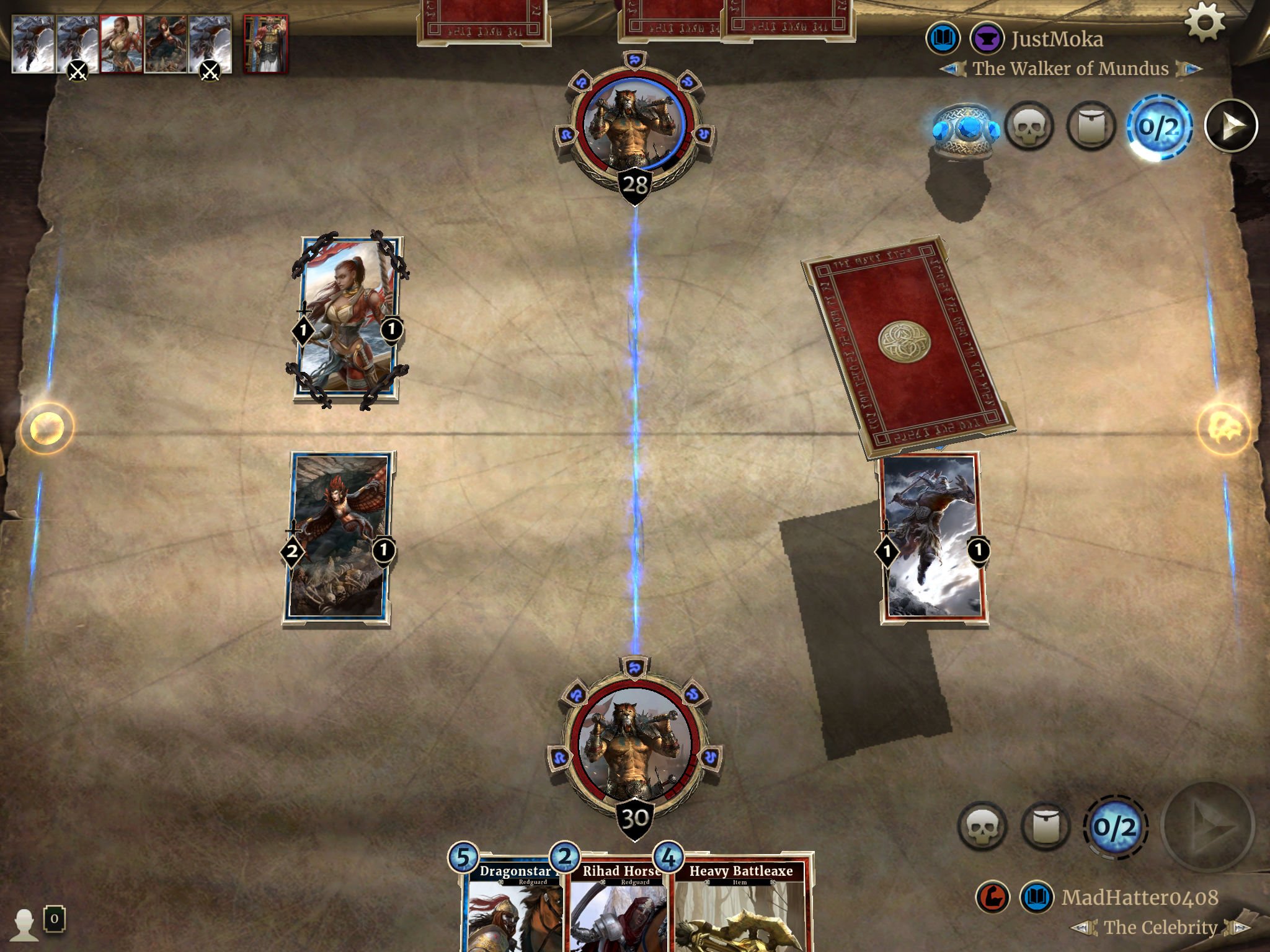 The Elder Scrolls: Legends plays out in matches between two players, either you against an AI opponent or against a live human foe. Each side has a deck of anywhere from 50 to 70 cards that include creatures, actions (like spells and other things you do to affect the game), items that can be equipped to creatures and other fun stuff. As you might expect, all of these things come right from the previous Elder Scrolls games and are steeped in the same lore, which plays out in the audio and dialogue.

Both sides in a duel are represented by an avatar and begin with 30 health, and the object is to reduce the other avatar to zero health before he, she or it does the same to you. Damage can be dealt by creatures in the playing field or by cards that do damage directly when played from your hand, and there are numerous ways to modify the damage.

At the beginning of a match, one side is chosen at random to go first. On the first turn, the initial player starts with one magicka, which is the energy that fuels your cards. To compensate, the side that goes second receives an artifact called a Ring of Magicka that can be tapped once per turn, three times during a duel to grant one extra point of magicka. On every turn, both sides get one more magicka than the turn before, so on the fourth turn, both sides begin with four magicka — though this, too can be modified by the text on certain cards.

When it’s your turn, you can do the following actions in any order you wish:

Like we said, those are the very basics. There’s a lot more to learn, starting with …

Staying in Your Lane 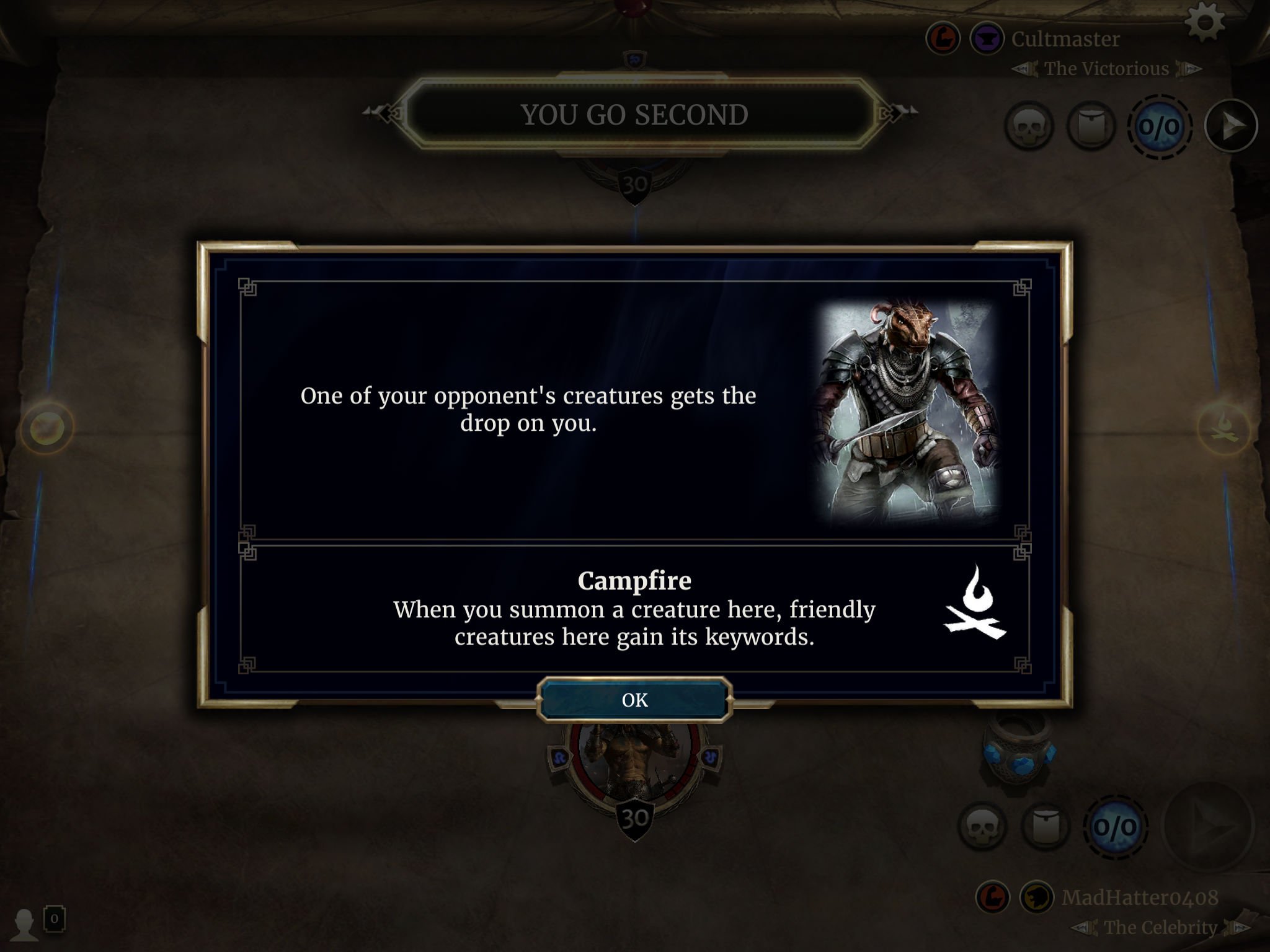 One of the ways The Elder Scrolls: Legends differs from most other card battle games is that the playing field for most matches is divided into two lanes. In standard matches, these lanes have two very different effects.

Cards can’t switch lanes under normal circumstances, so deciding where to play your creatures adds an extra layer of strategy you won’t find in many other games in this genre. It means that sometimes you’ll have an impressive force built up in one lane but be quite vulnerable in the other, so if you favor a defensive play style, you’ll need to ensure both lanes are locked down. Conversely, if you prefer aggressive tactics, you can sometimes still get something done in one lane when your opponent has built up a strong defense in the other.

Some duels in Story mode and the Arena have special lanes you won’t find in normal matches. We’re not sure we’ve played enough to see them all, but here are a couple:

Be sure to hold down the symbols on each side of the board to check the lane rules just to be sure you’ve got them down. because they definitely can impact the outcome of a match.

Keywords: Not Just for SEO 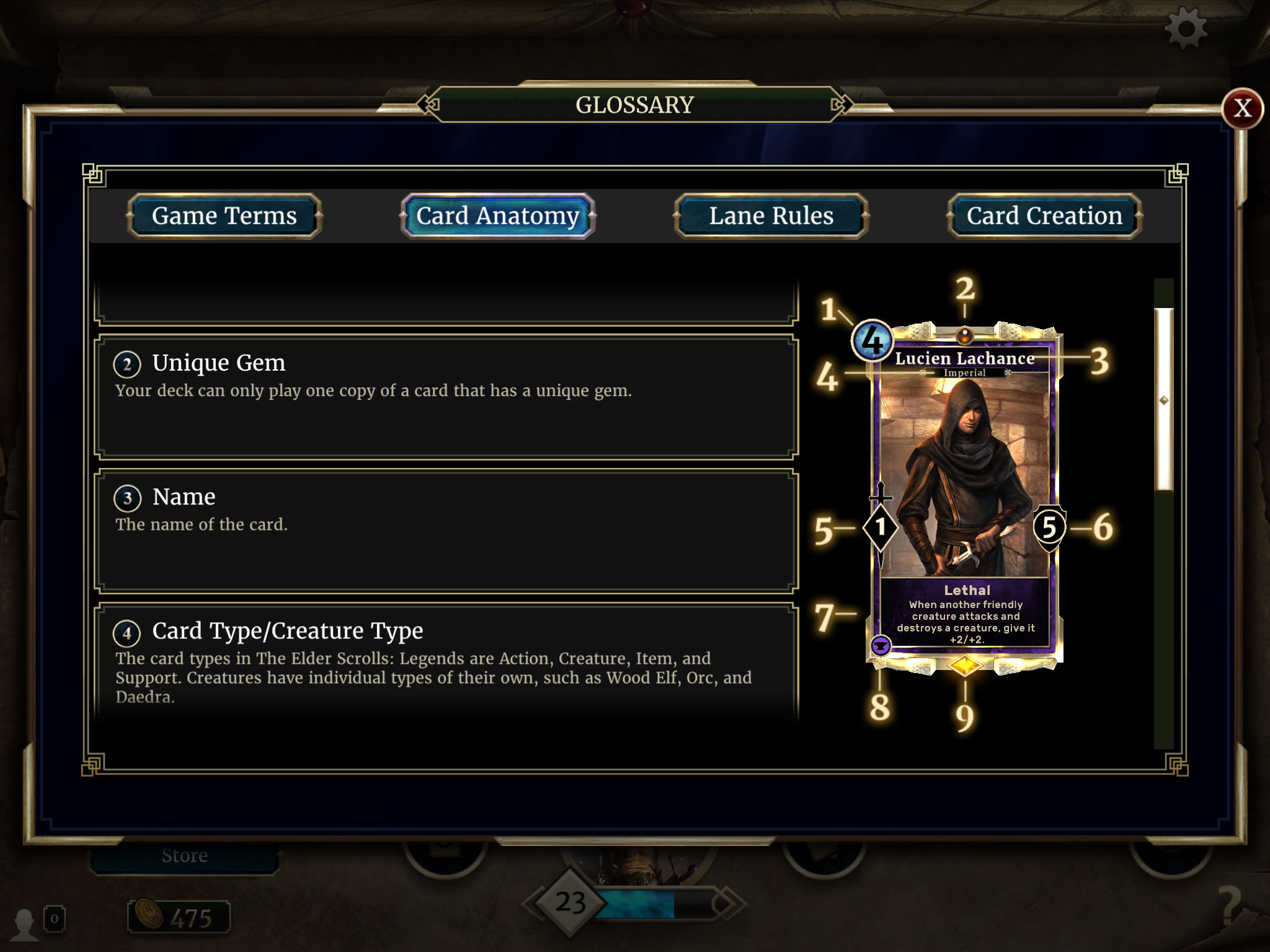 Keywords are special properties that certain cards have, based on a particular word found in their card text. There are a number of different Keywords in Legends, and understanding all of them is crucial for a full mastery of the game’s strategies.

What’s that? Of course we’re going to tell you what they all are. Please give us a little credit.

While most Keywords are right in a creature’s card text from the get go, they can also be given to creatures in play with special card effects or nullified by cards with the special effect called Silence. It pays to know the exact Keywords opposing creatures have before you attack them, which you can study by simply tapping and holding on the creature at any time.

Don’t Call it a Comeback: All About Runes 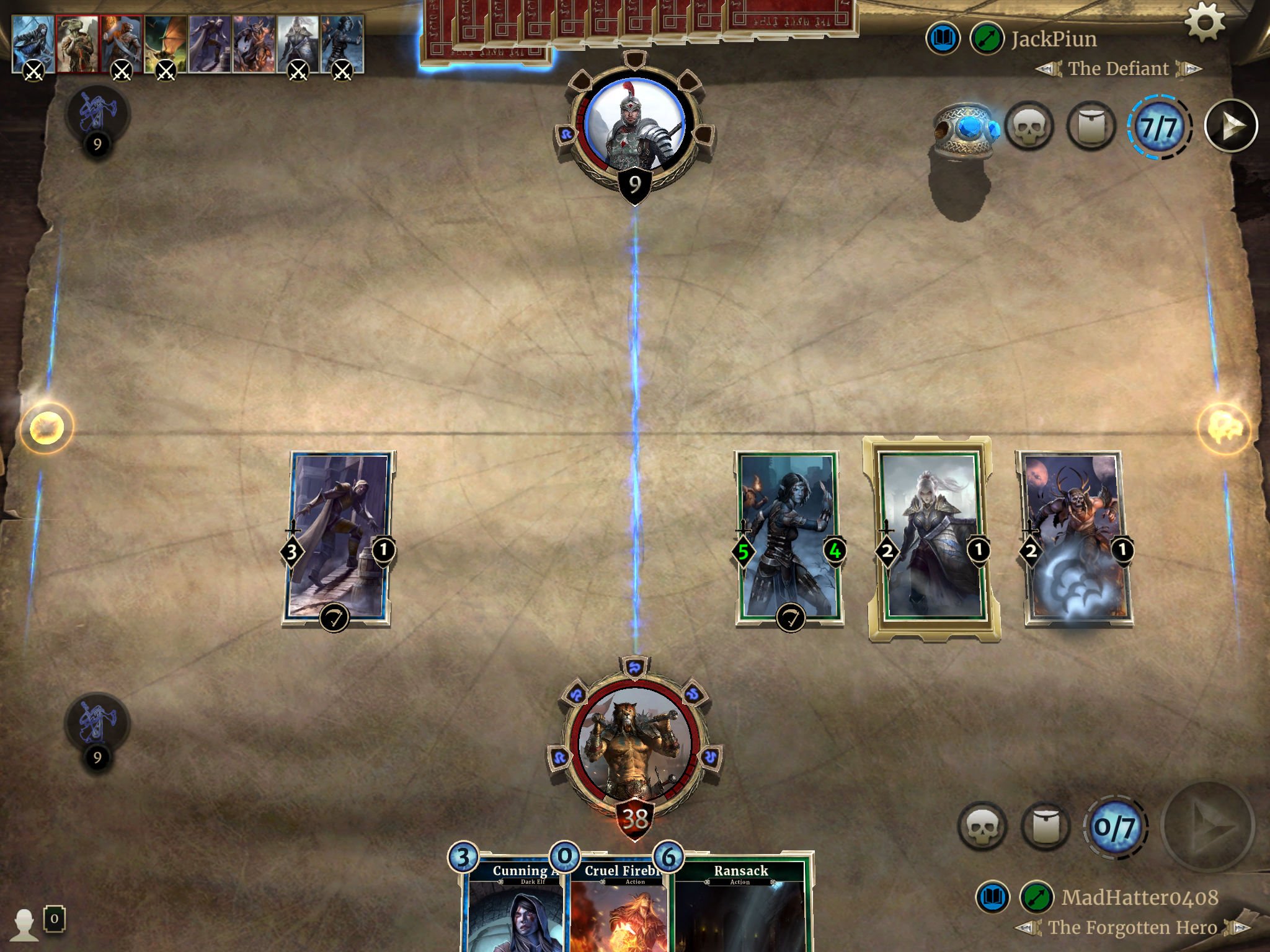 It’s quite possible to lose a duel in Legends by a wide margin, but there’s a built in mechanic to keep things interesting even if one side gets off to a big lead. Take a look at your avatar and notice the five blue symbols within the circle around it. Those are called Runes, and they can be the key to making sure you can still win a match even if you are giving up a lot of health after taking some early damage.

Runes essentially represent cards from your deck that are contained within them instead of being located in your draw pile. Every time your health is reduced to a multiple of five points for the first time — that is, when you hit 25, 20, 15, 10 and 5 health — one of the runes will be destroyed and you’ll instantly draw the card inside it.

It gets better. If the card you draw has the special ability Prophecy, you can play the card right in the middle of your opponent’s turn without paying any magicka to do so. It’s a powerful tool to help you recover from a beating. However, keep in mind that Runes work the same way for your opponent, and there are even cards that get more powerful when they destroy your Runes.

BONUS TIP: Because your opponent will draw a card when one of its Runes are destroyed, sometimes it pays to let them off the hook for the rest of a turn instead of blundering into a powerful Prophecy card. For example, let’s say your opponent has 11 health and you have a single 1/1 creature left to attack. If you feel reasonably confident you can finish the duel next turn, it might be a good idea to hold off on dealing that single point of damage and destroying the Rune and just waiting to unload heavier attacks next time you get to act.

The Five Attributes, and What They Mean for Your Deck 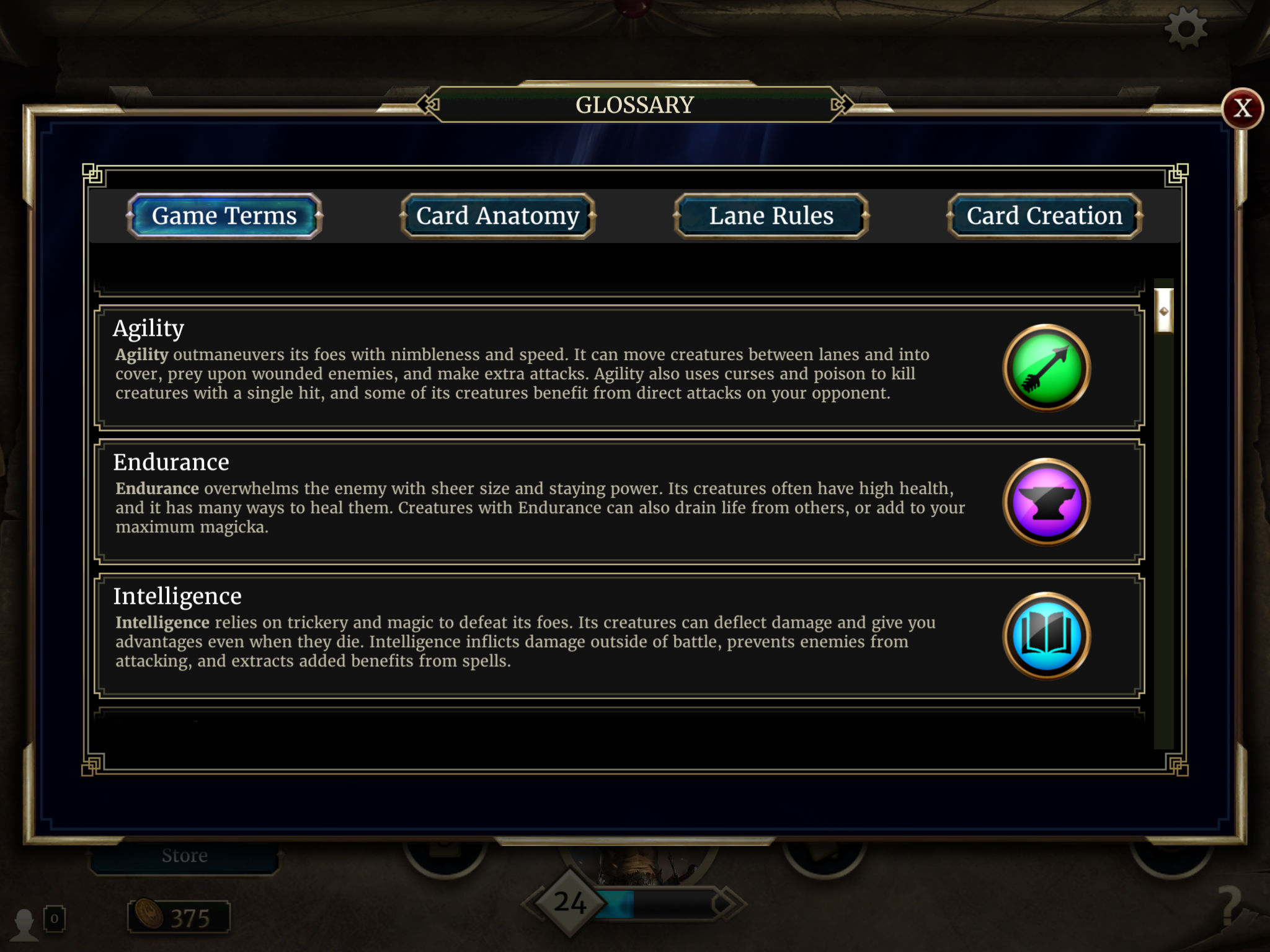 By the time you reach the end of the Story mode in Legends, you’ll unlock several well-balanced decks that can serve both as decks you take into battle while knowing they will do pretty well and fodder for your first experiments in deckbuilding. One of the first things you’ll notice is that every card has one or two colored icons that separate them by type.

Those are called Attributes, and a deck can use up to two of them — plus Neutral cards represented by a black dot within a white circle. Here are the five Attributes and what they’re all about:

BONUS TIP: Certain Legendary creatures belong to two different Attributes and can thus only be played in a deck that features both of them. They can be the centerpiece of a deck, so sometimes it pays to start with them and build around them instead of vice versa. 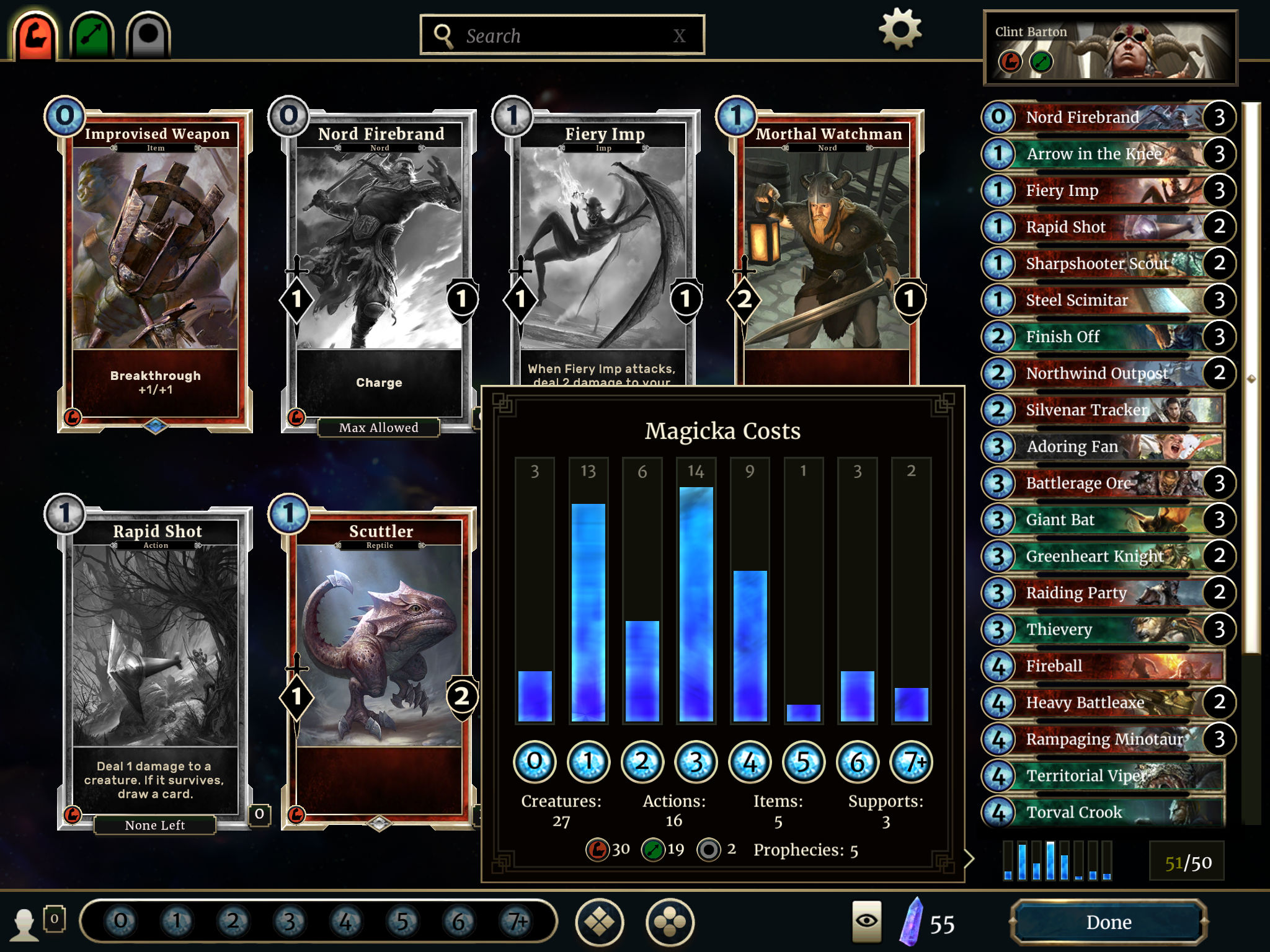 A complete overview of deckbuilding is beyond the scope of this general tips guide, but suffice it to say that The Elder Scrolls: Legends gives you plenty of ways to construct decks. Simply considering every different combination of two Attributes means there are at least 10 combinations to serve as the basis of decks, and you can certainly attempt to build single-color decks as well if you round them out with enough Neutral cards.

What we can do is provide some considerations you’ll want to keep in mind when you are ready to build your own decks.

BONUS TIP: One good way to take your first tentative steps toward building decks is to copy the decks you win in Story mode and then experiment with replacing cards on a one-to-one basis as you increase your collection. This ensures the theory behind the deck is solid and the magicka curve is fairly reliable. 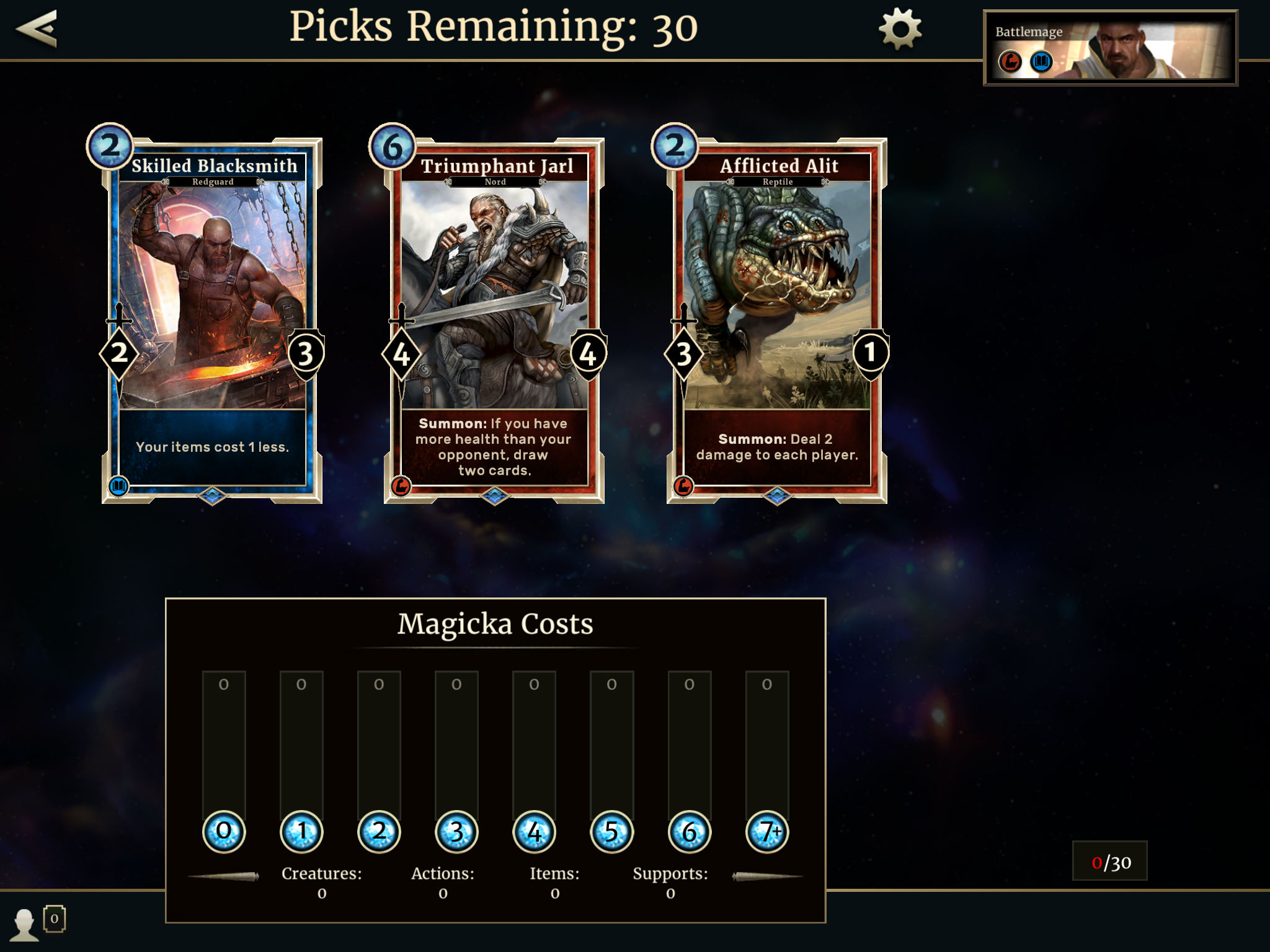 Legends has not one but two Arena modes that test your deckbuilding and dueling skills against a series of opponents. The Solo Arena challenges you to defeat eight different AI opponents before moving on to a boss battle, while the Versus Arena pits you against human opponents who are under the same deckbuilding constraints that you face.

In both Arenas, the idea is to win as many battles as possible before you lose three of them. The more wins you rack up, the better the rewards you earn when you are finally defeated or defeat the boss in the Solo Arena. Arena play can be a good way to earn gold, card packs and epic or legendary cards.

Here’s the tricky part: when you start an Arena run, you’ll have to choose from one of three Attribute combinations to start a deck. You then are presented with a selection of three cards from which you pick one. That same choice pops up until you’ve filled a whole 30-card deck, with each choice being from the same card rarity tier.

An added wrinkle in the Solo Arena is that each time you win a battle, you’ll get to add an additional card to your deck. It’s a nice twist that keeps you thinking and gives you more options by the time you get to the boss fight.

Though it costs 150 gold to do an Arena run, it’s worth it since you will always end up with at least one pack of cards, even if you end up losing three straight duels, and there’s the opportunity to do much better if you go on a little winning streak. It’s also possible to buy or win Arena Tickets, which allow you to tackle either of the Arenas for free.