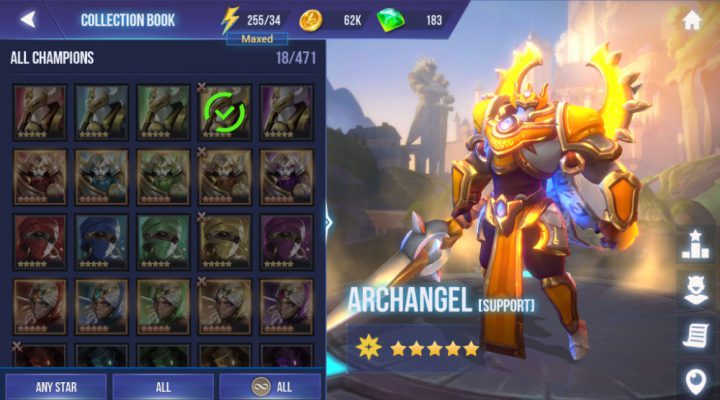 Mobile gamers seem to be digging Dungeon Hunter Champions so far, and there’s no reason they shouldn’t considering the way it combines some of the best parts of the action RPG and MOBA genres into a single title. It also offers a wide range of characters (called Champions, for reasons that should be obvious) to collect, improve and bring into either solo or PvP play.

Now the big question is this: Which Dungeon Hunter Champions characters are the best? Which ones should you be most excited to unlock or put in the most effort to attempt to acquire? While beauty is in the eye of the beholder to a certain extent, and some Champions might work better in specific circumstances or modes than others — something the game itself is actually pretty helpful about pointing out — we’ve taken the magnifying class to all of them to pick some of our favorites, as our best characters guide will explain.

Be sure to check out our other Dungeon Hunter Champions articles as well, including how to get free gems.

It’s tough to imagine a better support character than this, as Archangel can debuff enemies and lower their ATK values with his first two abilities and protect himself and teammates with Aegis. Divine Judgment gives him Haste and Silences opponents, plus he has a passive boost that increases all allies’ HP by a third. Though Archangel can be found in every element, his Light version seems the most popular among players at launch. You can try for Archangel by buying the Light & Dark Disc from the shop or winning Light & Dark Shards in 5v5 battles.

This rather unpleasant-looking fellow will actually be a welcome sight for your other characters, particularly with his Devour Magic skill that turns enemy buffs into fuel for his shield. That’s a superb ability for a Tank. Greater Demon also lives up to his name with skills that can stun or immobilize enemies, and his passive ability decreases skill cooldowns for all allies by 20 percent. Summon him from the Rare or Legendary Discs, with a higher chance when using the latter.

Available in Dark, Light and Fire varieties, Time Keeper can remove both enemy buffs and ally debuffs with Causal Reverse, plus inflict Mortal Wounds and Block Buffs with his Temporal Disruption skill. He also has multiple ways to decrease cooldowns for the Skills of his allies, which is a nifty trick. Look for Time Keeper via the Light & Dark Disc or by saving up Light & Dark Shards from 5v5 rewards.

Proof that just because you obtain a character early on doesn’t mean it can’t be useful in the long run, Boon Sister is one of the most important healers you can obtain, as her Healing Ring makes two passes that can heal all allies within range on each one. Her other skills slow and stun enemies, leaving them sitting ducks for your damage dealers. Note that the other versions of Boon Sister have different skills, so if you’re looking for the healer, you need the Water version — though the other element types have their uses too.

Let’s say you don’t have room on your team for Boon Sister and still want a capable healer. No worries, because Crystal Priest can do the job thanks to his Wave of Harmony skill that can heal up to three teammates in one shot. His Bolster buff is also good stuff, applying Regeneration and Immunity buffs. Many 2-star characters are most useful as food, but not this guy. You’ll come across him as loot on Board 3 in Adventure mode, and he’ll pop up when using Common Discs.

Modern Combat Versus update guide: What’s new in the game’s largest update ever

Dungeon Hunter Champions: How to get free Gems