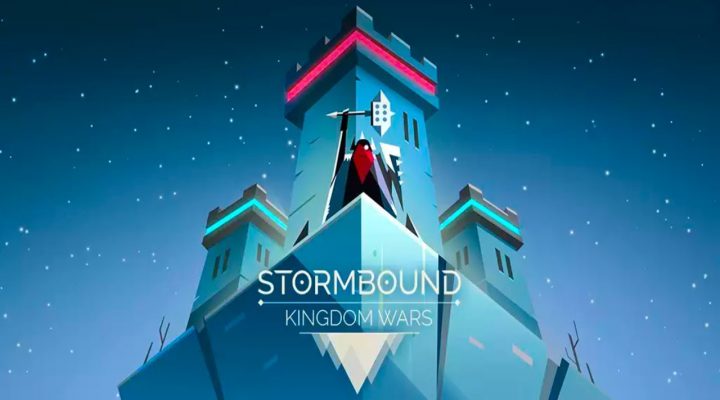 Stormbound: Kingdom Wars is a strange twist on the Clash Royale formula with a slower pace and gentle, yet satisfying animations. You create a deck of twelve cards, from which you draw four at a time, and use them to move soldiers across a 4×4 board to your opponent’s fortress on the other side. If a single troupe makes it there, it does direct damage to your opponent’s fortress’ health. When either fortress reaches zero, the game is over.

Stormbound revels in simplicity by having a limited number of cards to choose from, further limitations on how those may be combined, and a very simple formula for play. Yet the nature of the game can result in some long, frustrating matches that seem to go in circles for minutes at a time. Rather than let your fortress smolder, here are a few Stormbound: Kingdom Wars tips, cheats and strategies to get your soldiers across the board and properly sacking your enemy’s castle. 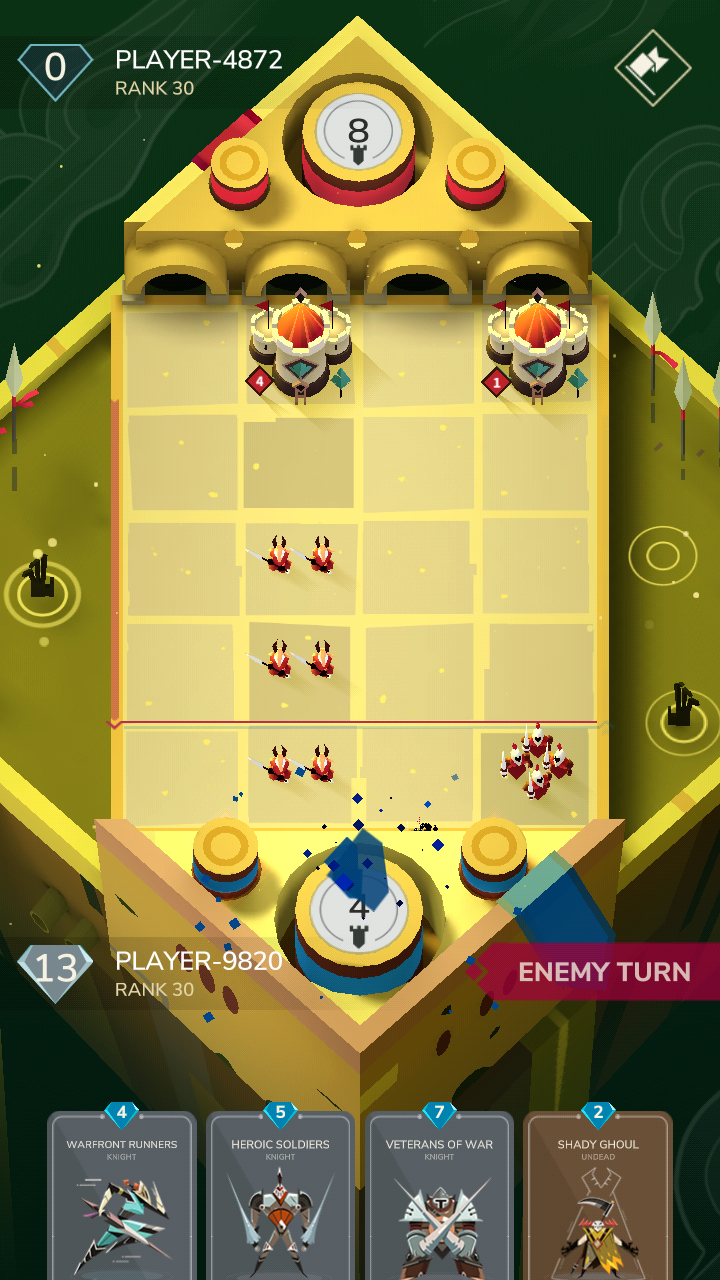 Forget about the amount of soldiers you can play. Forget about fortresses. Forget about weapons or card types. There’s exactly one thing that matters more than anything else in Stormbound, and that’s where your frontline is, and where your opponent’s is.

You must keep your frontline moving forward, and your opponent’s line very, very far away. That’s it. Everything else is just having bigger numbers than your opponent at a given time. But if you let your line fall back and your opponent move forward, they can quickly take the advantage and ensure you don’t make any advances for turns on end.

This is a delicate balancing act in the early game, when you have very low amounts of mana to work with. On turn one, you generally want to ignore your opponent and push your frontline forward, since they can’t reach your fortress right away. But on turn two, you’re likely going to have to take out some of their men before they establish a hold right outside your gates and just dump endless troupes into your front door.

There’s no single way to manage this beyond awareness of where these two lines are and a balance of moving both. If you absolutely have to choose, keeping your opponent away from you is slightly more important than getting close to your opponent, but if you can do both simultaneously, you’ll always have an edge. 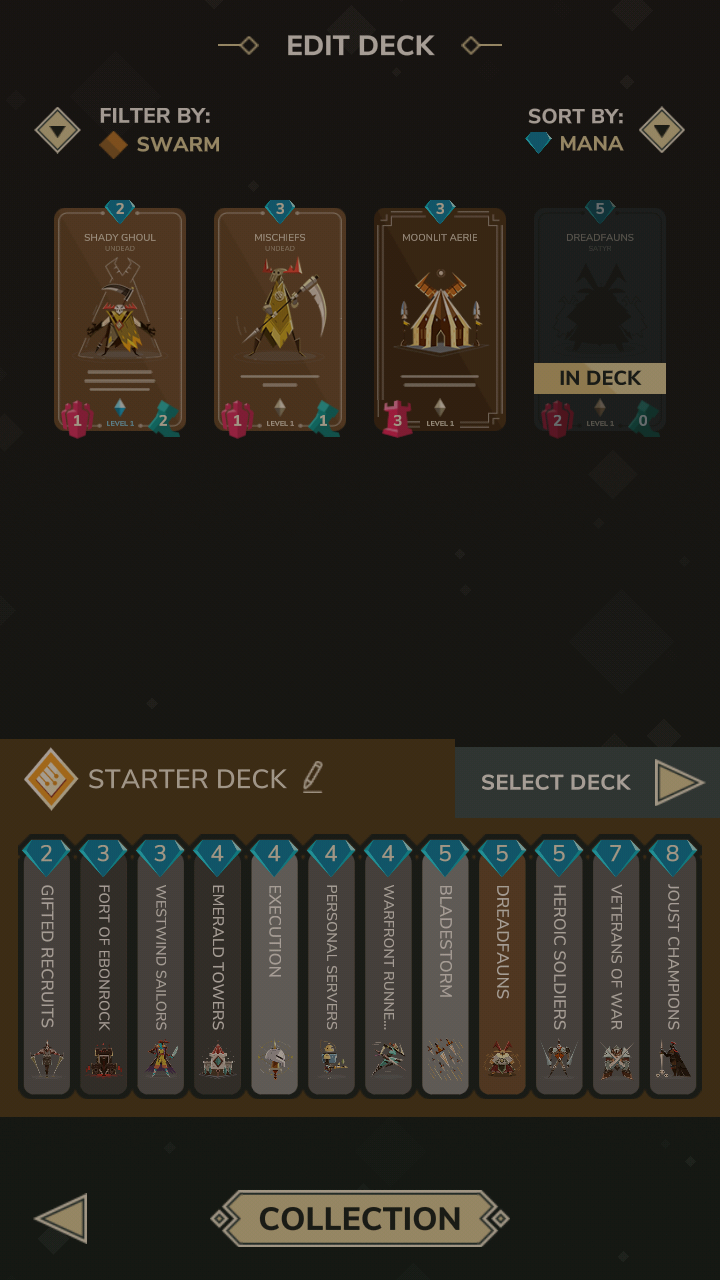 Balancing a deck can be a tricky feat, especially if you’re not used to card games. The Starter Deck you’re given isn’t bad, but you’ll quickly accumulate cards from the campaign and the free books, so you’ll want to shake things up a little. As you experiment with new deck ideas, it’s good to keep a few things in mind.

First, make sure you have enough low-mana cards. You should only have one or two 7-8 mana cost cards in your deck at a time. Any more, and you run the risk of not having enough to fend off your opponent at the start, even with your mulligan. Have at least four 2-3 mana cost cards in your deck, and a few more isn’t an awful idea if you’re having trouble with good draw at the start.

You also want to make sure you have a healthy amount of cards with actual fighting units on them. You don’t need more than two fortresses and two direct attacks, and I’d be careful with including both. Without soldiers to actually march, you can’t take down your opponent’s castle. Building fortresses and holds along the way can be good to stop your opponent, but it doesn’t move you forward any and can be a waste of mana, especially early in the game. If you’re going to use these buildings, make sure they have good synergy with other cards you’re using.

Finally, one note: you can only make one deck “type” at a time. Meaning, for example, you can’t mix cards between Swarm of the East and Winter Pact in one deck. You can only use one type, plus any neutral cards. So don’t get excited if you see a Winter Pact card that works well with an Ironclad Union card. You’re out of luck. 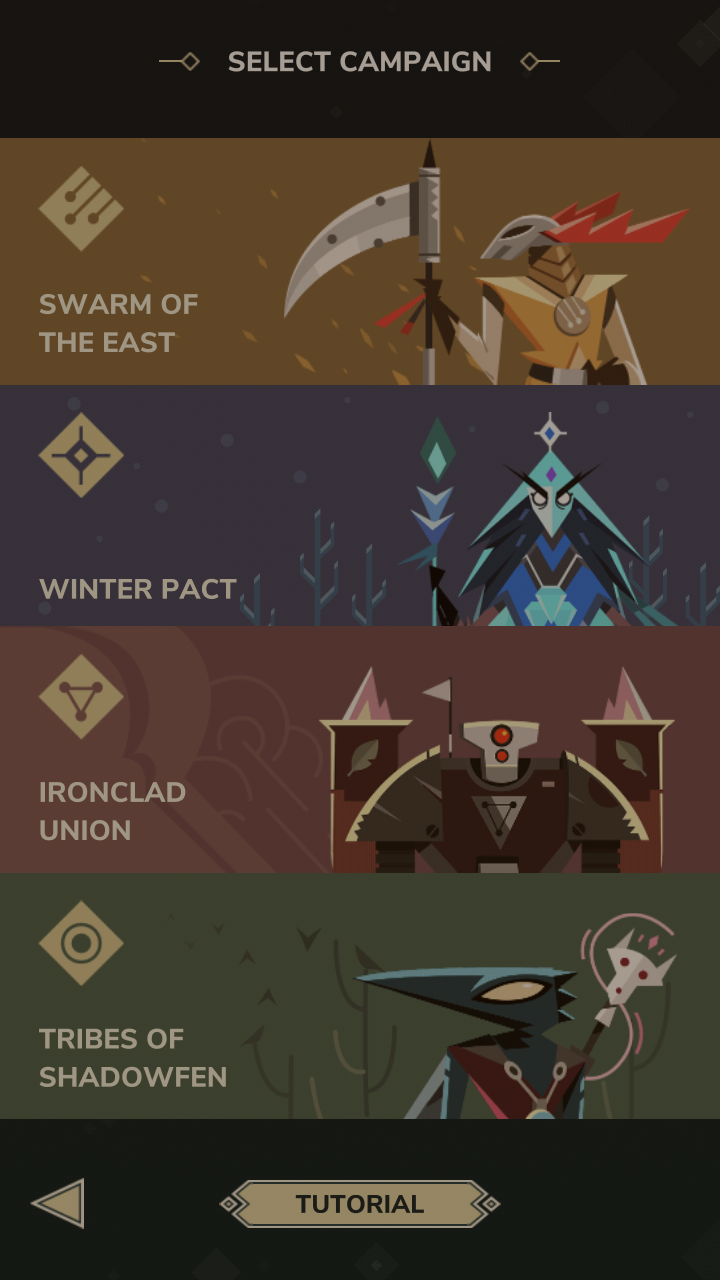 As with many other card and strategy games, anticipating your opponent’s next move is key. The trick is to pay very close attention in the early stages of the game. Since each deck only has twelve cards, you can very quickly get a feel for what’s in your opponent’s deck. Then, later in the game, you’ll know if they can reach your gates with a Warfront Runner, or bolster their existing forces with a Personal Servers to topple your guard.

If you get in a sticky situation, you may have to take losses to get your opponent out of the way. If your opponent has pushed their line to your gates, positioning your men to take out half of theirs next turn may be beneficial, even if it means a few of them slip through the cracks. Assuming you still defeat their troops, their line will go back to their side of the board and you’ll be free to reset your strategy.

Finally, know that fortresses are terrible last-ditch efforts. Do not play a fortress to try and stop some soldiers who are coming toward you. Try to counter men with men and try to always have a few leftover when the smoke clears. Fortresses, instead, are good contingency plans to bolster an already-effective strategy moving forward.