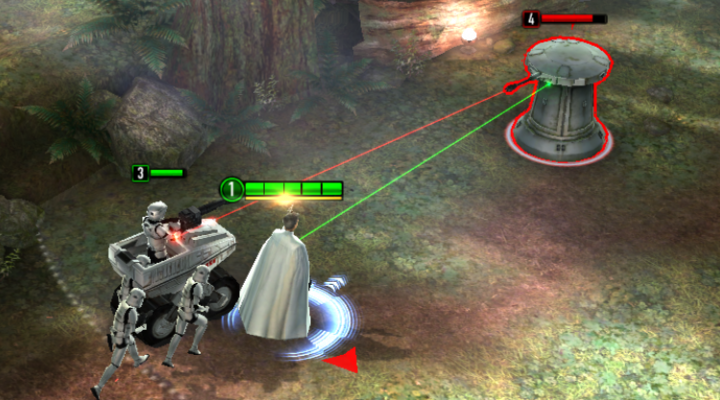 It’s good when the Force is with you, but it’s even better when you simply know what you’re doing. In Star Wars: Force Arena, it’s especially good to have a plan of attack.

Those opposing turrets aren’t going to destroy themselves, after all, and your enemy (or enemies, if you’re playing 2v2) are coming for your base. Your best bet is to make something happen quickly.

Plus you want to be able to make the right moves between matches so you can level up your cards and improve your deck. Even if you’re spending some time waiting for reward packs to open, there’s a fair amount you can do so that when you fight again, you’ve got the best chance of winning.

The Force might be able to assist you with all of that, but we’re here to provide an alternative. Our Star Wars: Force Arena Tips, Cheats and Strategies can get you into the game and crushing the enemies of the Rebellion or the Empire, whatever your preference might be. (and if you want to unlock more leader cards, be sure to read our special guide devoted to all the ways you can do just that!)

Tap to Move, Tap to Attack, Tap to Live 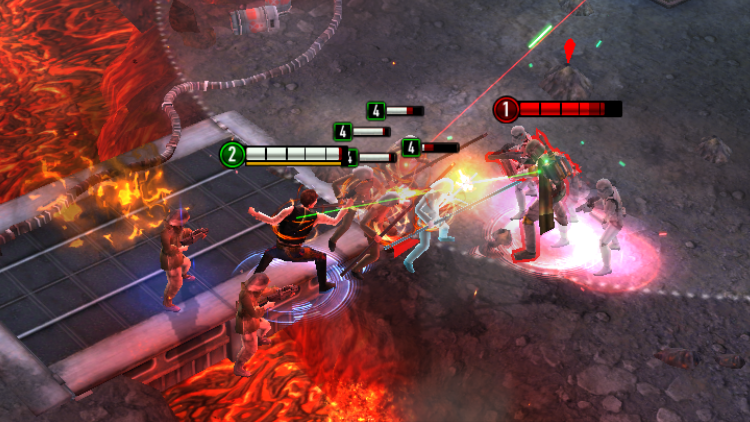 The biggest difference between Force Arena and other MOBA/card game mash-ups is that you have a leader character under your control. Other characters and vehicles get played by dragging them onto the battlefield once you’ve built up enough energy to pay their costs, but the leader can move and attack wherever you send them.

Moving around the board is as simple as tapping where you want your leader to go. Attacking is just as easy, as you simply tap on the enemy unit or turret you want to target and your leader will continue attacking it until it is destroyed, he or she dies or you give them a new target. You’ll see what you’re currently targeting thanks to a small but bright green line on the screen.

Every leader also has a skill activated by a round button in the lower-right corner of the screen next to the cards in your deck. Unlike those cards, the skill isn’t connected to your pool of energy, but rather something you can use whenever its cooldown timer finishes. Be sure to familiarize yourself with the skill for every leader you plan on using, as well as their special ability, which is passive (meaning you don’t need to activate it) but still important.

Keys to Victory in the Force Arena 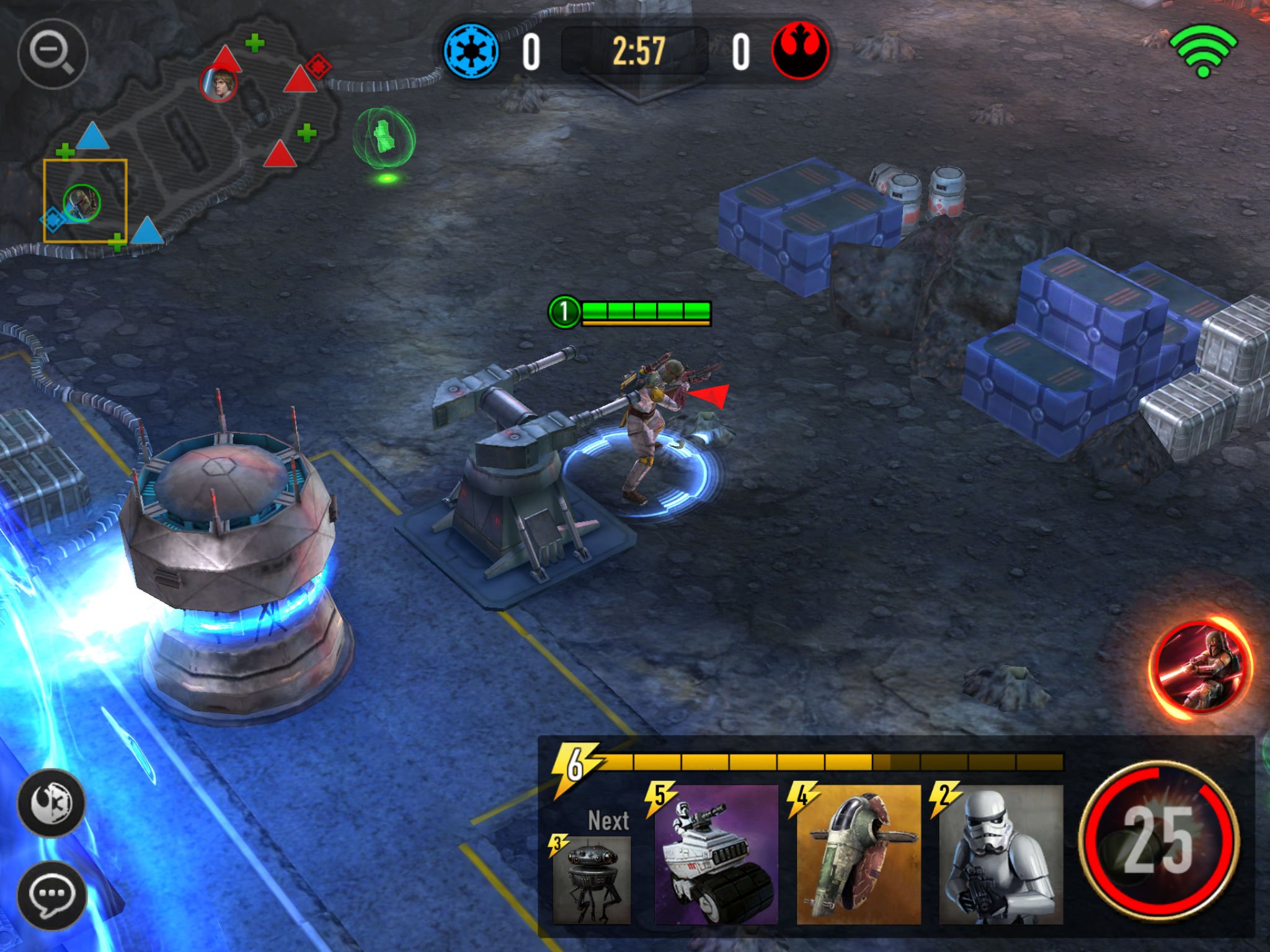 The primary goal in Force Arena, as it is in most MOBAs or MOBA-style games, is to destroy your enemy’s base. Doing so means taking out a shield generator deep in your opponent’s half of the map, and getting to it will likely mean eliminating at least one of the turrets in the two lanes on the game map.

What’s important to remember is that there’s a three-minute time limit for each match, so destroying turrets is also an end in and of itself. You get a point for each one you destroy, and if no one has blown up the other’s shield generator when time runs out, those points determine the winner. If a match is tied at the end of three minutes, there’s a 60-second overtime, and if things are still square after that, the match ends in a draw. It’s like kissing your sister. Just ask Luke Skywalker. Ahem.

Of course the opposing players are trying to do the same thing to you, which is why the mini-map is so important. On it, you can see the current location of the enemy leader (or leaders, if you’re playing 2v2), as well as triangles which represent enemy units — though you won’t be able to know what units those are until you get close enough to see them. Good thing the maps aren’t that big.

Behind each turret on the map is a glowing green plus sign that will restore some of your leader’s health. Those are up for grabs for leaders on either side, so you can retreat behind your own turret if you need a little healing, and you might be able to grab one in enemy territory once you’ve blown up a turret provided you can beat the other leader to it.

One final thing that’s important to keep in mind is where you can play your cards. In general, you simply drag a card from the bar at the bottom of the screen and drop it right where you want it. However, there is a zone around enemy turrets that prevents you from playing cards there, preventing unfair sneak attacks. Destroying the turret eliminates that zone and allows you to drop units and vehicles closer to the main turret, which is useful for a game-ending final push. Just remember your opponent can do the same to you. 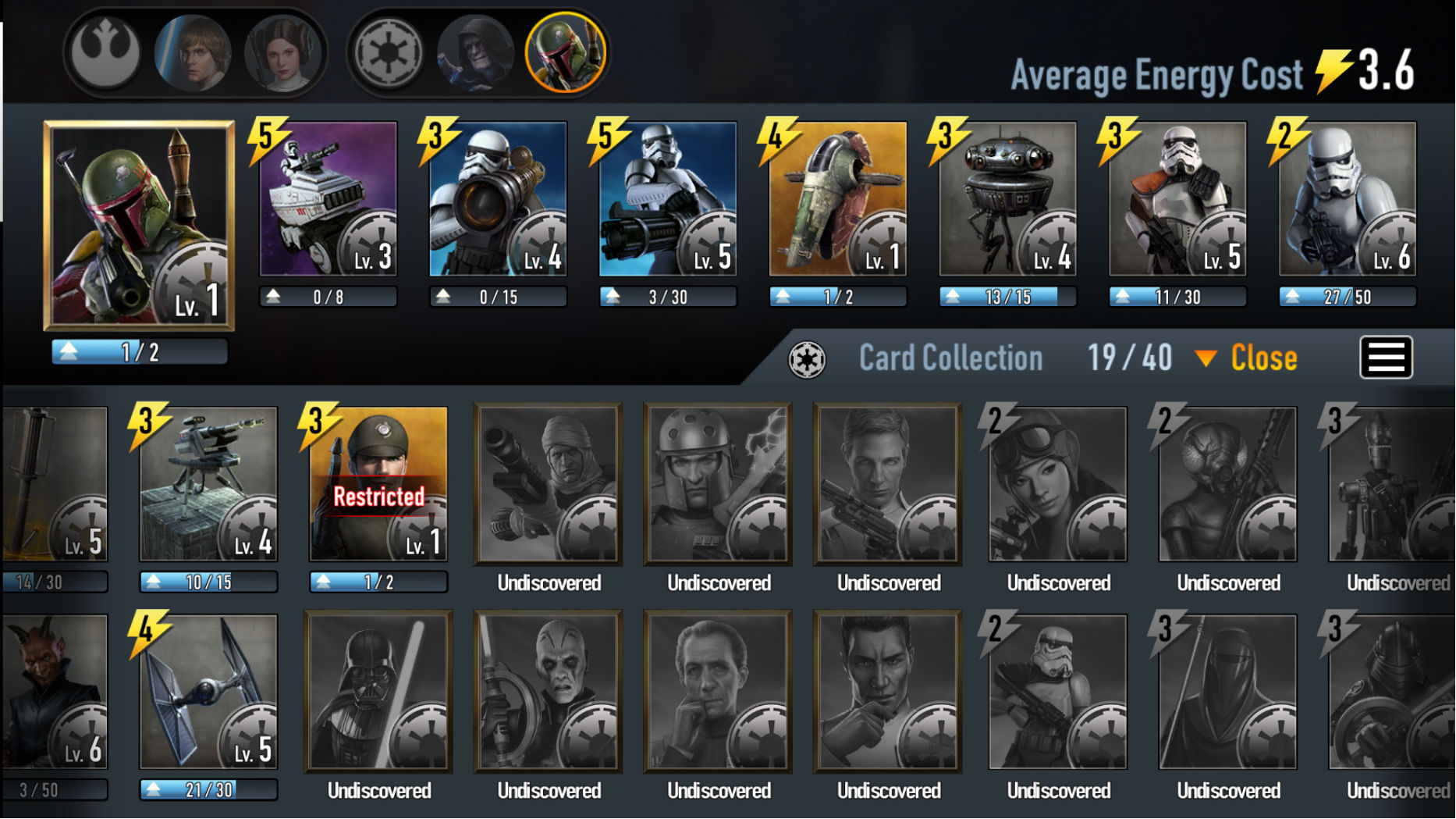 Force Arena nicely sets you up with decks of cards that are fully functional right out of the gate. You can also edit your decks by tapping on the ‘Deck’ icon in the main navigation bar on the left-hand side of the main game screen and then tapping on any of your four (two Rebel, two Empire) active leaders.

Except for Unique cards that are restricted to use with specific leaders, decks can include any seven cards along with a leader card. But the better question is what cards should they include. Deck-building strategies could easily fill a separate article on their own, but here are two important concepts to keep in mind:

Card Upgrades and Advancement: When Hoarding is Good 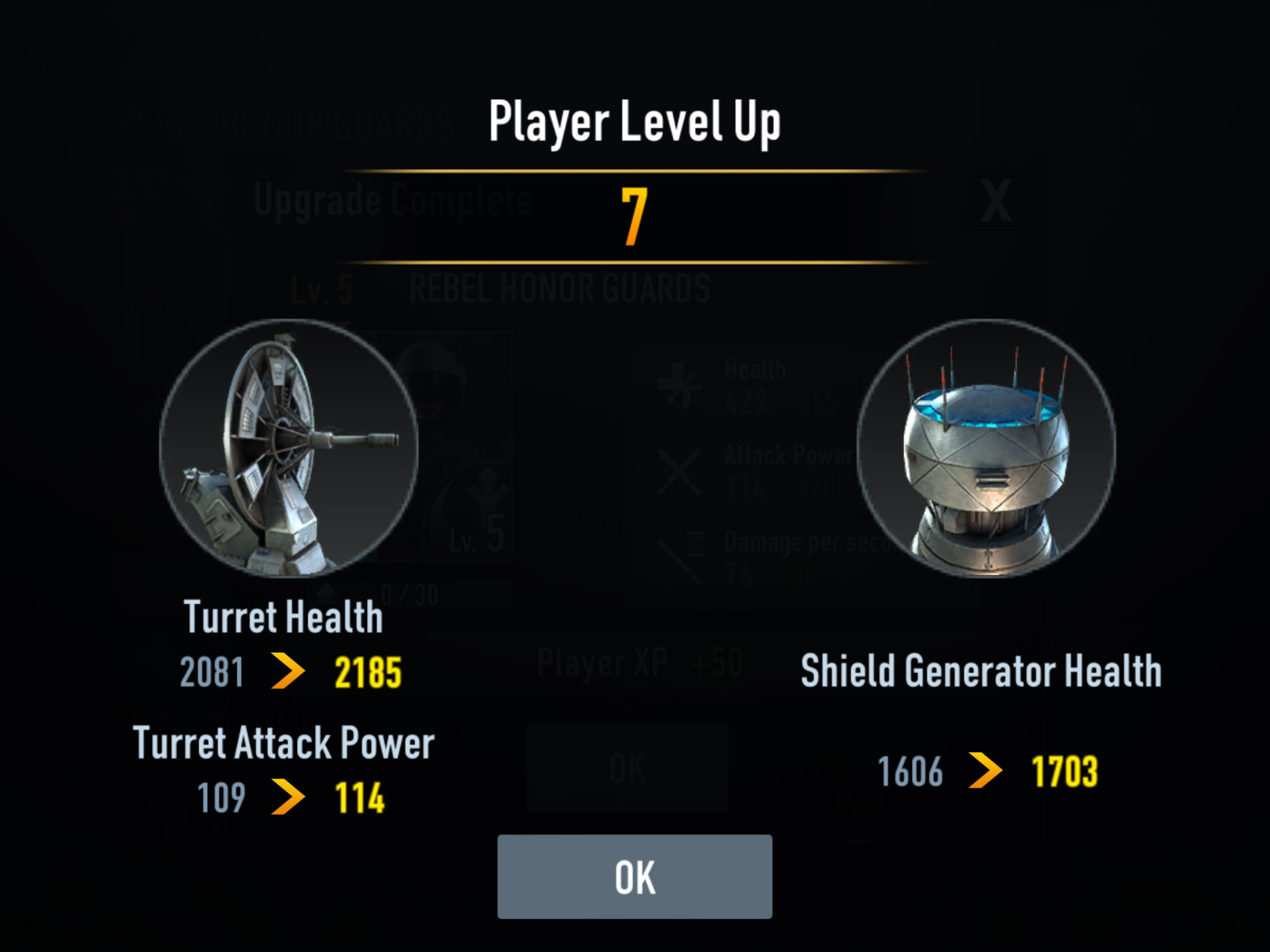 Unlocking cards in Star Wars: Force Arena is just the start. If it’s a unit or vehicle you really enjoy using, you’ll want to acquire as many copies of that card as possible, as it takes a certain number of them to upgrade it and make it stronger. Yes, that’s very much the same system as another popular game that combines MOBA and card game elements. Let’s just say it rhymes with “Dash Morale.”

Cards that can be upgraded show up with a green bar under them in your collection. Just tap on one and hit the orange button that says ‘Upgrade’ and you are good to go provided you have the required number of Credits — an amount that increases as the card reaches each higher level.

Upgrading cards also gives you player XP toward increasing your personal level, which you can track via the meter in the upper-left corner of the main screen. Besides bragging rights, improving in level is crucial because it makes your shield generator more durable and bumps up the health and attack power of your turrets.

How do you get more cards? There are a few different ways, all of which you should file away in a nice place like Scarif:

Take Me to Your Leaders

While Star Wars: Force Arena is bound to get more leader cards over time, we can at least give you a head start on the ones in the game at launch. Let’s meet them all. 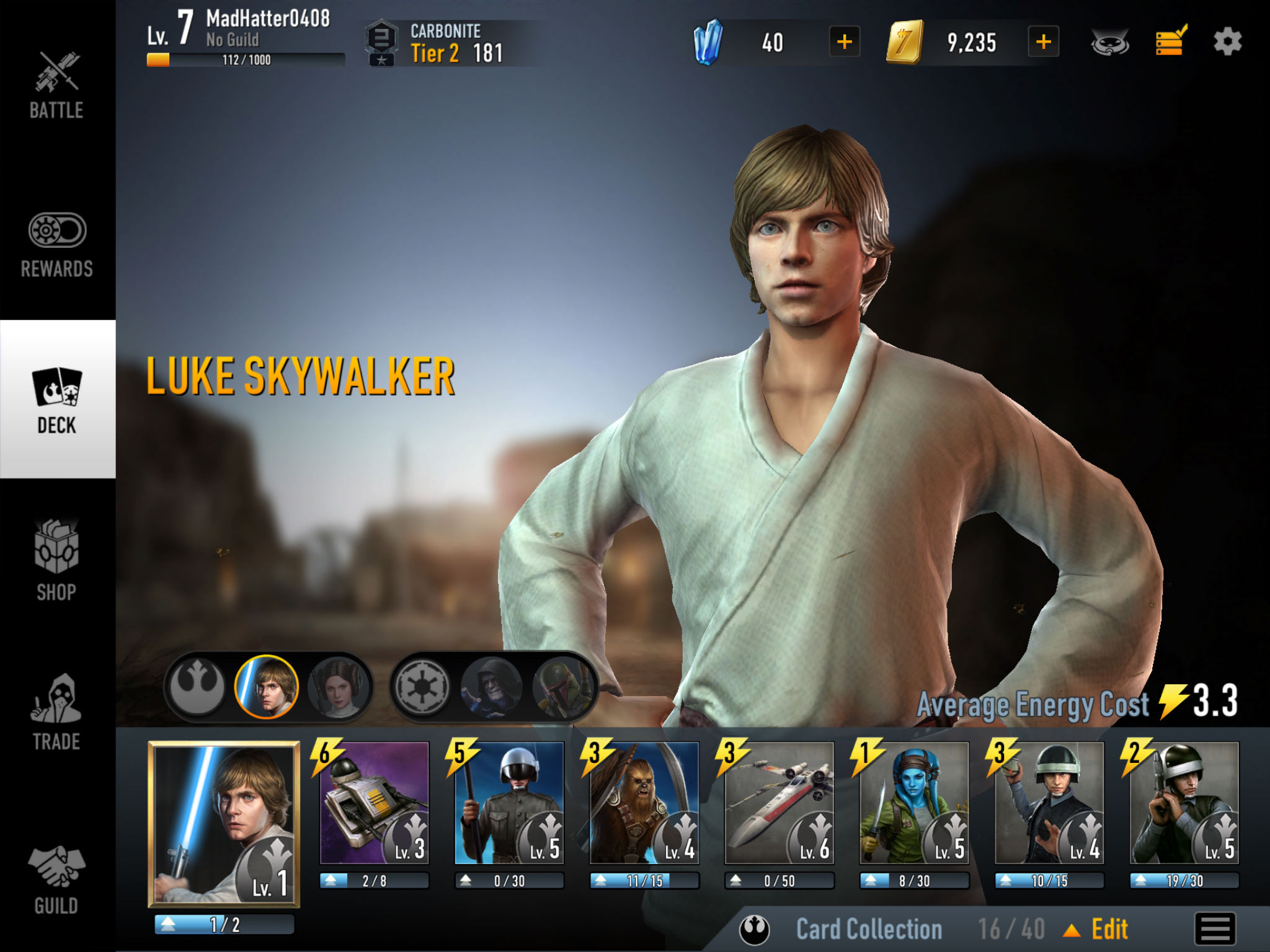 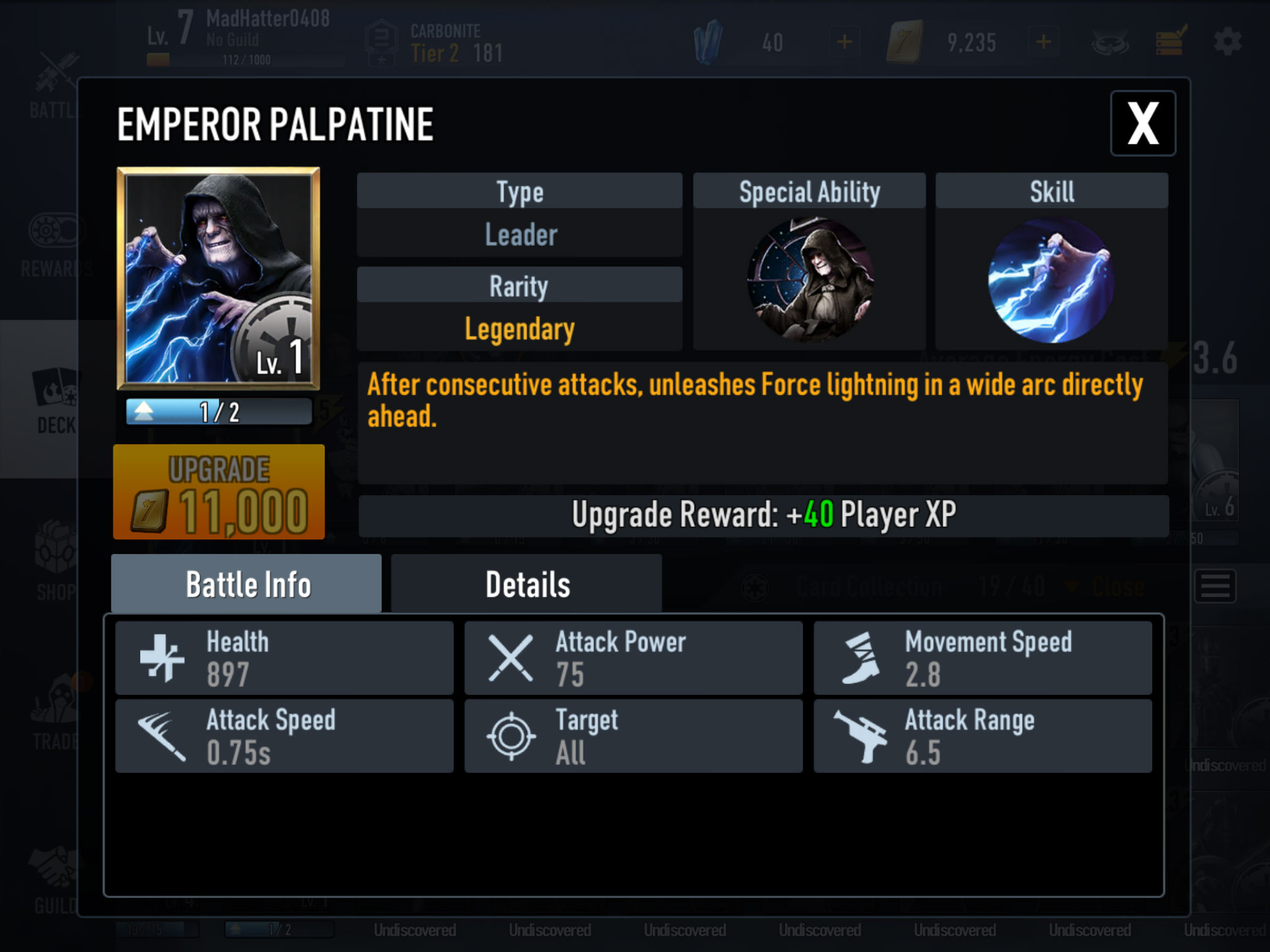 How to Play My Talking Hank