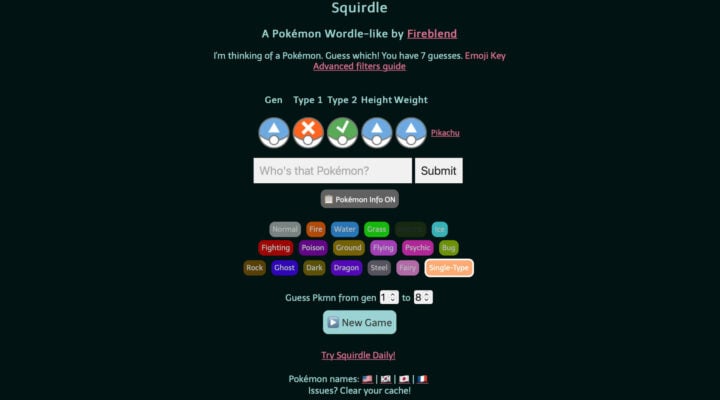 Squirdle is a Wordle-like daily puzzle game that swaps words for Pokémon. Each day, you have to guess a specific Pokémon from a database, with each guess providing you with clues to help you narrow down the correct one. You’ll learn whether or not your Pokémon shares any attributes, including gen, type, height, and weight, with an arrow helping you determine if the number of the attribute is higher or lower than the correct one. If that explanation is bad, have a play and you should get an idea.

You can play Squirdle right here. We also cover a bunch of Wordle-like daily puzzle games, so if you fancy playing something similar, make sure to check out Quordle today, Semantle today, Weaver today, LoLdle today, and Nerdle today.

Now, we’ll answer a bunch of questions you may have about Squirdle.

Squirdle is a Wordle-like daily puzzle game that challenges you to guess a specific Pokémon every single day. If you like Wordle but are a much bigger fan of cute monsters than words, you’ll absolutely love it.

How Does Squirdle Work?

Using this information, you have to try and guess the correct Pokémon within seven guesses, or it’s game over.

Got Any Squirdle Tips and Tricks?

What Are The Previous Squirdle Answers?

And that will do it for our Squirdle today guide. Make sure to grab it via the links at the top of this page, check out our other guides linked in the third paragraph, and bookmark this page and check back daily for more solutions.