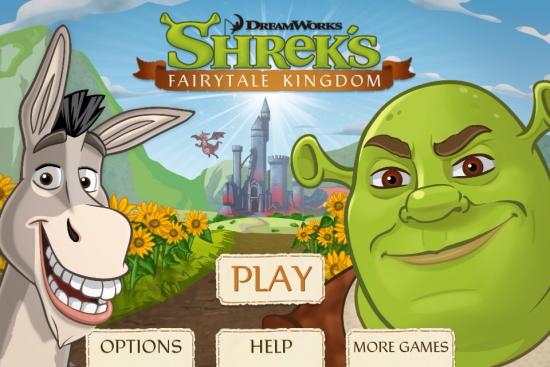 Shrek’s Fairytale Kingdom is a fantasy simulation game from Beeline for the iPhone, iPod Touch and iPad. Shrek and his friends need your help to make sure Far Far Away doesn’t become a thing of the past. Helping Shrek will be much easier with Gamezebo’s quick start guide, with all of the tips, tricks, and walkthroughs you’ll need to stay ahead of the game.

To get started, and playing Shrek’s Fairytale Kingdom as quickly as possible, go ahead and click on the “Play Now” button at the top of this page.

One you’ve finished downloading the game, go ahead and tap on the icon on your device’s home screen. The icon should be labeled “Shrek” and feature the likeness of the lovable ogre.

After reaching the main menu, go ahead and tap on “Play” to start creating your very own kingdom for you to play in.

You’ll be told the story of the kingdom through a virtual storybook. You can swipe to get through the pages until you eventually reach the kingdom you’ll be playing on.

There are five different stages of the kingdom you will be able to explore as you play the game. When you are shown this screen for the first time, go ahead and tap on “Tower” to be taken to Princess Fiona’s tower. 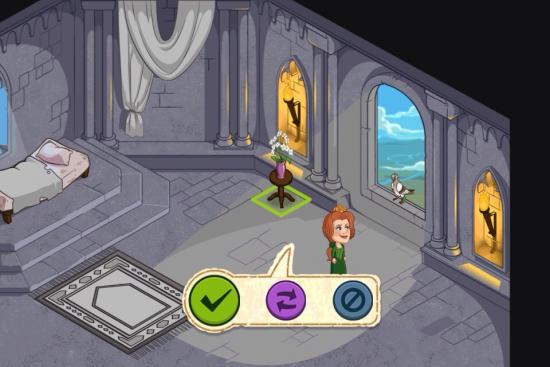 Fiona will give you various quests to complete, such as placing a flower vase in her room. Now, you won’t have to actually buy the vase. Just place it down by dragging it around with your finger, then tapping on the green check mark. If you need to, you can rotate the item by tapping on the purple icon. To cancel placement, tap on the grey cancel button.

After placing the vase, Fiona will ask you to send out the pigeon to find additional items she can use in the tower. 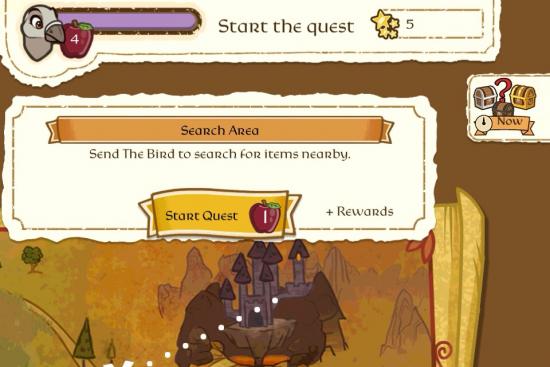 When Fiona does that, you will be taken to a map where you can send the bird out as necessary. The quest screen allows you to choose which of the available missions on which you want to send the bird. 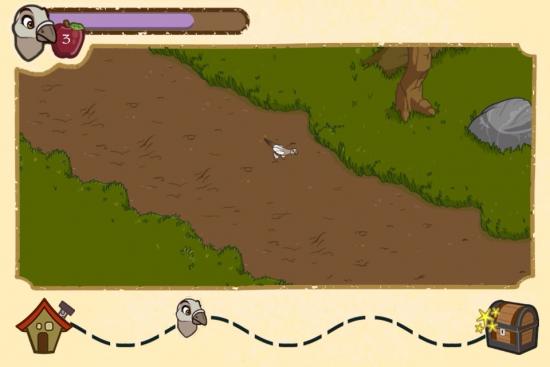 All of the quests will be shown to the right of the screen. Go ahead and tap on one, then on Start Quest to send the bird out. At this point, a scene will play where you’ll see the bird fly until it reaches a chest filled with goodies.

Once the bird opens the chest, you’ll get a chance to see the spoils inside. Most chests will include currency, XP and a chance at a special item. Tap Okay to continue. 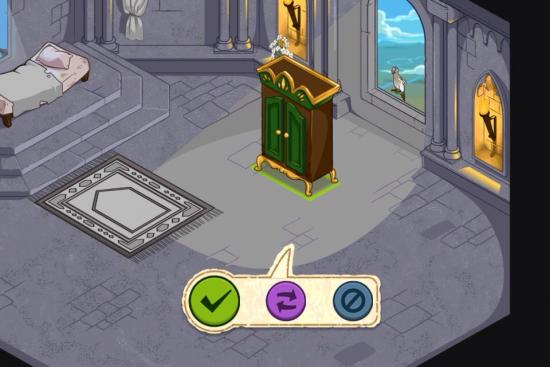 In the instance used in this guide, the bird found an armoire for use in the castle. The item you receive may be different than that.

You can then place the armoire somewhere in the room just as you did with the vase earlier. 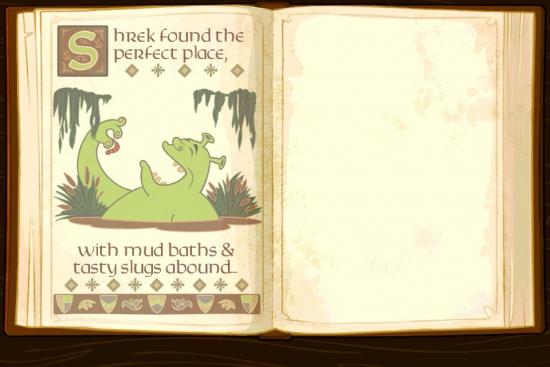 After spending some time with Fiona, you can tap on the storybook in the upper left of the screen to see how the story progresses. If you have run out of goals, always check in that area for an advancement to the story. 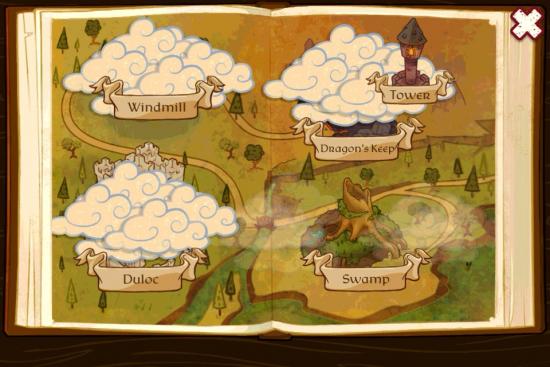 As it turns out, it’s time for us to go meet Shrek and see what he is up to down in his swamp. On the map, make sure to tap on the swamp to travel there. 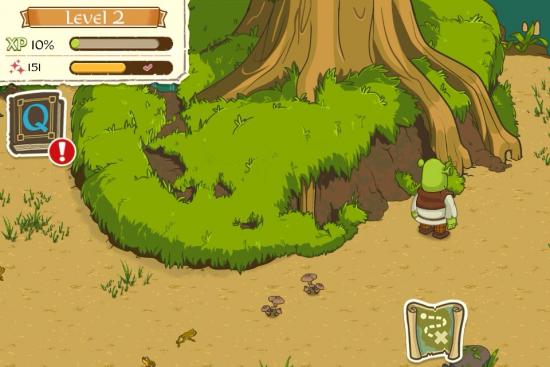 The first thing we need to do is have Shrek build his house. First, tap on Shrek to have him meet you. Then you will automatically be taken to the quest menu, which works just like it did with Fiona.

In this quest, Shrek needs to go find items nearby in order to build his home. You will now be shown a scene that looks quite similar to the bird scene earlier. However, this is an active scene where you’ll need to interact to maximize the quest. 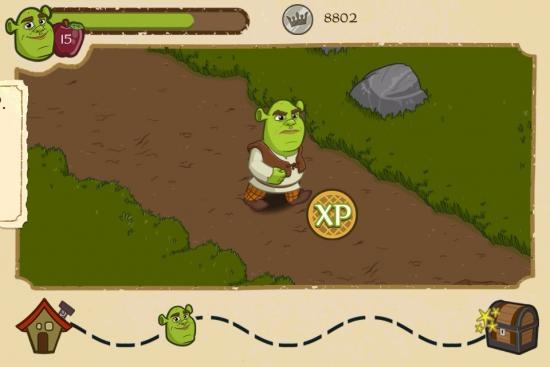 As Shrek walks down the path, you may see coins and XP laying on the ground. Tap on them before Shrek walks past them for some great bonuses.

Further on down the path, Shrek will come across a pit that he can’t walk across. At this point, you will need to use some of his stamina to jump over the pit. Tapping on “Jump Over” has Shrek leaping over the pit with ease.

Later on this same path, Shrek comes across a large rock that he can’t move without enough stamina. Wishes are another way to move past certain obstacles, and are a great option here.

Most chests require that you use stamina to open them, so it’s important for you to remember to use Wishes instead if it makes sense.

Inside his first chest, Shrek finds an axe to help build his home. Upon returning to the swamp, you should find that Shrek’s home has been upgraded to be more suitable for him.

The swamp is nowhere near complete however, as Shrek needs more items around including an outhouse, which he considers to be “an ogre’s sanctuary.”

You can build an outhouse or other buildings like it by tapping on the market button in the lower right corner of the screen. Placing it in the swamp works just like it did for Fiona with the vase and armoire.

The outhouse will require additional time to be built. If you are feeling impatient however, you can use Wishes to finish the outhouse instantly. Keep in mind that Wishes can only be acquired through purchasing them, so use them wisely. 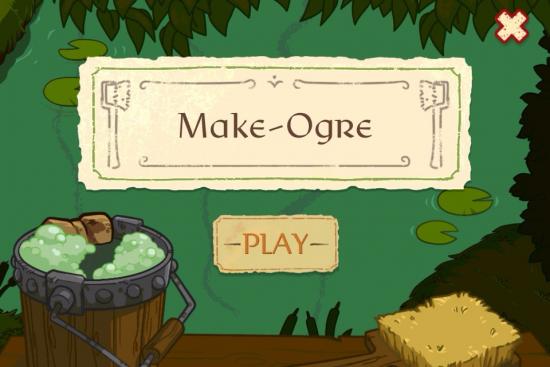 If you’re looking for a bit more once you’ve mastered the basic of the game, you can move on and try your hand at a few mini games available for you to play.

One of the first mini games available is called “Make-Ogre” and is playable once you build the mud pit in the swamp. 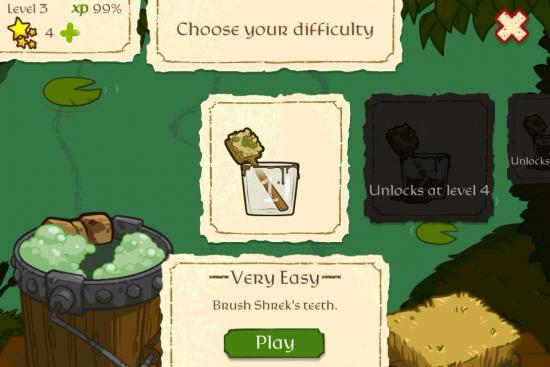 Starting up the mini game for the first time, you will need to choose a difficulty. The only option at the start is “Very Easy”. 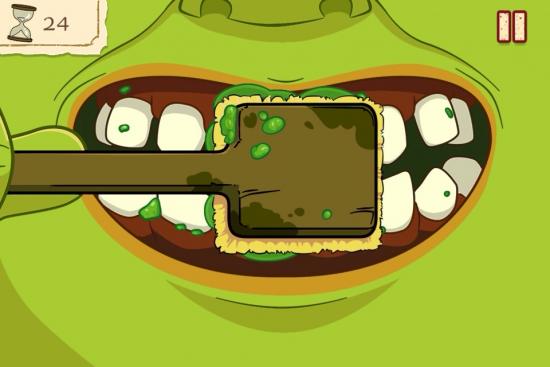 In this mini game, all you have to do is swipe your finger back and forth on Shrek’s teeth to spread gunk on them. When completing stages of mini games, you’ll receive bonus XP and coins.

Other mini games will come available over time as you complete quests for Fiona and Shrek as well as move on to the different areas in the game, so keep an eye out.

You have completed the quick start guide for Shrek’s Fairytale Kingdom on iPhone, iPod Touch and iPad. For more guides like this plus reviews, previews, news, and more keep checking back with Gamezebo!

Night In The Opera Walkthrough