Home / Walkthroughs, Tips, Cheats / PUBG Mobile Ranking System: Your Guide to Getting to the Top

PUBG Mobile Ranking System: Your Guide to Getting to the Top 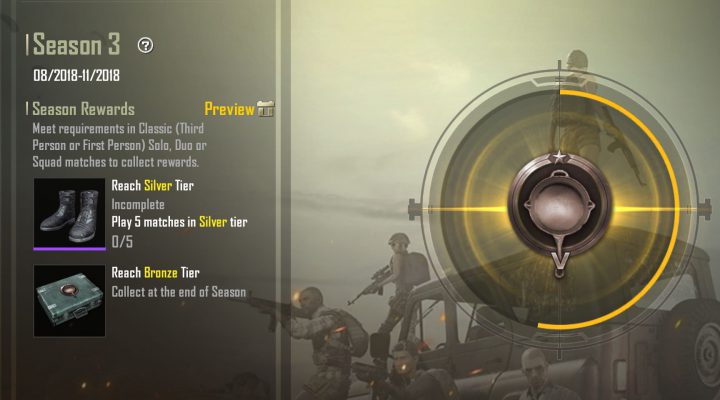 PUBG Mobile takes a lot of cues from the PC version of PUBG, but every now and then it’s the other way around. The PUBG Mobile ranking system was just adopted by its PC sibling, meaning that all players now have a chance to see how they stack up against the rest of the world.

Rankings don’t replace levels. You’ll still level up as you play more games of PUBG Mobile, earning XP from matches that eventually turn into levels for your profile that unlock rewards.

Perhaps surprisingly, your rank also doesn’t factor into the matchmaking process, at least directly. The developers say that instead of matching you or your duo or squad with players from the same rank, the algorithm instead looks deeper into your lifetime statistics to try to ensure you go up against players of roughly the same skill level.

Rank does, however, serve as a good way to show off how well you’ve played in any particular season of PUBG Mobile. Let’s take a closer look.

What Are the PUBG Mobile Ranks? 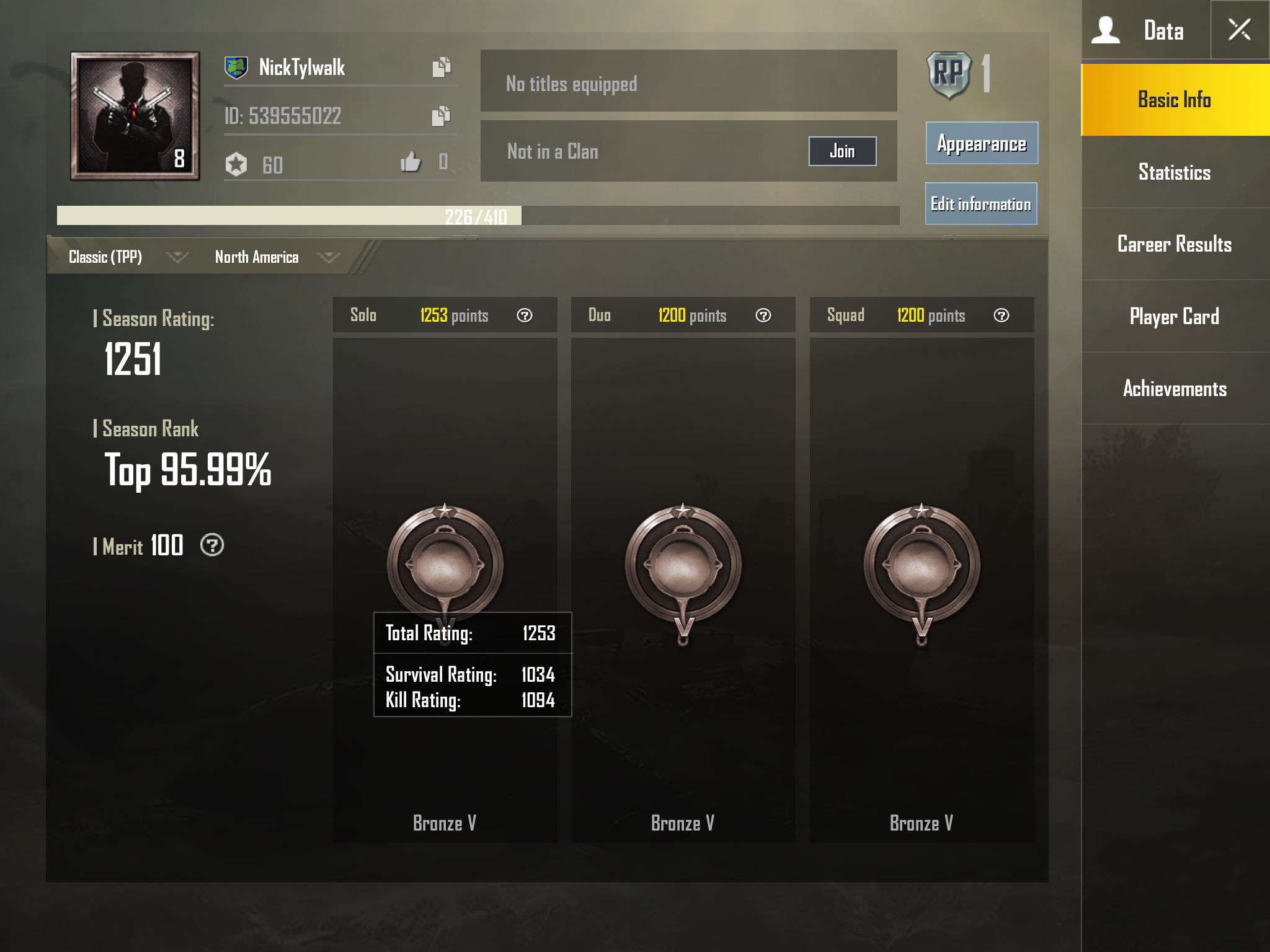 PUBG Mobile uses a slightly different ranking system than regular PUBG, but it’s mostly a matter of different terms for the same ranks. There are eight ranks in all, from lowest to highest:

Every rank below Ace has five tiers, so you start in the lowest one and then progress through those tiers before being promoted to the next rank. Example: You have to go through Bronze V, Bronze IV, Bronze III, Bronze II and Bronze I before you move up to Silver V.

The Conquerer level is reserved for only the top 500 players per server who have achieved the Ace ranking.

How Do You Increase Your Rank?

In each PUBG Mobile match you play, you earn rating points based on your survival skill and the number of kills you rack up. They are separate scores that are both important to your overall rating, though it’s commonly thought that survival is more important than kills.

You can see your current rank and rating information simply by tapping on your profile in the upper-right corner of the main game screen. Note that you have separate rankings in Solo, Duo and Squad play, though you do not have individual rankings for each map. You also have separate ranking for 3rd person and 1st person play.

What Rewards Do You Earn for Higher Rankings? 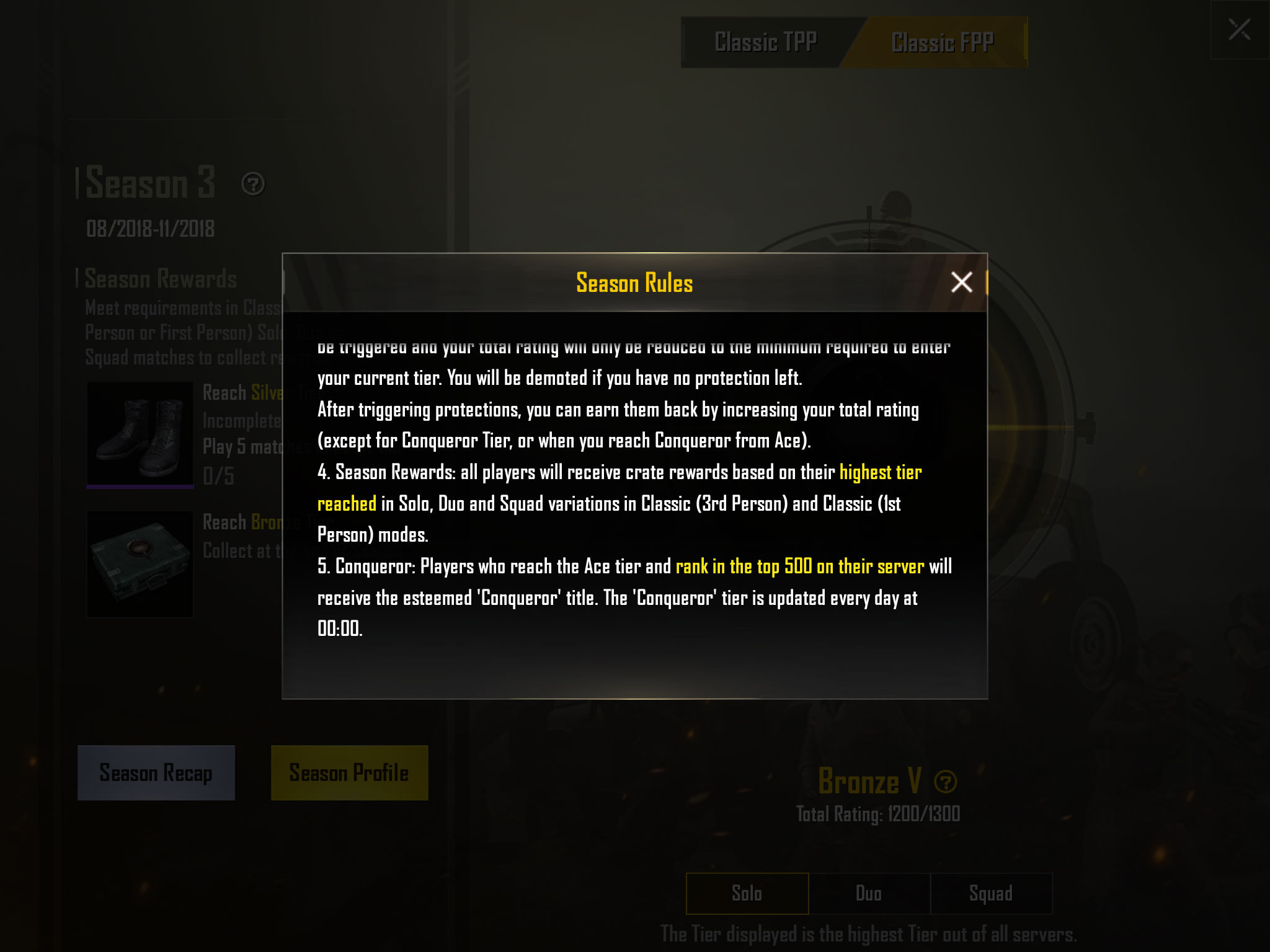 Here’s why specializing in one PUBG Mobile mode can be be beneficial: You earn a rewards crate at the end of every season, which lasts around four months. The contents of that crate are determined by the highest rank you earn in any variation of play, meaning 3rd or 1st person and in Solo, Duo or Squad formats. So while its arguably the most fun to be a jack of all trades, it will pay off for you at season’s end if you focus.

Hopefully, you now have a much more complete understanding of the PUBG Mobile ranking system and what it’s all about. If you found this artcile helpful, you might also want to check out our Sanhok map tips and ultimate weapons guide.

Dragalia Lost: All the Ways to Get Free Wyrmite