Home / Walkthroughs, Tips, Cheats / Pokemon Quest: How to get more Pokemon to be your buddies

Pokemon Quest: How to get more Pokemon to be your buddies 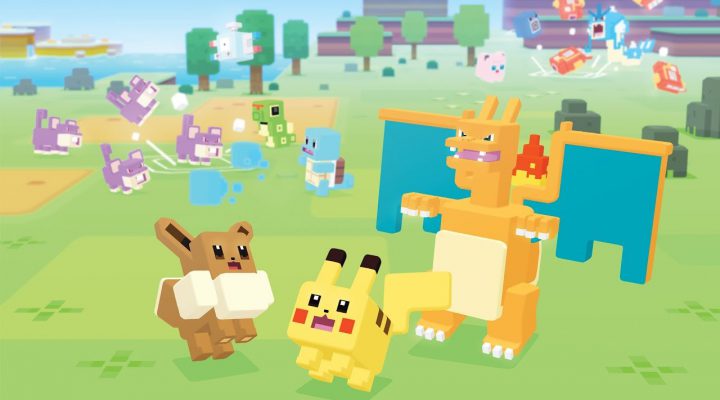 If the phrase, “the more the merrier” ever applied to any franchise, it would have to be Pokemon. That “gotta catch ’em all” ethos shines through in just about every game to ever feature the pocket monsters, and Pokemon Quest is no exception. The big difference is that you do a lot of battling in Nintendo’s latest, block-style action RPG and virtually no catching.

That said, there are still a wide range of Pokemon you can recruit to your team — all 150 of the original Kanto region Pokemon, if the game’s Pokedex is any indication. You just have to accept the fact that you’re going to be building your team gradually and not racking up new additions with every quest.

There are two ways to get more Pokemon from the island to be your buddies and potentially join you on expeditions in Pokemon Quest, one very simple and the other a bit more involved. Let’s hit the simple one first.

Yep, just playing the game daily will get you a new Pokemon once per day. Just log in and head to your Base Camp and check around for a Pokemon with a word balloon sporting an exclamation point over its head. Tap on it and it will become your newest buddy, and you’ll immediately be able to put in on your team of three if desired. 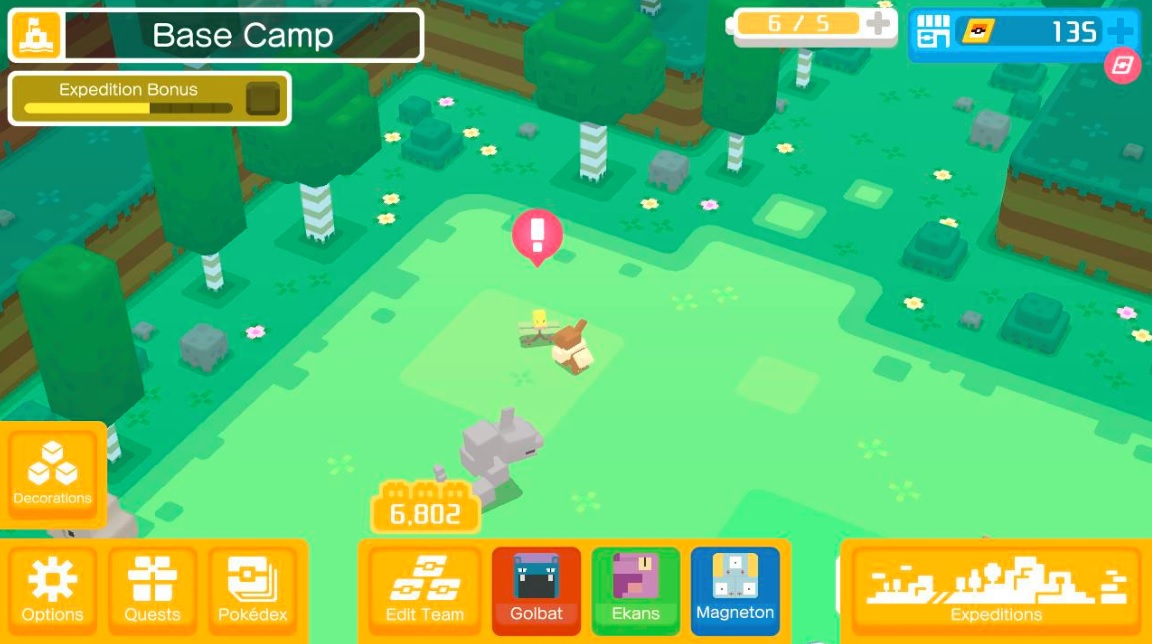 See? We told you that one was easy!

Cook different foods at your Base Camp

This method is more complicated, but if done correctly, will give you a little bit more control of what kinds of Pokemon show up at your Base Camp. In the middle of your Camp, you’ll find a big pot. You can use that to cook food that will attract Pokemon, which then become your friends. We suppose the best way to a Pokemon is through its stomach, at least in this particular game.

To cook a new dish, simply drag ingredients from the inventory on the right over to the five slots in the pot. How many of each ingredient is needed depends on the size of the pot, as you can earn new pots and brew bigger batches of the dishes as you advance through the game. Larger versions of the recipes will result in higher level Pokemon and potentially even two Pokemon at a time showing up in some cases. 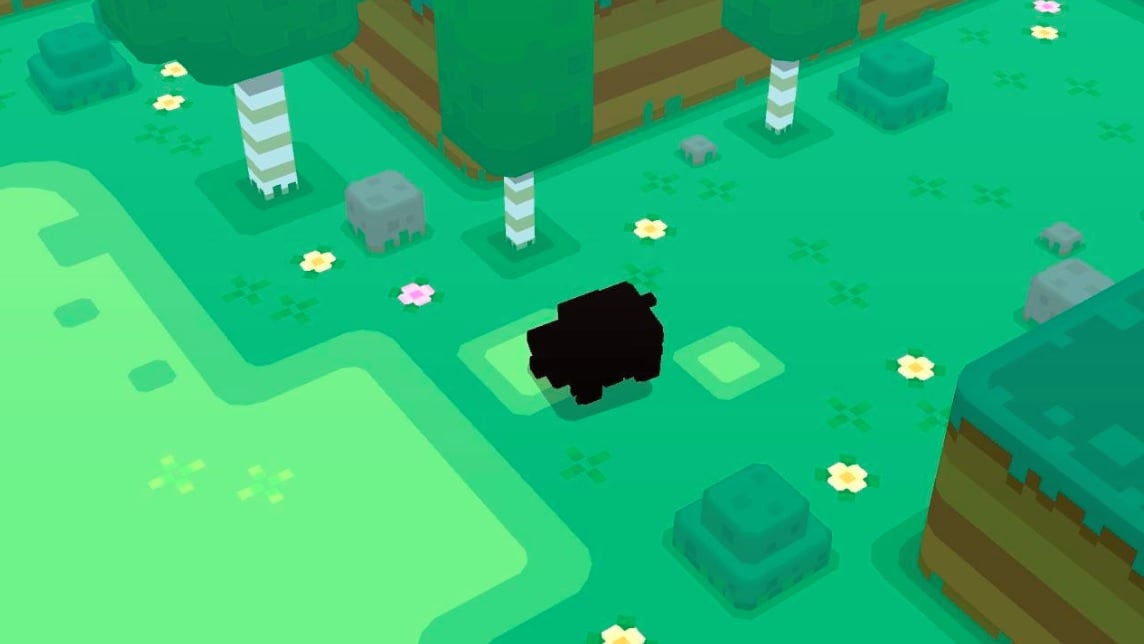 Where do you get ingredients? They are the main loot drops from defeated enemies during expeditions, appearing much more often than Power Stones. You can also obtain extra ingredients by recycling Power Stones you no longer need, usually because the Pokemon you are using on your team have outleveled their usefulness.

You can only have one meal cooking in the pot at any given time, and depending on the recipe you are making, it will take two or more expeditions for the meal to finish cooking. Once it does, simply return to Base Camp, tap on the pot to open it and watch as the smell attracts Pokemon. You can also spend PM Tickets to speed up the cooking process if you simply can’t wait. 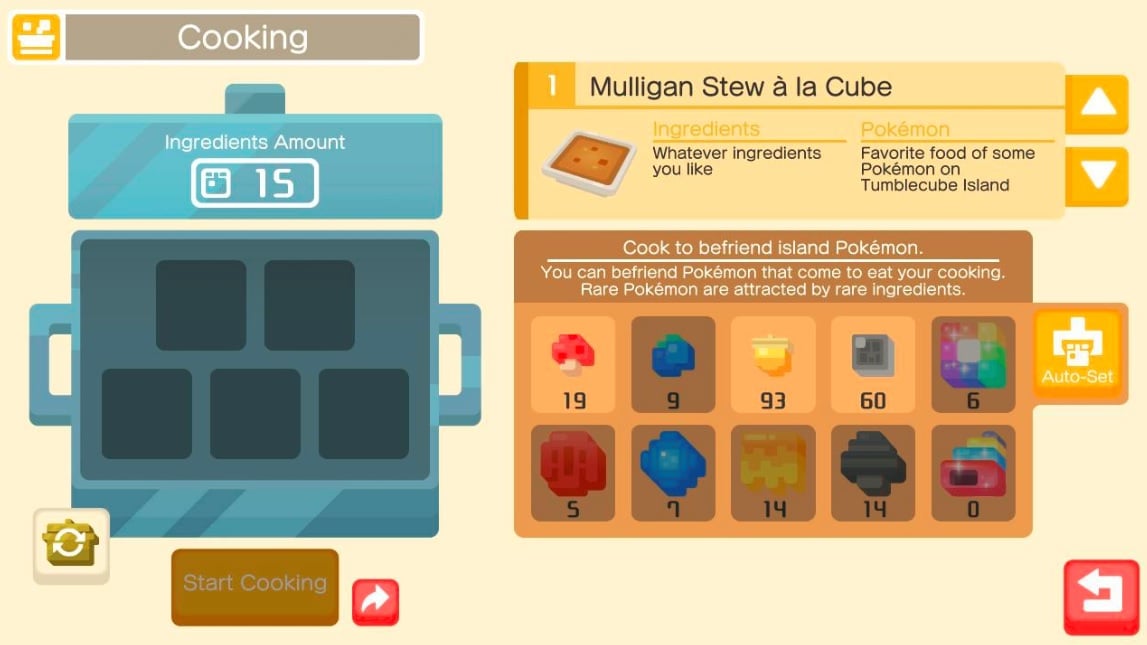 At launch, there are 18 different recipes to discover, each of which will attract a slightly different type (used in both the general and Pokemon-specific sense) of creature. Be sure to experiment to unlock more of them, and no worries — there is a catch-all generic recipe if you don’t use a combination of ingredients that corresponds to any of the others.

Looking for more Pokemon Quest articles? Make sure to check our our guide on how to get more PM Tickets for free.

How to get free PM Tickets in Pokemon Quest