Home / Walkthroughs, Tips, and Cheats / Pokemon GO trading guide: Everything you need to know to trade

Pokemon GO trading guide: Everything you need to know to trade 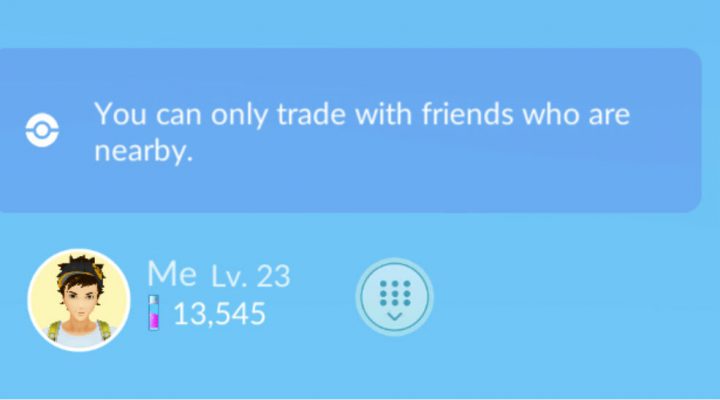 It’s not an exaggeration to say that trading is one of the features Pokemon GO players have most wanted to see added to the game since it first burst on the scene in the summer of 2016. If you’ve been playing for any length of time, you already know that social features of any kind were a bit lacking at the beginning, but the developers at Niantic have slowly but steadily been rectifying that with nearly every major update, and trading has finally made it.

If you’re at least level 10, congratulations: You can trade Pokemon with other players. However, there is a fairly long list of things you need to know before you start, which is what our Pokemon GO guide to trading is all about. Let’s get to it!

To trade with someone, you need to be friends in Pokemon GO

This might be common sense, but there’s no trading with randos. Trades can only be performed with trainers on your Friends List. To start the trading process, all you need to do is go into the profile of the friend in question and tap on the ‘TRADE’ icon, which looks like a little handheld gaming console. But there’s a pretty big catch involved …

You need to be physically close to someone to trade Pokemon

This is perhaps the biggest bummer of anything involved with Pokemon GO trading. You need to be close to the person you’re trading with to make it happen, and we don’t mean in an IRL friendship sense. The game itself says trades can only be done with other players within 100 meters of you.

So while it’s great to make Pokemon GO friends all over the world for gift-giving purposes, just know you’ll need at least some local in-game friends if you want to trade.

Once you’ve found a friend who’s nearby, you can get to trading. But you’ll want to make sure your Friendship level is pretty high before you do.

Why? Well, for starters, trading requires you to spend stardust just for the privilege of making the trade, but the amount required depends on whether the Pokemon involved is already in your Pokedex or not. Here are the costs for trading different types of Pokemon in your Pokedex:

Now, here are the costs for Pokemon that you will be adding to your Pokedex for the first time, which are much higher:

You can only make one special trade per day

Hey, all trades are special in their own way, right? Heh. What we mean is that Pokemon GO limits you to one trade involving Pokemon not already in your Pokedex, Legendary Pokemon, Shiny Pokemon or other types of Pokemon you haven’t already caught on your own, like the event-specific characters you’ll sometimes come across.

One other thing to note is that you can’t trade mythical Pokemon at all, which only means Mew at the time of this article, nor can you trade Pokemon that have already been traded to you. It might have something to do with this last important trading tidbit …

Pokemon involved in trades are “re-rolled”

Yep, you might be surprised to find out that a Pokemon you receive in a trade doesn’t have the same CP or HP as when you saw it in your friend’s collection. What gives?

To avoid abuse of the trading system, Pokemon GO randomizes the stats of both Pokemon involved in a trade. This can be frustrating, for sure, but it can also benefit you by giving you an even more powerful Pokemon than you thought you were getting. Over time, it should even out, in the sense that the stats will go down on some of the Pokemon you receive and up on others. We just wanted to let you know so you weren’t caught off-guard.

Looking for more of our latest Pokemon GO guides and tips? Check out our Shiny Pokemon list and guide to cultivating friendships.