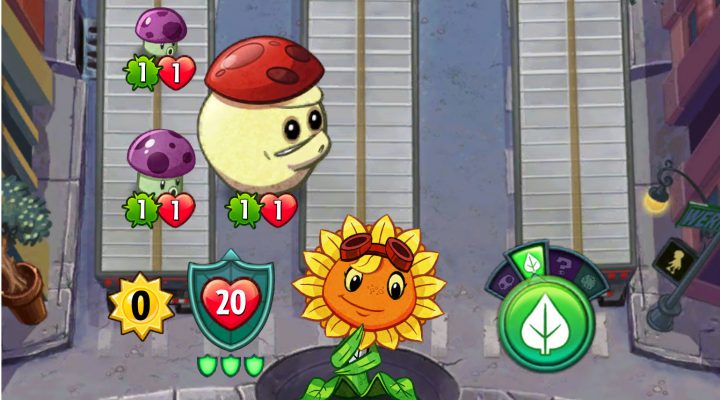 It’s time to pick up the war between plant life and the undead again. Except this time, Plants vs. Zombies Heroes wants you to play cards to do it.

Not the standard cards you’d use for poker or pinochle (people still play that, right?), mind you, but the collectible kind that feature over 200 different plants and zombies. Each of them has their own unique stats and abilities, and that’s not even including the heroes, specially buffed up characters with four superpowers apiece.

That might sound intimidating, but the framework of Plants vs. Zombies Heroes is meant to put both PvZ and collectible card game players at ease. Yet we’d humbly suggest that since we’ve been battling it out on both sides of this conflict since the game was in soft launch, we’re uniquely qualified to provide some advice.

Check out Plants vs. Zombies Heroes Tips, Cheats and Strategies and we feel confident that you’ll be better prepared to play your cards right, no matter who you choose to side with in the war for the lawn.

Stay in Your Lanes 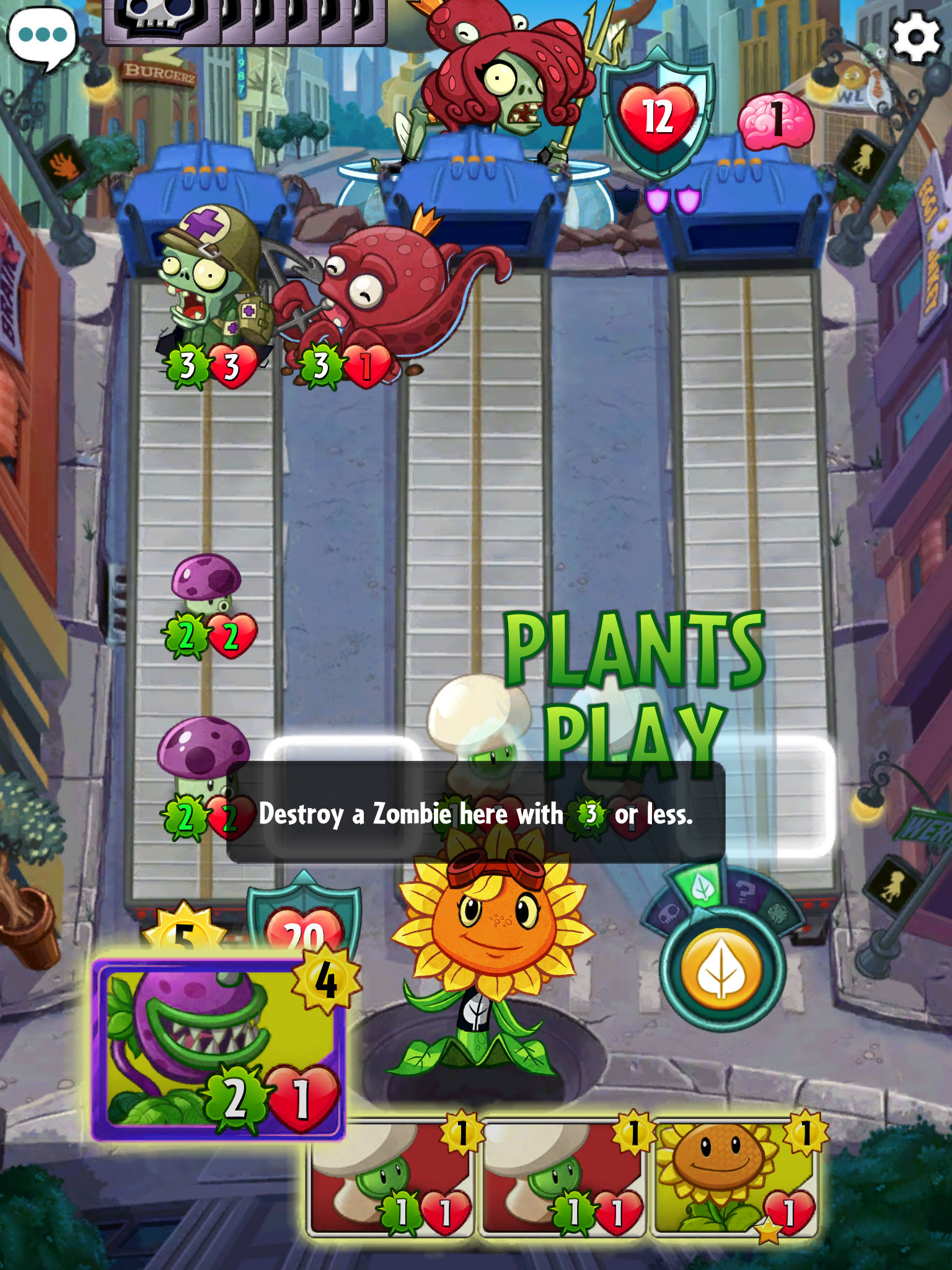 Lanes have always been at the forefront of the Plants vs. Zombies games on mobile, and Heroes is no exception there. When you look at the playing field, you’ll find your hero at the bottom, your opponent at the top and five lanes in-between.

On each turn, you’ll be able to spend sunlight (if you’re on the plant side) or brains (for the zombies) to play cards into those lanes. When it comes time for the final phase of each turn, any character in a given lane will attack whatever is on its opponent side of the lane. Though there are exceptions, if the attack value of a plant or zombie — the first number in green — is equal to or greater than the health of its target inside the red heart, that character will be defeated and removed from the board. Both sides get to attack, though, so even vanquished plants or zombies get off one final shot.

Some lanes alter the game in different ways. Elevated lanes are considered heights, and grant bonuses to specific cards played there. Other lanes are underwater, and only cards with the ‘Amphibious’ trait are allowed in them.

Since Plants vs. Zombies Heroes has a variety of different boards with unique lane layouts, be sure to study new ones before you start playing cards. You could be in for some unpleasant surprises if you don’t. Also, if for some reason you are unsure about who a character will attack before you play it, simply hold it over the lane you are thinking about using and you will see a small battle symbol pop up that will either highlight an opposing character or the hero as your target.

Fantastic Superpowers and Where to Find Them 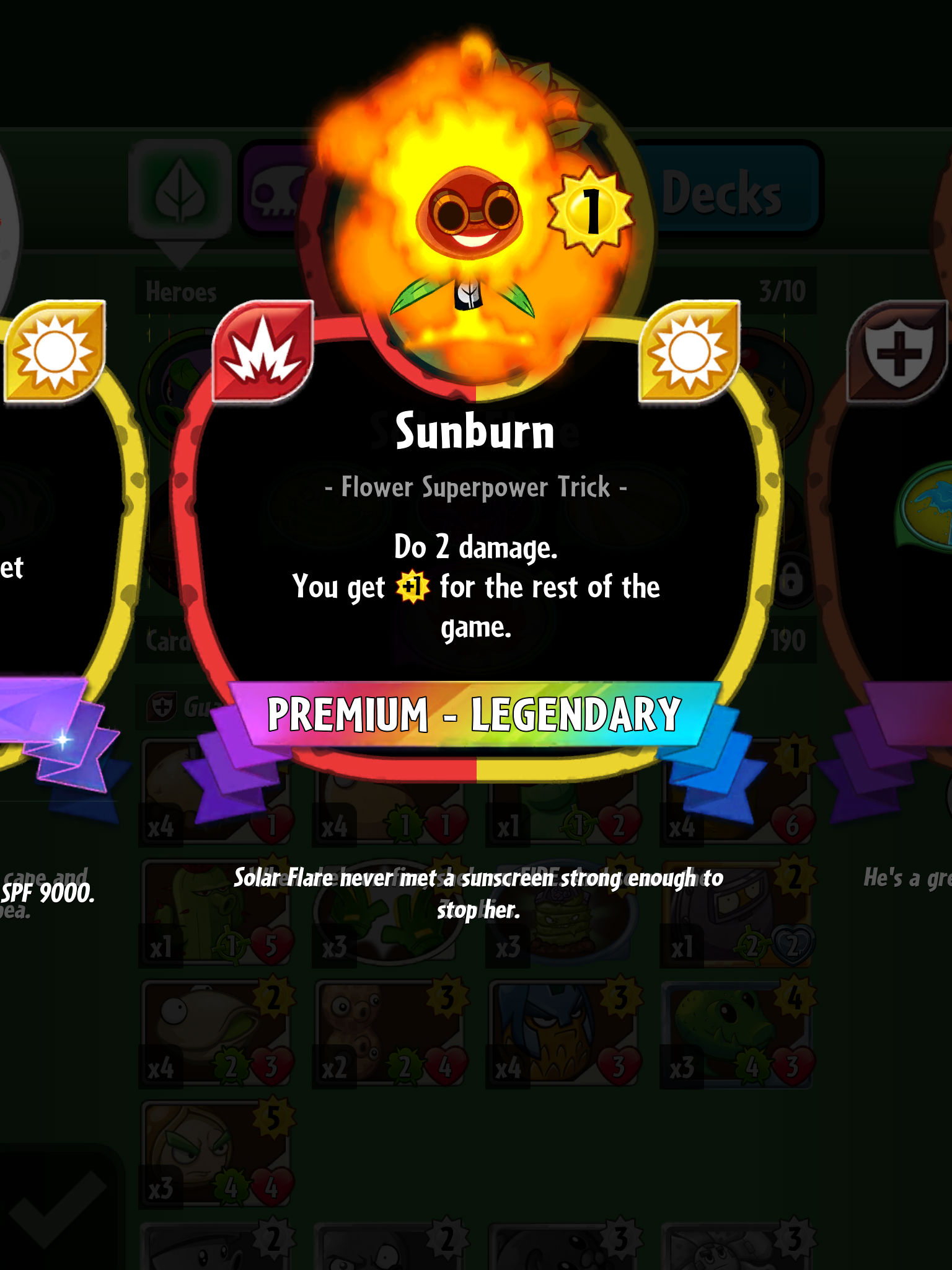 It wouldn’t be much fun if all of the heroes played the same way, and fortunately that’s not the case at all. Heroes are differentiated by the types of cards they can use, with each hero able to use two of the five card classes available to plants or zombies. They also have a mix of different superpowers: four in all, including one that is unique.

Superpowers come into play in two ways. You’ll always start the game with one at random. You’ll receive another each time a Super-Block is activated, and since you get three of those per match, you could end up seeing all four superpowers eventually.

What’s the Super-Block? Every time your hero takes damage, you’ll see one to three sections of the meter around your health total fill up (it looks like a little shield). Once that meter fills, your hero will automatically block the incoming damage and you’ll receive one of your remaining superpower cards.

There’s a small catch: You can play the superpower right away for free by swiping it onto the board or save it for later by dragging it down into your hand. If you decide on the latter, though, you’ll have to pay resources to play it in a later turn.

Men … er, Plants and Zombies on a Mission 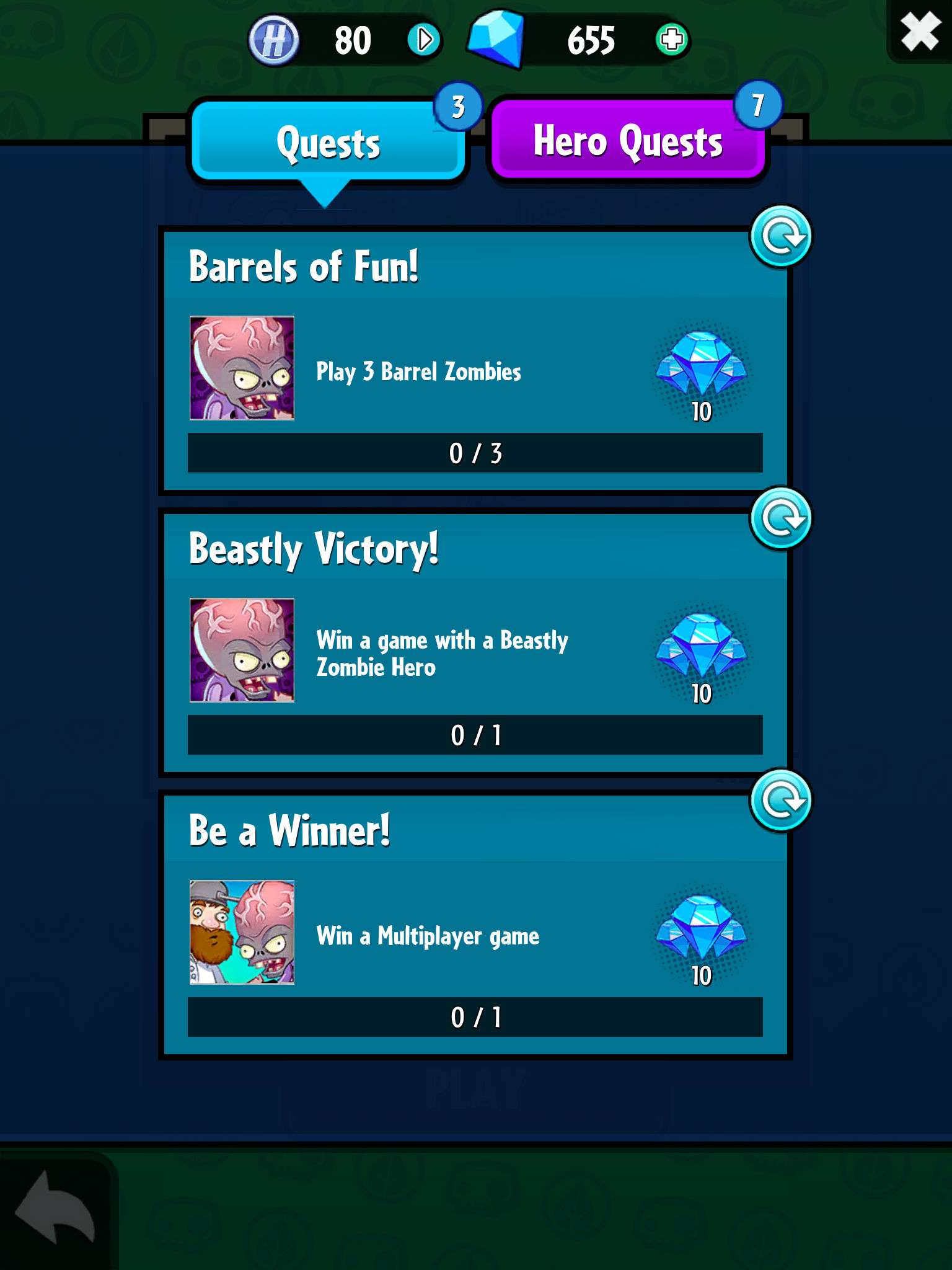 As a Plants vs. Zombies beginner, the first thing you’ll be exposed to is the single-player Plant Missions. These are presented as a series of different five-part challenge levels, with the final stage always being a boss battle with an enemy hero who has extra health, characters already in play or some other built-in advantage. You’ll also unlock the Zombie Missions in due time just by playing enough battles.

Before you head into a Mission, you can choose any available deck in your collection by tapping on the bar (which appropriately enough, says ‘Choose a Deck’) below the map screen. You can also edit the selected deck by tapping on the small pencil icon in that bar.

Playing Missions is a good way to collect coins and work on Quests. What, we haven’t talked about those yet? Let’s rectify that …

Your current Quests can be found by tapping on the exclamation point icon at the top of the game’s main screen. General Quests can be completed in either single-player or PvP matches and can range from very simple (Win a Multiplayer Game) to a bit more specific (play 3 Barrel Zombies). New Quests arrive every few hours to replace the ones you’ve finished. You can also replace a Quest you can’t or don’t want to finish with another one by hitting the arrow icon next to it, but there’s a limit to how often you can do this.

You’ll also see a separate tab for Hero Quests for every hero you’ve unlocked so far. These are presented as a series of tasks that you need to complete in order with each hero, again in either single or multiplayer battles.

Both kinds of Quests can be helpful as you look to increase your stockpile of Gems. And since you need them to open Premium Packs and get the sweet, sweet rare cards inside, it’s a good idea to have Quests in the back of your mind at all times. 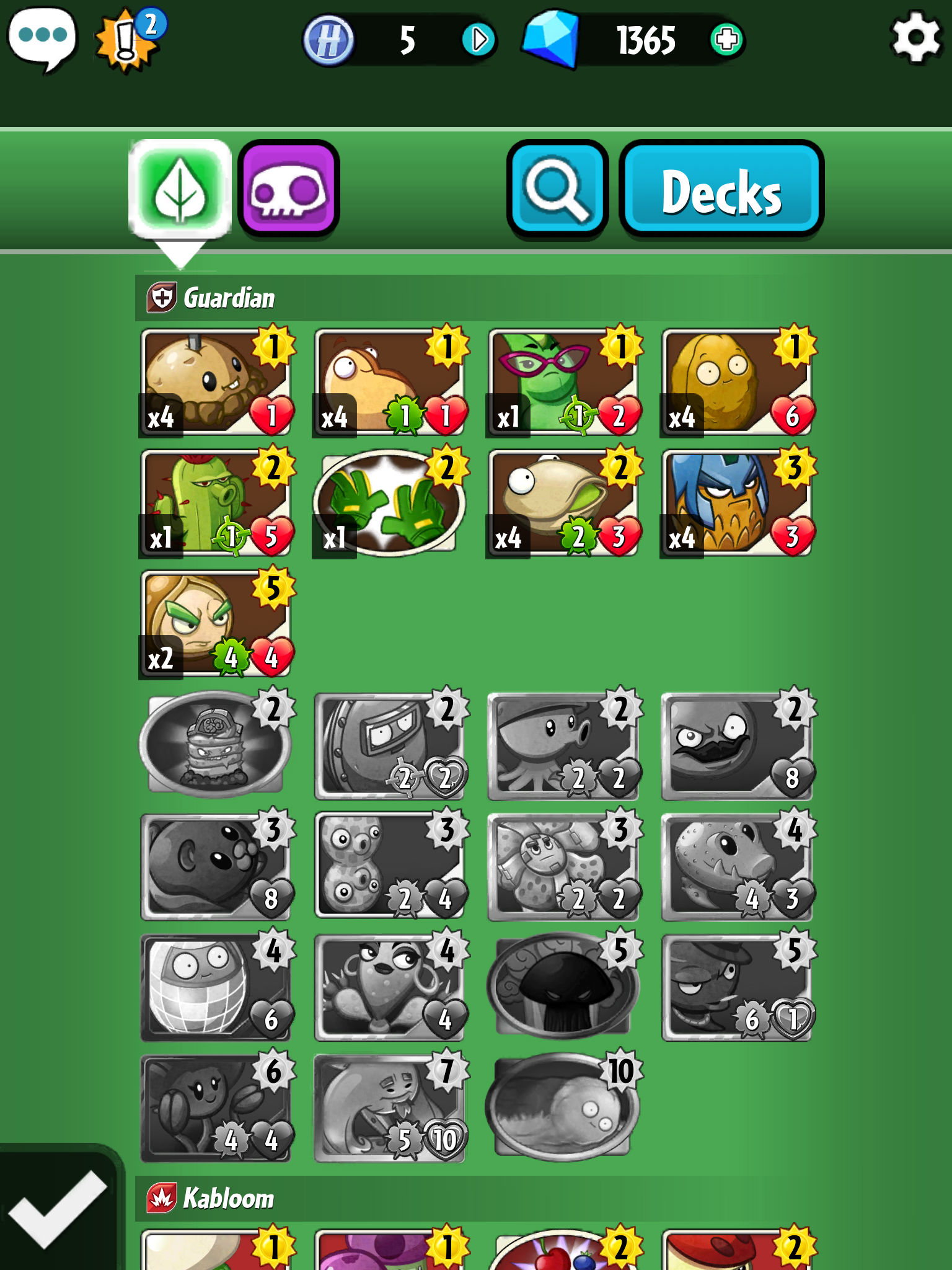 The starting decks that you get for each hero are already pretty well balanced. That doesn’t mean you can’t make them better by tinkering with them a little — or a lot — once you get your paws on more cards.

Notably, none of the rare or better cards are in these decks. How can you rectify that?

By opening Premium Packs, that’s how. Those packs can be had for 100 Gems each, or for bundles that give you bonus packs. For example, at launch, the game offers 11 packs for 1000 Gems, 23 packs for 2000 Gems and 60 packs for 5000 Gems. That last deal is obviously the best value, but your need to improve your decks might prevent you from waiting long enough to collect that many Gems.

To modify a deck, you want to hit the ‘Collection’ icon (it looks like a card binder) on the game’s main menu, then tap the ‘Decks’ button. Here you’ll find the default decks at your disposal labeled with the hero name and #1 (i.e. Solar Flare #1). You can tap the pencil icon to change the cards in any of them or hit the big blue button at the top to create a new deck from scratch.

While a complete guide to building effective decks is a topic large enough for its own article, one thing that can help you out in the early going is to use the default decks as a guide to a proper resource curve for each hero. If the first Solar Flare deck as 15 cards that cost 1 Sun each, there’s a reason for that. Loading up a deck with significantly more expensive cards is going to ruin your chances of using the ones you draw effectively.

A Quick Guide to Card Text and Traits 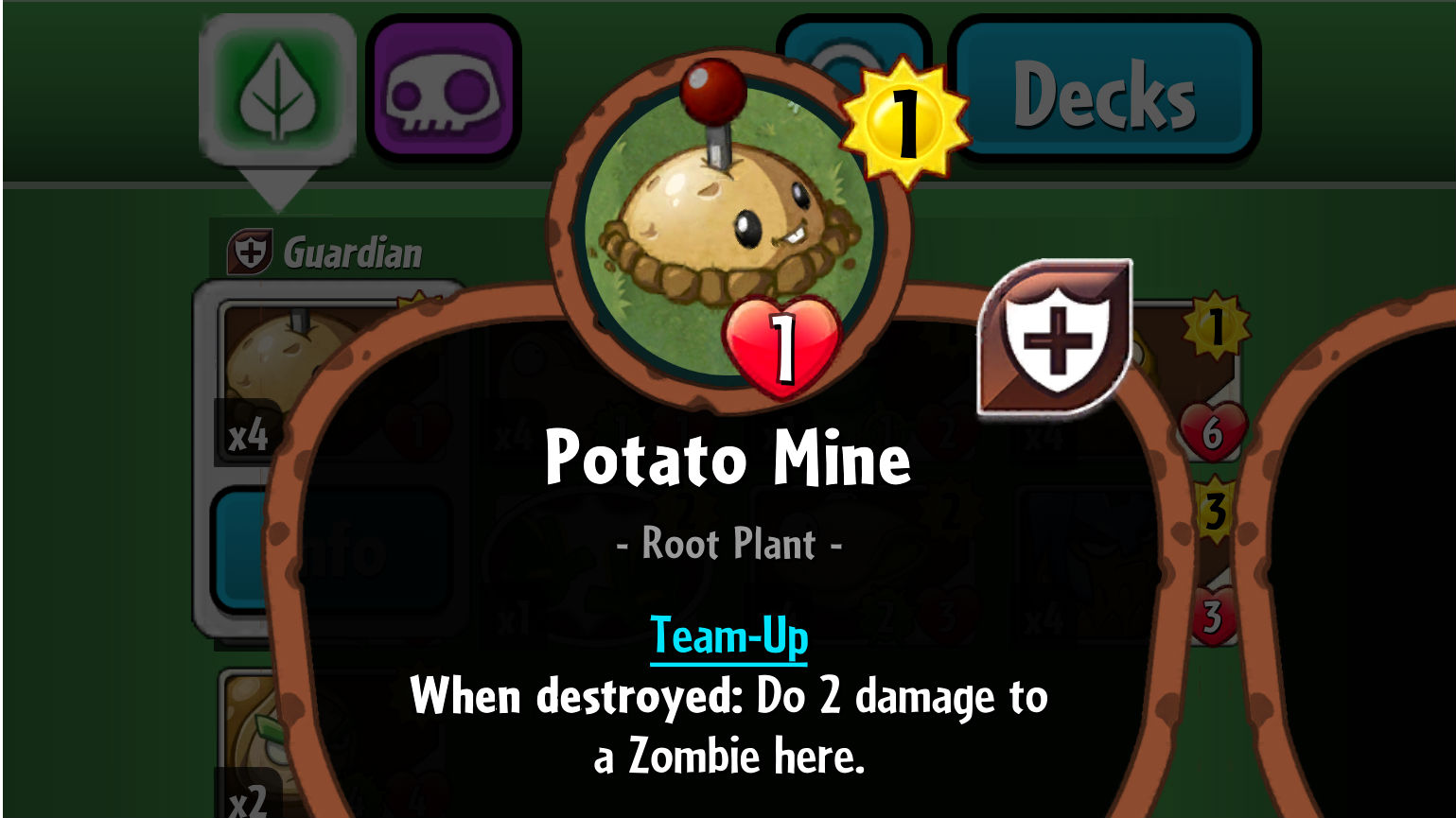 Like many collectible card games, Plants vs. Zombies Heroes makes use of both descriptive terms and special card traits on almost every card that help form the basis of effective combos. The descriptive parts are right under the card name. For example, the Potato Mine is called a “Root Plant,” which means that any ability that effects either Roots or Plants used by either player affect him (at least I think it’s a him).

Traits might be even more important. You’ll see them as blue links upon which you can tap in a card’s profile that explain extra things it can do. Not every card has any Traits, but many of them — especially Rare and better cards — have multiple Traits.

Those links can help you figure out what every Trait does, but we can make it even simpler for you by compiling them all in alphabetical order for you right here:

With out belaboring the point, it really is crucial to understand all of the Traits, even if your deck of choice isn’t super dependent on them. It’s common to see beginning players play plants or zombies against Armored characters, for instance, and then get surprised when they fail to do enough damage to remove them from the board. 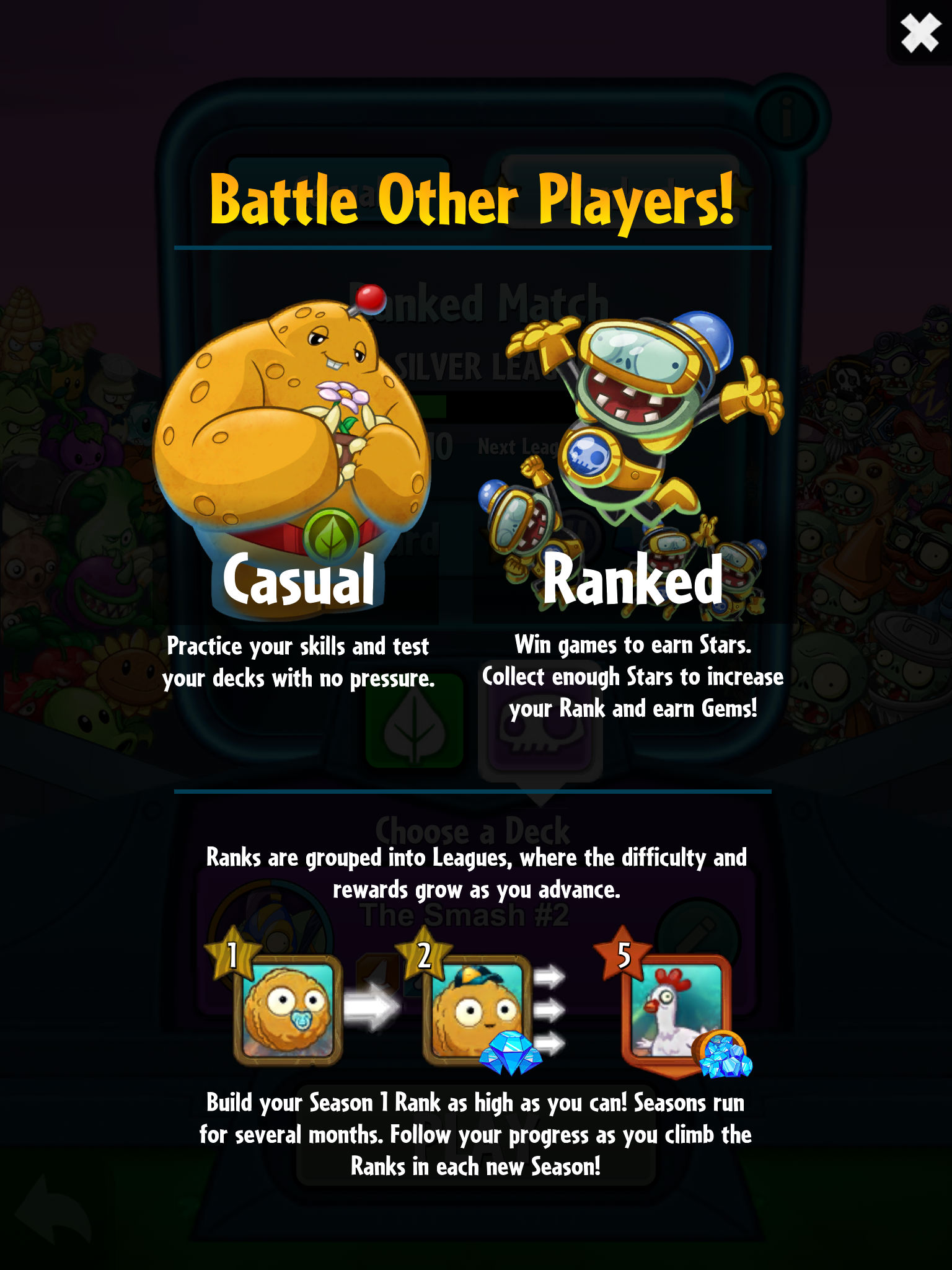 Head-to-head matches against other players are highlights of nearly every CCG. Plants vs. Zombies follows a familiar formula by presenting them in two different varieties, both of which can be accessed by tapping the large yellow ‘Battle’ button from the main menu. You can’t miss it.

Casual matches have the lowest stakes, yet you can still win coins by playing them. Ranked battles challenge you to climb up through a series of leagues of players who have experienced roughly equivalent success in PvP play. They award coins but also can win you Gems when you move up to the next tier.

But as De La Soul once said, the stakes is high in every Ranked duel. Winning a duel earns you two stars, plus an extra one if your previous Ranked match was also a victory. From tier 10 and up, every Ranked loss takes one star away from you.

Even if you don’t plan on making PvP a big focus, it’s worth it to give Ranked matches a shot, because you can work on your Quests while doing so. That way, even if you end up racking up more losses than wins, you’re accumulating more premium currency and hopefully getting closer to more Premium Packs.

It’s even an effective use of your time to play Casual matches with your in-game friends. Just tap the ‘Friends’ icon on the main menu screen, then the ‘VS’ button by any of your friends. If you choose to link your Facebook account to Plants vs. Zombies Heroes, you’ll see FB friends on this list automatically, and you can also search for and invite people if you know their usernames.