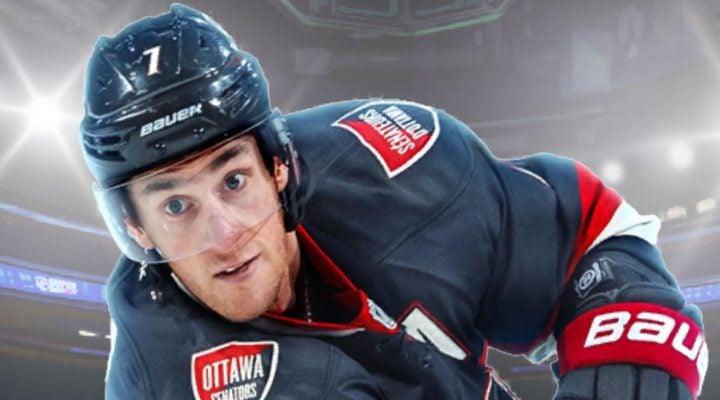 It’s time to lace up the skates once again. In real life if you want, but that can be expensive and cold and give you bruises if you fall or get hit by another hockey player. NHL SuperCard 2K18 is a lot safer and easier way to try for hockey glory.

Like 2K’s other SuperCard mobile games, the object of NHL SuperCard 2K18 is to build the best possible team of real NHL players from a wide variety of different cards. All of the NHL’s teams are well represented in the game (yep, even the brand spanking new Vegas Golden Knights), so you can assemble a true dream team of talent from around the league.

And your team isn’t just for gazing at and admiring its awesomeness, as you take it onto the virtual ice in multiple game modes, all of which can earn you more cards for the purpose of making your team even better. To help you on your way, we’ve put together these NHL SuperCard 2K18 Tips, Cheats and Strategies to have you skating circles around your opponents. Again, in the game, probably not in real life. 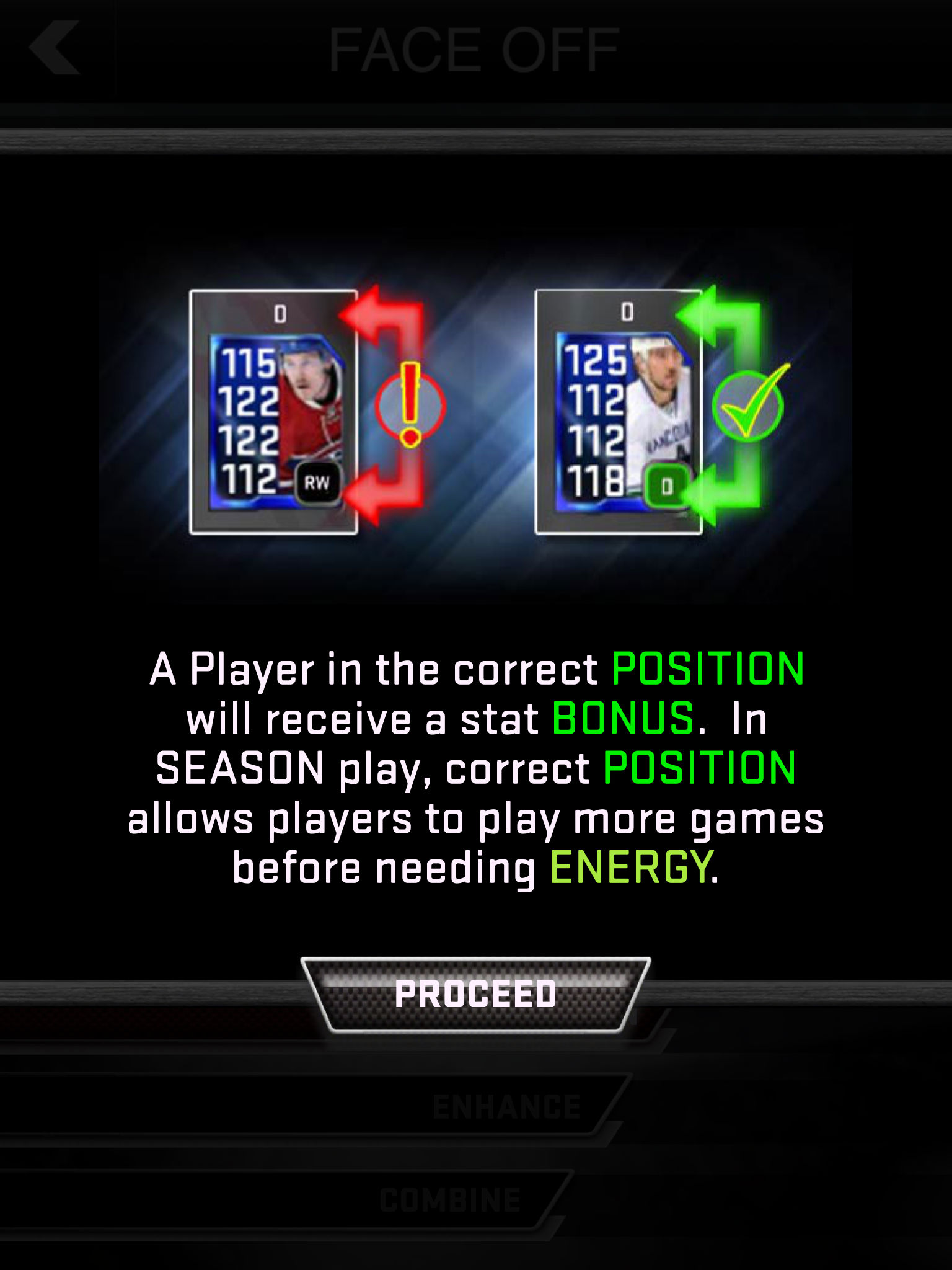 The player cards at the heart of the game are all rated in four different stats that come into play in every game mode. These stats are:

Both the Face Off and Quick Game modes make use of these stats in direct comparisons to players on other teams. Each game/match involves you being asked to pick one or two of your players and matching one or two specific stats against those of opposing players — not always the same ones, as your cards’ Stickhandling could be up against your opponent’s players’ Skating, for example.

If your stats are higher than your opponent’s, you win that period. Winning two or three periods will win you that game, while losing two or three earns you the ‘L.’ Ties are also possible and resolved in overtime periods. Support cards can be used once per game to give temporary stat boosts, and players also have special skills that will activate a certain percentage of the time, but generally speaking, your stats are what they are, and most of the gameplay in NHL SuperCard 2K18 simply requires you to pick the right players at the right times.

Bonus Tip: Position matters. While you can play any player at any position (except goalies), they get a stat boost if they are playing their natural position. Unless you have a super powerful card that can help you win while playing elsewhere, try your best to keep everyone in the lineup in their preferred positions. 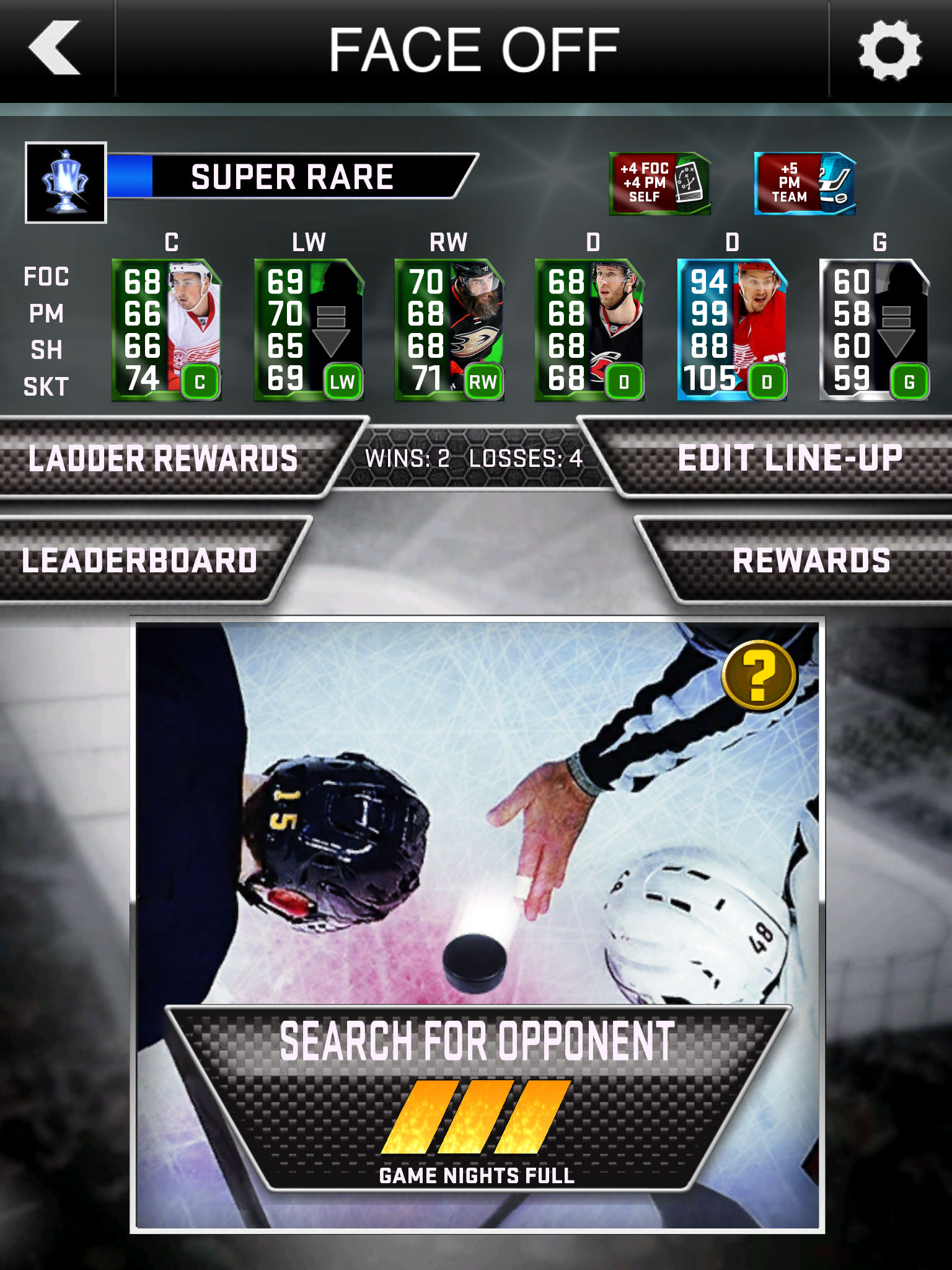 NHL Super Card has, at least to start, three different game modes. Two will be familiar to you if you played any of 2K’s previous SuperCard games, particularly Quick Game, which simply lets you play an instant game against your choice of one of several player-owned but AI-controlled teams. It’s useful mainly for grinding out additional cards, and the nice thing is that there are no restrictions on how often you play it.

Season Play is an extended simulation involving 29 other players all competing against you for the Stanley Cup. You don’t make decisions for the games in this mode; rather, they are simulated based on the lineup you set, which requires three cards at every position and three support cards — if you don’t have at least 21 cards, you can’t play this mode. The key to success in Season Play is to use the Energy cards earned from the other modes to restore your players’ energy at regular intervals to keep their stats as high as possible, which you  can do simply by tapping the ‘Manage Season’ button and dragging an Energy card onto a player. Rewards in this mode are given out at the end of the season based on your final finishing position.

If you like new stuff, and you should, the most interesting mode will be Face Off, which is SuperCard’s answer to live PvP as you play a standard three-period game against a human opponent. The gameplay is exactly like Quick Game except that you have a timer for each decision to keep the game moving. There’s also a limit on how many games you can play in Face Off mode at any given time: a maximum of three, though your available games refill quickly in just a few minutes.

Playing the Board: All About Post-Game Rewards 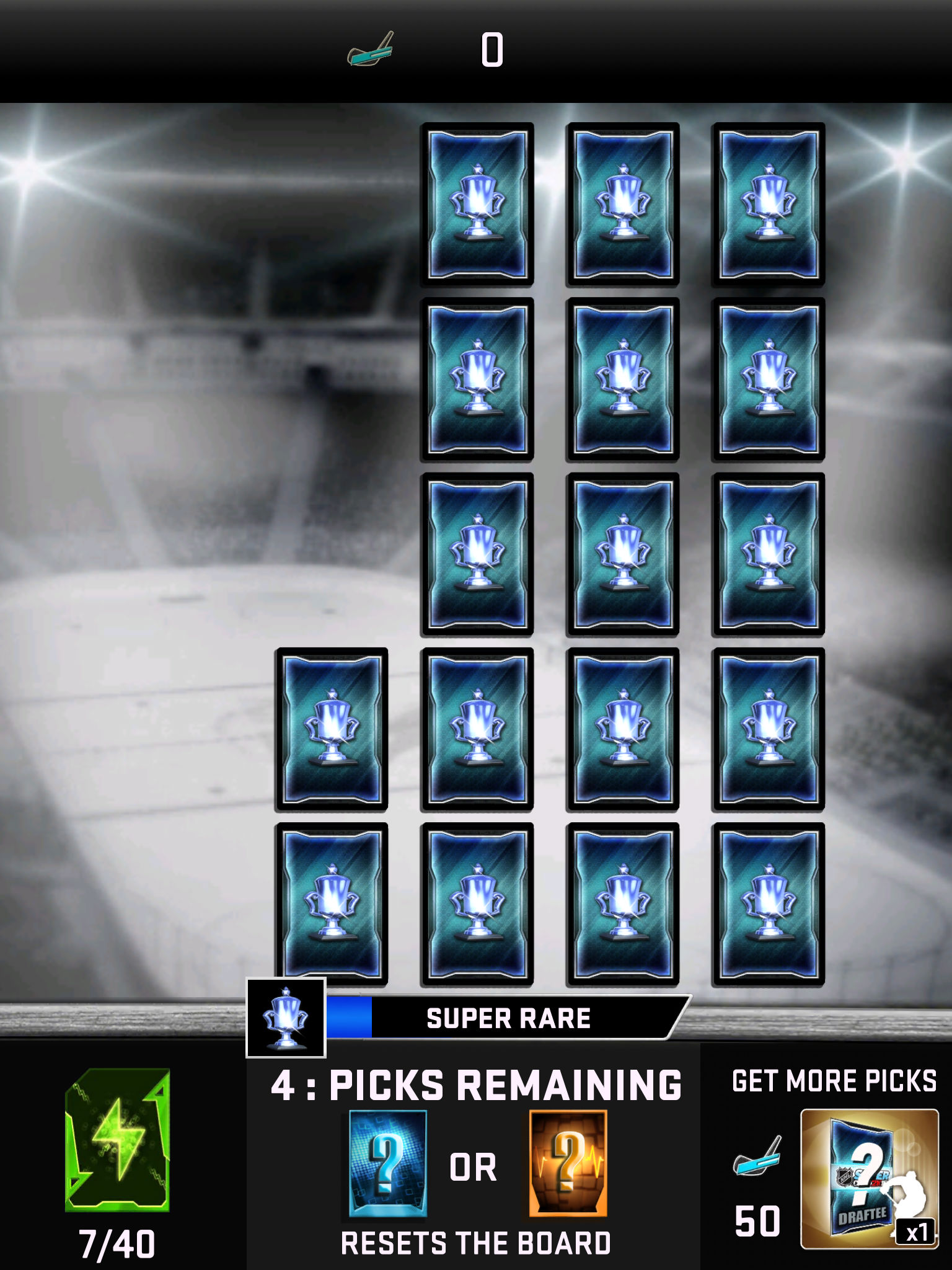 In both Quick Game and Face Off modes, you’ll get a chance to choose cards from a selection of 25 face-down cards. In Quick Mode, you receive one pick for a loss, two for a win and three if you shut out the opposing team.

Most of the cards on the draft pick board are players of varying rarities. You’ll find mostly Common and Uncommon players, as well as support cards and Energy cards. However, there is always one card of Rare or greater rarity, and finding it immediately resets the board even if you still have picks remaining.

You can determine the maximum rarity of cards on your board at any given time by looking right beneath the cards. It’s based on the overall strength of your current lineup, so the better your team, the better the best card is on the board. Eventually, you can work your way up so even Epic or Legendary cards are possible rewards.

Finally, Face Off has its own twists. Not only do you receive three picks for a win, but there are also Light the Lamp Spinners hidden among the cards. Finding a Spinner gives you a spin to win one of eight different prizes, including some that you have a much better chance of landing there than anywhere else. Better Spinners can be earned by moving up the Face Off leaderboard or finding the upgrade cards on that mode’s draft board.

Bonus Tip: On the draft board screen, you’ll sometimes have the option to earn four more picks by watching a short video. Simply tap the icon in the bottom-right corner of the screen, and about 30 seconds later, you’ll be able to choose four more cards. Since this is more than you’d earn any other way, it goes without saying that you should take advantage of this offer as often as its available. Yes, ads can be annoying, but the payoff here is worth it.

All the Ways to Make Your Cards Better 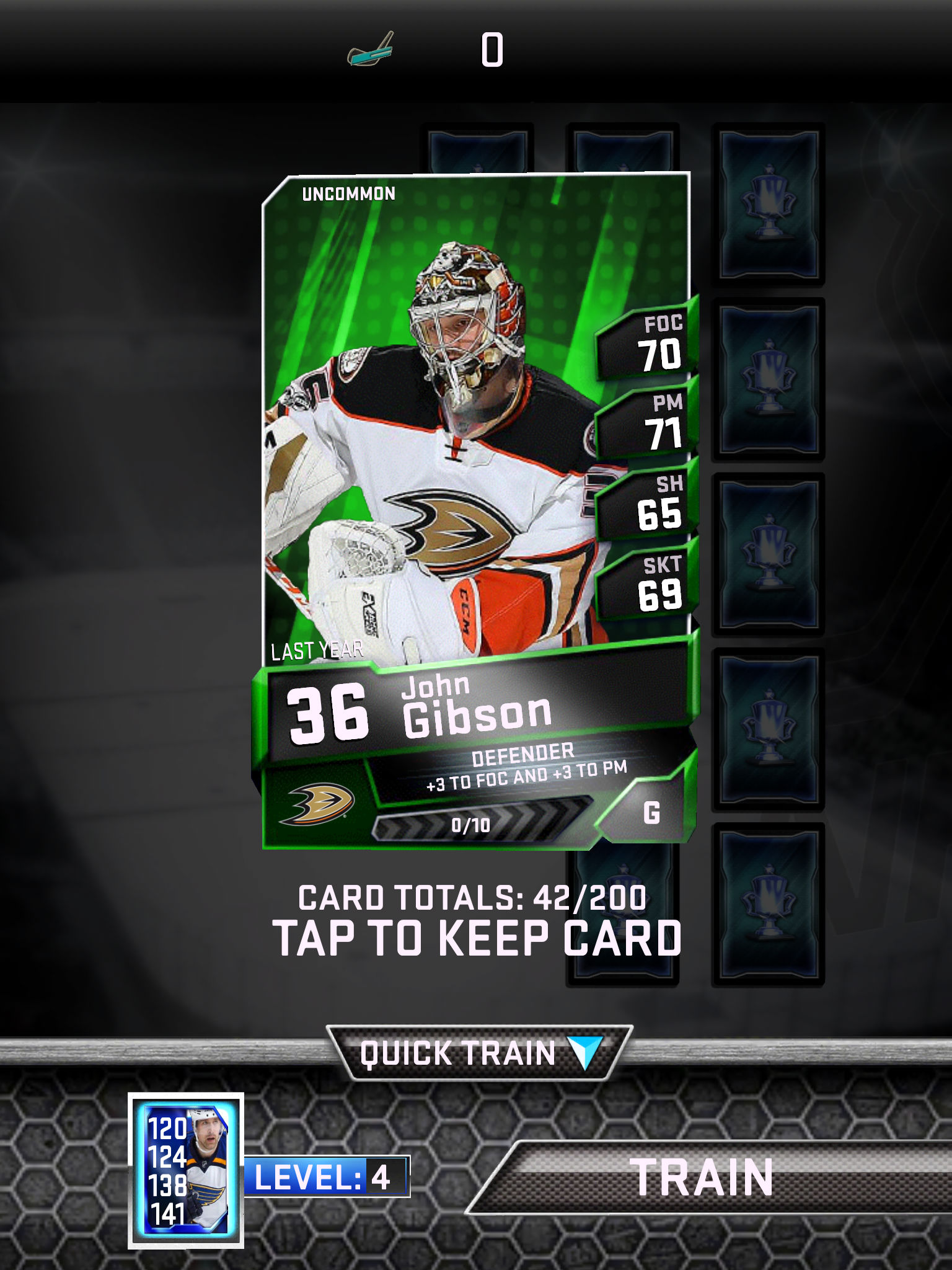 Though in general higher rarity cards are better than ones from lower tiers in NHL Super Card 2K18, you can also take matters into your own hands and make the cards you have better. It starts by using the ‘Train’ feature you can find by tapping on any card in any lineup screen. Training cards requires you to sacrifice cards you don’t have to make the one you want to improve better, up to its maximum level. The better the card you sacrifice, the bigger the training effect.

New for this version of the game is the ability to Quick Train right from the draft board screen. Instead of taking a card you pick to your inventory, you can tap the button at the bottom of the screen to use it as training fuel immediately. This speeds up the process and keeps your inventory from getting cluttered up with lower rarity cards. You can change the target for Quick Train just by tapping on the card portrait you’ll also find at the bottom of the draft board.

Another option for card improvement is to Enhance a card with special Enhancement cards you’ll find as rewards. Any player of Rare or higher rarity has one or more Enhancement slots, indicated by small circles at the top of their card. Simply tap the ‘Enhance’ button and then choose an Enhancement to slot in to boost one or more player stats. 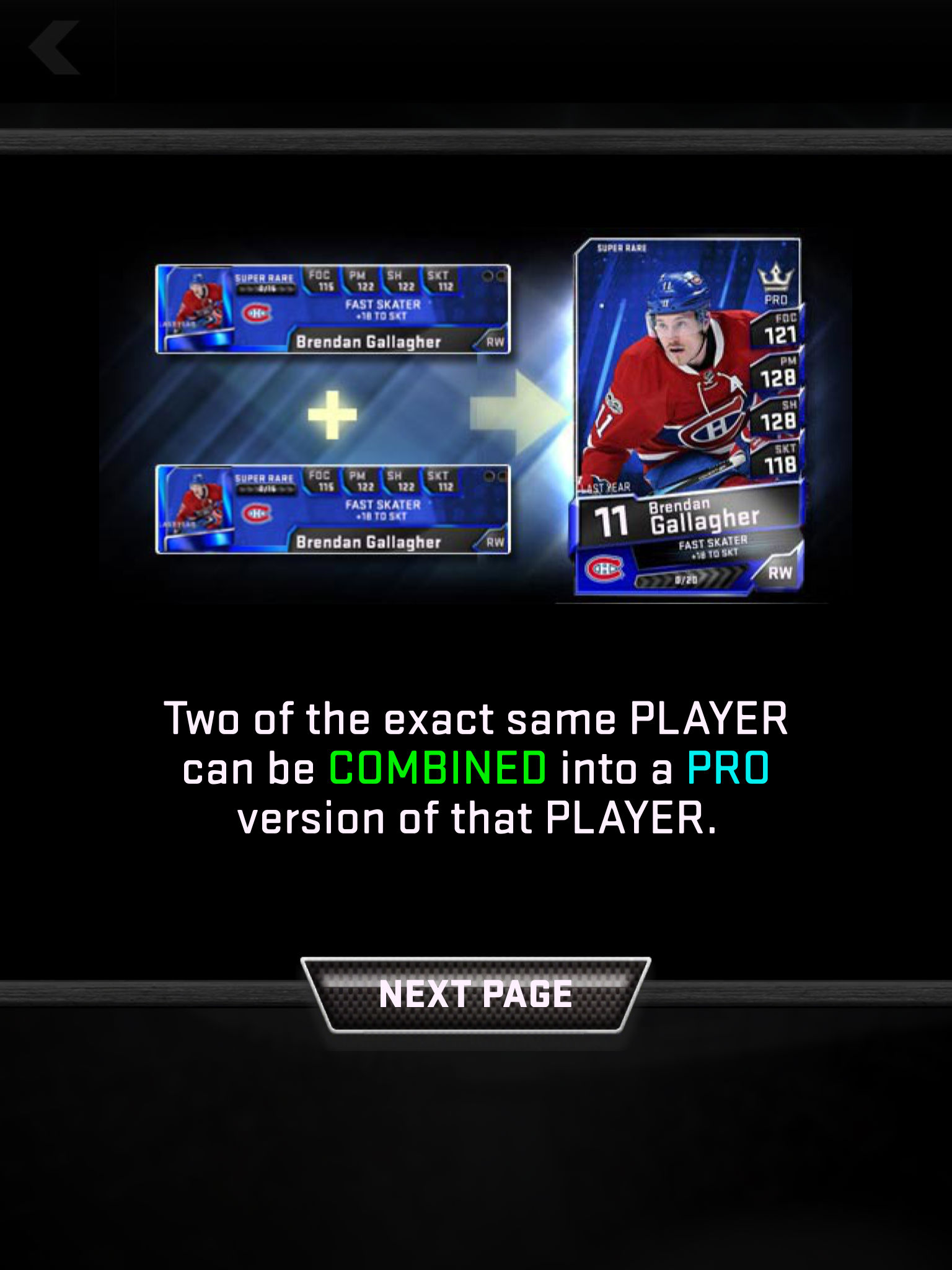 Finally, if you have two copies of the same player card, they can be combined to form a Pro version of that card. You’ll find this option, when applicable, by tapping on the ‘My Cards’ button in the main menu and then the ‘Combine’ button under a specific card — it will only light up when you have two of that card. Pro cards have higher max stats and can be trained to higher levels than their regular counterparts, but you’ll need to remember that nether copy can be in your Quick Game or Season lineup for combining purposes.

Bonus Tip: For the best possible effect, you’ll want to wait until both cards you want to combine are max level. This will make the best possible Pro version of the card, one that is generally even more powerful than a card of the next rarity up. For example, a max level Pro Rare card has higher stat potential than a Super Rare card, so always look for opportunities to level up two copies fully and then combine them. You’ll be glad you did.

Got any more beginner level tips for NHL SuperCard 2K18 you think we missed or glossed over? Be sure to let us know in the comments below.