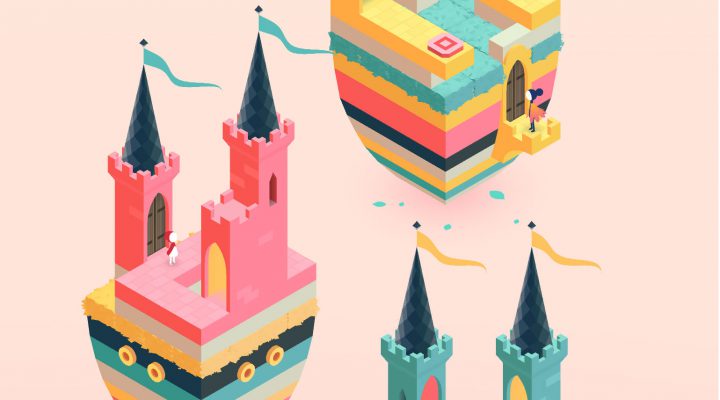 If you’ve played Monument Valley, there’s not too much in Monument Valley 2 that will take you completely by surprise, at least in terms of the gameplay. The crow people are gone and there are a few new twists, both figuratively and literally, but helping Ro and her daughter navigate mind-bending levels is accomplished in much the same way as the first game.

Let’s assume though, for the sake of argument, that there are people taking their first steps into ustwo’s amazing world with the sequel. Not only are those people in for a delightful if somewhat fleeting treat, they also might need some assistance figuring it all out.

As luck would have it (and by luck, we mean our editor-in-chief insisted), we’ve already worked our way through the game to provide you with the following Monument Valley 2 Tips, Cheats and Strategies. It’s not a complete walkthrough — we’ll have one of those too for people who would like step by step instructions on specific levels — but rather a general guide to figuring out how to work your way through the Valley.

No Level is Impossible 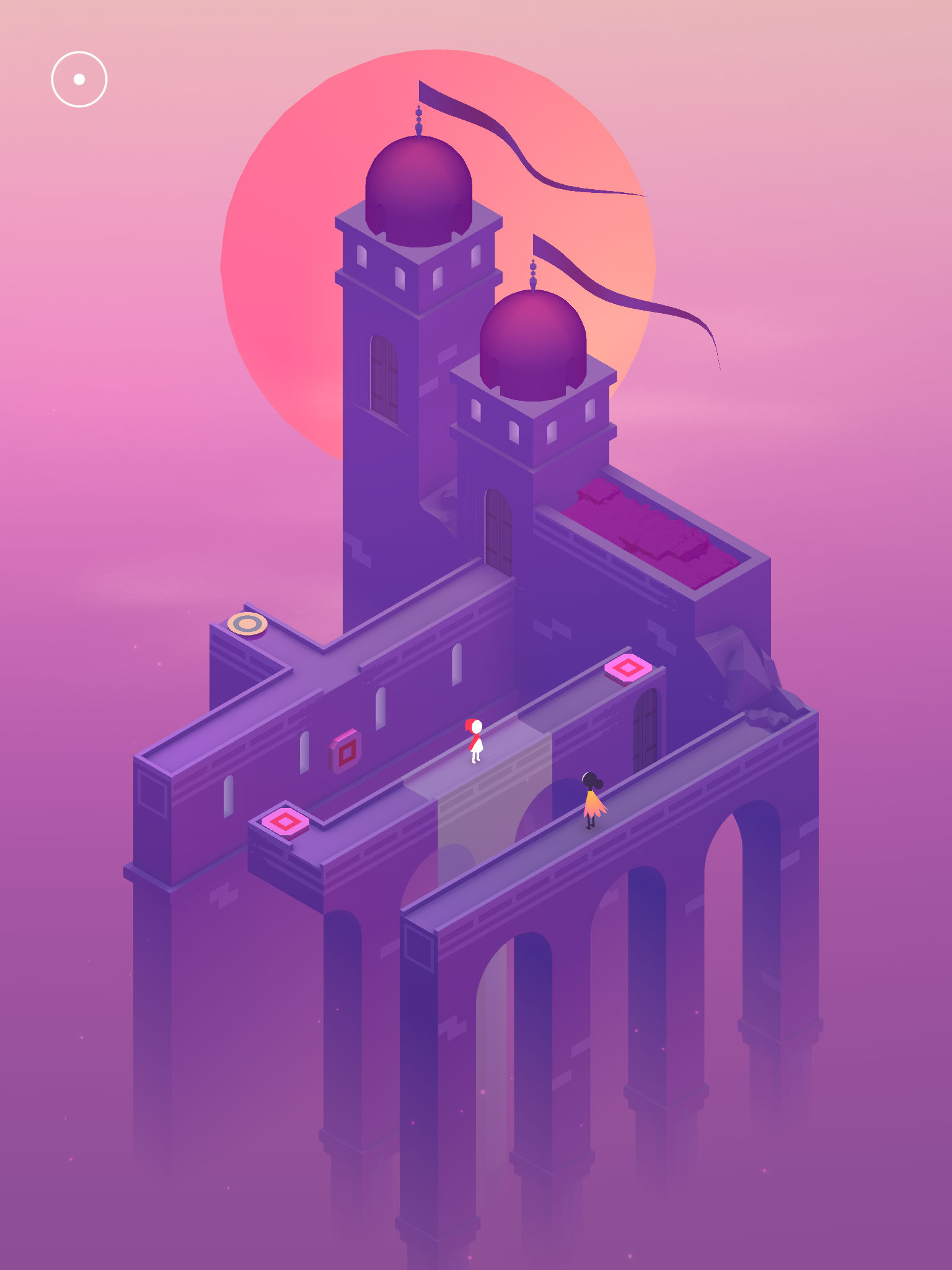 This is the most important thing to keep in mind when playing Monument Valley 2. We won’t even accept arguments to the contrary.

Though it may stymie you at times, this is not a game that wants you to fail. It would prefer to have you keep progressing, even if it might take a bit longer to do so in some levels, so you can experience its compelling narrative.

So don’t worry about making a misstep. There’s nowhere you can go that leads to an absolute dead end, and even if doors close or pieces of the landscape disintegrate or fall away, that’s by design. Concentrate on moving forward and not worrying about what you left behind, and if you find yourself needing to retrace your steps, you can take advantage of that if it’s allowed.

Tap to Step With Confidence 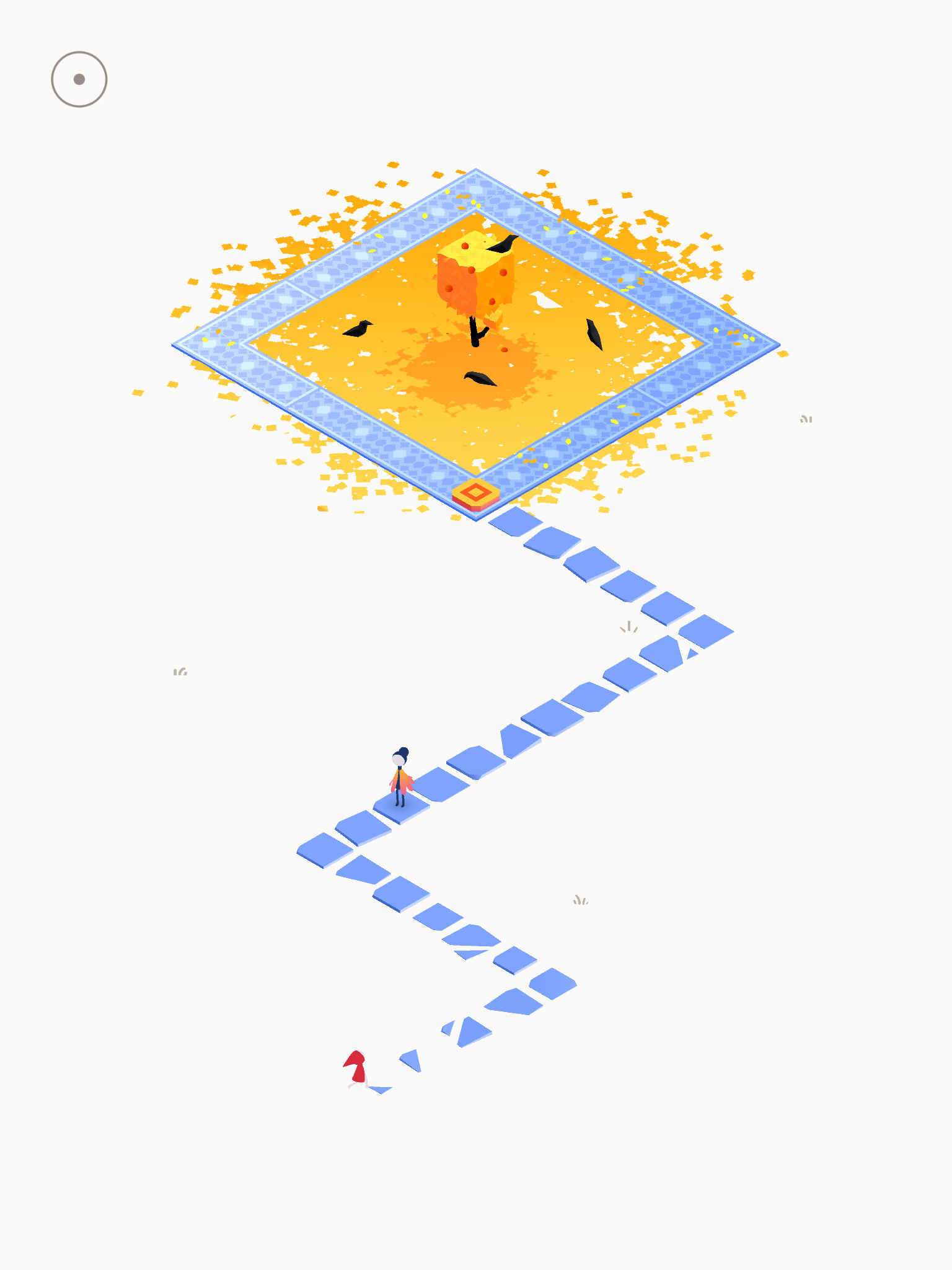 Ro (and her daughter, in some parts of the game) can be moved to wherever you want her to go just by tapping on the screen. Though you can move the characters with short steps or simply tap somewhere and send them as far as they can travel, and as we’ve already noted, there’s no place you can send them that they can’t come back from if that’s required. When one door closes in this game, another one will literally open.

Sometimes the game’s unique way of playing with our spatial perception can be confusing, especially when it comes to pathways that don’t look like they should be at the same height or when the characters start walking sideways or upside-down. In these cases, it can be helpful just to tap on a point on the board and see if Ro or her daughter move there. If they can’t, they will stay in the same place, so it’s a good way to tell if you can reach a given point if you aren’t sure.

Bonus tip: In early levels, Ro’s daughter will move with her or mirror her movement if separated. Without spoiling any plot developments, that might not always be the case later on …

Monument Valley 2 features a number of ways in which you can affect the puzzle environment to allow the characters to reach places they can’t when a chapter begins. In fact nearly every puzzle in the game requires the use of one or more of these, and while this isn’t an exhaustive list (again, for spoiler reasons), here’s what you can expect to encounter most often. Note that these might not be the official terms the devs use for these objects, but they’re what we called them as we played through. 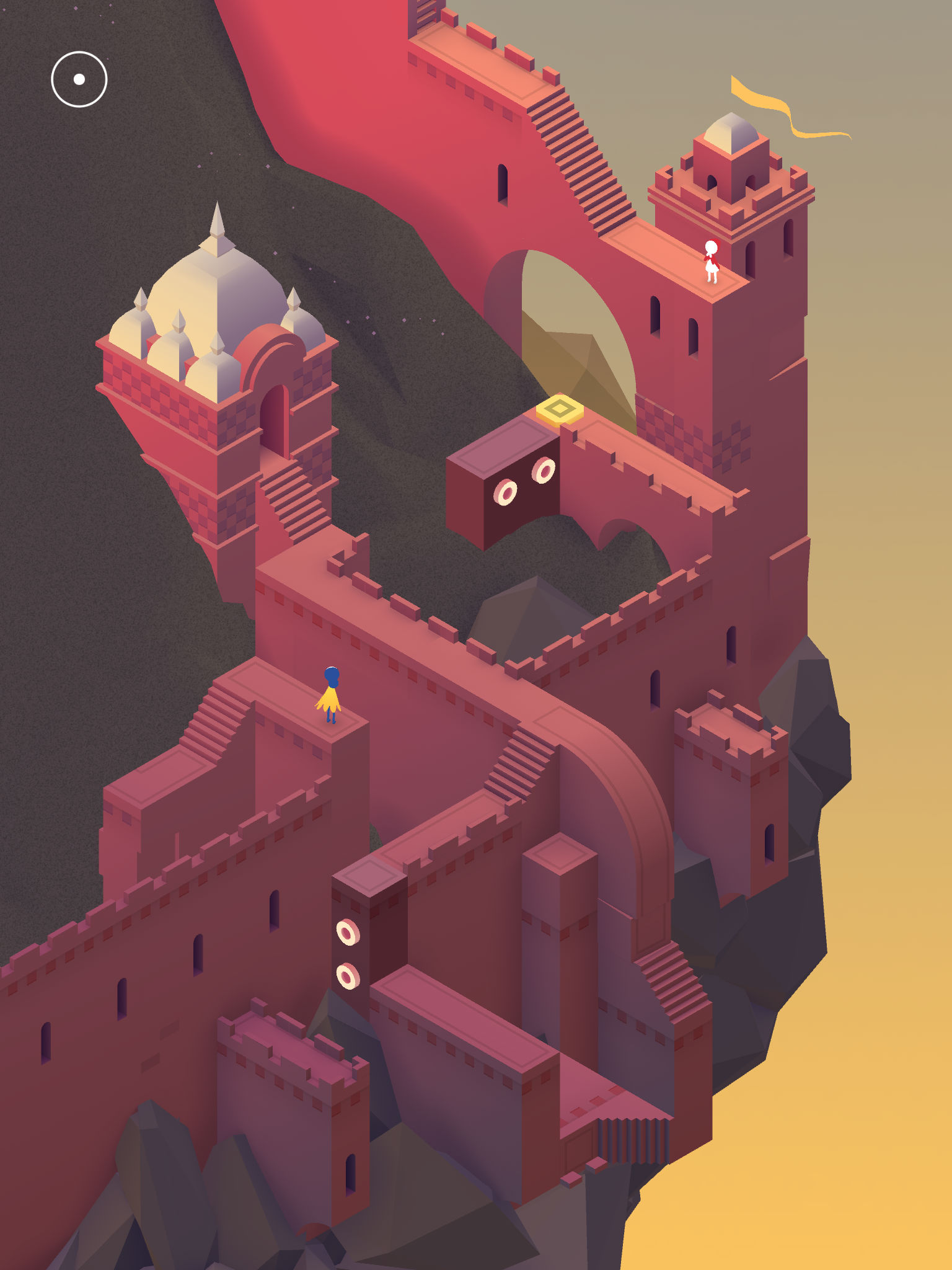 Sliders look almost like little LEGO bricks and have two or more small circles on the part of them where you can tap and hold to move them. Most often, sliders work in strictly horizontal or vertical fashion. However, there are also sliders that rotate, so you can tap and drag them to revolve a certain element of the level. Note that sliders can move with characters on them, which comes in handy — and sometimes is absolutely necessary. 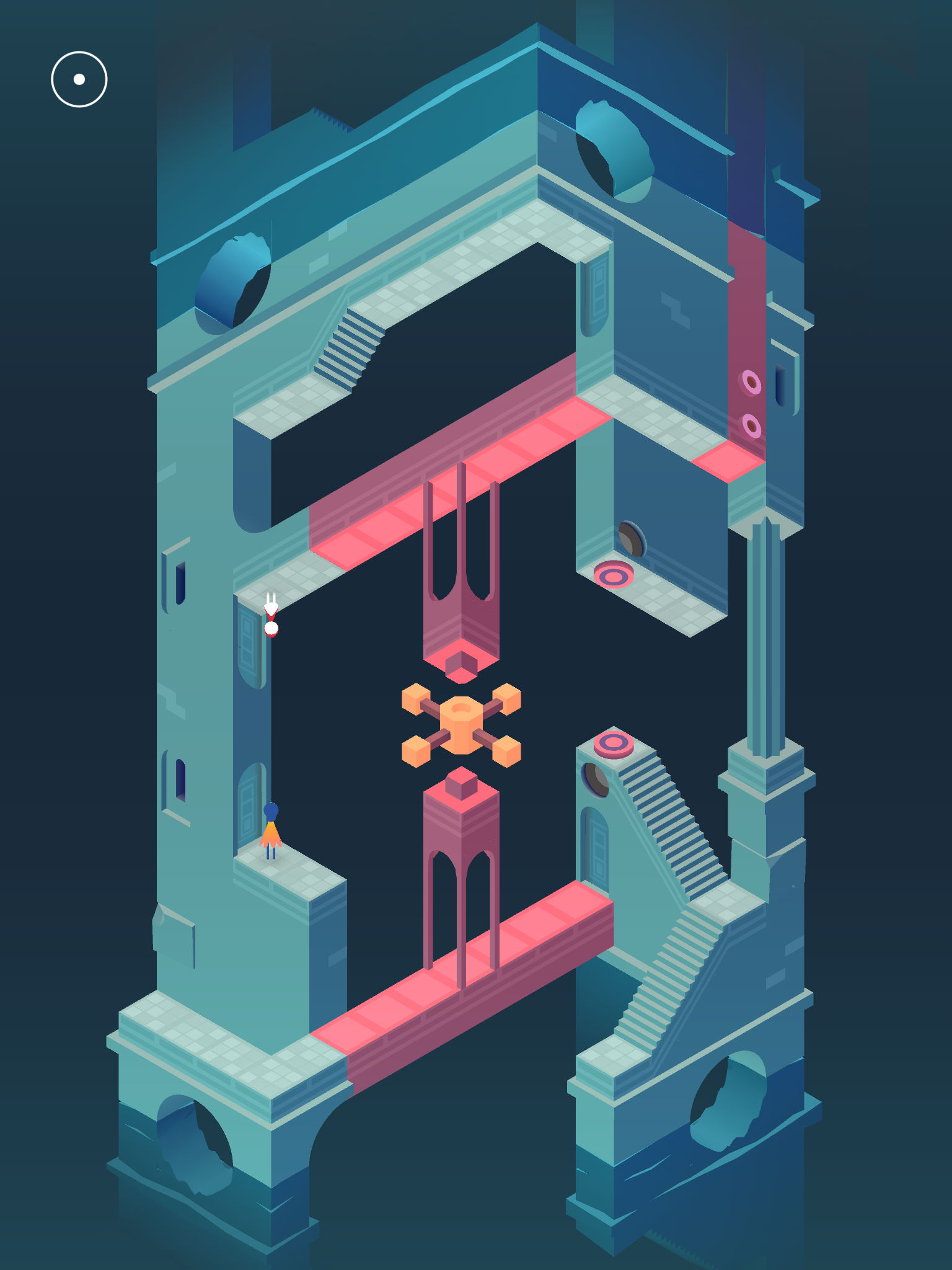 Kind of the cousin of the rotating sliders, cranks can be identified because they look like handles.Just tap and hold to turn them. The big difference with cranks is that they can’t move when characters are on the element they affect, and the handles will automatically disappear when they can’t be used. This means you’ll have to think ahead when planning their use.

Monument Valley 2 has both round and square buttons, activated when a character (or the totem, which is kind of like a character) is on top of them. Sometimes they work like switches, moving or opening something and having a lasting effect. Other times, their effect will only take place when a character is on top of them; in chapters with both Ro and her daughter or with Ro and the totem, you might need to keep one character on the button in order for the other one to get somewhere. 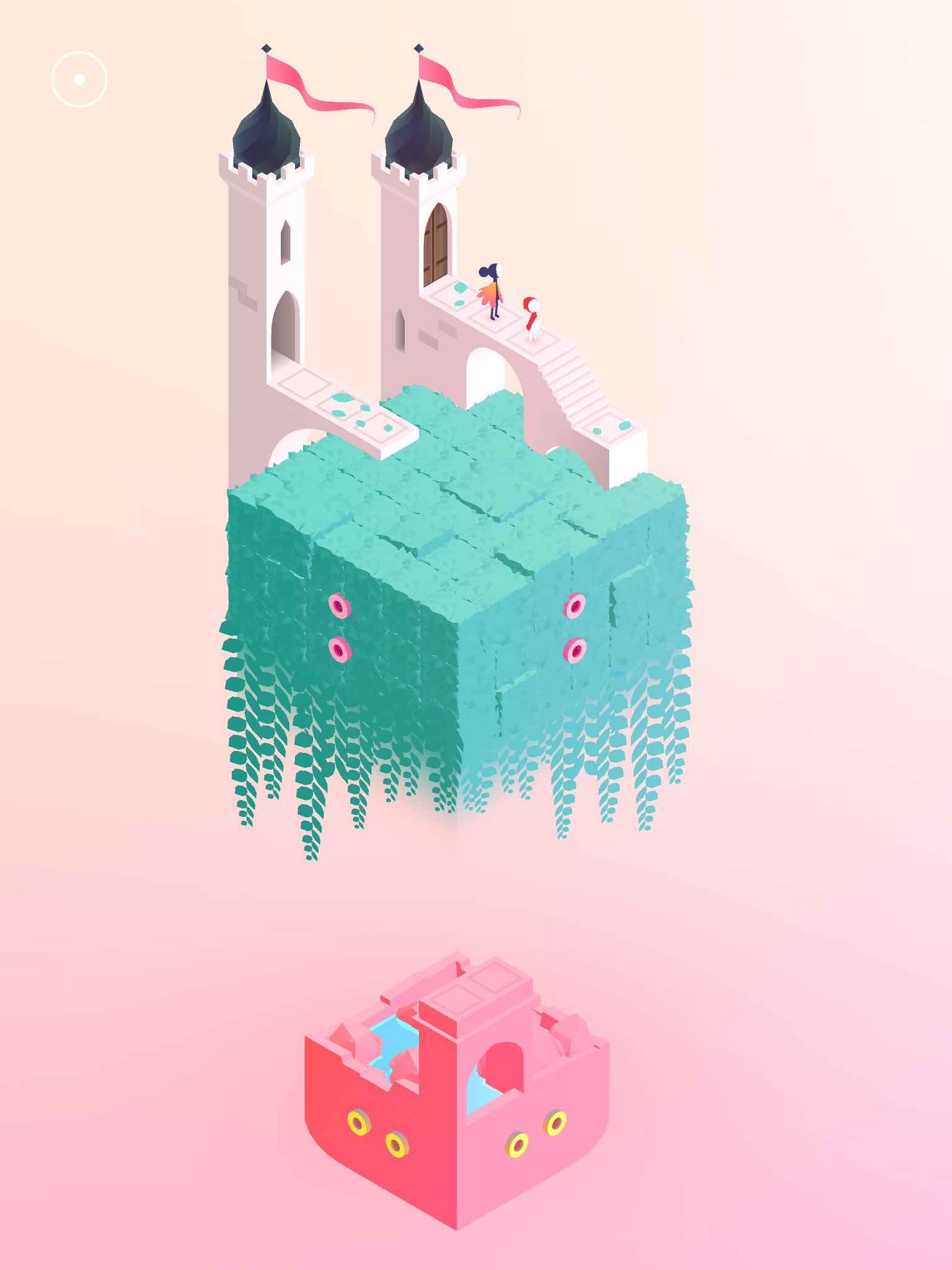 Sometimes plant life can help you out too. In Chapter V, The Archipelago, you’ll encounter green, mossy areas with slider handles on them that you can lift up and down to encounter new areas of the level beneath. In this case, you can’t walk on the plants and need to stick to the pathways, but in later areas of the game, you can climb right on the vegetation if it lines up with your current path. As we noted before, if in doubt, just tap on something and see if the character can walk onto it. You might be pleasantly surprised.

Your Friend, the Totem 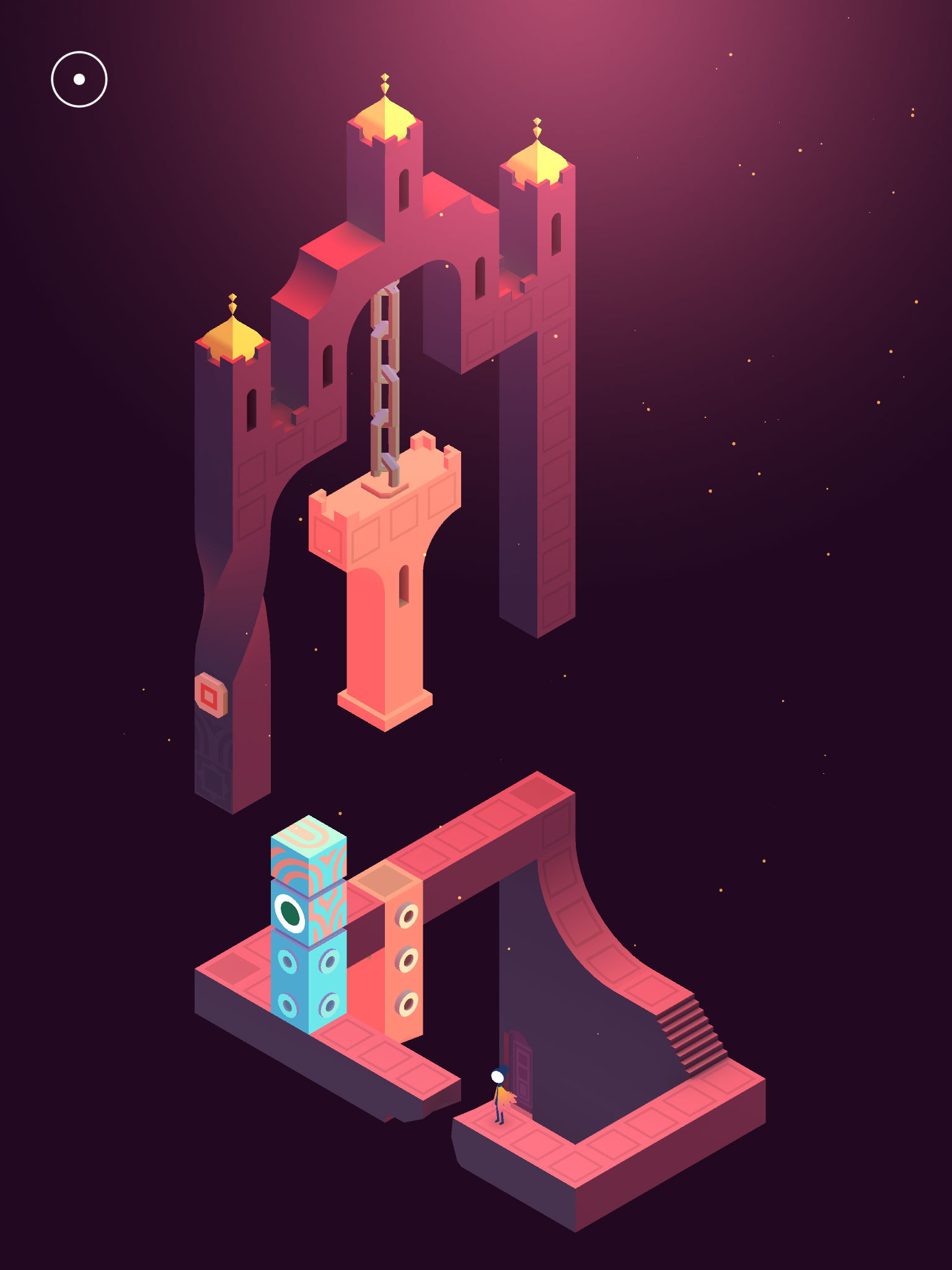 Players of the first Monument Valley will recognize the Totem thanks to its blinking eye and overall helpful disposition (as much as a character with no dialogue can have a disposition, that is). The Totem returns to Monument Valley 2 to help Ro, and some levels cannot be passed without its assistance.

What can the Totem do? It depends on the chapter, but expect the following:

The most crucial thing to keep in mind with respect to the Totem is that if you see it in a level, it’s there for a reason — sometimes multiple reasons. Expect to need its help to solve the puzzle in front of you.

These should be enough tips to be well on your way to exploring the entirety of Monument Valley 2. Did we miss any basic information that might be helpful to newcomers? Please let us know in the comments section below and we’ll work together to make sure beginners have the best possible experience.