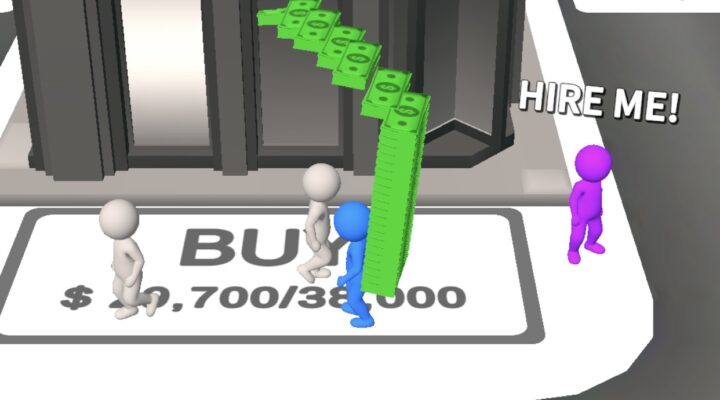 Moneyland is a game about picking up cast wads of cash and spending it to open new businesses and areas. There’s a lot of running around involved, but that doesn’t mean the game is easy. In fact, there are some challenges here you might need some help to overcome.

And that’s where this guide comes in. We’ve played a good chunk of Moneyland and discovered a series of strategies that are going to take your capitalist empire to the next level. Follow these and you’re going to be absolutely rolling in it.

It doesn’t matter whether you’ve just picked up your first bundle of cash or you’ve already opened a bank, there’s going to be something here to help you out. These are the best hints, tips and cheats for Moneyland.

Whenever you get the chance to hire a new worker you should take it, whether that means spending some cash or watching a video. Workers will pick up and drop off money on their own, which is going to move everything along much quicker.

Upgrade as you go and you’re going to put yourself in the best position to earn. The more you can pick up, and the faster you can do it, the more you’re going to be able to spend. District earning rates don’t stack, so you’ll need to unlock them again at the new upgrade points.

Stand in the green

You don’t have to run around to pick up the money. Stop in the green-edged box outside your businesses and all the money you can carry will come flying straight towards you. If you move around, it usually takes longer to grab it all. So stop, wait and grab a fat stack.

Often you’ll spot boosts on the floor. These can increase your carrying capacity or double your money for a short time. There’s even a scooter that you can ride around. Use them when they’re free, but when you need to watch videos for them it’s not really worth the extra time.

When you open a new district there are different sized businesses for you to open up. Do the big ones first and you’ll start getting a decent stream of cash coming in close by. Then you can use that money to open the rest of the smaller businesses.