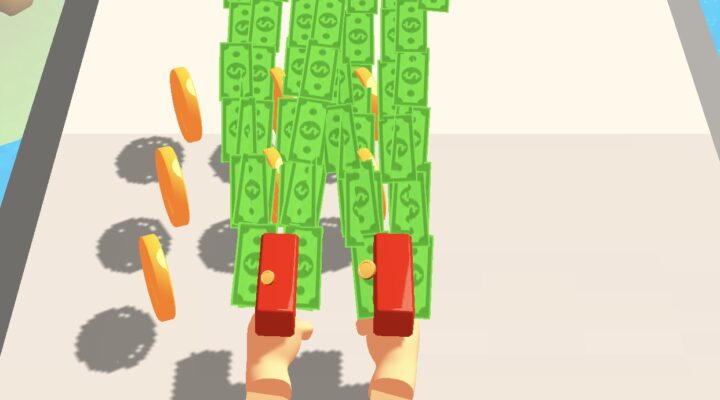 And because we don’t want you becoming befuddled or bemused, we thought it was a good idea to write up this guide. It’s made up of all the strategies we’ve discovered while playing Moneygun Run, and we’re only too happy to share them with you. With these suggestions you’re going to be earning more cash than you know what to do with.

It doesn’t matter if you’re lining up your first shot or you’ve already blasted a world to bits to unlock a new level – there’s going to be something here to take your skills up a notch. So, without further ado, here are the best hints, tips and cheats for Moneygun Run. Hitting something will almost certainly end your run. If you’re not sure whether you’re going to have shot an object enough times to collect it before you ram into it, it’s better to dodge out of the way than risk having to start the level all over again.

You should always go through the green gates and avoid the red ones. The choice isn’t quite as simple as that, because the green gates offer different sized boosts to your skills, but if you have to pick between red and green, always go green. Think about what you’ve already boosted and try to mix up your selections. When you’re upgrading at the start of the level, you should try and spend your coins evenly between the cash value of the notes you’re firing and the rate at which you fire them. Then, if you’ve got some spare cash, spend it on the hourly earning rate. The first two will help you in the next level, the last one will help you when you put the game down.

Firing at the slot machines gets you boosts, but it can also get you de-buffs. If you hit one and you get something green it’s probably best to stop firing at it and be happy with your lot. If you get a red, keep firing to try and balance out the bad. You can pass through them so don’t worry about taking damage if you hit them. Once you’ve flicked your coin pile at the end of a level, the game gives you the option to watch a video to increase your haul. While it’s nice to have a lot of coins, there’s enough videos in the game without adding more. And you should do just fine without having to rely on the extra coins.