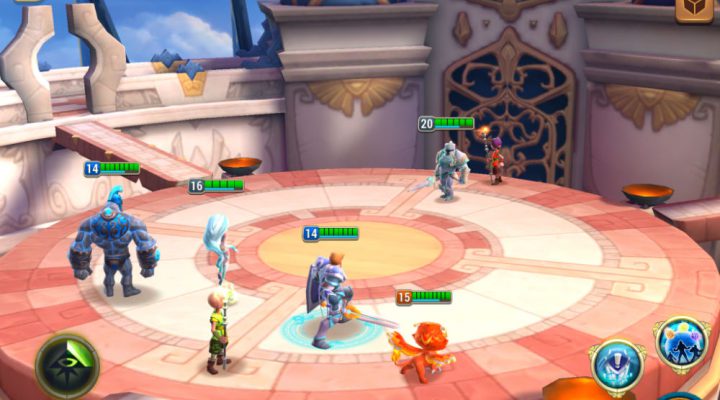 It’s not hard to find a turn-based strategy RPG for your phone or tablet these days — the app stores are chock-full of them. Most are in a fantasy setting, too, meaning it can be hard to tell them apart.

You won’t have any trouble distinguishing Might & Magic: Elemental Guardians, though. Not only is it from a huge franchise and published by Ubisoft, but it boasts a few cool tricks that make it stand out, not least the ability to see your characters battle in augmented reality (AR).

To answer the most obvious question: yes, Elemental Guardians is a bona fide Might & Magic game, taking place in Ashan roughly 100 years before the events of Might & Magic Heroes VI. If you’re up on your series lore, you’ll no doubt be drawn in by that alone.

If not, no worries. We’re here to help you get your bearings in Ashan, guiding you through everything you need to know to get started and set your own character loose in AR. 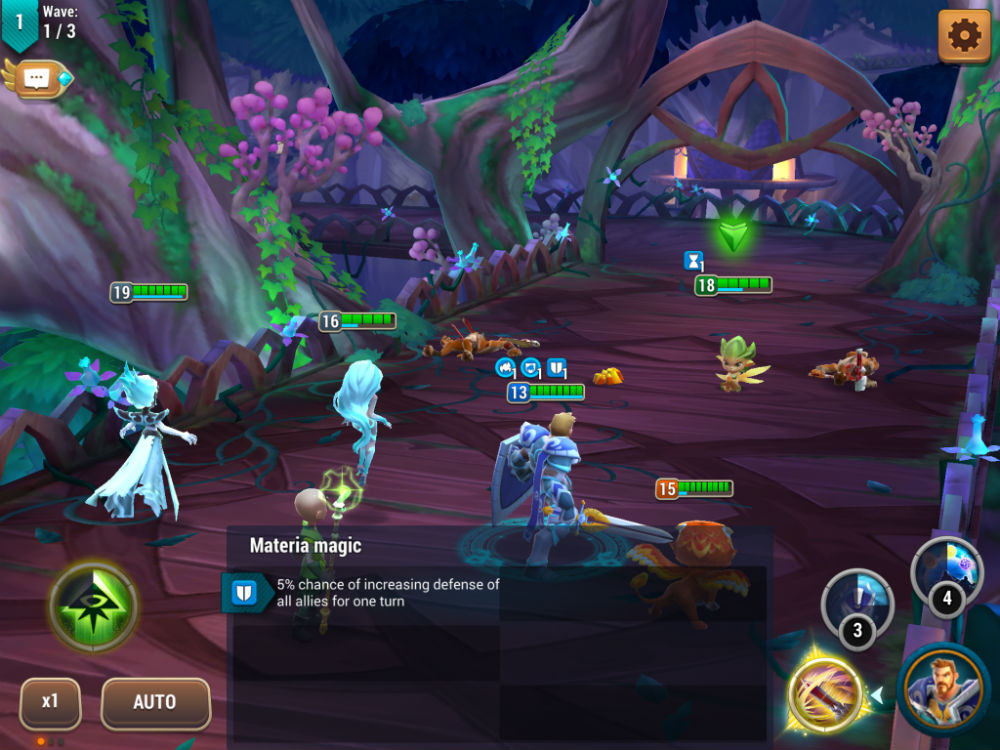 Chances are, you’ve played a strategy RPG like Elemental Guardians before. Regardless of the game mode, you’re in command of a team of four characters, and you need to help them prevail in turn-based battles against both waves of enemies and evenly matched teams in the Arena.

Each character has a status bar above their head indicating their health in green. Beneath that there’s a blue bar that fills up at varying speeds. When the blue bar is full, that character can act. Using the array of skill buttons in the bottom-right corner of the screen, you can tap and hold on any skill to see what it does, and then simply tap on it followed by a target to deploy that skill. 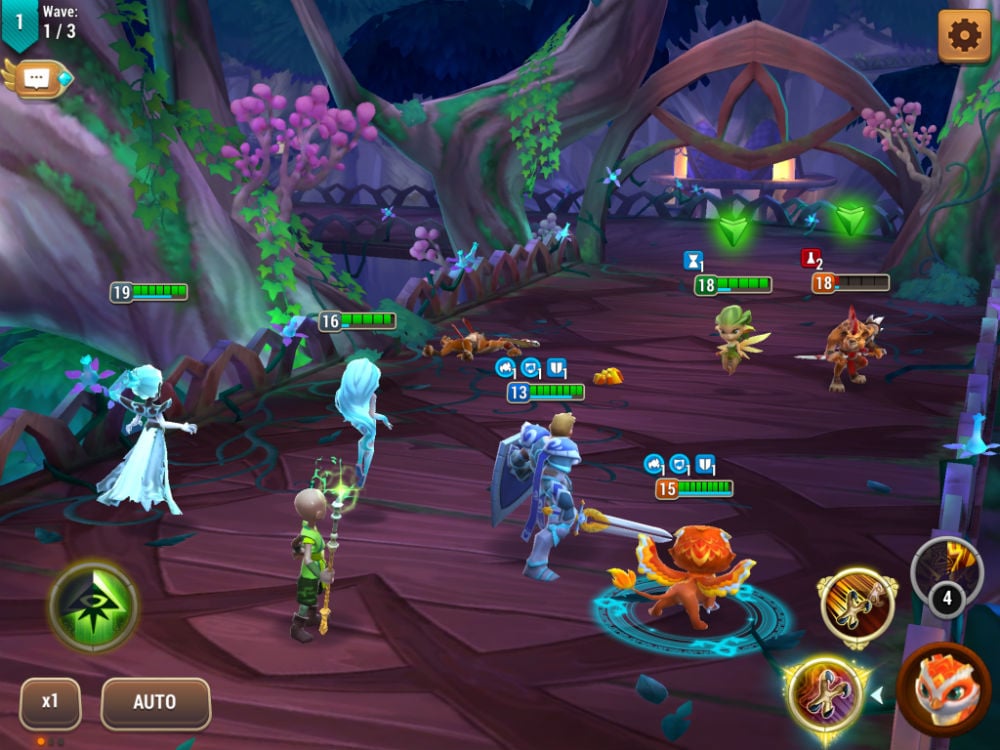 Your character’s basic attack is unlimited, but its remaining skills all have cool downs periods. The skill icons gradually fill with colour to indicate their recharging progress, but you can also tap and hold to see exactly how many turns remain before the skill is usable again.

The colour of the arrow above a potential target’s head indicates whether you have an elemental advantage. Green means extra damage, yellow is normal, and red means you’ll do less damage. Any status effects are shown above a character’s health bar, with buffs (beneficial effects) in blue and debuffs (negative effects) in red.

Last but not least, your avatar can assist when their magic is full enough — just look at the circular gauge on the left. When it’s full, you can unleash the magic by tapping on it, secure in the knowledge that you haven’t used up one of your characters’ turns. 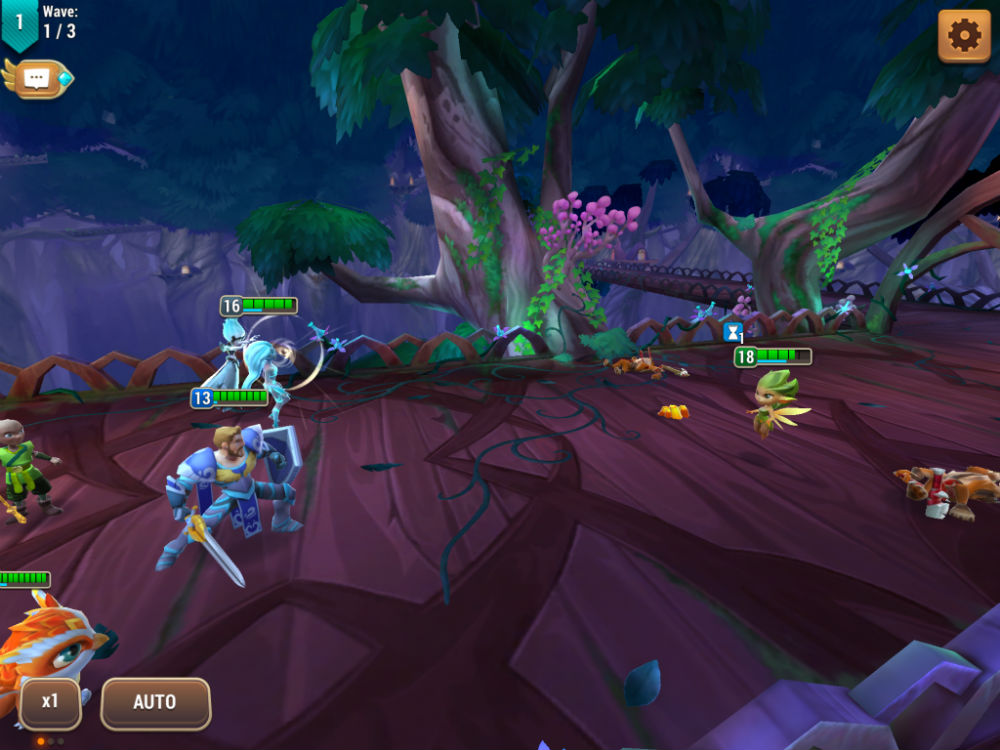 Once you’ve gotten the hang of the very basics, here are some more combat tips that will help you when the challenge level gets a little tougher:

How to create a great team 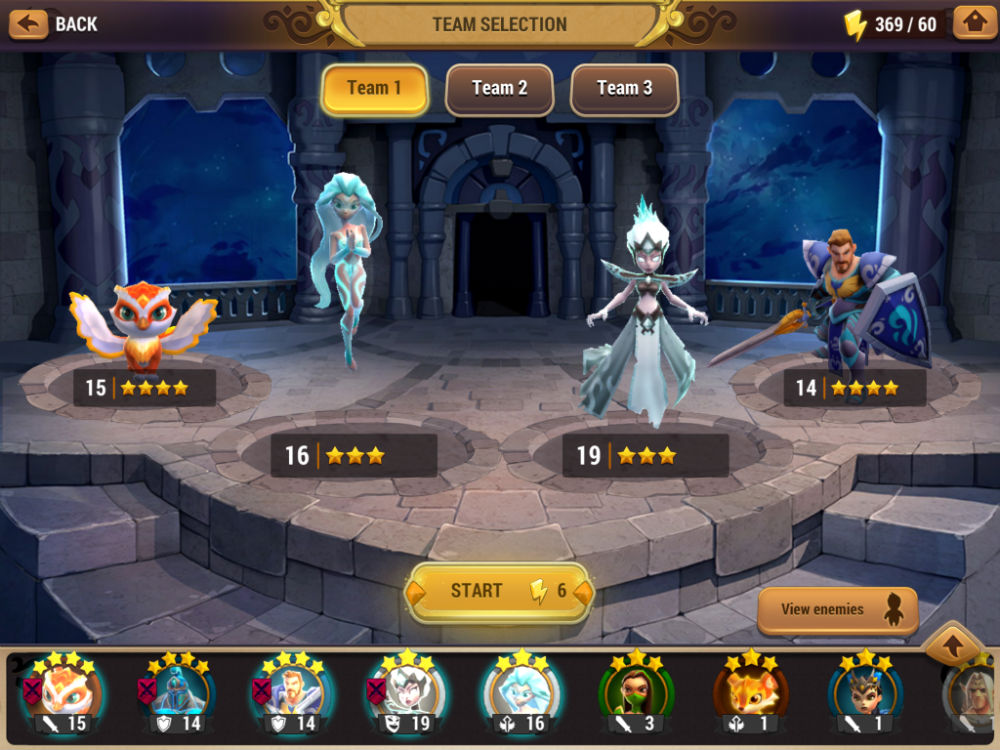 When you’re just starting out in Might & Magic: Elemental Guardians, you won’t have many potential recruits beyond the Young Griffin you start with and whatever other characters you might come across. That will change the more you play, as there are dozens of creatures to collect, level up, and evolve.

Along with their rank and level, the simplest indicators of their relative power, each creature has two characteristics that help define how useful they might be on your team: 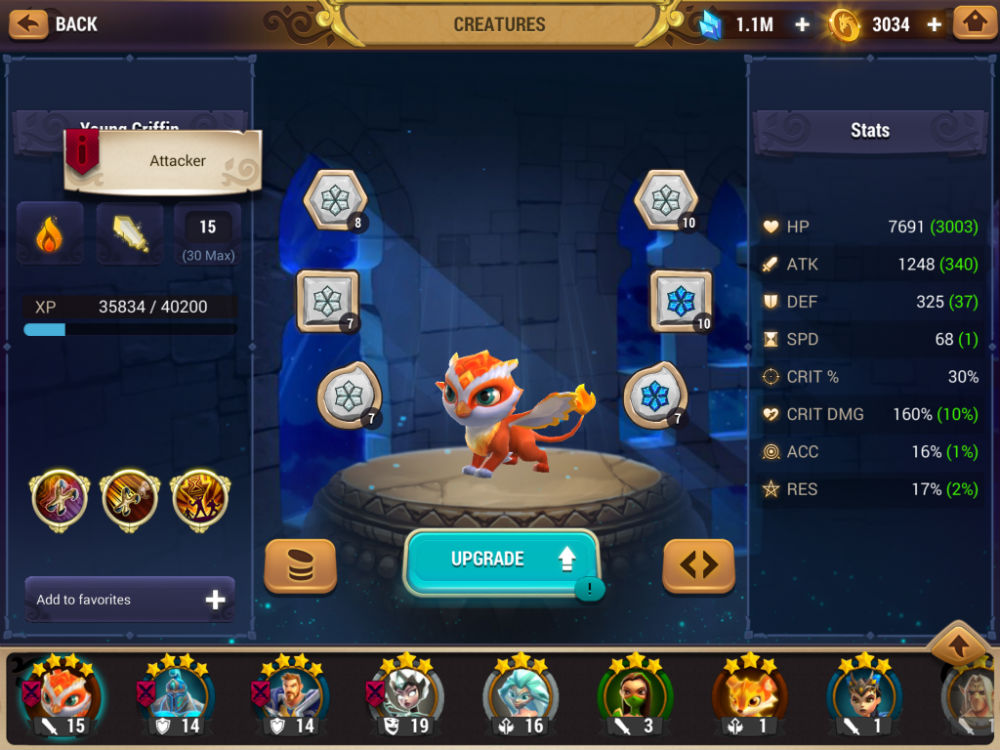 Ideally, you want a mix of elements and roles on your team to help deal with whatever is thrown at you.

If you find a character particularly useful, there are numerous ways to improve them even more, including levelling them up to increase their base stats, assigning Glyphs to them to boost specific attributes, increasing their rank when they achieve max level, and evolving them into new, more powerful forms. 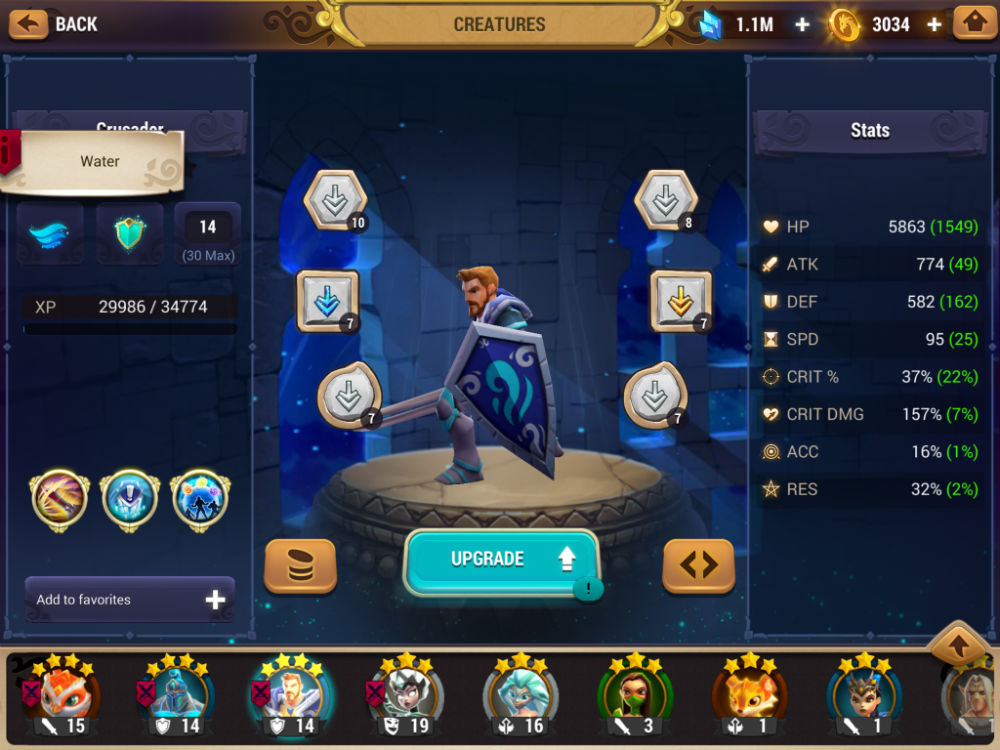 Once you start gathering more creatures on your roster, here are some helpful hints to decide which ones to prioritise:

How to play in AR 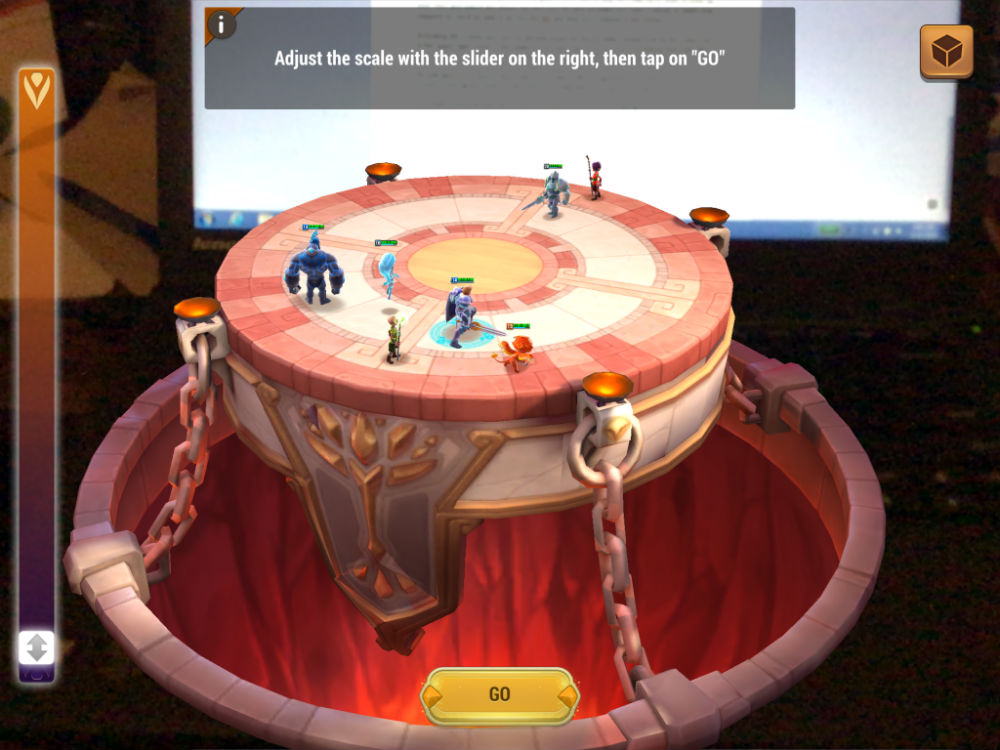 Currently the Arena mode, where you battle against teams put together by other players, utilizes the game’s AR feature in the most interesting way (there’s also the Creature Menagerie mode).

You’ll have to play for a little while in order to level up your Hero and unlock the Arena, but once you do (and provided you have a phone or tablet that supports it), you’ll be able to access the AR whenever you compete in the Arena.

Activating AR is done once you’ve already begun an Arena battle. Simply look for the cube icon in the upper-right corner of the battle screen and then tap on it. You’ll see something that looks like this: 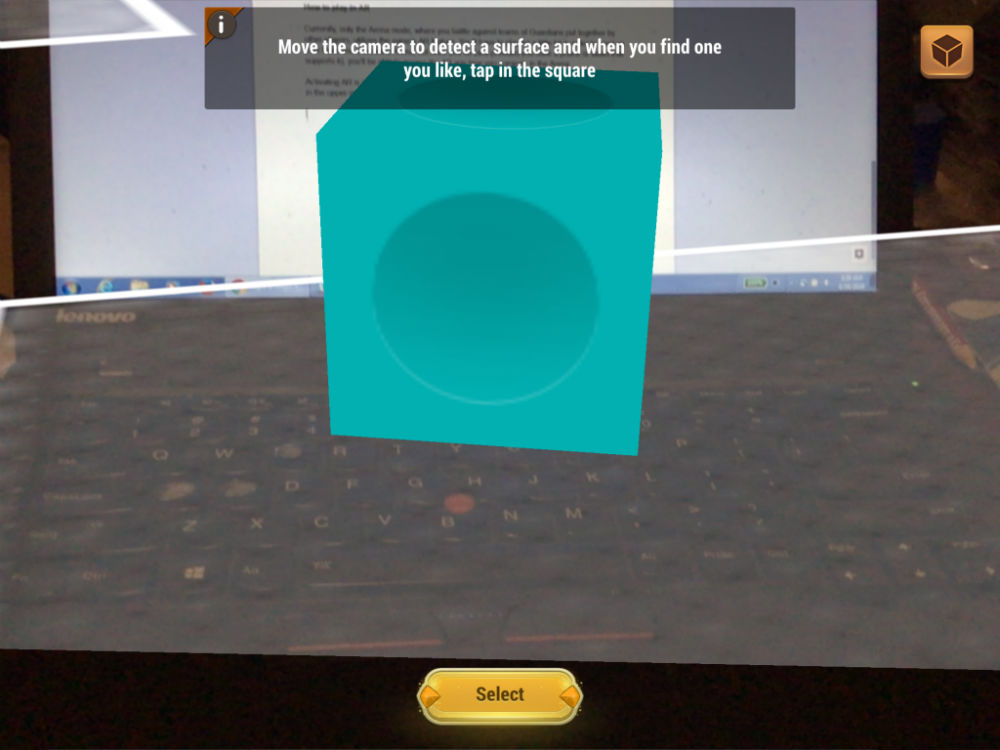 You’ll need to find a flat surface with sufficient lighting before a cube appears on the screen. Then you just have to tap the Select button and your battle will be brought to life before your very eyes.

The slider on the left side can be used to re-size the Arena to your liking. Tapping the Go button will launch the battle as usual, except now it will play out in AR.

During an AR battle, you can move your device around to view the action from different angles — even behind the opposing team if you so desire. You can even tilt it down to check out the lava-filled inferno that waits below. 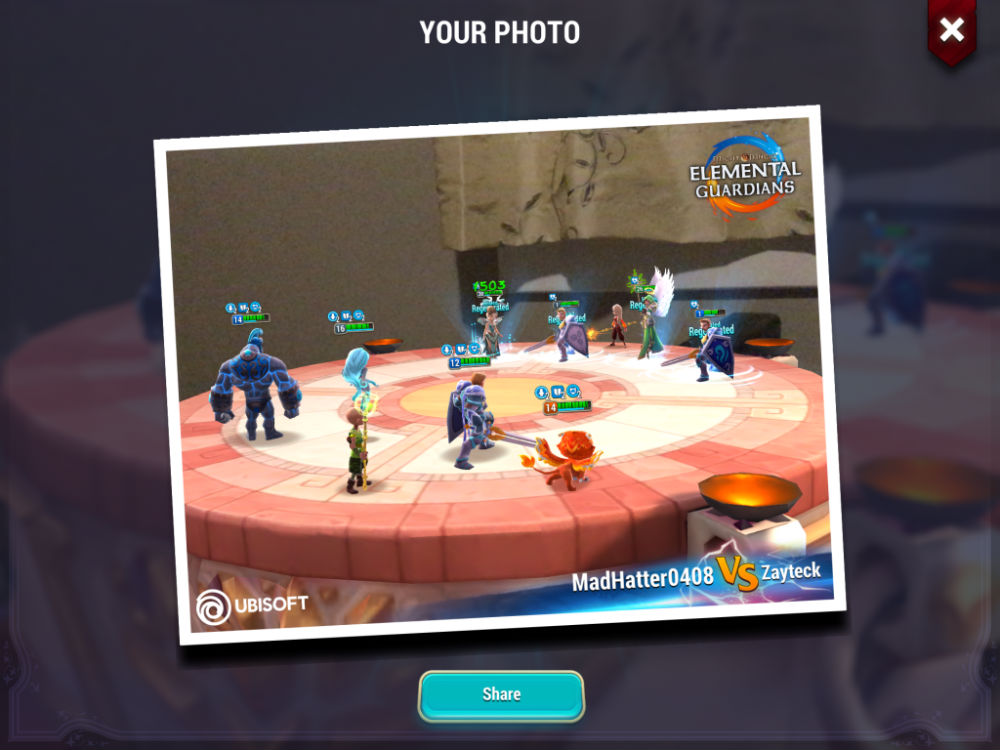 Be careful, though, as moving the camera around too much can throw the whole thing out of whack and make it difficult to get the fight back to where you originally set it down.

While AR doesn’t affect the actual gameplay, it’s a cool feature of Might & Magic: Elemental Guardians. If your phone or tablet can handle it, you’ll definitely want to see how the AR brings a whole new dimension (pun slightly intended) to your PvP play.

Try out Might & Magic: Elemental Guardians for yourself on the App Store and Google Play now.

Westworld: How to get free coins, Gems

How to get more hosts in Westworld