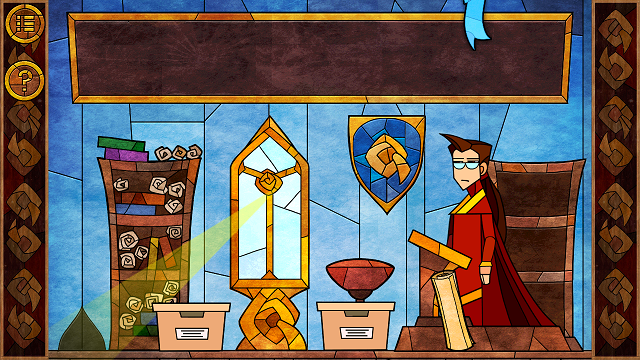 Message Quest is a simple, straightforward little point and click story with little complication. You mostly just tap and drag items around and solve a handful of puzzles. You should be able to complete it in a few hours without trouble. But if you get stuck, here’s a quick walkthrough of all puzzles in the game to ensure you can solve them and save the world of Message Quest: 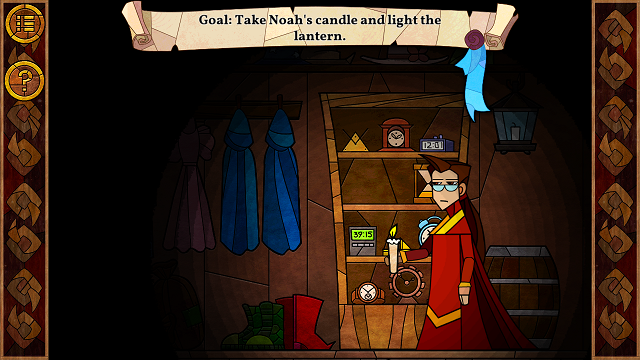 Drag the candle to the lantern in the top right corner. Tap Feste (the kid in the corner) until he wakes up. Tap him and slide right to drag him to the door until he agrees to go willingly. 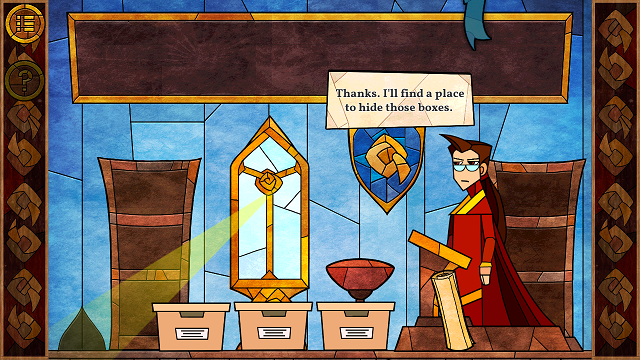 Tap the window to see that it’s dusty, then wipe it to clean it (it’s not obvious that it’s working, just keep doing it). Tap the spider to scare Feste into the chair. Finally, tap both shelves on the sides and the top shelf to pack away the documents. 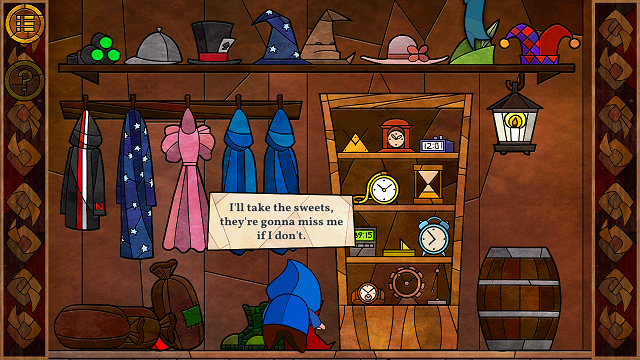 Tap the coats to shake the dust until a sandwich falls out. Tap the boots to get candy, then move the bags to the side to reveal an apple. You’re all set, but you still need to check the hat shelf and clock shelf to continue. 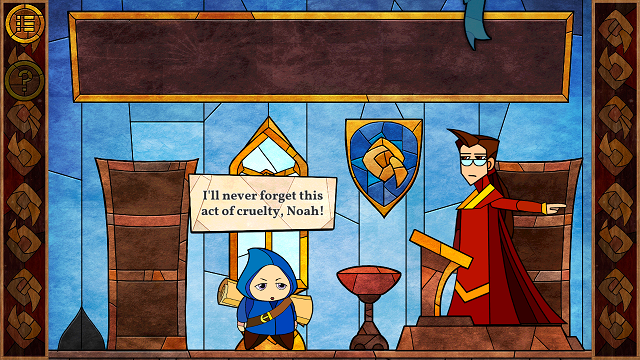 Drag the scroll to Feste, then drag him to the right and out. 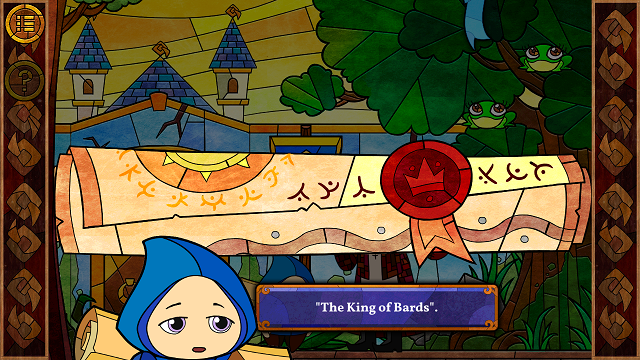 Assemble the puzzle (it’s not hard). Tap on the door, then the frog, then repeatedly tap the sleeping man to wake him. Show him the scroll, then tap the pieces to rotate them so they line up (use the seal on the far right as a guide). 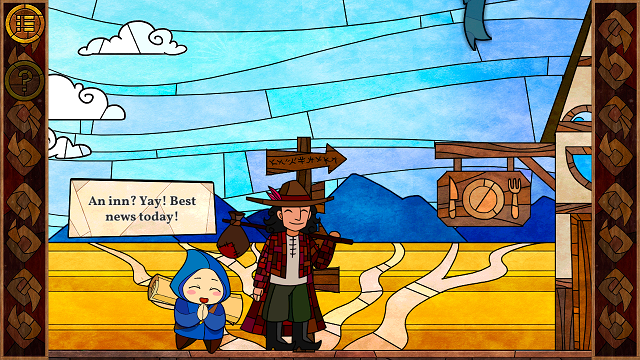 Tap the four road pieces in the order they go in (if you mess up, you have to finish a sequence and “fail” then restart). Do the same thing a second time, though you won’t use all the pieces. Drag Feste to the right. 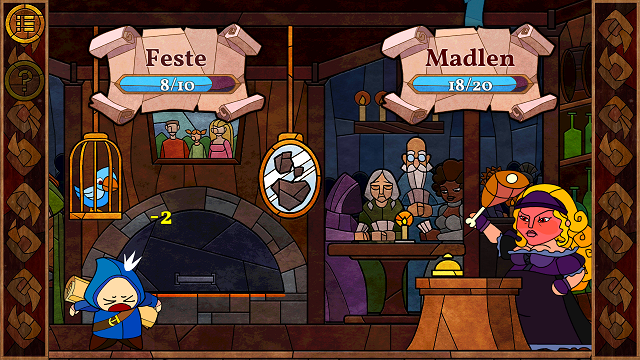 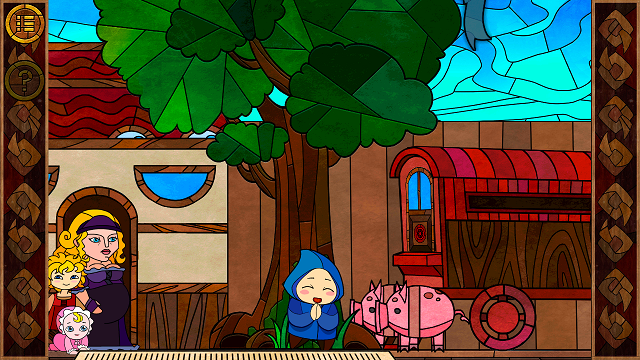 Outside, wait until the conversation is over, then drag the wheel from behind the tree under the wagon. Drag the door from the inn onto the opening on back of the wagon. Place the two pigs outside of the door. Tap the fence when prompted, then tap the scroll and rotate pieces to reassemble it. 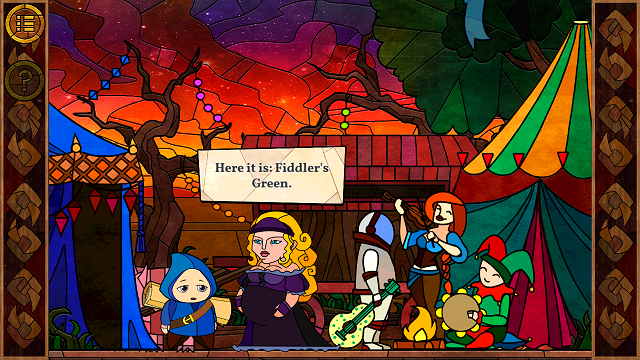 Assemble the road segments just like before. Once in Fiddler’s Green, pull the blue cord on the left then drag the fiddle to Feste. Match the music notes in order to play. Then beat the fight the same way you did earlier. 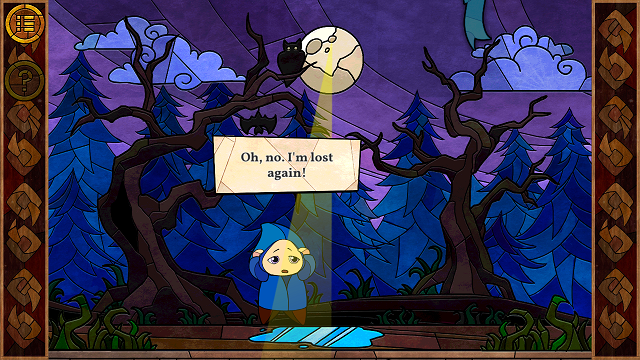 Move the clouds away from the moon. Tap Feste until he creates a big enough puddle and calms down. Solve the puzzles. Defeat Laziness. This may take a bit longer, as you’ll need to focus on increasing your healing and damage to make a dent in him. 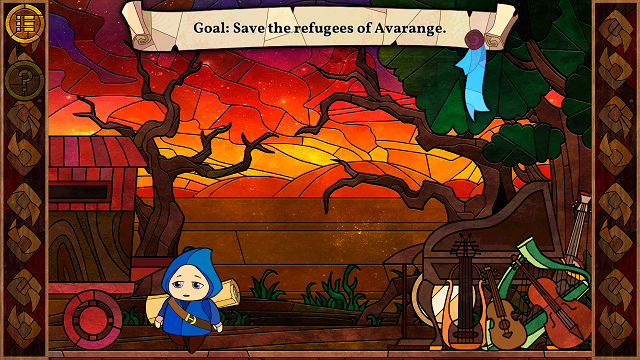 Tap the children and drag them into the wagon. Tap the instruments and move them to open a path to move the scroll out the right. 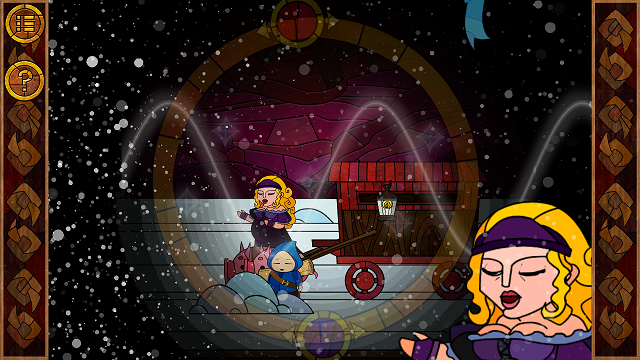 Solve the rift puzzle. Adjust the sliders to get the sound waves to pass through the five stars. Red needs to be near the top and blue near the bottom–the puzzle will start shaking when you’re close. Tap the children. Drag the scroll to bridge the gap, then drag each child across the scroll. Tap the last one to save her. Tap the snow around the pigs to clear it. 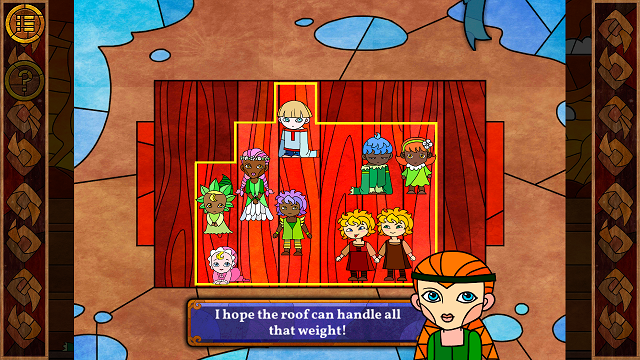 Tap Feste until he gets up, then tap the wagon to arrange the children in it. Use the image above for a guide, as this can be quite tricky. Tap the trunk for another puzzle, this time much easier. The middle dial is fixed and you want the symbols that touch to match. Start with the dial to the right and move clockwise, tapping to rotate dials until all symbols glow. Drag the blankets to the girl that appears, then drag the bucket down. Finally, talk to Lyn-Ryne. 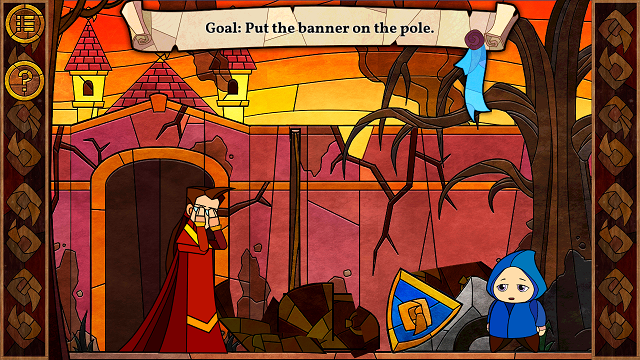 Talk to Noah, then move the rocks away from the banner peeking out on the ground. Tap it to clean it, then drag it to the pole. 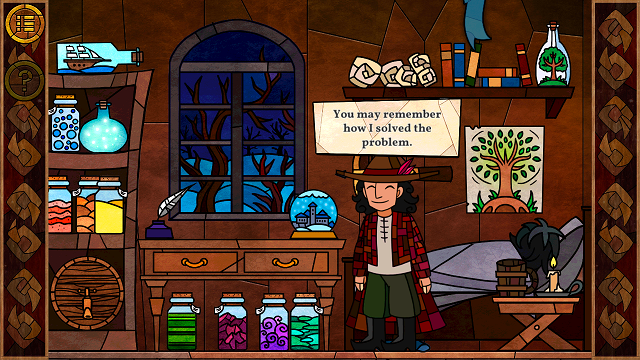 Finally, the epilogue. Take the cup and drag it to the keg, then to the nightstand. Tap the scrolls on top of the screen, then drag them down to the table. Then, drag the candle from the nightstand over, followed by the tree in a bottle. Tap the snowglobe. Tap bottles until you’re told the right one, then drag it to the table, too. Finally, drag the bottle of ink to the center of the table, and that’s the game! Hope you enjoyed Message Quest!