Marvel Strike Force Stark Tech Guide: How to Improve Your Characters Even More 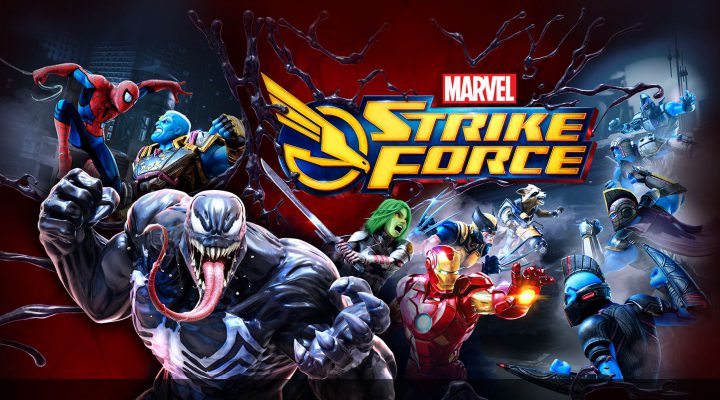 It only makes sense that the heroes and villains of Marvel Strike Force would turn to Tony Stark to make them even more formidable. Marvel’s foremost self-made superhero isn’t just hogging his best stuff for himself as Iron Man, he’s now unleashed the power of Stark Tech to help you improve characters throughout your roster.

Stark Tech was added to Marvel Strike Force in its most recent major content update as part of the changes to Alliances. As such, it’s possible you might not even have noticed it. While it’s not going to dramatically change the way you play, this is a game where every little edge counts, so you’ll want to know how to use it to your advantage.

With that in mind, we put together this Stark Tech guide to better explain how it works and how you can contribute to your Alliance to activate even more of it.

Stark Tech gives bonuses to the base stats for all characters (heroes or villains) who share a common origin: Tech, Bio, Mystic, Skill or Mutant. These bonuses can be purchased individually for each stat — Health, Damage, Armor, Focus and Resistance — at 1 percent per level up to a maximum of 20 levels.

All Marvel Strike Force characters need to be at level 20 or above to take advantage of any Stark Tech bonuses. As well, though anyone in any Alliance can use Stark Tech at level 1 of its bonuses, your Alliance will need to be at increasingly higher levels to benefit from further boosts.

How to Activate Stark Tech Bonuses

You’ll find the Stark Tech menu within your main alliance screen. First, tap the ‘Alliance Donation’ button, then tap on the ‘Stark Tech’ button on the next screen.

Here you’ll find tabs for the five origins across the top of the screen, as well as buttons where you can purchase Stark Tech bonuses using Alliance Credits, for which your current balance can be found at the very top, next to the home icon. Any bonus you can afford to purchase will be displayed in white, while those for which you need more Alliance Credits will be shown in red. 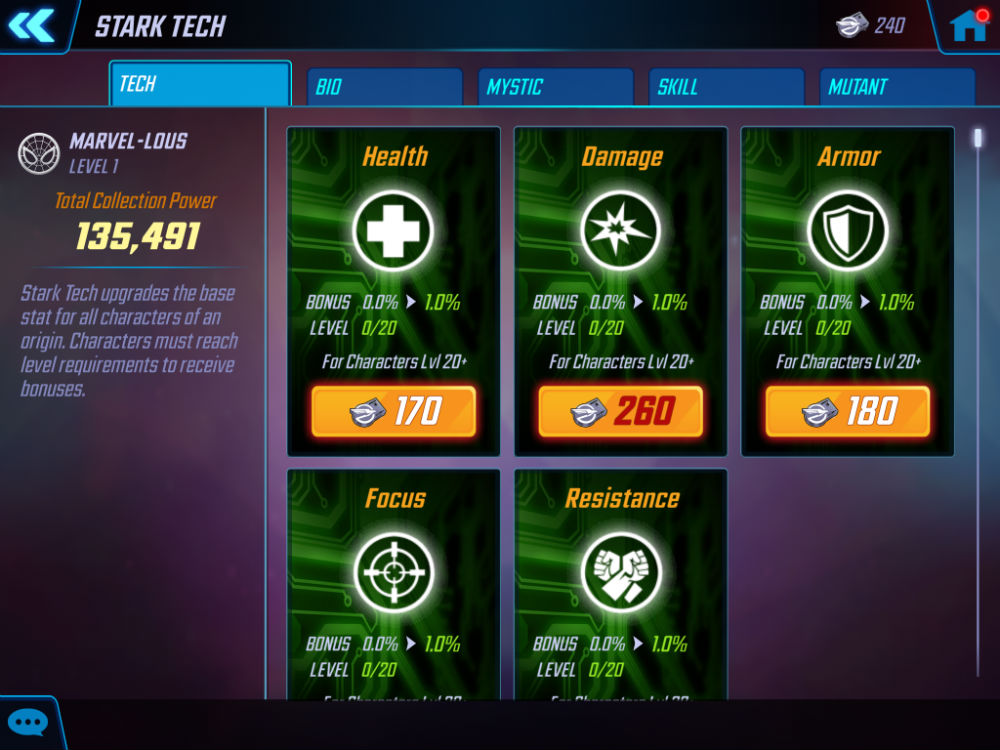 The obvious follow-up question, then, is how to get more Alliance Credits. You can get more by making a donation to your Alliance once a day, something that also bumps up the Alliance XP and gets it closer to leveling up, so you’re knocking out two birds with one stone on every donation. You have the option of donating either 10,000 credits or certain amounts of Power Cores, and making more significant donations rewards you with more Alliance Credits. You’ll also acquire Alliance Credits every time your Alliance passes one of the milestones indicated at the top of the Alliance Donation screen, and from the corresponding Daily Objective that ties in with donations. 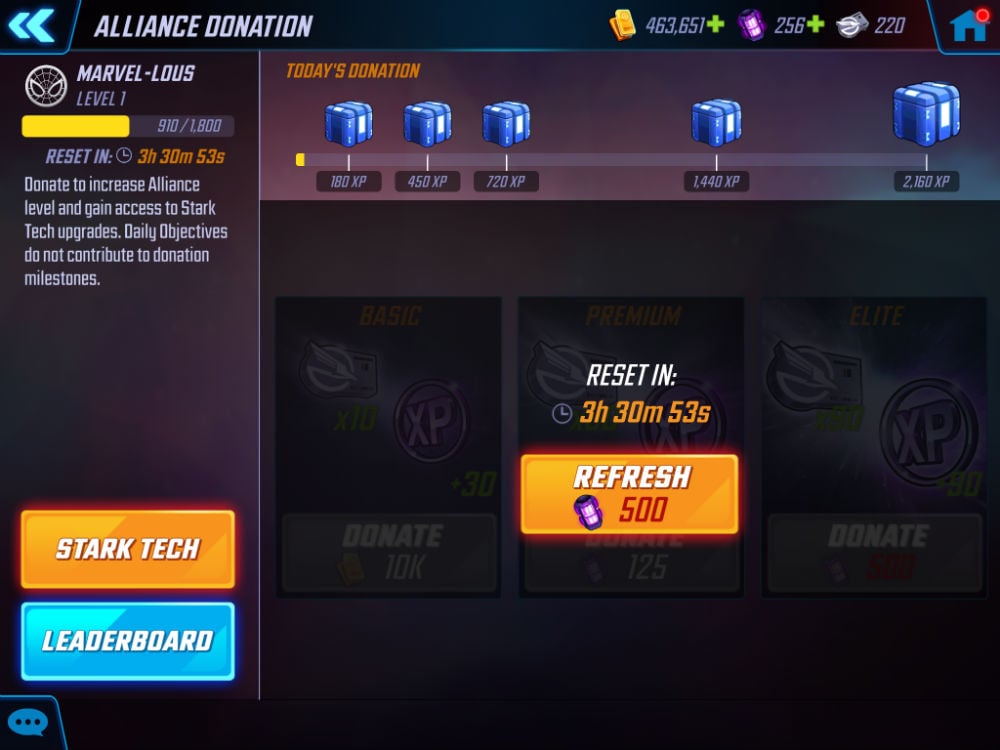 How should you spend your Alliance Credits on Stark Tech? That’s really up to you, with the obvious hint that if you have a main team for several game modes that includes several heroes who share the same origin, that’s a good place to start. MMORPG also offers a great hint about prioritizing Health: Because the bonuses are percentage-based and Health is the biggest number on leveled up characters, you’ll get the most bang for your buck there, so to speak.

Now that you’re up to speed on Stark Tech and how it can help you, please check out our other Marvel Strike Force guides, including how to put together a great team and our introduction to tier lists.