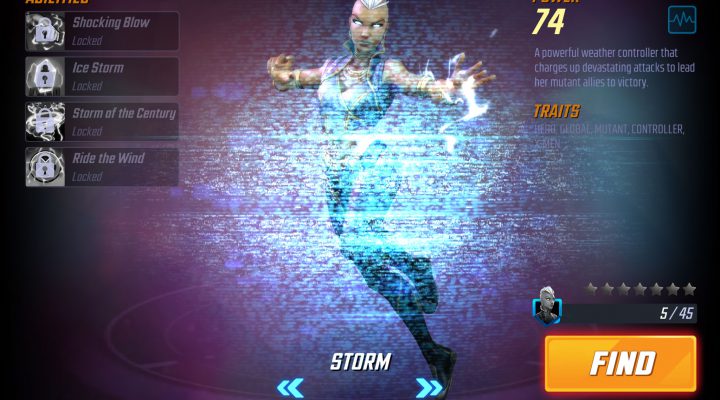 Marvel Strike Force has always been heavy on characters you could find in the Marvel Cinematic Universe movies and TV shows with a few others mixed in. Even among the mutants the game has featured, Deadpool and Cable just appeared in a movie this year (albeit not a Marvel movie), so Wolverine was really the lone X-Men representative just for the sake of having him in the game. He’s got company now, though, as Storm has also recently joined the battle against Ultimus.

Befitting her status as a literal weather goddess for part of her life, Storm is a Controller whose abilities play off the Charged mechanic — again, very appropriate given the nature of her mutant powers. Her basic attack can affect multiple targets when Charged, and also stacks that condition in and of itself. Ice Storm has a chance to Slow all enemies and Stun them if Charged, and Storm of the Century becomes a massively powerful multi-target attack if she has time to build up more Charged stacks. Ride the Wind can speed up and assist X-Men and X-Force allies, though it will only truly come into its own once there is at least one more mutant hero in the game.

All told, Storm has the potential to be a very promising new character, one worth experimenting with if you’ve at least got Wolverine and Deadpool pretty powered up. The good news is that Storm can be yours right now, and she’s actually somewhat easier to unlock than other recent new characters.

Eye of the Storm Event Details 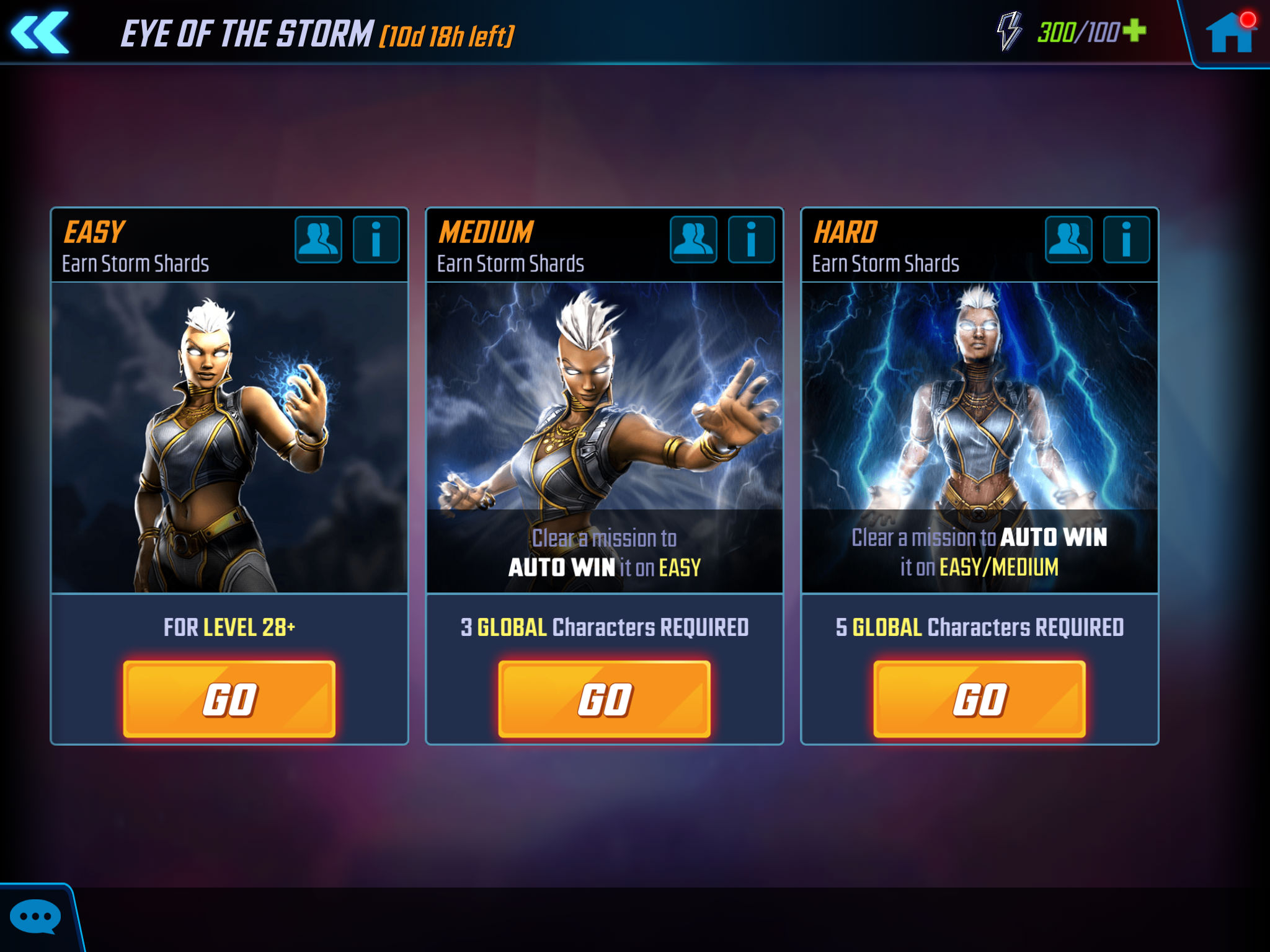 Like most new characters in Marvel Strike Force, Storm has her own event chain called Eye of the Storm, which runs through Sept. 22. it has Easy, Medium and Hard difficulties, and if you clear a mission on Medium or Hard, you can use Auto Win to quickly sim runs through that same mission on the easier difficulties.

The prerequisites for each difficulty are as follows:

Bonus tip: The first mission is one for which you are provided Storm at an appropriate power level, so you should definitely play that one on Hard so that you can Auto Win the first mission on the two lower difficulties.

In each Eye of the Storm mission, you have a chance to win Windrider Orb Fragments, with a maximum amount you can obtain from each event node. For every 2,000 Fragments you collect, you can go to the Store and claim one Windrider Orb, which will grant you a minimum of five Storm shards and as many as 25.

Storm requires 45 shards to unlock, so at worst, you’ll need nine Windrider Orbs. In practice, though, it should be less as some Orbs will provide more than the minimum number of shards. Happily, there’s also another way you can speed up the process …

Yep, in something of a change from past character additions, you can actually use Power Cores to simply buy Windrider Orbs directly. They aren’t cheap — at 500 Power Cores each, they’re actually more expensive than Premium Orbs — but there’s no uncertainty involved. You get guaranteed Storm shards every time, so if you’re determined to get her unlocked as soon as possible and you’ve saved up some Power Cores, it’s definitely worth considering.

Storm will no doubt cycle through other methods for obtaining her shards down the road as Marvel Strike Force does with all new characters, but we’ve laid out a path for you to have her on your roster before the month is over. Good luck, and don’t forget to check out our other Marvel Strike Force guides to topics like raids and Blitz mode.