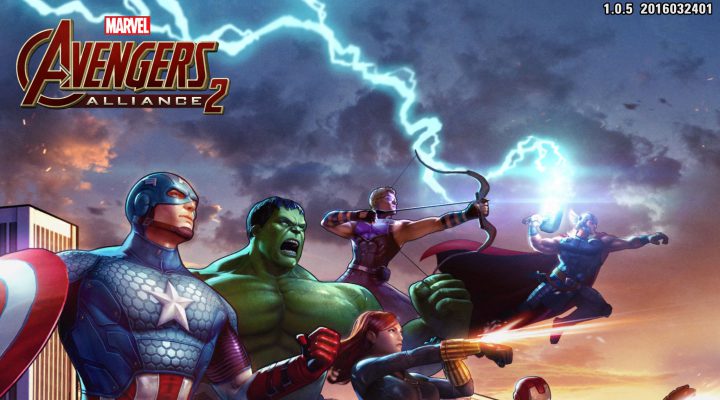 Once upon a time, some of Marvel’s greatest superheroes (and villains) came together to save the world, and maybe even all of existence, on Facebook. In Marvel: Avengers Alliance 2, they’ll have to do it all over again on mobile.

But hey, at least they have you to help them do it! As a SHIELD commander, you got your hands dirty in the first game on the front lines of the battle against evil. You’re sticking behind the scenes where it’s safer in MAA 2, but that doesn’t mean it’s going to be easier, especially since this game has a number of twists on the gameplay formula that worked so well before.

Are you up for the challenge? Once you tale a spin through our Marvel: Avengers Alliance 2 Tips, Cheats and Strategies, chances are you will be. So assemble your best team and let’s go save the world! 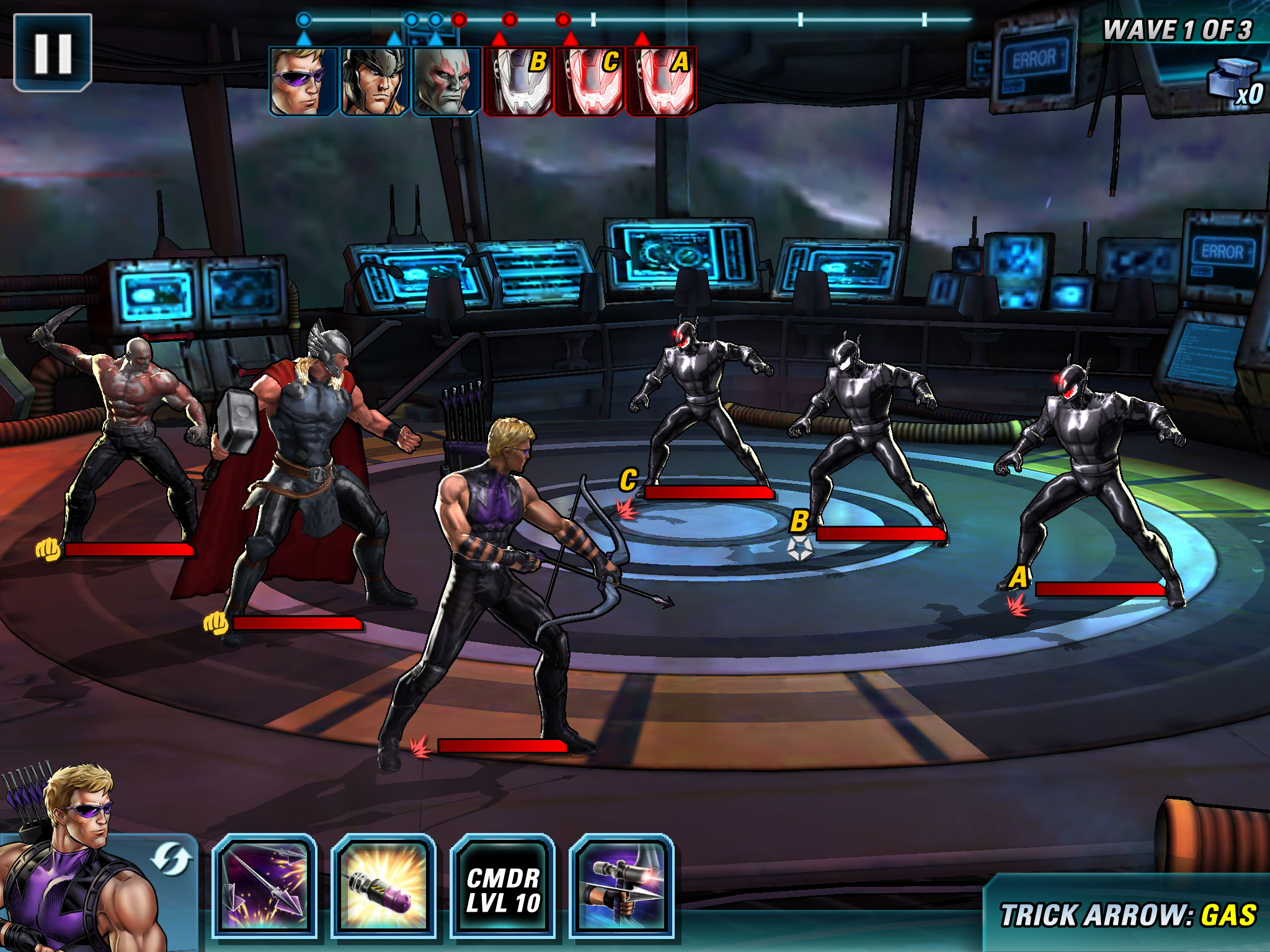 Like its predecessor, Marvel: Avengers Alliance 2 features turn-based, JRPG-style battles in which the characters under your control and the ones you are fighting act in order. You can tell who will act next thanks to the handy timeline at the top of the battle screen.

What impacts the arrangement of actions? Speed, for one thing. Every hero on your roster and every enemy you fight has speed as a core stat. The higher this value, the quicker the character will show up on that timeline, and very fast characters may get to act twice before others ever get to go once.

Each ability also has a speed rating, though they are simply described as fast, normal or slow. Using fast abilities means the hero’s next action will come sooner, while slow abilities will delay the next turn.

BONUS TIP: Some conditions affect the speed of a character’s next action as well. Chief among these is stun, which knocks a target’s next action back to the right of the timeline, delaying the next time he or she will get a turn. That’s extremely useful, but take heed: Stunning gets less effective every time you use it on a specific enemy. 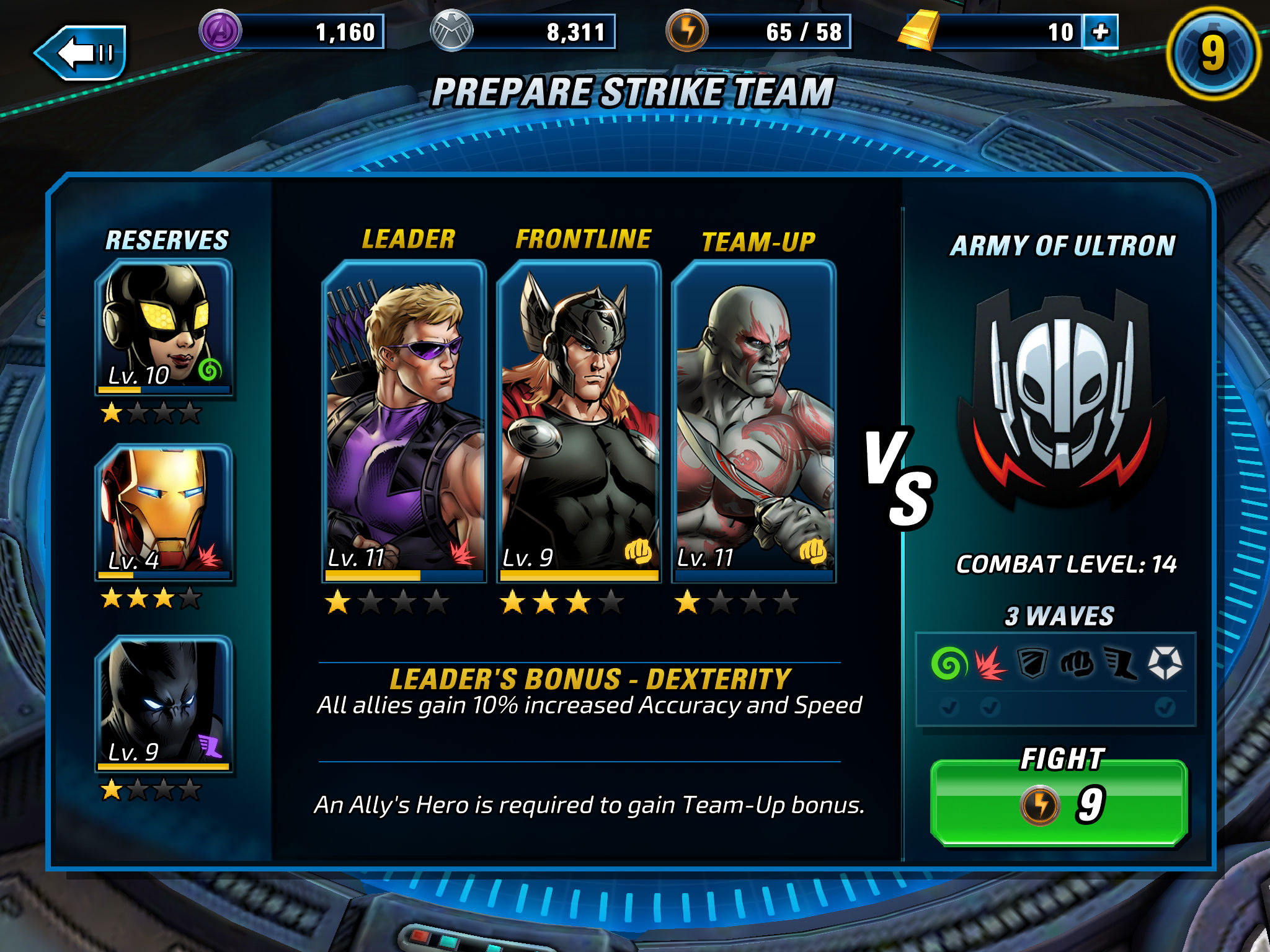 Unlike Iggy Azalea, you do need more than just you on your team. Fortunately, Marvel: Avengers Alliance 2 lets you bring more heroes to the party.

In every battle, you’ll get to pick two heroes and have a third one either assigned to you due to the specific mission you’re on (a team up) or get to borrow a hero from another player. Either way, you won’t have a choice on who that is.

However, MAA 2 also lets you bring three additional heroes you keep on the bench. You can swap one of them into battle at any time by tapping on the portrait of your current hero in the bottom-left corner of the screen when it’s your turn to act. One of those reserves will also enter the fray should a hero on your team fall in battle. 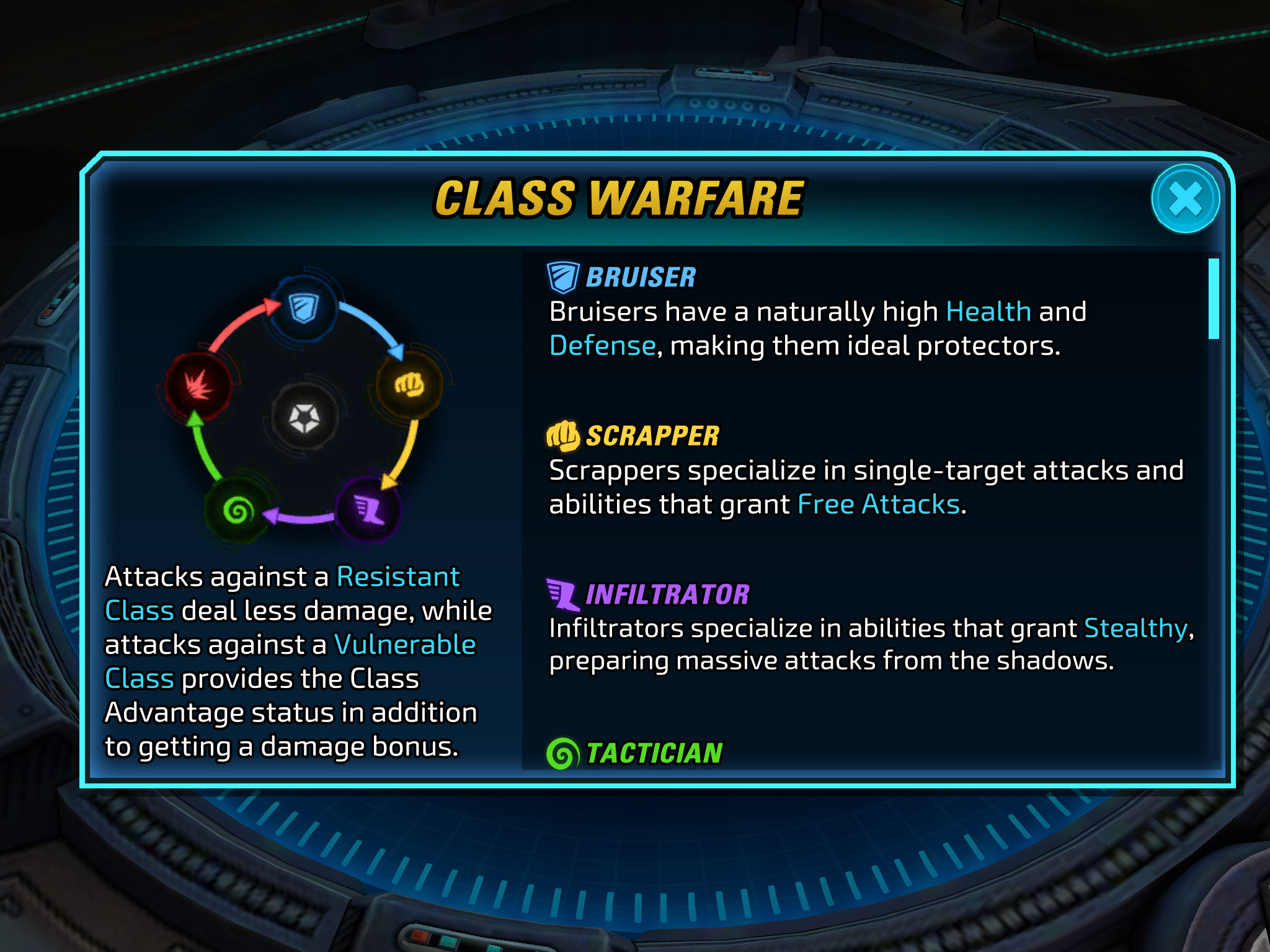 How can you decide the best team to bring into battle? Raw power is obviously a consideration, as is a mix of strong attacks and other abilities like buffs or heals. It’s also important to keep in mind that the game uses a rock-paper-scissors relationship among its five character classes that makes each stronger against one and weaker against another. The relationships work like this:

There’s also a Generalist class that isn’t particularly strong or weak against any of the classes. On the team selection screen, you’ll see the classes of the enemies you’re about to fight, so you can use that info when putting your team together. 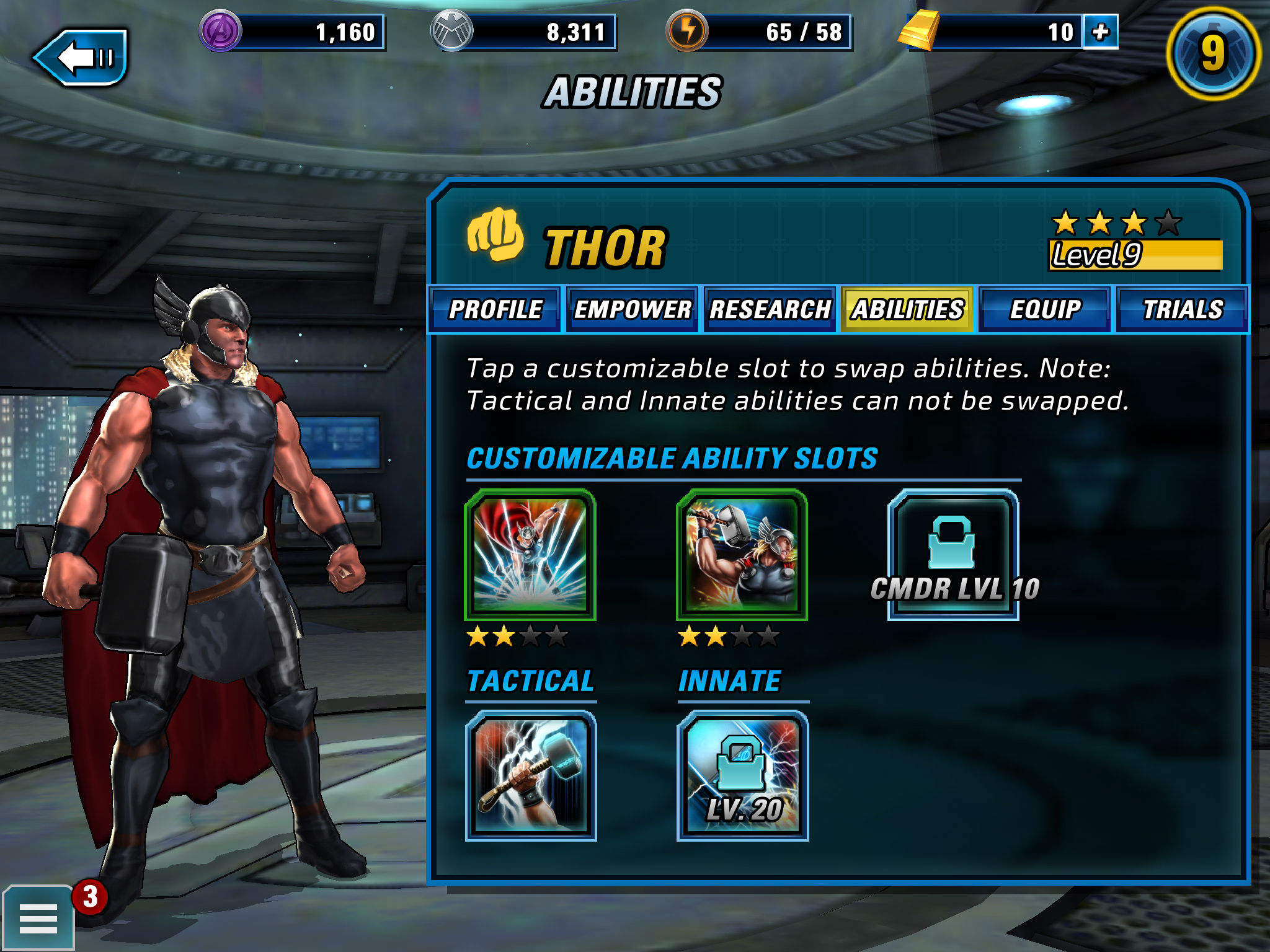 In the first Marvel: Avengers Alliance, a hero’s abilities were set and determined what role they would play in combat. Not so this time around, as each hero has two customizable ability slots, with a third that unlocks once you reach level 10 as a commander. There’s also a Tactical slot with a fixed ability and an Innate slot that unlocks at hero level 20, meaning every hero will eventually bring five abilities into a fight.

The sweet thing about the customizable slots is that once you acquire more abilities, you’ll be able to pick which skills you want to use. Simply tap on the “Abilities” tab in a hero’s profile and tap on one of the customizable slots to bring up a list of the abilities from which you can choose. Holding down on any ability will bring up a complete description of how it works, including its damage rating, how many characters it targets and more.

A complete list of abilities for each hero is beyond the scope of this guide, but suffice it to say that there are many more builds possible for each hero in MAA 2. That gives you a ton of flexibility, but also means that when you run into heroes in PvP, you can’t assume they will attack or defend in specific ways. There’s a lot more to learn and prepare for thanks to the ability swapping feature. 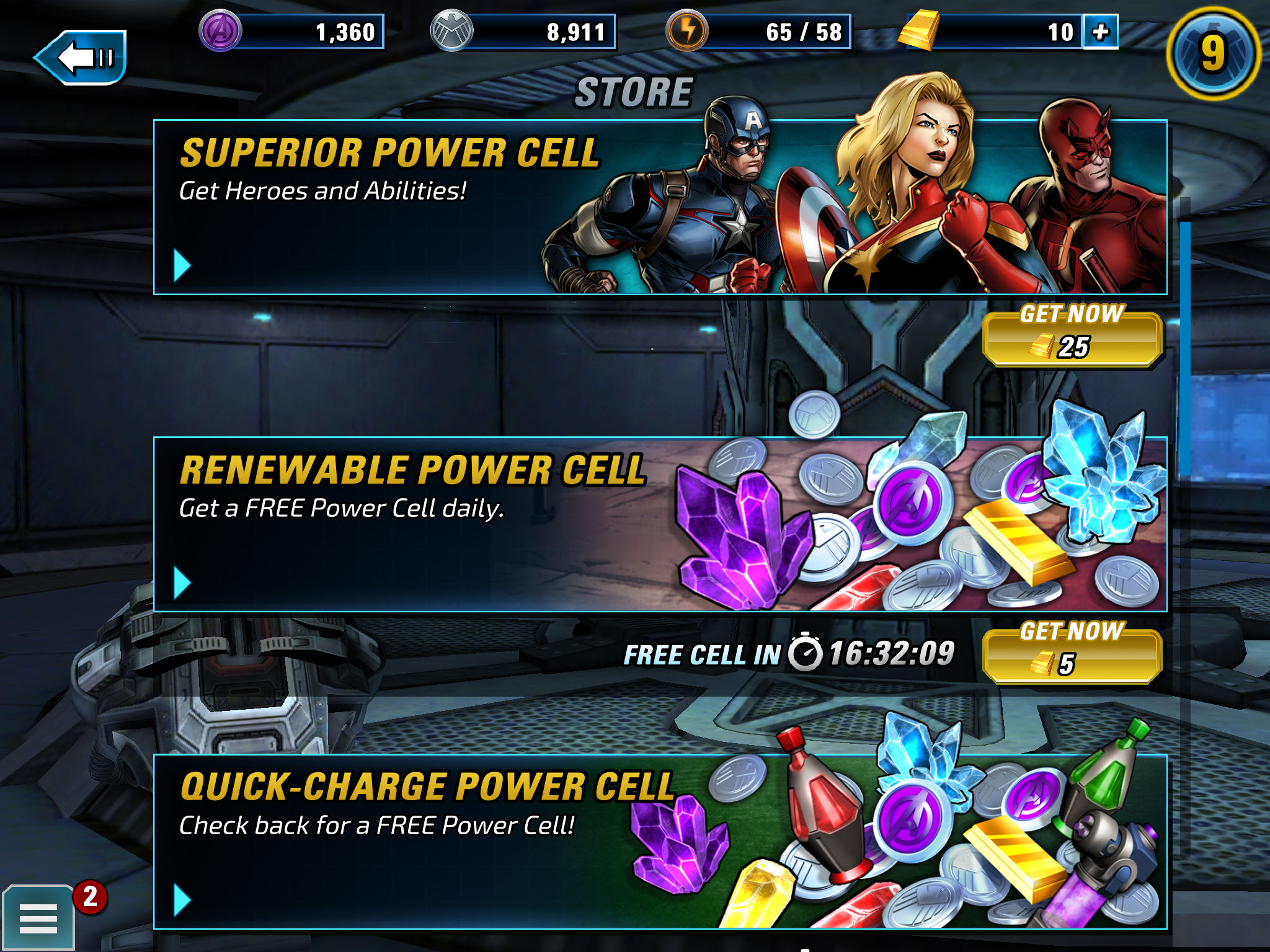 While you can and will still receive heroes as mission rewards in Marvel: Avengers Alliance 2, one of the biggest changes from its predecessor is that you’ll acquire most of them randomly. The game uses an item type called Power Cells to hand out rewards, including in-game currency, heroes and abilities. You’ll open the Power Cells in the store, which you’ll find all the way at the right of the main screen’s navigation menu.

Confused by all the different Power Cell types? We can help you with that:

The Wonders of ISO-8 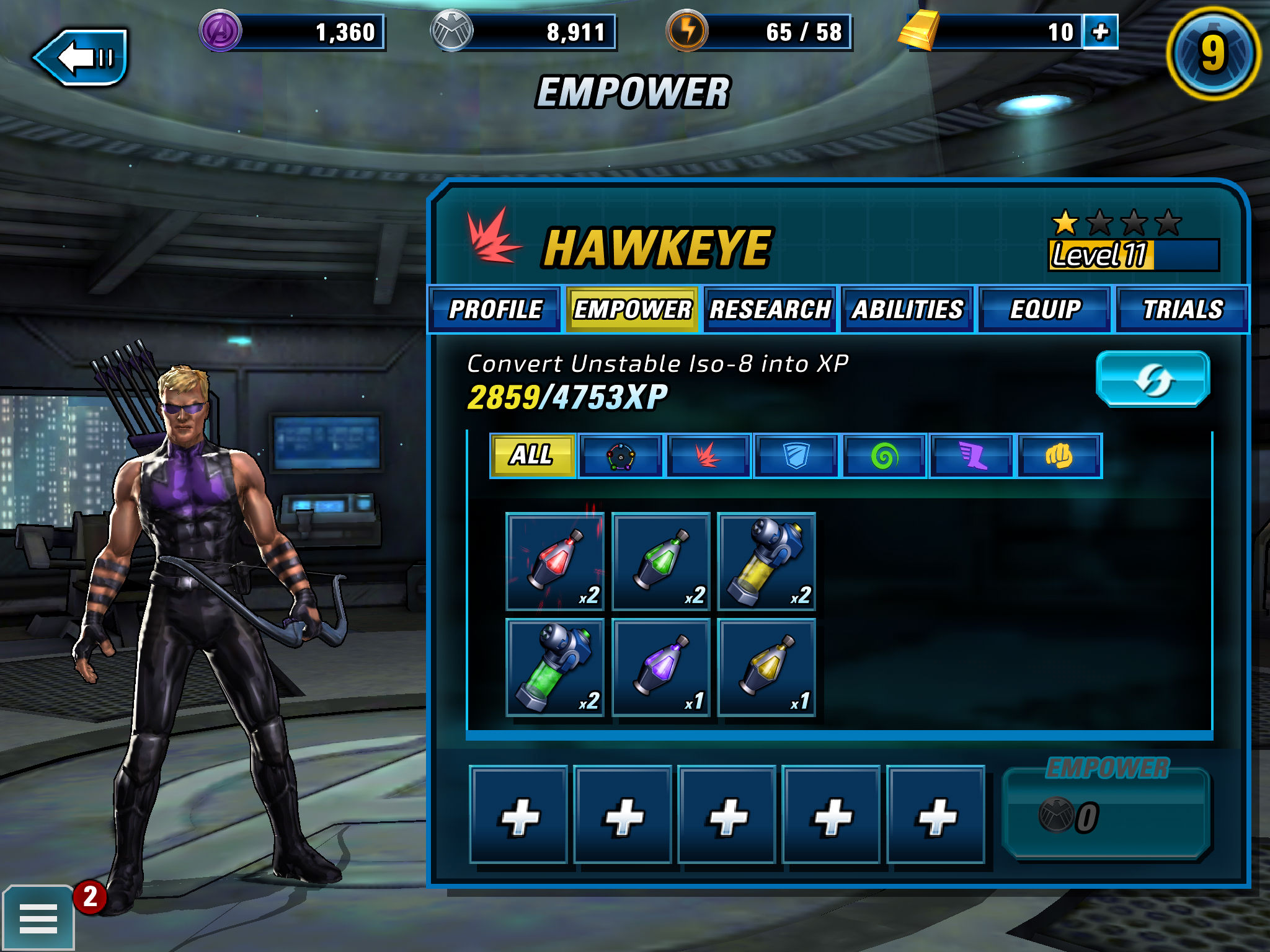 If you’ve been playing Marvel Games for any length of time, you’ll recognize ISO-8 immediately. It’s sort of an extradimensional deus ex machina, an element from another reality that does … well, whatever the writers of a specific game want it to do.

In Marvel: Avengers Alliance 2, it actually does two things, both of which are important. Regular ISO-8 helps level up your heroes faster. Heroes gain experience simply by bringing them into battle, but ISO-8 does the trick much faster. Simply tap the “Empower” tab from a hero’s profile and you’ll see the inventory of Unstable ISO-8 that can be converted into XP.

BONUS TIP: ISO-8 that is the same color as your hero’s class symbol grants more XP, so for example, you should save red ISO-8 for your Blasters, blue ISO-8 for your Bruisers, etc. You can tap the class symbols in the Empower screen to sort them for you. 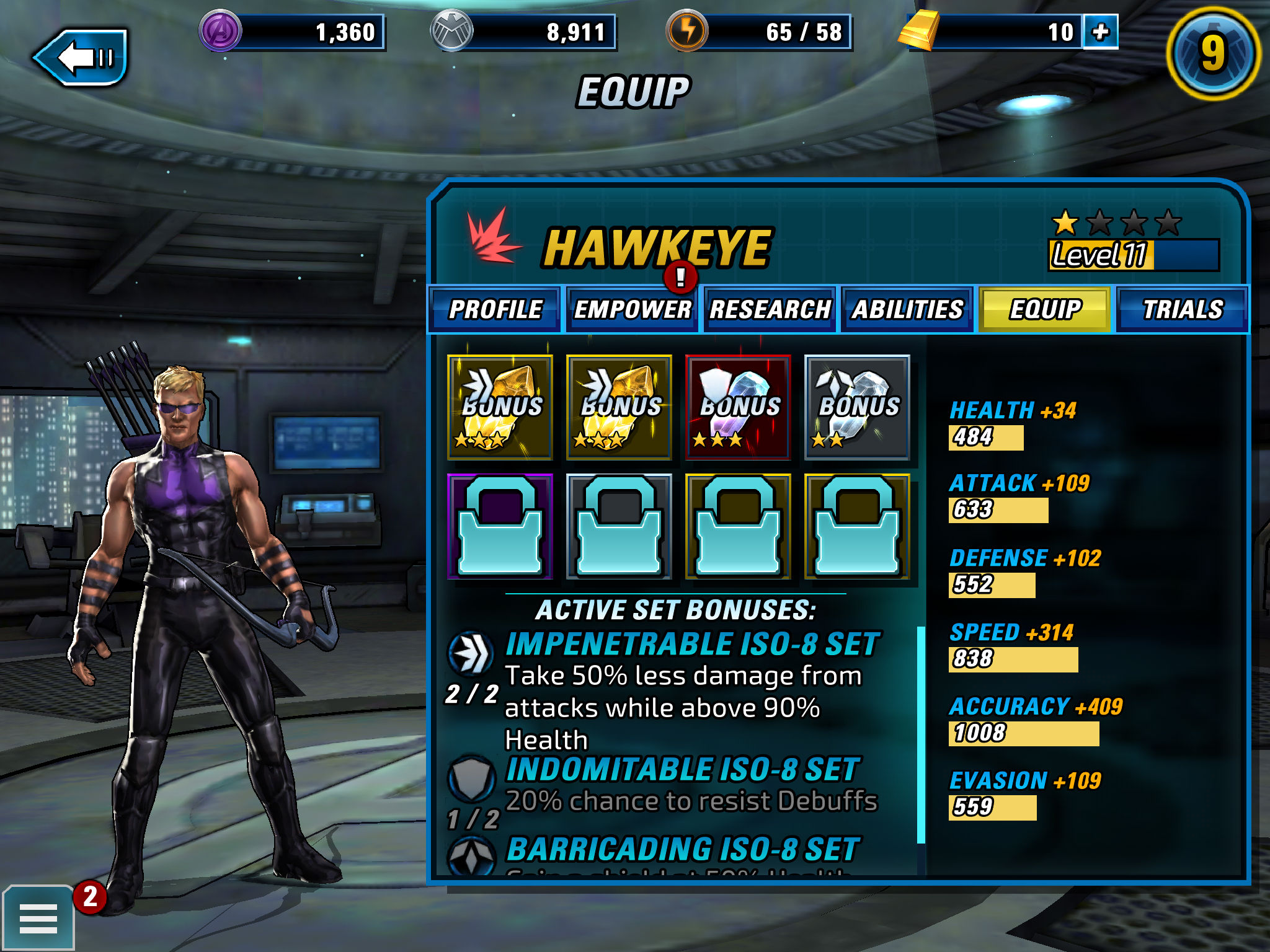 ISO-8 Crystals help power up your hero in a whole different way, granting stat bonuses and buffs of various kinds. You can equip these from the “Empower” tab of the hero profile.

Crystals have cool-sounding adjectives like “Impenetrable” and “Barricading” attached to them, but the easiest way to figure out which ones should be equipped is to look for the set bonus explanations at the bottom of the Empower screen and use Crystals that have the “Bonus” label on them. IOS-8 Crystals come in different rarities, with rarer Crystals offering more impressive bonuses.