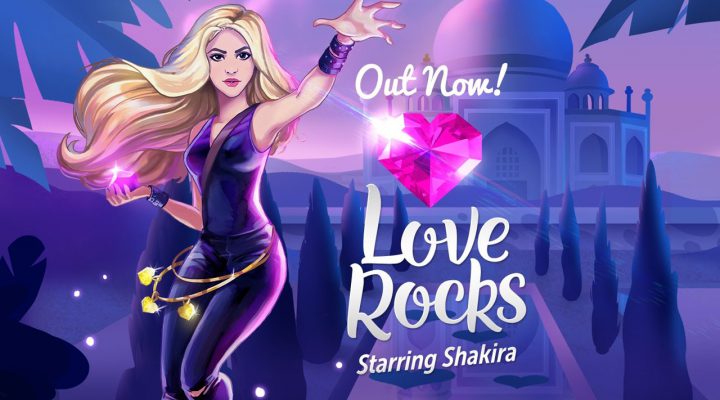 Love Rocks Starring Shakira is a new match-3 game from Rovio Entertainment. While Shakira’s involvement with the game is pretty minimal, the gameplay would hold up pretty strongly with or without her.

Your standard match-3 strategies might come in handy for awhile, but our Love Rocks Starring Shakira tips, cheats, and strategy guide will quickly catch you up on the top strategies to employ while playing the game, to keep you scoring three gold stars level after level.

In Love Rocks Starring Shakira, the game gives you a heads yo about not only the next 3 jewels you’ll have access to, but also the next row of jewels coming up from the bottom.

Look carefully: they’re slightly faded out (which might be hard to see if you’re playing the game outside), but you can make out the colors and symbols enough to know what is coming. Use this knowledge to your advantage. At the end of each set of jewels, the game will clear out the matches and move into the next round; before the round ends, if you have a jewel that you won’t be matching during that round, consider what is popping up in the next round. If a matching jewel is on it’s way, drop it in that line. As soon as the next round starts and the new jewels pop up, you’ll have an instant match.

As matches are cleared, the jewels above them will fall down to fill in the voids left behind by the cleared jewels. Gems that fall down and match with what they land on will instantly clear out as well.

So, for the sake of example, let’s say your bottom row has all green and one yellow jewel. The next row up is all red jewels, but you have one yellow jewel left to drop. If you drop that yellow jewel on top of the red jewel above the other yellow jewel, at the end of the round the red ones will clear out and the yellow one you just dropped will fall down onto the lone yellow, match, and clear out.

This is perhaps the second most useful strategy to keep in mind, behind the “Plan Ahead” strategy mentioned above.

Diamonds Are a Player’s Best Friend

If a player matches every jewel they drop during a round, a diamond will appear on a random position on the board.

Diamonds are worth a good chunk of points, and snagging diamonds is the easiest way to meet some level’s score requirements, so you’ll want to summon in diamonds as much as you can.