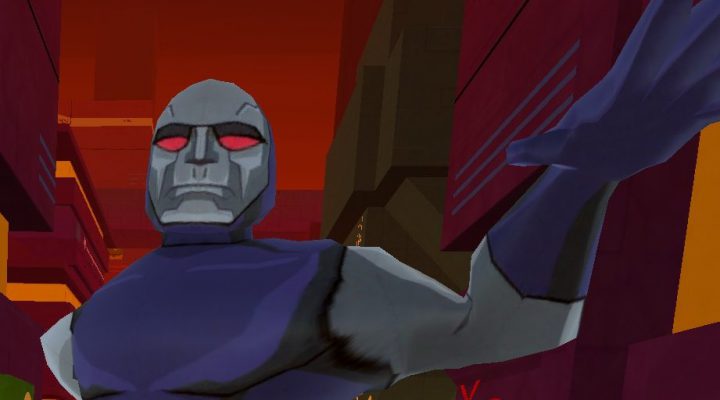 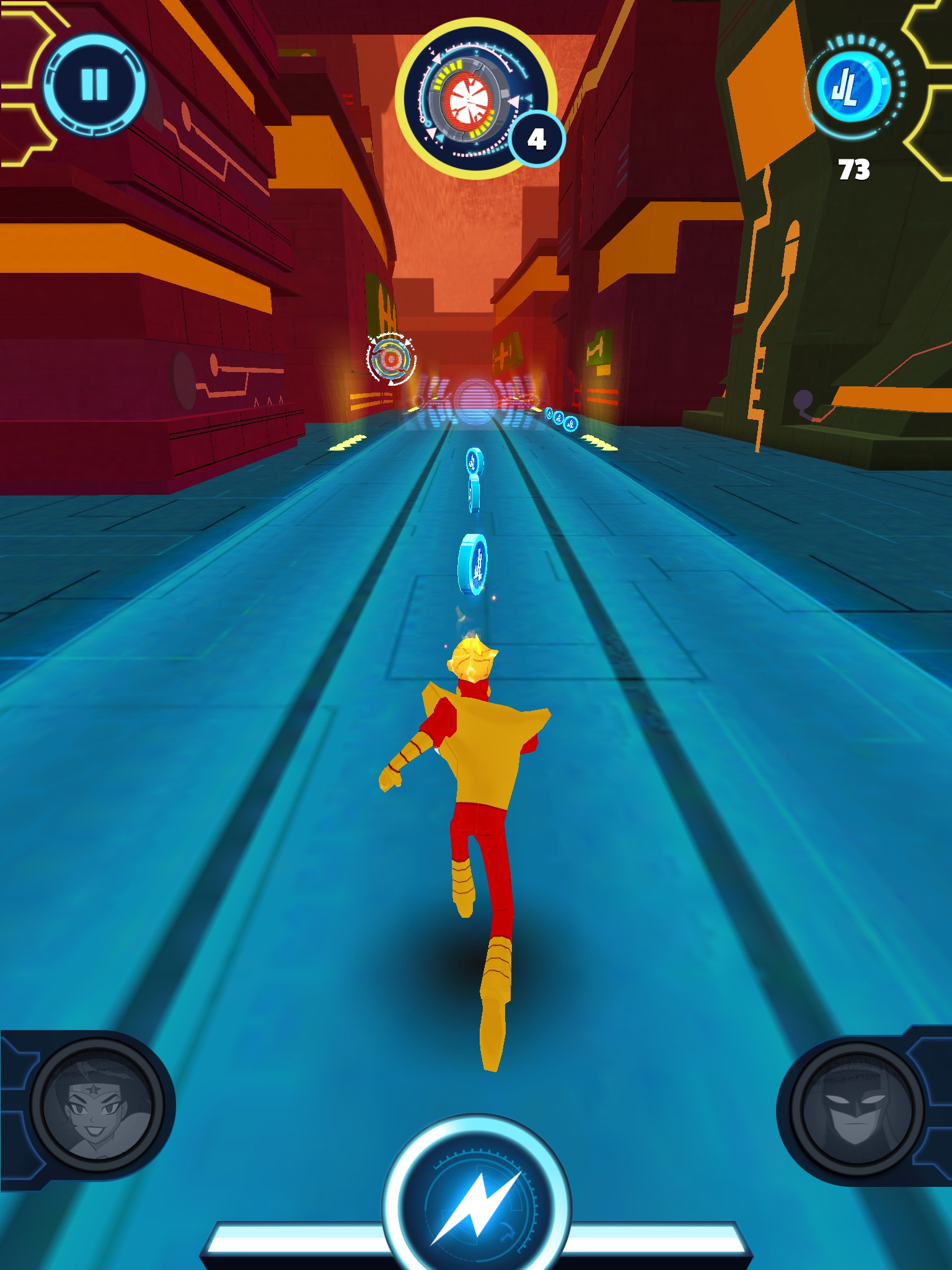 There are 15 missions in total to conquer in Justice League Action Run, broken down into 15 chapters of five missions each. Once you pass the tutorial, you’ll be taking three heroes into each mission with you. Your goal is to complete the task set out in the mission brief with at least one of your heroes intact.

Once you’ve accepted your mission, you’re launched into gameplay, running forward into a seemingly endless obstacle course. You have the ability to jump over, slide under and attack obstacles as well as three lanes of traffic to use to your advantage, giving you the ability to move around obstacles rather than take them on directly. 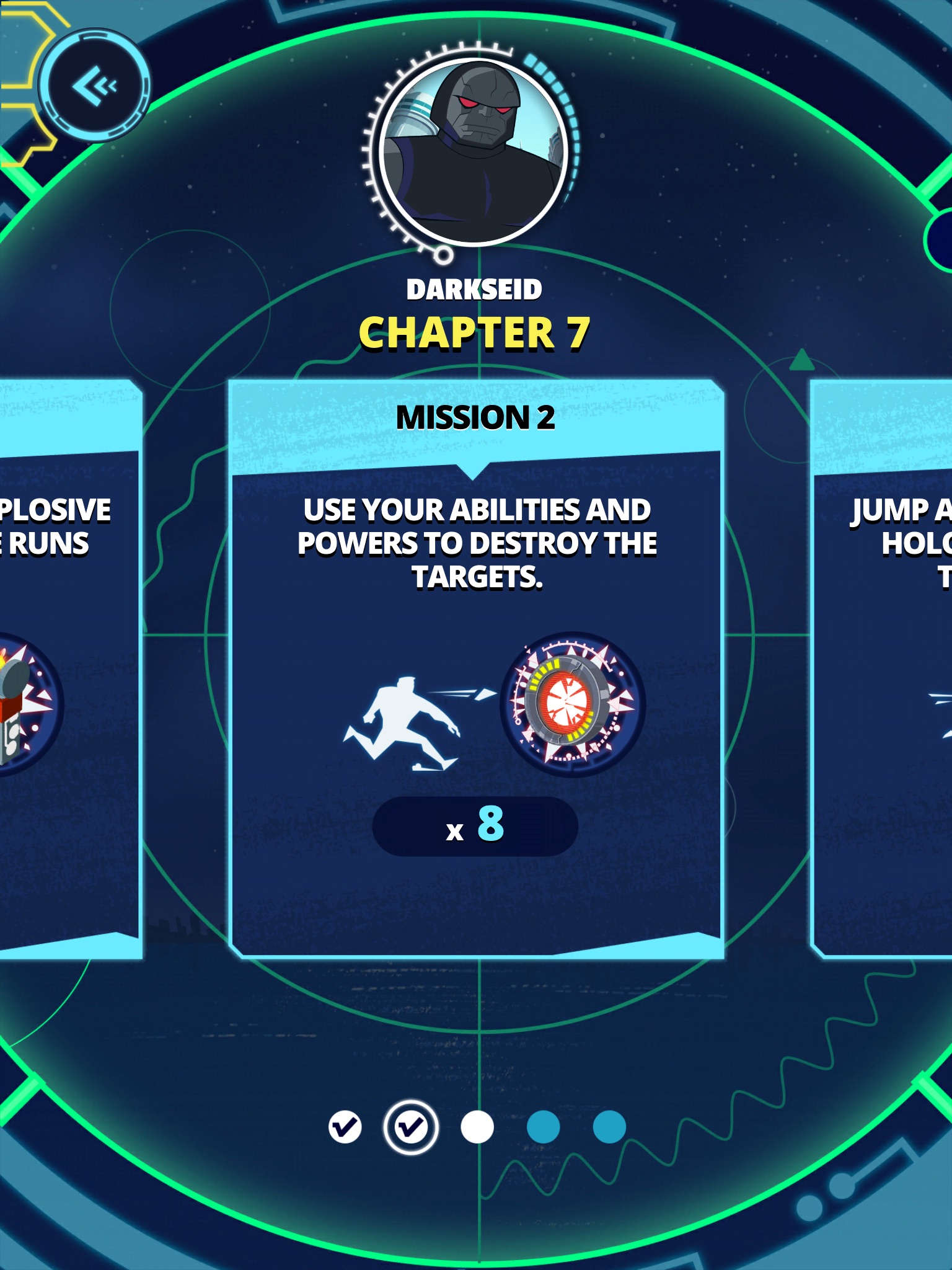 There are six basic mission types in play in Justice League Action Run. Each chapter concludes with a ‘Defeat the Boss’ mission and contains a mix of four of the other five mission types.  As you progress through the game the mission types remain the same, but the length of the run or the number of objects to collect or destroy increases. 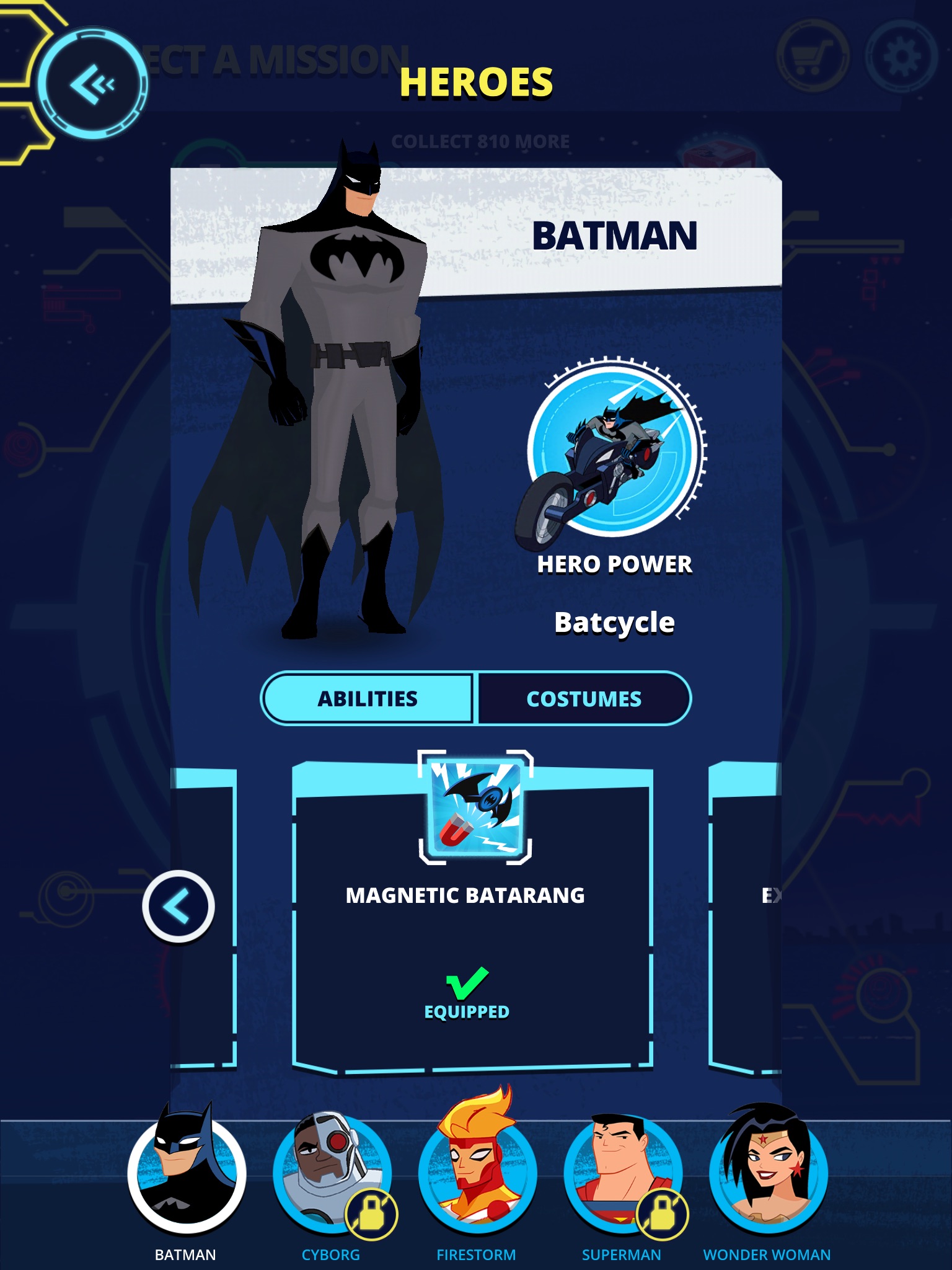 While you can only take three heroes into each run with you, there are five heroes in total to choose from – Batman, Wonder Woman, Firestorm, Superman and Cyborg. You’ll start the game with a single hero (Batman) and quickly unlock two additional heroes (Wonder Woman and Firestorm) so that you’re working with a full team. In order to unlock Cyborg and Superman you’ll need to collect five emblems from the Justice Packs given out as a reward for levelling up and chapter completion. 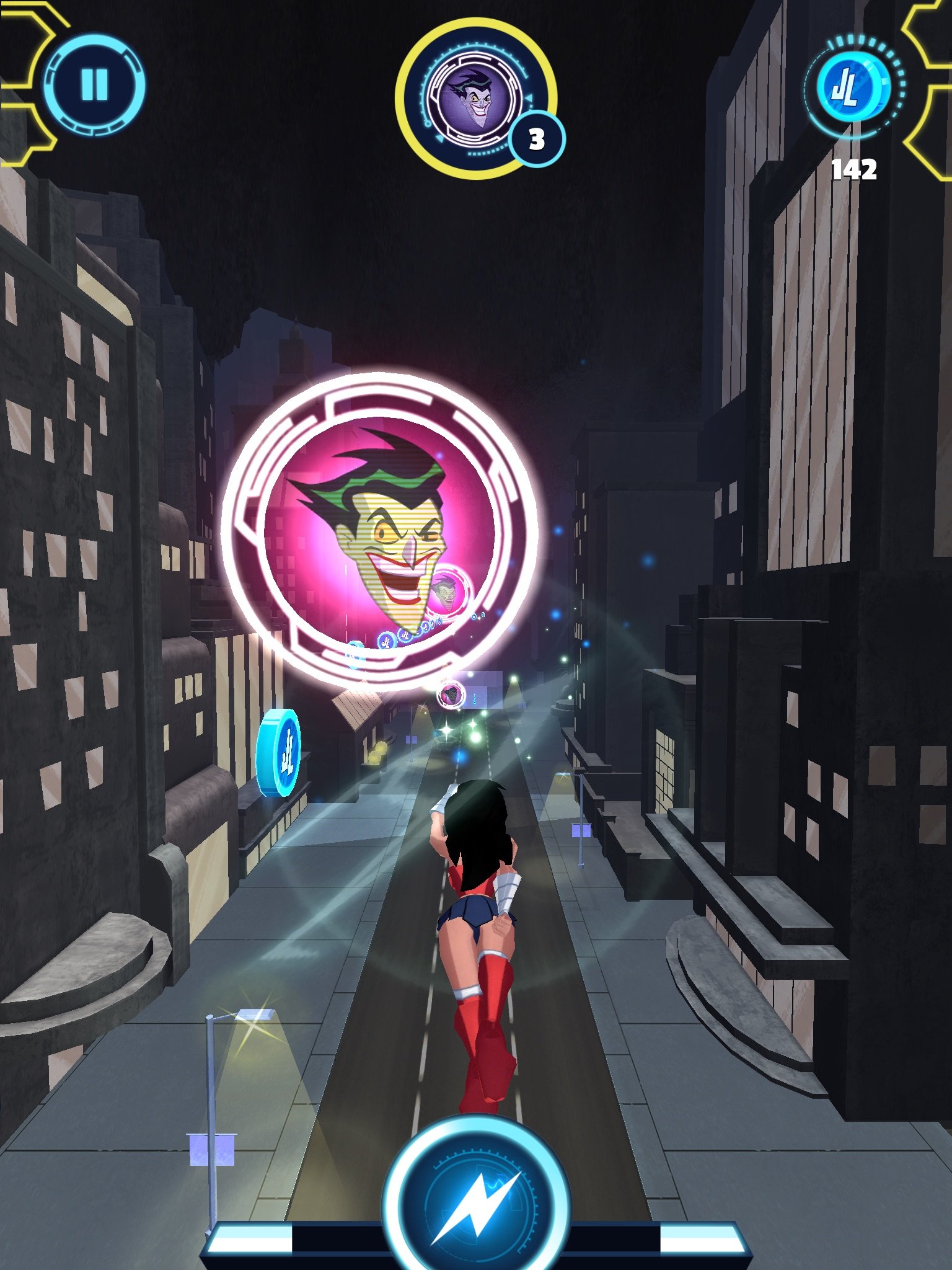 While each hero’s hero power can give you a big boost, it can take quite a while to charge the meter. The meter is charged by collecting the green energy symbols found throughout the run. Deciding when to use your hero power is one of the tougher decisions you’ll have to make while playing. Because you can’t carry over a partially full hero power meter into your next run, using the power soon after charging the meter will generally be your best bet. Just make sure you’ve switched to the hero who’s power you want to unleash first! 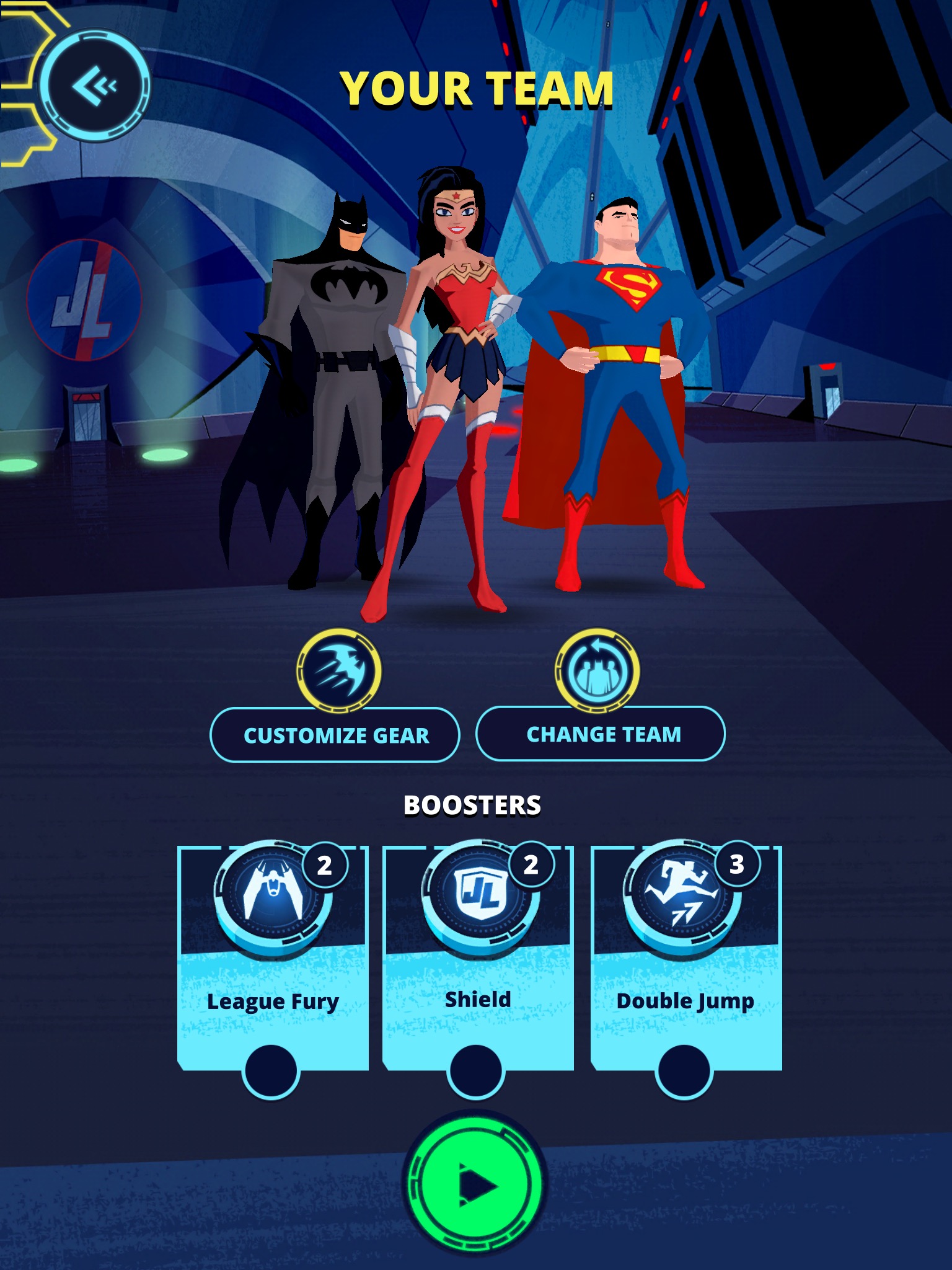 If you’ve made sure you’ve equipped your most powerful abilities, chosen your heroes carefully and aren’t forgetting to use your hero power, yet still find yourself struggling to complete a Justice League Action Run mission, it might be time to use a boost. There are three boost types in Justice League Action Run – League Fury, Shield, and Double Jump. League Fury helps you destroy a bunch of obstacles at once when enabled, Shield protects your hero from getting knocked out of the run at first contact with an obstacle, and Double Jump helps you reach those items that seem just out of reach. Boosts are fairly rare. They are generally found in Justice Packs, which means that unless you can buy additional Justice Packs through in-app purchases, it’s unlikely you’ll have more than a couple of each type at any one time, so save them for when it really counts.

How to Unlock Everything in RollerCoaster Tycoon Touch