Home / Walkthroughs, Tips, and Cheats / How you can get rare characters like Rick, Michonne and Daryl in The Walking Dead: Our World

How you can get rare characters like Rick, Michonne and Daryl in The Walking Dead: Our World 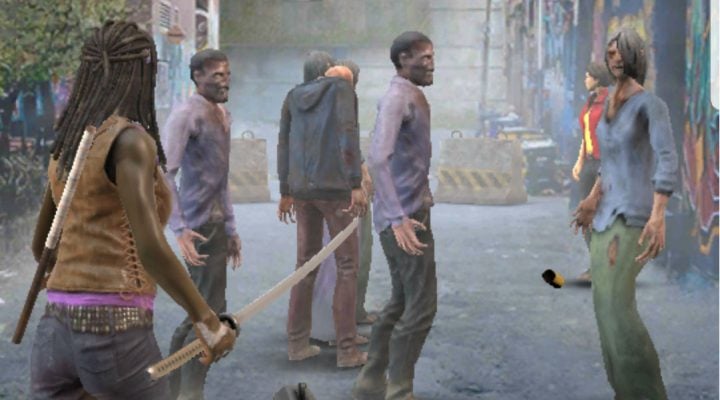 Surviving in a world overrun by the undead isn’t easy, but at least you don’t have to go it alone. Just like the TV show and comics upon which it’s based, The Walking Dead: Our World emphasizes the idea that no one makes it very far in post-apocalyptic life without someone else watching your back.

In other words, you’re not the only hero in this particular mobile game. By picking up Hero cards, you can bring one character into every battle with you as your Companion. It’s not only a nice feature, it’s essential for winning the many encounters you’ll have with hordes of walkers as you play. Companions act on their own, shooting or slashing away at walkers and generally making your life easier in every battle, though you do have to watch out for them being overwhelmed and taken down, which will put them out of action for a time until their cooldown timer expires.

A number of Heroes are just regular survivors created for The Walking Dead: Our World, hearty folks who are especially good at taking it to zombies and have their own weapons of choice. However, there are also Rare Heroes (and better, as the game includes Epic and Legendary characters as well) who are not only more powerful, they are faces you’ll instantly recognize from the source material. We’re talking about people like Rick Grimes, Michonne and her sword, and Daryl Dixon and his trusty crossbow.

You’ll definitely want these characters on your team, not only for the coolness factor but also because they are so helpful to have fighting by your side. So how do you get rare characters? That’s what we’re here to explain, and it starts by discussing all the ways you get Hero cards in the game.

This is the simplest way to add some Hero cards to your collection and increase your chances of coming across Rare or better Heroes. Every Encounter with walkers has one of two rewards; either a survivor who you can drop off at a Safe House or a card. You can tell which one you’ll get by looking for a little stick figure or card icon by the skull that signifies and Encounter, and in our case, we’re interested in the latter.

Encounters that guarantee a Rare or better card have a colored glow by them: Blue for Rare, purple for Epic and yellow/orange for Legendary. If you see one of these pop up on your map, you’ll want to make it a priority.

Drop survivors off at a Shelter

There are four different types of Safe Houses you can build in Our World, each of which delivers a specific kind of reward when you drop off a survivor there. For Heroes, you’ll want to build or locate a Shelter, which will give you a Hero card for every life saved.

But don’t stop there if you want to increase your chances at finding Rare Heroes. Every Shelter can be leveled up by the cumulative efforts of everyone who uses it. Higher level Shelters offer better rewards, thus increasing your chances of receiving Rick, Michonne, Daryl or one of the gang from TV. Your best bet if you play the game regularly is to build a Shelter as close to where you live as possible, so every day you can drop off some survivors there and work your way into better chances at Rare Hero cards.

Look for special deals in the Shop

Though your goal may very well to spend as little real world money as possible while playing The Walking Dead: Our World, we’d be remiss if we didn’t mention the fact that the in-game Shop does offer shortcuts to some of your favorite characters. It’s safe to assume that these kinds of offers will always be part of the game.

Dropping a few bucks could be the most direct way to ensure not only that you get one of your favorites as a Companion, but also that you can choose the specific one you’ll receive instead of leaving it to chance. It’s not the way we’d necessarily endorse the highest, but it’s there if you need it, and it’s probably worth keeping an eye on what’s rotating through the Shop every so often just in case.

Battleheart 2 guide: Tips, tricks and strategies to help you battle your heart out