Home / Walkthroughs, Tips, Cheats / How to Get 5-Star Heroes in Fire Emblem Heroes 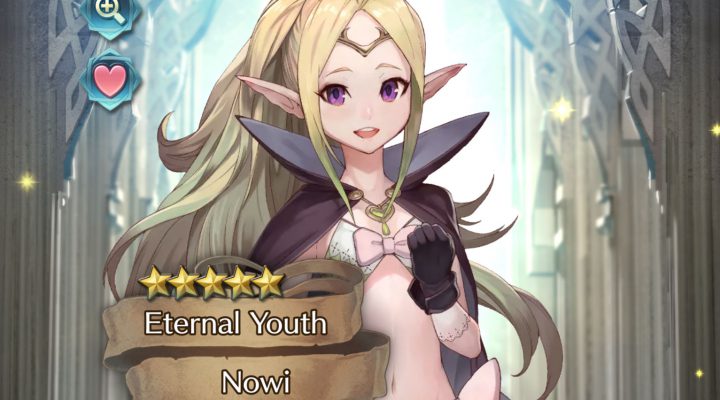 More than anything, Fire Emblem Heroes is a celebration of the Fire Emblem series. Nintendo’s mobile game brings characters from just about every previous title together and even presents a semi-plausible story that explains why they’re all crossing paths. Actually, by Fire Emblem standards, it’s completely logical.

Attempting to get your favorite characters is a big part of the fun, but let’s be honest: you also want the most powerful heroes you can find. That means getting some 5-star heroes, and because the game’s red-green-blue triangle is so important in battle, it’s probably good if you nabbed one or two of each color.

We’re going to help you find some. No guarantees, of course, but we’ll point you in the right direction and maximize your chances. Sound good? We thought so.

Save at Least 20 Orbs 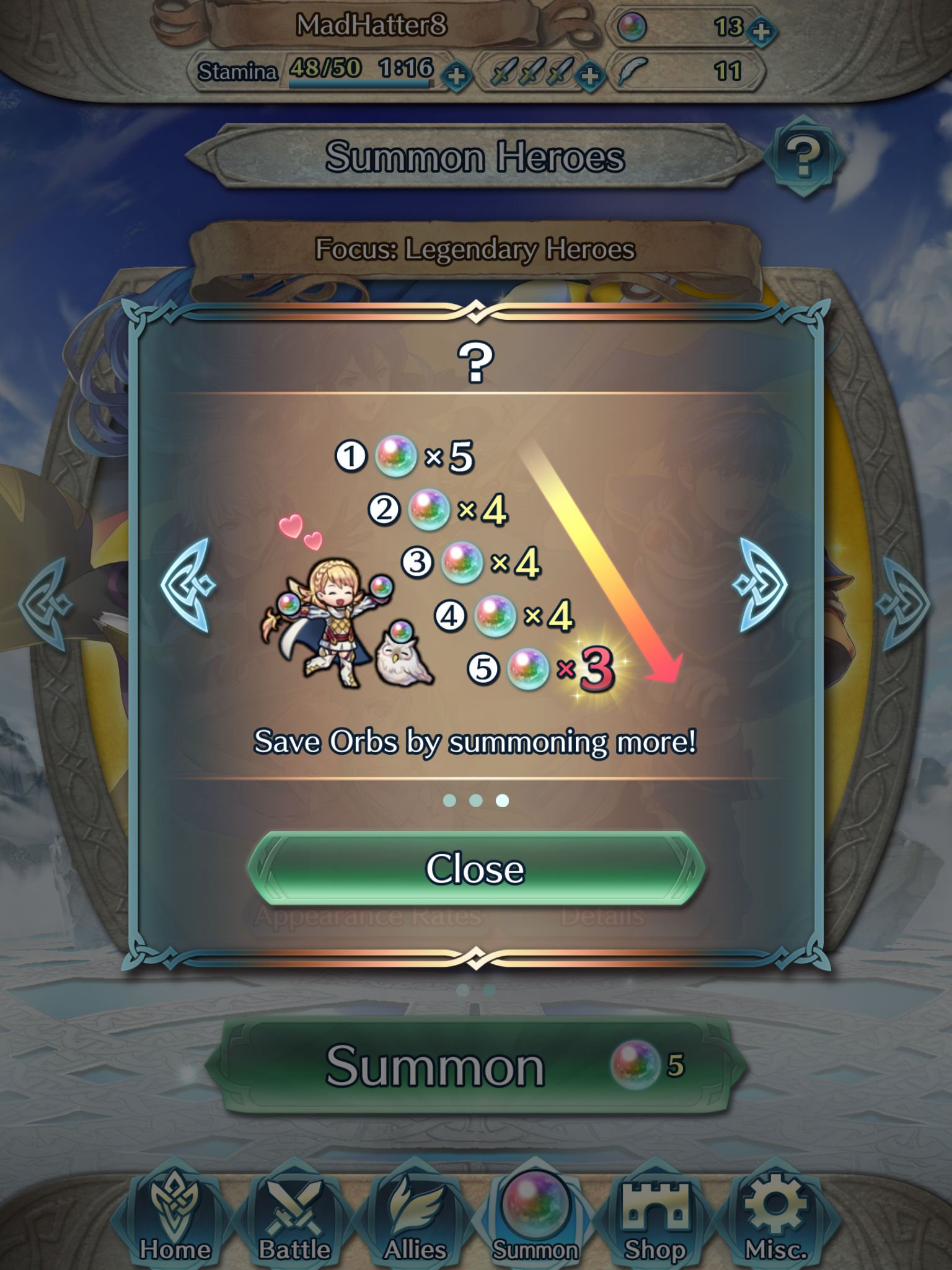 Orbs are the Fire Emblem Heroes premium currency, taking the form of small globes. You earn them sparingly, receiving one each time you clear a new story or special map (but only for the first clear) and occasionally as log-in bonuses or for completing quests. Orbs can also be purchased for real money if you’re so inclined. They’re certainly precious enough not to waste.

By tapping on the ‘Summon’ icon in the game’s main bottom navigation menu, you’ll be taken to a screen where you can spend Orbs to summon heroes. It costs five Orbs for one summon, but you should always save 20 if possible.

Why? Because doing consecutive summons makes your second through fifth summons cheaper. If you press on after your first, you’ll find that your second, third and fourth summons only cost four Orbs each, while your fifth will be three Orbs. Those savings add up over time, and since your chance of snagging a 5-star hero is only around 6 percent for a single summon, you’ll want to make the process as efficient as possible.

Failing Often is a Good Thing 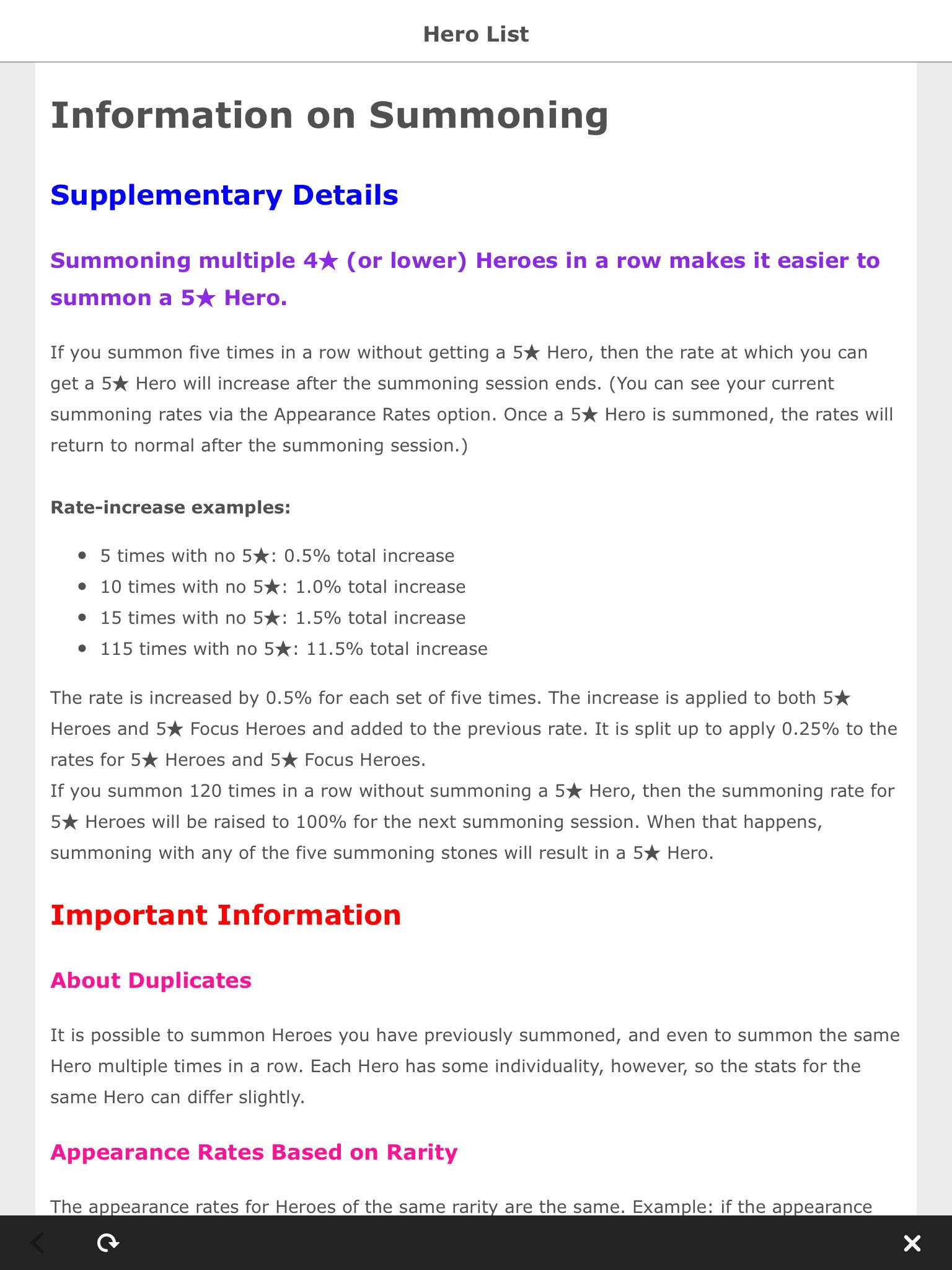 Another very good reason to summon in groups of five is that if you pull all 4-star or lower heroes, your chances of finding a five-star character on your next summoning session goes up. This is a nice feature you don’t always find in games that rely on a gacha mechanic like this one.

For every complete group of five summons you complete without acquiring a 5-star hero, the percentage chance for finding one the next time you summon goes up by 0.5 percent. If you somehow manage to go 120 summons without any success (which would be 24 complete summoning sessions), your chances will be at 100 percent the next time you summon, and any stone will yield either a 5-star or 5-star focus hero.

The most important thing to remember is just not to give up. While 5-star heroes don’t grow on trees in Fire Emblem Heroes, the systems in place mean you’re almost certain to grab some if you just keep playing. Good luck!