Home / Walkthroughs, Tips, Cheats / How to Earn Korpens to Unlock New Agents in Modern Combat Versus 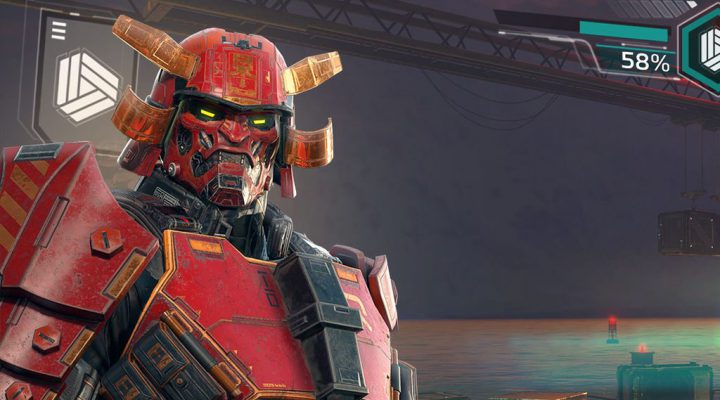 Modern Combat Versus is an objective-based multiplayer first-person shooter by Gameloft. Instead of unlocking different weapons and loadouts you can equip to your character, there are twelve preset Agents to choose from, each with their own skills and specialties. You begin the game with three of these Agents—Lock, Kan, and Mi-Nu—unlocked and must spend in-game currency to add any others to your roster.

There are a number of different currencies and point systems in Modern Combat Versus, but the two that are used to purchase Agents are Korpens and Diamonds. Diamonds are the rarest reward in the game and should not be used to unlock Agents unless absolutely necessary (one Agent, Kult, can only be purchased with Diamonds). Korpens are primarily earned just by playing the game, although there is a cap on how many you can earn this way in a single day. 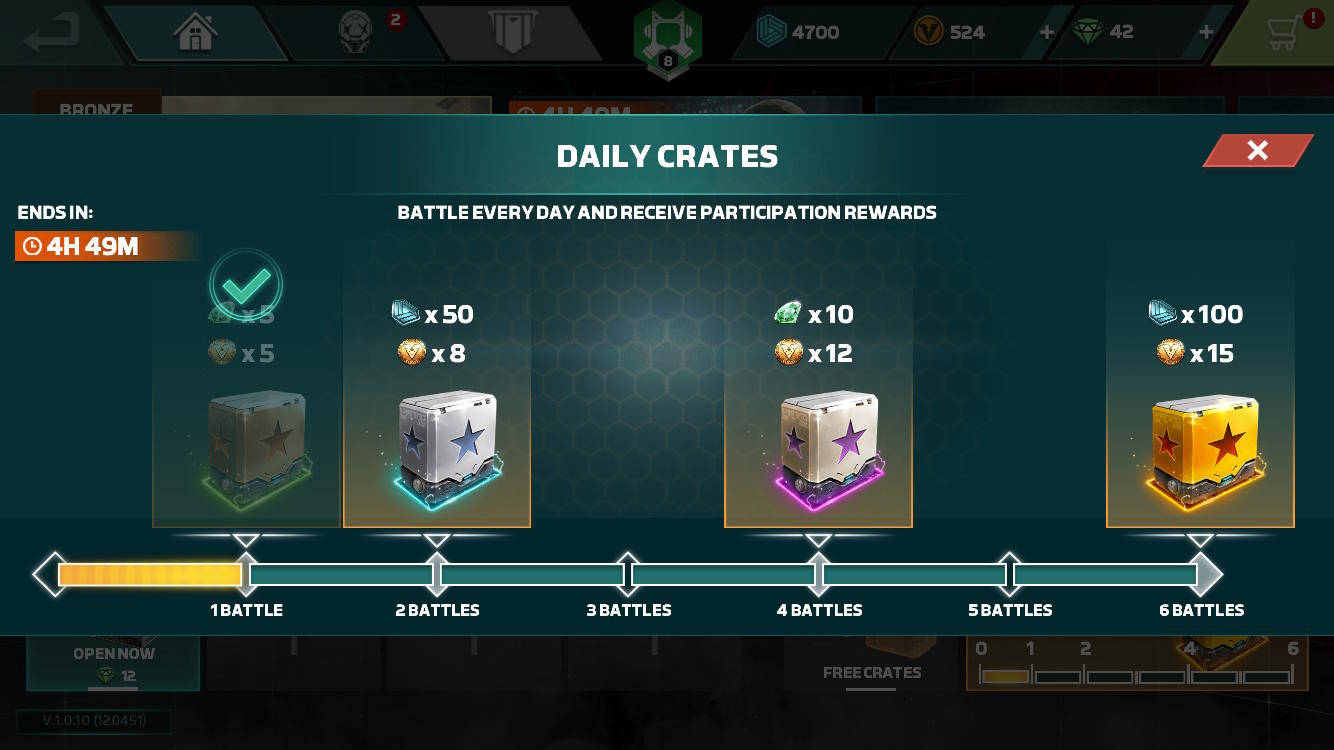 You earn Daily Crates simply by playing matches, and both multiplayer and solo play count towards the Daily Crate requirements. You don’t have to win the battles to receive these crates. Simply playing and finishing a game will count towards earning them.

To collect a Daily Crate once you’ve earned one, just tap the Daily Crate banner on the menu (there will be a red exclamation mark when one is available). These crates are opened automatically, so you don’t need space in your unlocking queue. The second Daily Crate (earned for two battles) includes 50 Korpens and the fourth crate (earned after six battles) includes 100 Korpens. So, simply by playing six battles in a given day, you’ll receive 150 Korpens. 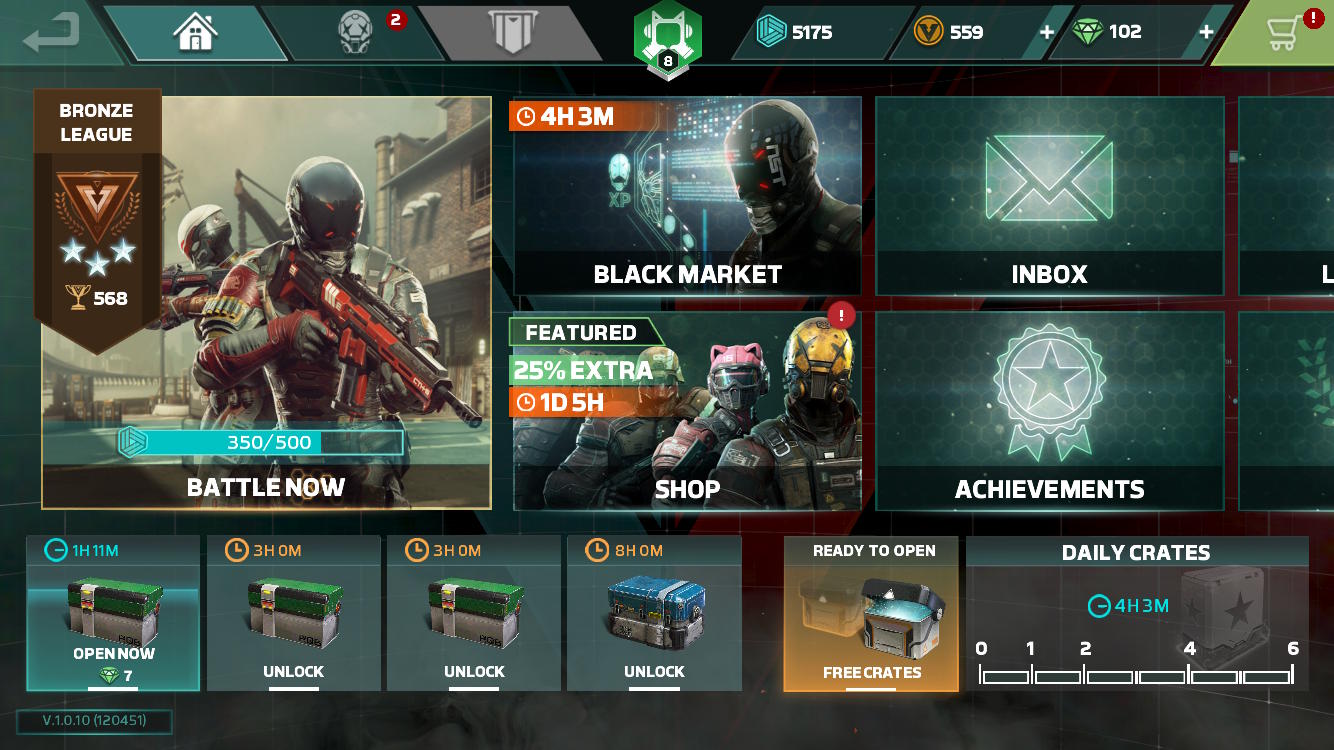 While you’re earning those Daily Crates, you’ll also be collecting Korpens for the battles themselves. Every time you complete a battle—again, single- or multiplayer applies—you’ll earn some Korpens in addition to player EXP. You win 25 Korpens for a loss and 50 Korpens for a victory.

There is a limit of 500 Korpens rewarded from battles per 24-hour period. The blue bar on the “Battle Now” banner in the menu displays how many Korpens you’ve earned out of this 500 limit. (In the image above, we’ve earned 350/500 of our available battle Korpens.) Unlike the Daily Crate, which resets at the same time each night, the Korpen limit seems based on when you first started earning for the day—so if you received your first 50 Korpens for a win at 8AM, the limit would reset at 8AM the next day. 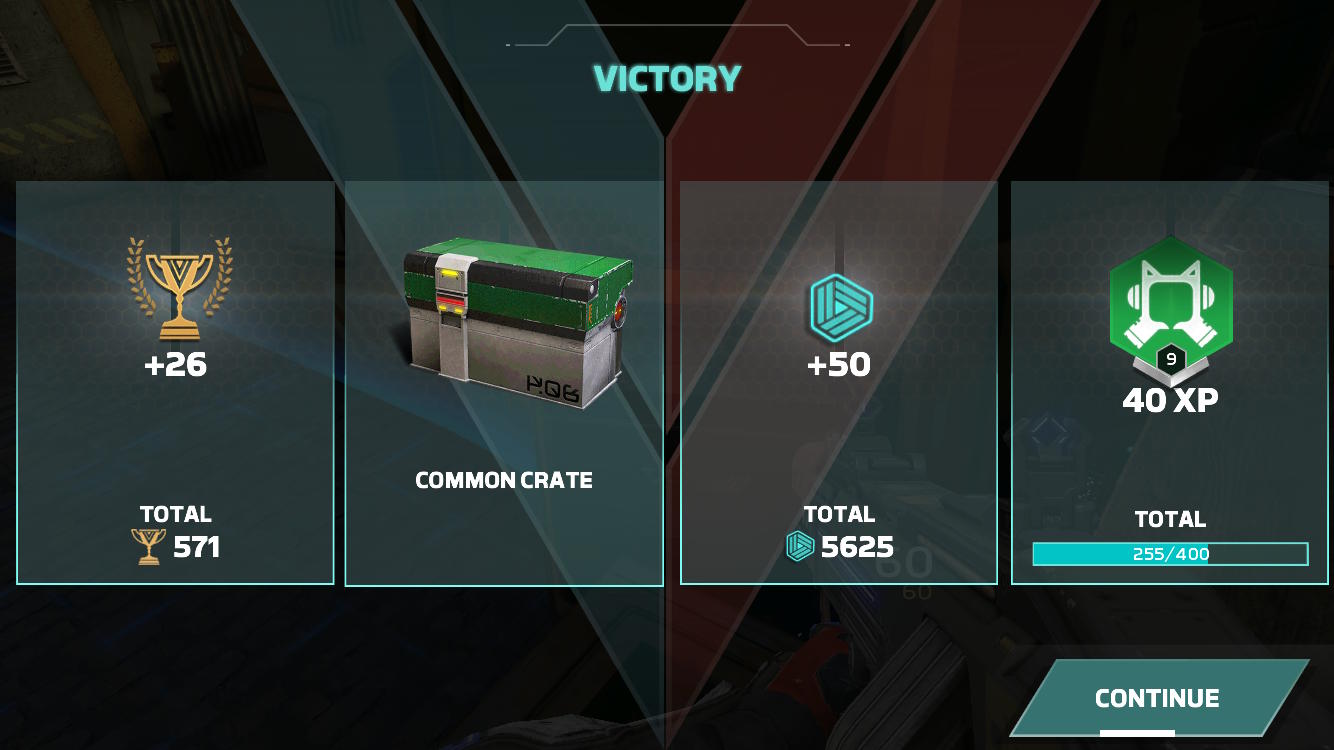 Once you reach the 500 max, you can still play, but you won’t receive any more Korpens until this bar resets. If you win every match, it would take ten battles to earn your Korpens for the day. So, at a minimum, by playing ten battles per day you could earn 750 Korpens between Daily Crates and battle rewards.

If you just want your battle Korpens but don’t really feel like playing, you can enter a single-player match and let the game run. There is no idle timeout in single-player, so you can leave the bots to play and earn 25 Korpens at the end of the match without doing anything (assuming your team loses without your help). This would also apply towards your Daily Crate totals. 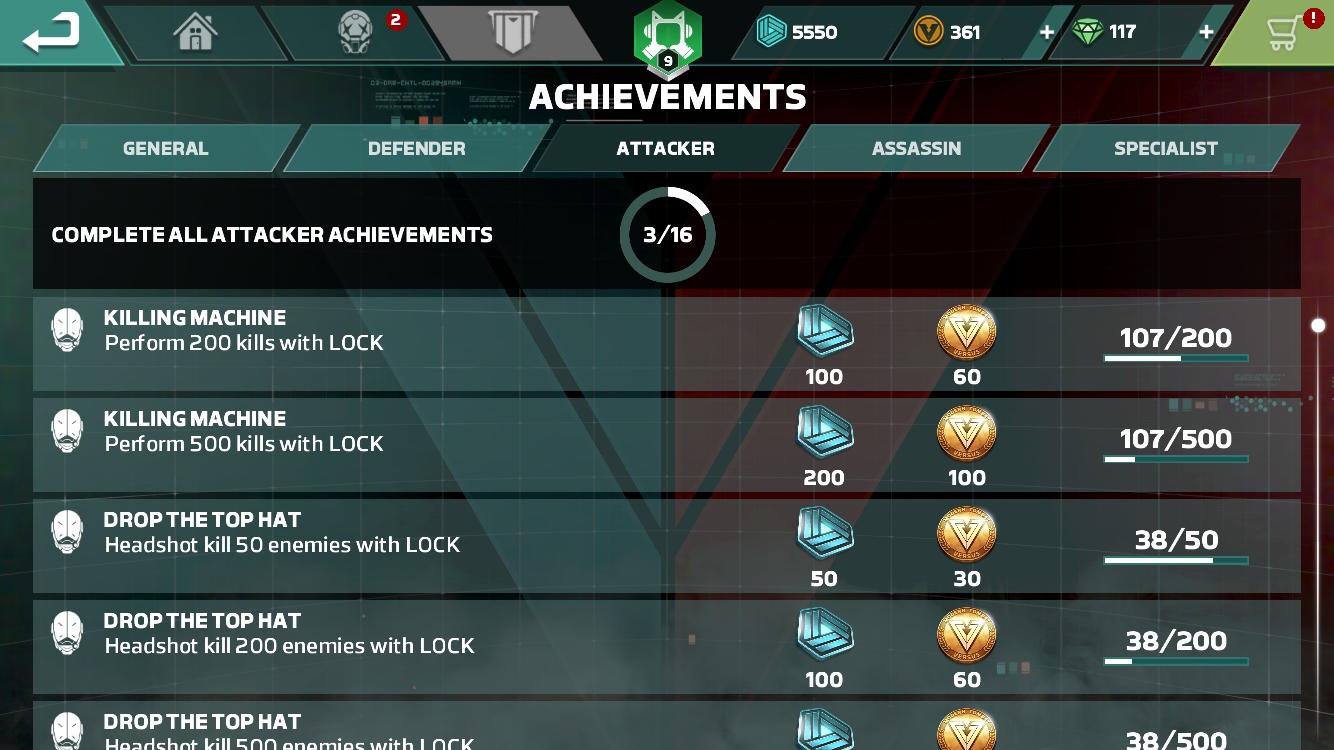 There are a number of achievements based on hitting certain milestones in Modern Combat Versus. Most of these are related to kills and victories, such as “Win 50 Multiplayer matches” or “Perform 500 kills.” All of these achievements award Korpens and Versus Coins: once completed, just enter the Achievements section from the menu and find your finished tasks (there are tabs at the top marked “General,” “Defender,” etc. and any category with a completed achievement will have a red exclamation mark). Hit the “Claim” button on any that are completed to collect their reward.

Each character has their own set of achievements as well, so mix up the Agents you play with to keep earning these bonuses. Note that kills performed in single-player mode against bots do not count towards kill achievements; they must be earned in multiplayer. 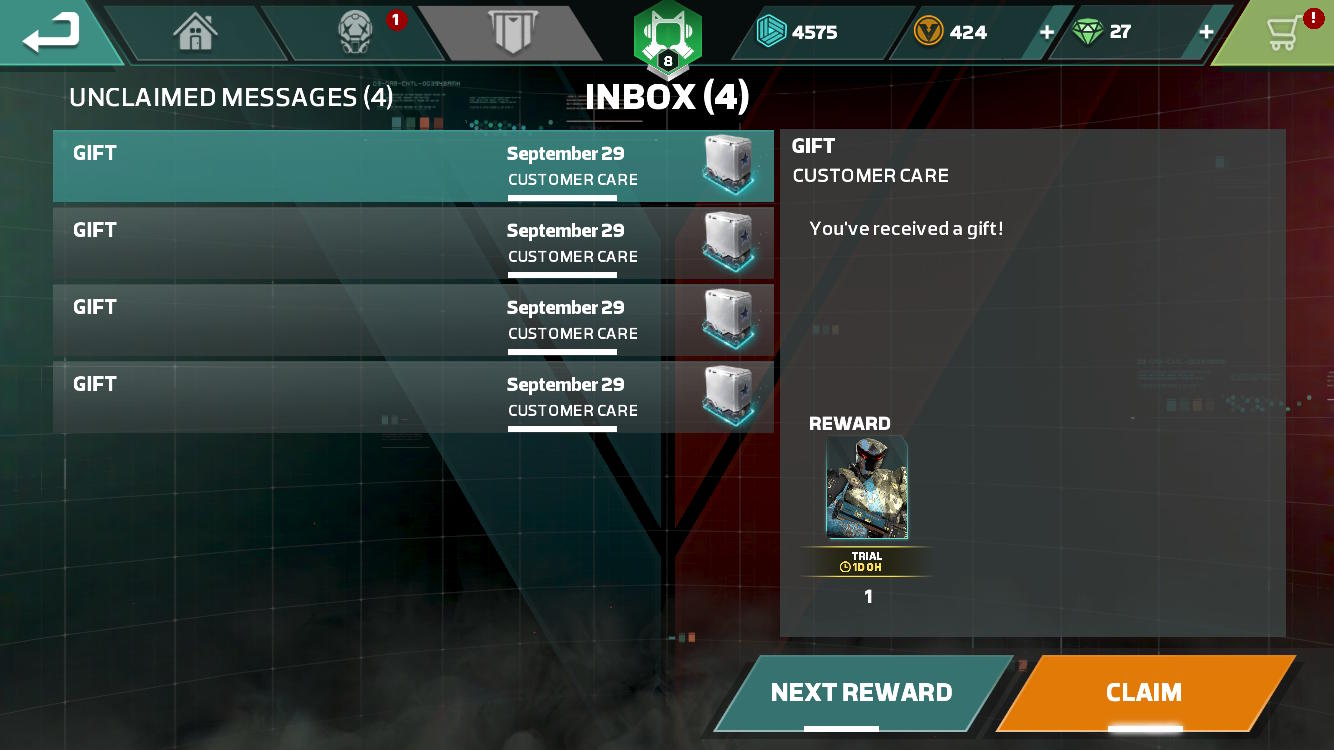 If you’ve unlocked a trial Agent—and Gameloft is currently sending out a number of trial Agents to players’ in-game Inboxes to celebrate the launch—kills performed with that Agent do count towards achievements. So, you could use a trial Agent to earn Korpens towards eventually purchasing that Agent.

Achievements are one-time rewards, so once you’ve completed a task and claimed its bonuses, you won’t be able to collect it again. 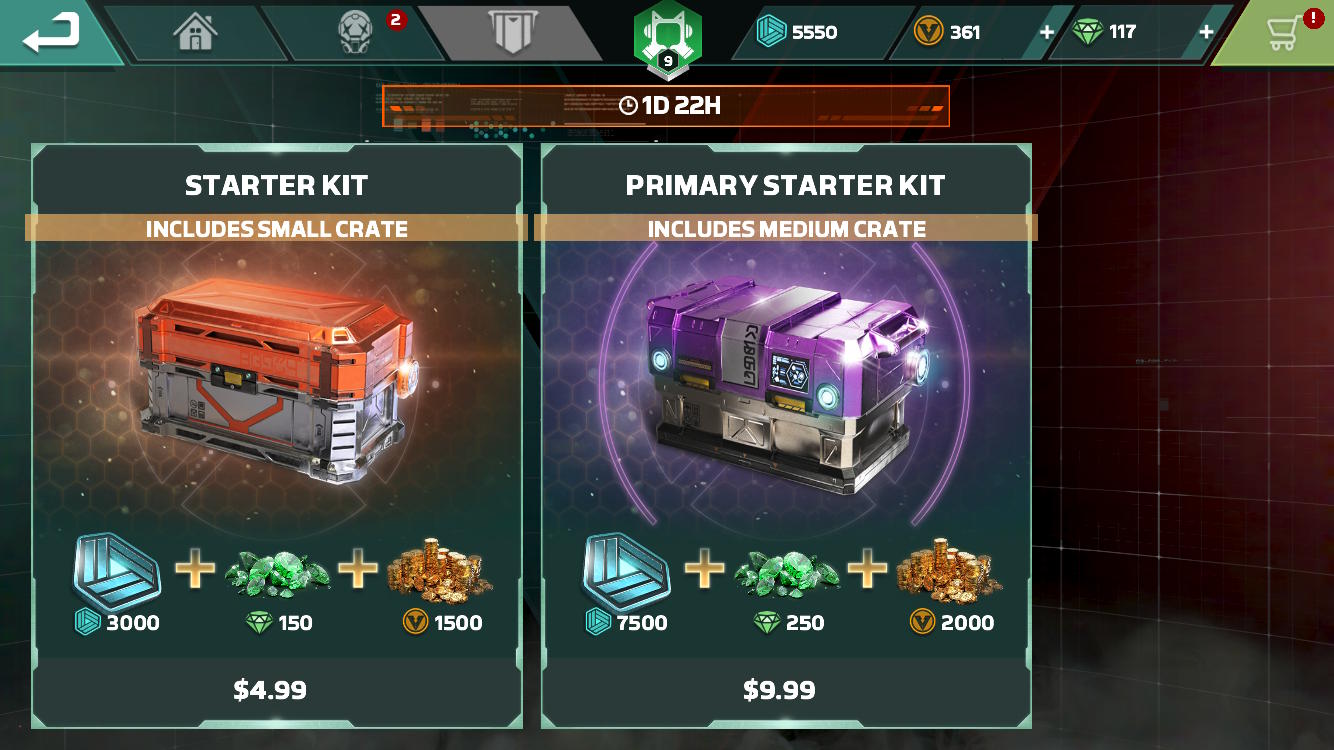 If you’re really eager to unlock a specific Agent, you can always purchase Korpens from the store. Unlike Diamonds, which have a direct purchase option available, Korpens can only be bought via the Shop’s crates and bundles.

Crates in the Shop cost Diamonds and award anywhere from 185-215 Korpens in the small crate (costs 130 Diamonds) to 750-850 in the large crate (540 Diamonds). Bundles can be purchased with real money directly, although they are time sensitive so the bundles available will vary. At launch, a Starter Kit cost $4.99 and awarded 3,000 Korpens, 150 Diamonds, 1,500 Versus Coins, and a small crate.

Comparatively, 350 Diamonds cost $4.99 as well. With 350 Diamonds, you could only afford a medium crate, which awards 425-475 Korpens (as well as 215-235 Versus Coins and EXP for two Agents). So the bundles are a much better deal if you choose to spend real money. However, with a guaranteed 750 Korpens per day simply by playing enough, win or lose, you can unlock any Agent except Kult with enough patience and playtime. 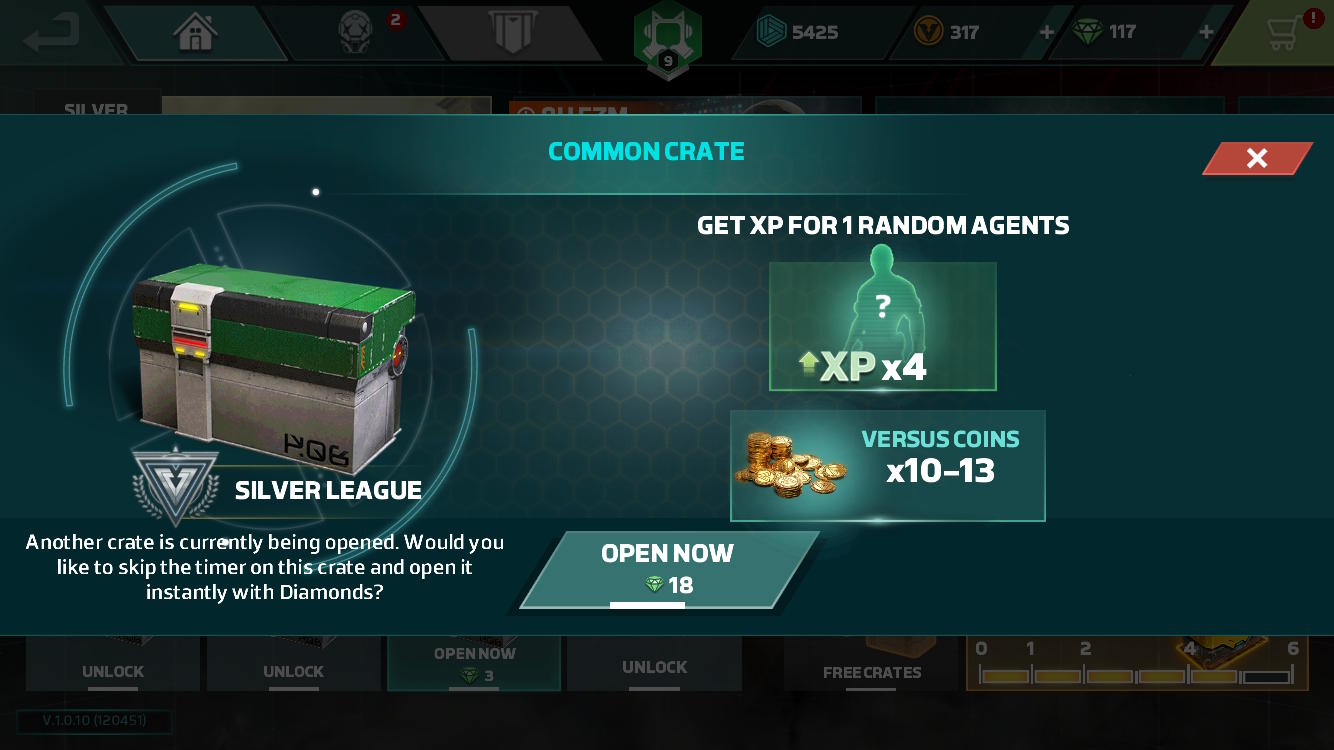 The primary way to earn Korpens in Modern Combat Versus is via Daily Crates, achievements, and simply playing battles. But since there are a lot of other rewards coming at you in a given day, we wanted to clarify which items do not contain Korpens.

Victory crates—earned for winning a multiplayer battle or three single-player fights—do not contain Korpens. These are the crates that are added to your unlock queue and take time to open. You will receive Agent EXP and Versus Coins in these crates. The type of reward in these are the same regardless of League level or crate rarity; higher levels just award more of the same.

The free crates you can collect every four hours—available right next to the Daily Crates—are also Korpen-less. These are like lesser victory crates and award a smaller amount of Agent EXP and Versus Coins.

Leveling up as a player—the number next to your name when you enter battles—does not award Korpens. You earn new emblems as you gain higher levels, however, so don’t waste Diamonds buying emblems.

The Black Market does not sell Korpens, although this could change in the future. So far, the only type of item available in this shop is Agent EXP, but we’d keep an eye on this space just in case Gameloft slips some surprise goodies onto the shelf.