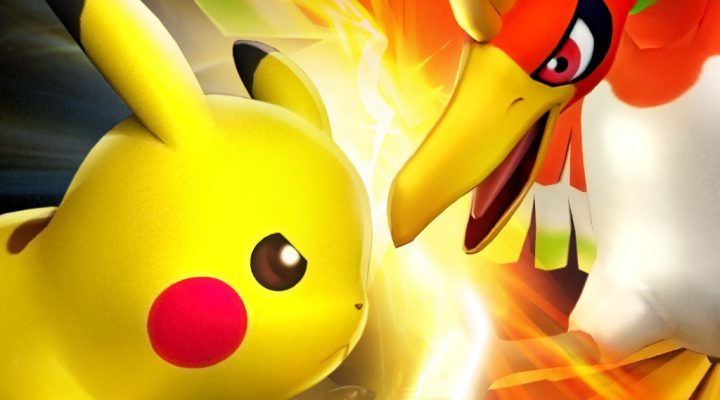 One of the coolest parts of Pokemon Duel is the way the developers have taken familiar aspects from the trading card game and adapted them to a strategy board game structure. One of those concepts is evolution, which fans all around the world know allow Pokemon to change into more powerful forms.

Evolutions are present in the game in the form of Pokemon figures for different stages of all the time-honored changes. Just as Pichu can become Pikachu who can become Raichu in the TCG or previous Pokemon video games, such is the case in Pokemon Duel.

But until you dive in and absorb all the tutorials and play some matches, it’s not obvious how evolution works or why you should use it. We’ll explain it all for you right here so you’re better prepared to handle your opponents when you duel. 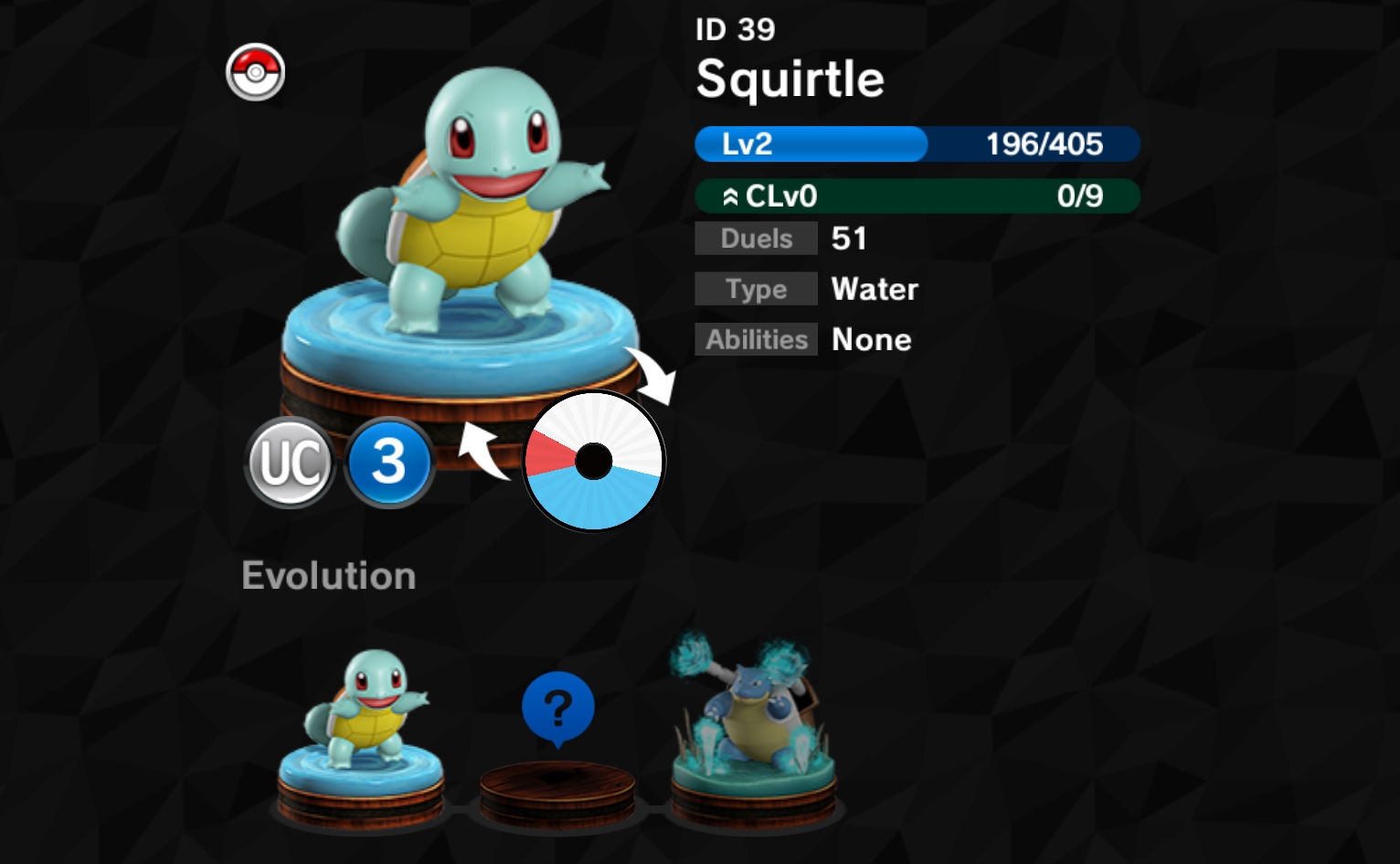 Pokemon Duel does something that might catch fans of the TCG off-guard, which is that it allows you to play Pokemon of different stages without evolving them first. Staying with our Pikachu example, if you have Pikachu and Raichu figures, you can put either or both in your deck, and you can put Raichu into play right away if you want.

However, there’s an advantage to starting out with a less evolved form. If you decide to evolve a Pokemon from an earlier stage, it receives bonuses to its attacks: +10 damage to normal (white) and gold attacks and an extra star to purple attacks. Those bonuses can add up and swing the momentum in any duel.

For instance, the uncommon version of Raichu normally has Thunder Jolt doing 40 damage and Thunder for 100. If you evolve Raichu from Pikachu during play, those values go up to 50 and 110 damage respectively.

There’s another consideration that may also tip you toward evolution. More powerful Pokemon are often, though not always, slower than their less powerful counterparts, moving less spaces on the board in one turn. Thus, it might make sense to start with a basic form to get it closer to the goal before evolving to help with the final victory push.

How do you do that? Glad you asked …

How to Evolve Pokemon During Duels

Evolving during a duel takes action on the part of your Pokemon. Specifically, you need to knock out or move an opponent’s Pokemon to have a chance to evolve. Once you do, you’ll be prompted with a pop-up window that looks like this: 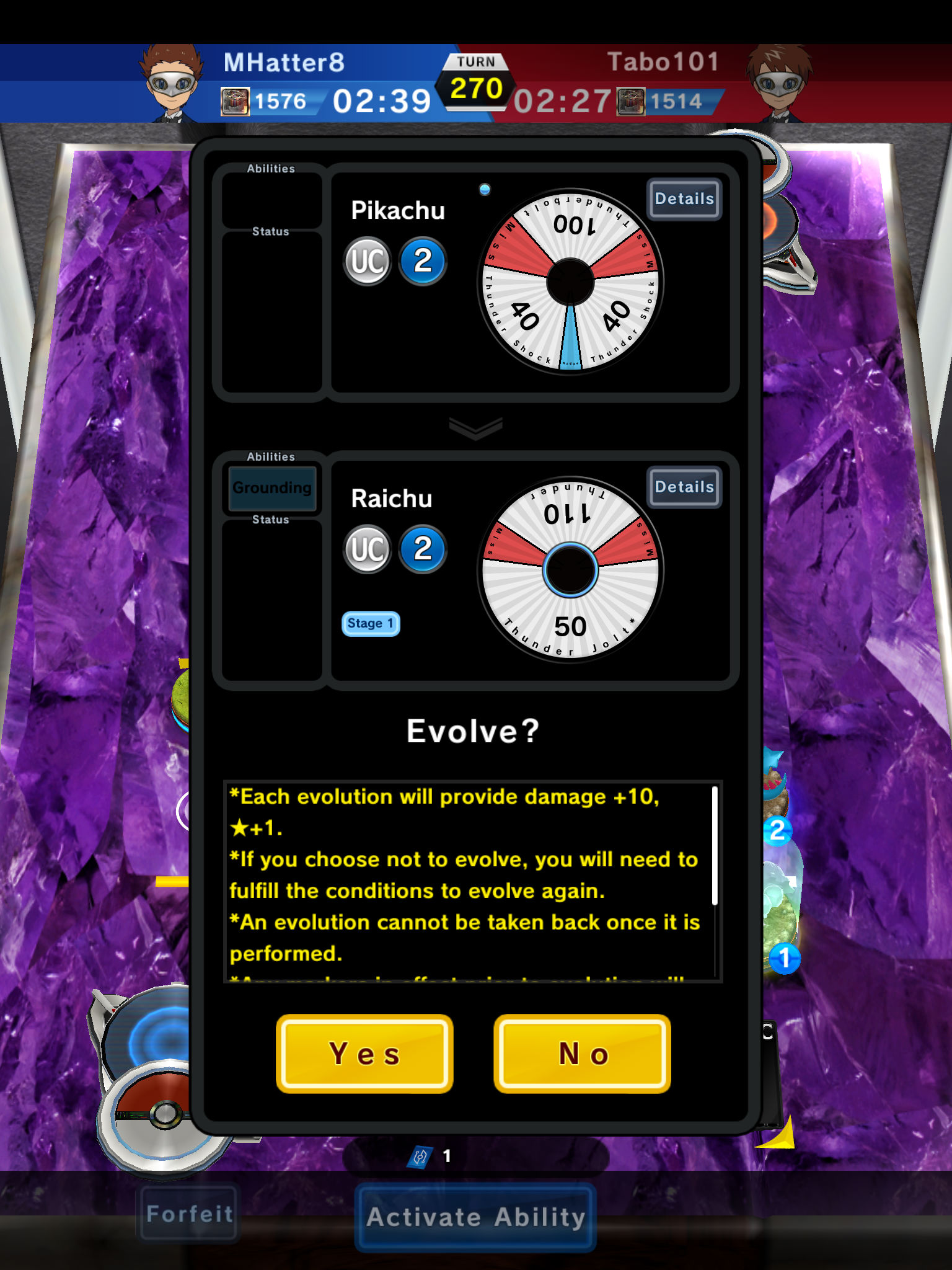 If you choose not to evolve, you’ll need to knock out or move another enemy Pokemon to get another opportunity. There are arguments for staying in a less evolved form (one of which we discussed above), but generally speaking, you’ll want to take the chance when it’s presented.

None of this matters if you don’t have your deck set up properly to take advantage of evolution, which gives us one last segue.

How to Set Evolutions for Your Pokemon Figures

The tutorial explains this using the Rattata and Raticate figures, but you might miss it so it’s worth going over again. You’ll first need to select the ‘Decks’ icon from the main menu’s bottom navigation, then tap the ‘Edit Figures’ button when you have a deck that you’d like to modify. 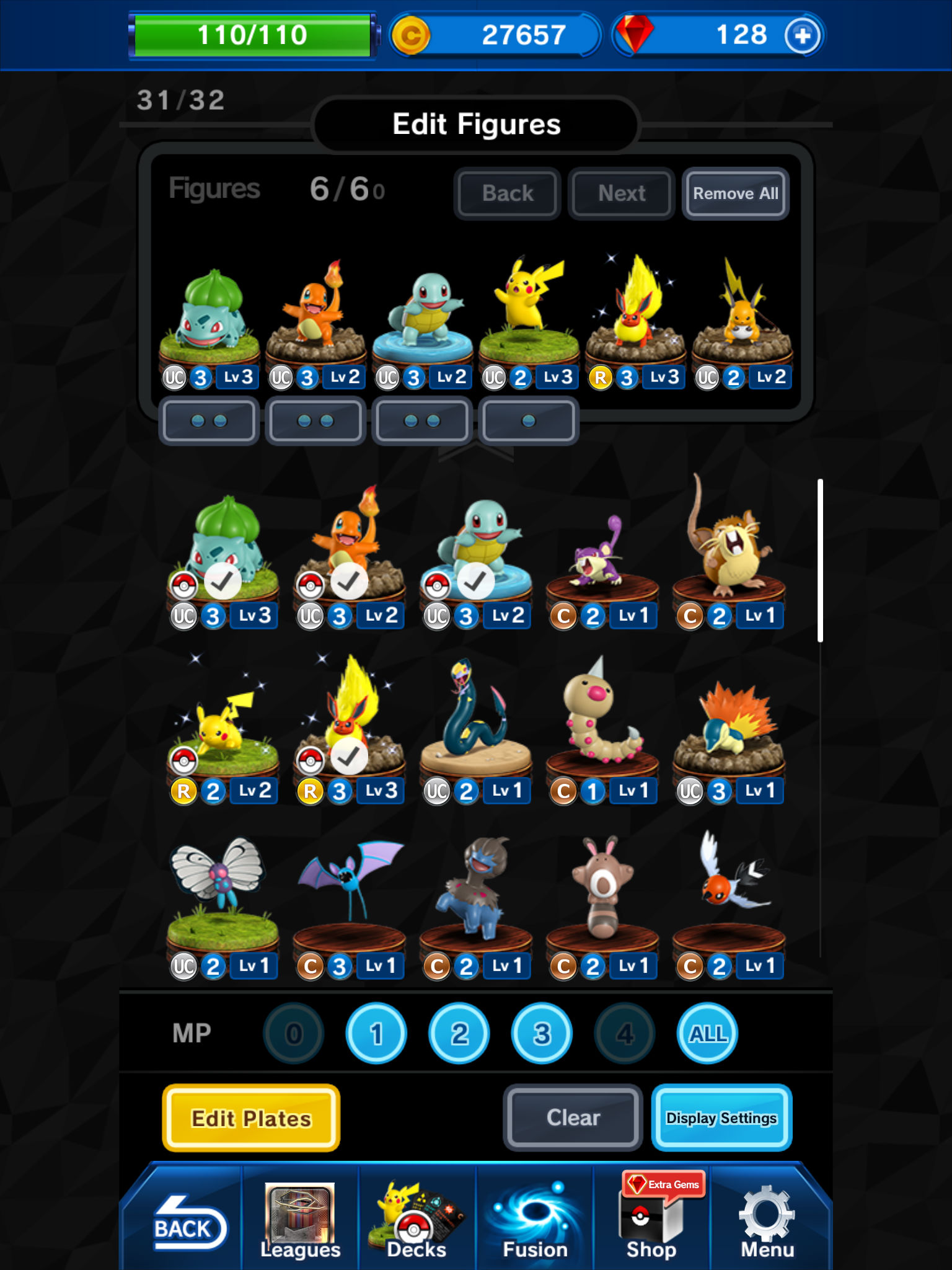 See those dots under certain Pokemon? That means they can be used as part of an evolution chain, and if you tap on them, it’ll take you to the next screen.

If you have the correct Pokemon figures, you’ll be able to tap on one to become the other’s evolution, like so: 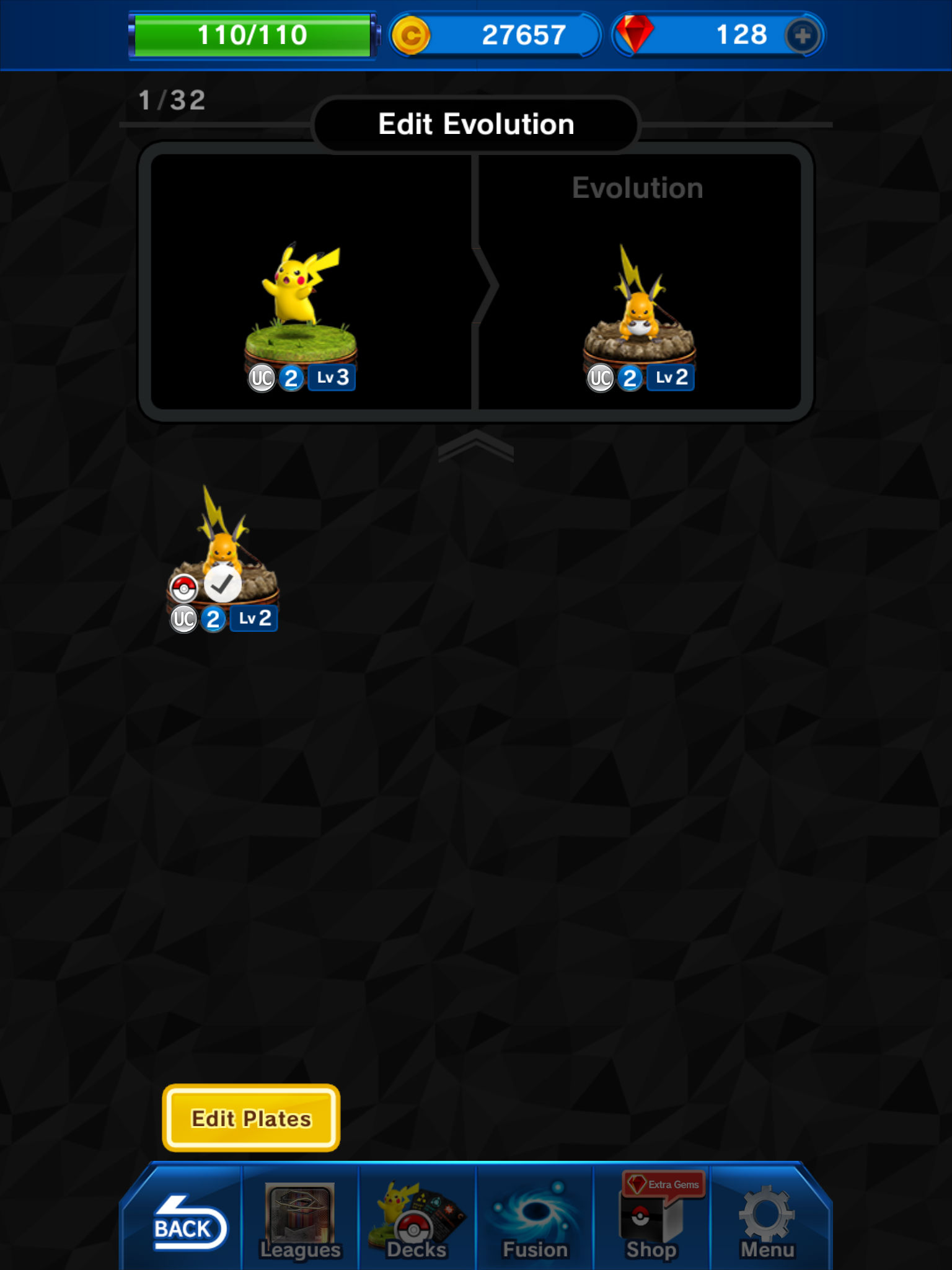 Here’s the most important thing to remember: higher stage Pokemon can only be set to be the evolution for one Pokemon figure in one deck at a time. This is different from the TCG, in particular, when a Raichu can evolve from any Pikachu card you might own.

Not so in Pokemon Duel, so if you have two Pikachu figures and want them both to evolve, you’ll need two Raichus.

There are many, many resources out there on the internets to teach you more about which Pokemon can evolve and what they become, so study up if you’re uncertain. Within Pokemon Duel, you can tap and hold on any figure in your collection for more info, which includes possible evolutions. 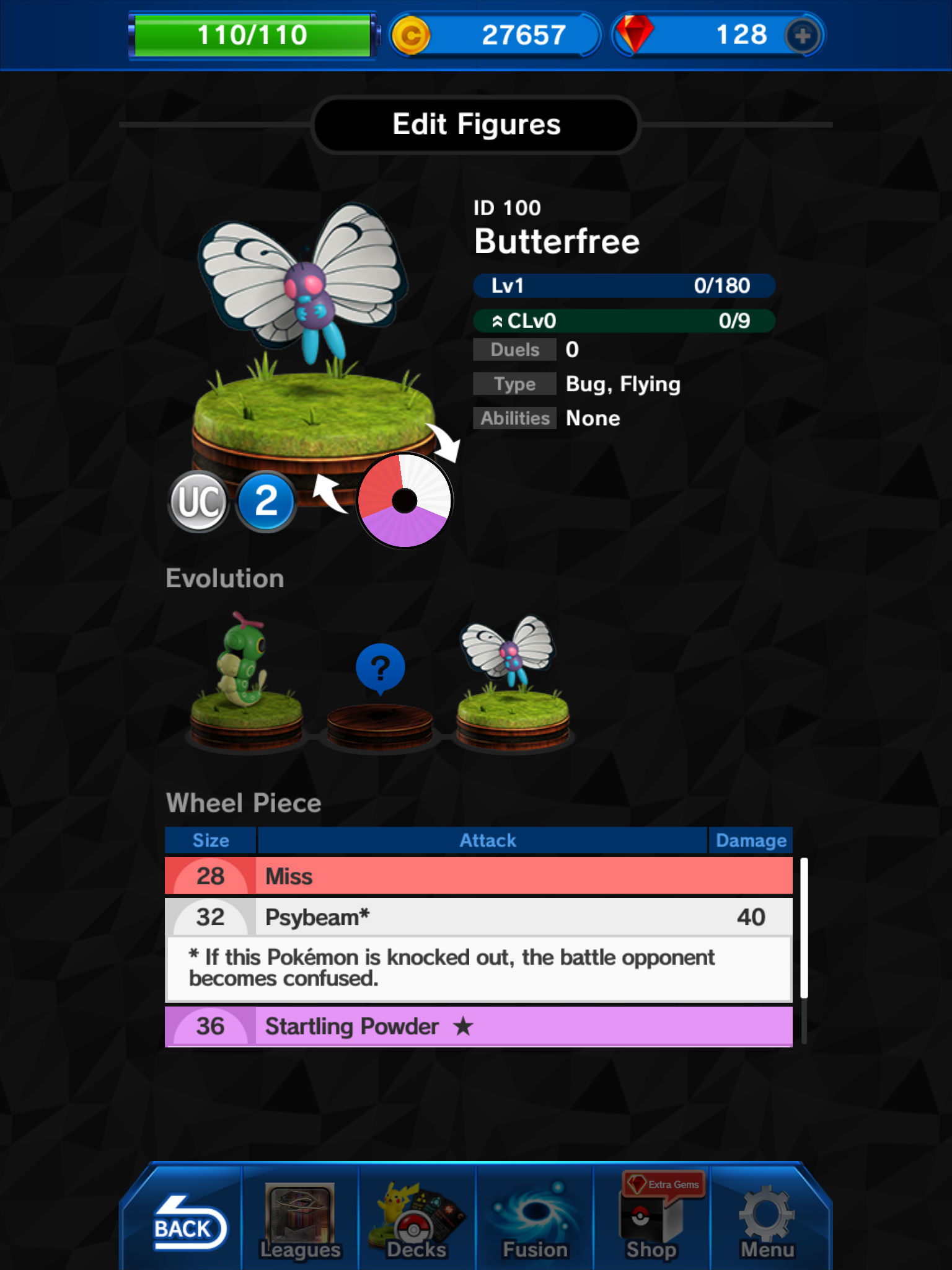 Now you know everything you need to harness the power of evolution, so best of luck in all your duels!

How to Get More Coins in Pokemon Duel