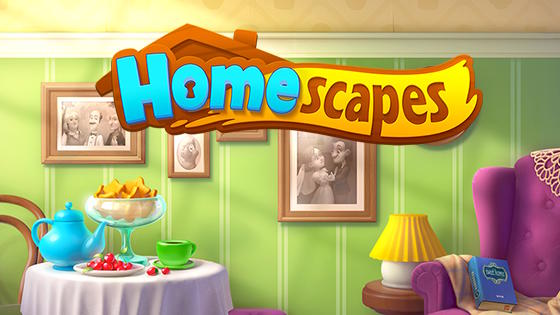 Homescapes is the latest match-3-slash-simulation builder from Playrix. Following very closely in the footsteps of its predecessor, Gardenscapes, Homescapes puts players in charge of renovating a dilapidated house through a series of tasks accomplished by playing match-3 puzzle stages. Our dear butler friend Austin is back, bursting with ideas to fix up his childhood home to prevent his parents from selling it.

If you’ve played Gardenscapes: New Acres, Homescapes will be extremely familiar: the core gameplay is almost identical, with a few small changes to the obstacles you’ll face and power-ups you’ll earn. Whether you’re entirely new to the –scapes series or a veteran stuck on a tough level, the tips below should come in handy. 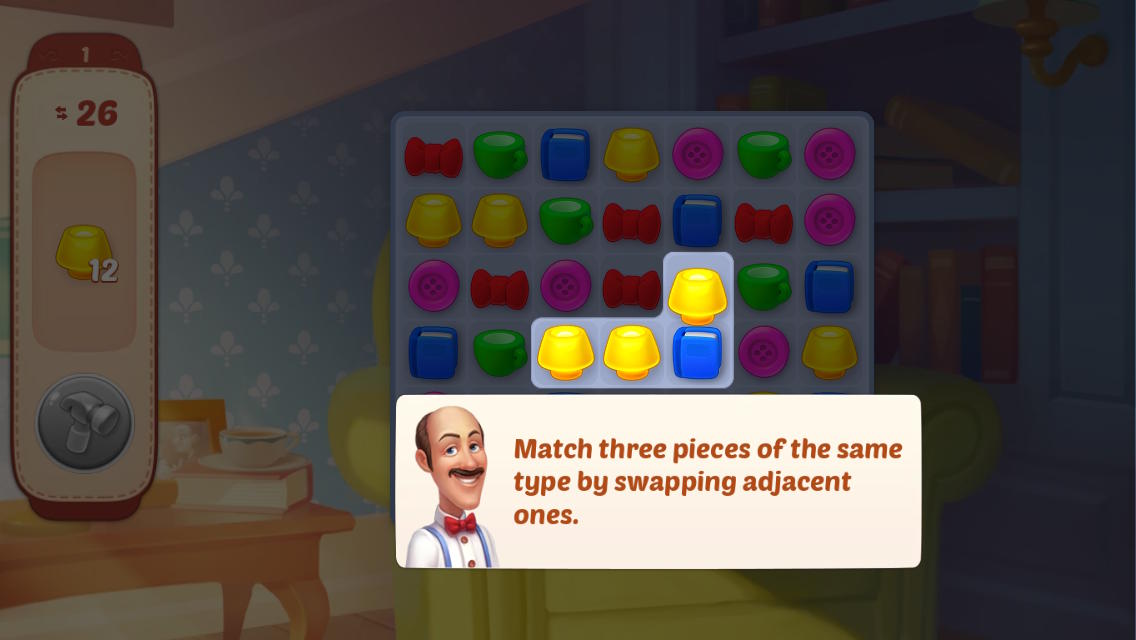 Homescapes is a level-based match-3 game. Unlike other match-3s that use a map and allow you to replay past levels, only the current stage in Homescapes is available. Each time you complete a stage, you’ll earn one star and unlock the next level.

Stars are used to help Austin rebuild his parents’ home and progress the story. You’ll be given tasks—like ‘put up wallpaper’ or ‘fix the stairs’—that cost stars to complete. You then spend the stars you earned playing the match-3 levels to fulfill Austin’s home renovation requests.

While you have to play the match-3 levels to complete the renovation tasks, the opposite is not true. You could save up stars and never do any of the jobs Austin asks of you while only playing through the stages, but part of the fun of Homescapes is rebuilding the house and designing it the way you want. 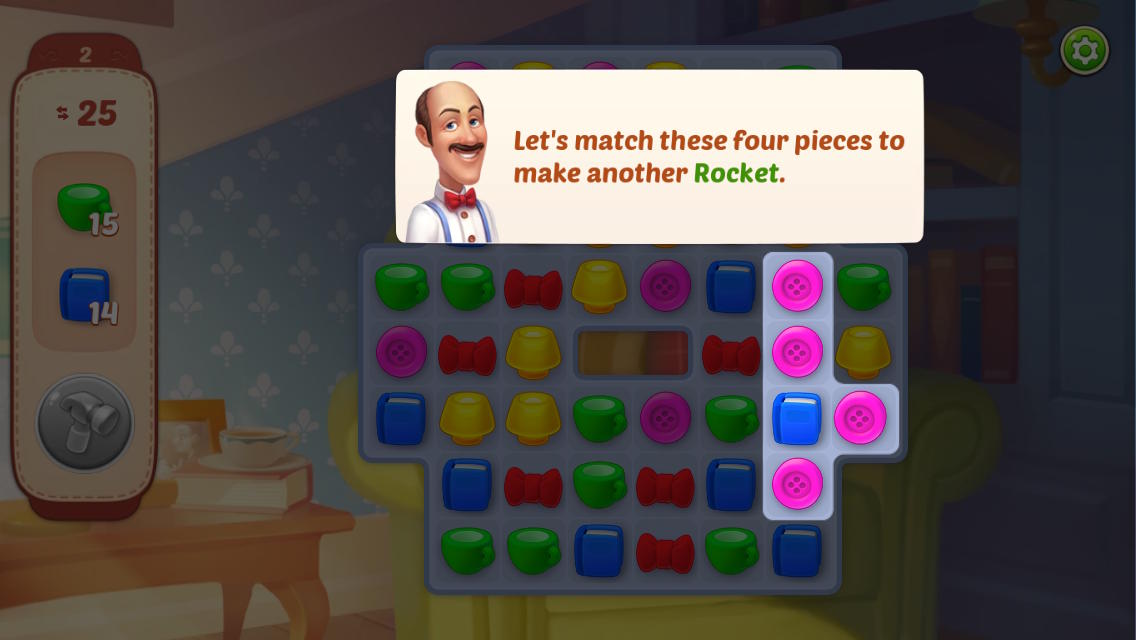 As in Gardenscapes, matching four or more tiles at once during the match-3 levels will create a special power-up you can use on a later turn. This time around, the power-ups are as follows: 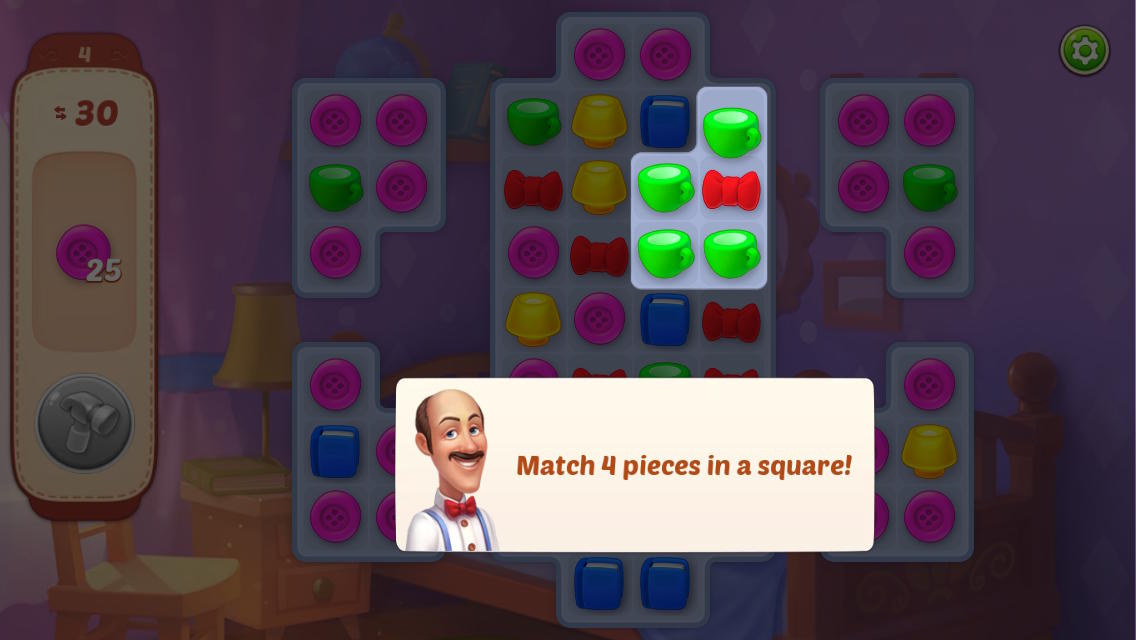 For all power-ups, if they strike tiles that require more than a single match to be removed—like reinforced Boxes—or act as breakable walls—like Cookies—then they will either do one damage or stop at that tile after destroying it, respectively.

Every power-up can be swapped with another power-up for a stronger ability: match a Rocket or Bomb with a Paper Plane and the Plane will carry the explosive to its final destination and release it there, allowing you to Bomb a distant (although somewhat random) part of the board. Swap two Rockets to clear both a row and column (even if both Rockets are facing the same direction). Matching any power-up with a Rainbow Ball will unleash dozens of that power-up all over the board.

Unlike Gardenscapes, there is no special power-up earned by setting off explosions. But the Rainbow Ball and Paper Plane make up for this with their abilities.

Focus on the Task at Hand 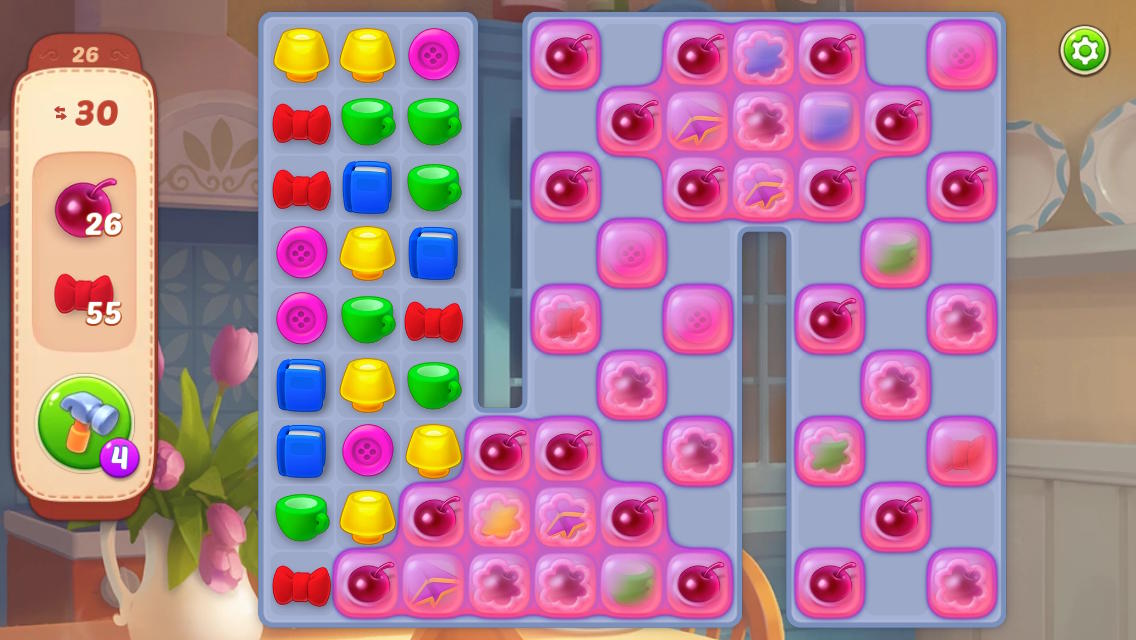 Every puzzle level in Homescapes will have a specific victory condition. This usually involves collecting or removing a certain type and amount of tiles. Early stages will feature a lot of “collect X number of Y tile” goals, while as you progress you’ll uncover challenges that include laying Carpet across the entire board, removing Cherries from inside jelly, breaking apart Cookies, and plenty more.

Often, stages will combine obstacles even if the victory condition doesn’t require you to clear all types. For instance, a stage with a goal of collecting Cherries might have Boxes blocking some of those Cherries.

Focus on the actual stage goal and don’t get distracted trying to clear items you don’t need to. If there are Boxes that aren’t in your way, don’t waste turns getting rid of them. Keep in mind that certain power-ups will allow you to reach blocked off tiles, so try using a Paper Plane instead of multiple turns clearing a few Boxes.

If the win condition involves both removing items and collecting a certain number of a color tile type—such as removing Boxes and collecting green teacups—focus on the removing part. Usually over the course of completing that task you will collect most of the base tiles you need for the second goal. 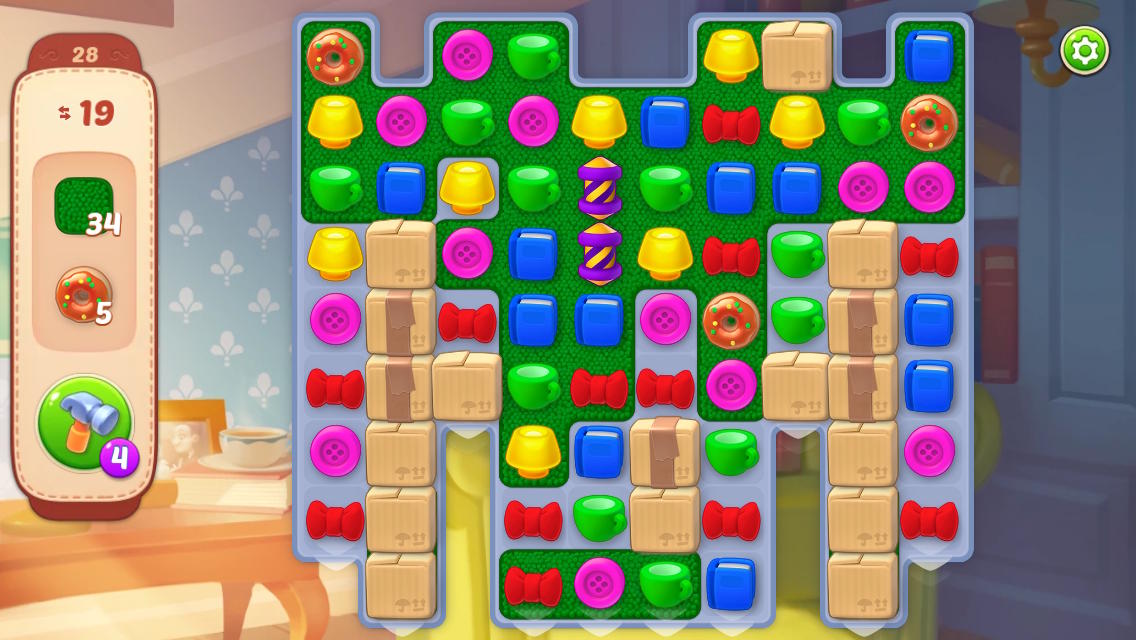 There are a wide variety of tiles in Homescapes (and we’re still uncovering new ones as we play), many of which have their own rules for removal and interaction.

One of the more unique types is Carpet: Carpet tiles have a bumpy green background and are usually the focus of a stage’s goal. On a Carpet level, you need to spread Carpet onto every tile. You do this by matching tiles with tiles that are already on Carpet, or by swapping tiles that are currently on Carpet into a match. Simply matching next to Carpet won’t do anything: one of the tiles included in your match has to either currently be touching Carpet or have just come from Carpet.

The same is true for power-ups on these stages: if you use a Bomb that is currently on Carpet, any tiles it clears will gain Carpet. However, if you use a Bomb that is not on Carpet, it will only clear the tiles—it won’t add Carpet to them. If a Rocket crosses Carpet while clearing a row or column, any tiles it clears after it hits Carpet will become Carpeted.

Cookies and Boxes can both be removed by matching next to them. However, Boxes cannot be moved or swapped while Cookies can—you can make a match by swapping a Cookie tile with another tile. But while Boxes allow power-ups to travel through them (a Rocket that hits a Box will continue past it and break anything beyond the Box), Cookies do not (a Rocket that hits a Cookie will break the Cookie and stop).

You can move tiles into empty spaces to make matches. And on stages where tiles don’t simply fall straight down, a gust of wind will blow periodically to remind you of the direction the tiles move. 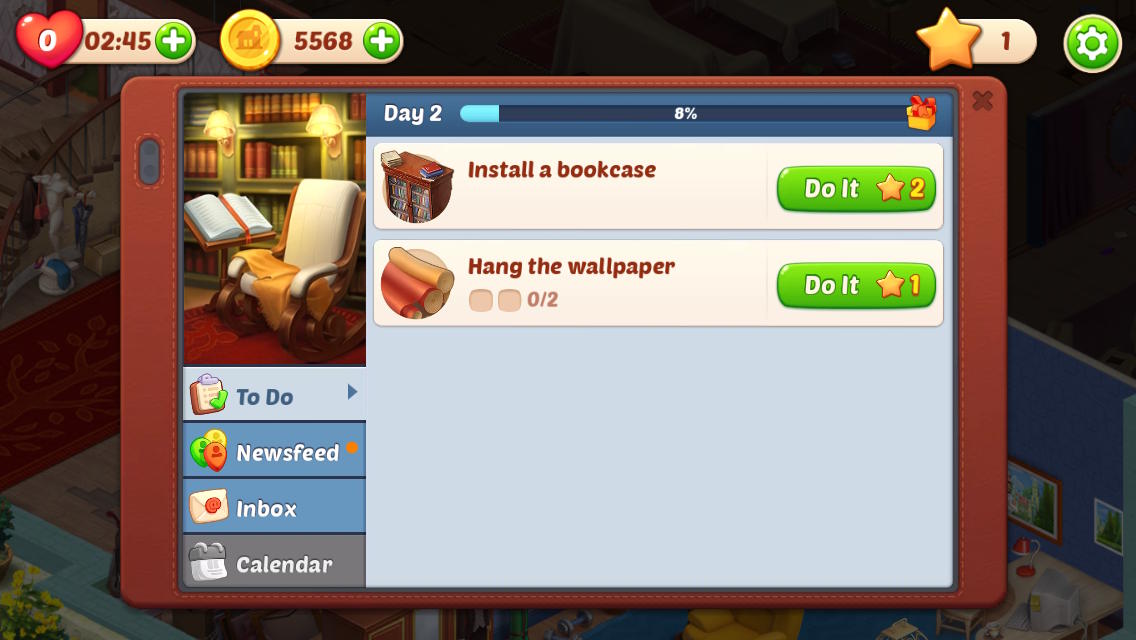 When you’re not playing the match-3 levels and earning stars, you can spend those stars to complete house-related tasks with Austin. Tap the bottom-left checkmark menu to open your tablet and see your To-Do List. As the story progresses, you’ll have multiple assignments on this list, some of which cost more stars than others. You never have to complete a task to unlock new puzzle stages, but finishing a day—denoted by the percentage of tasks you’ve completed at the top of this tab—will award you bonus prizes like coins and power-up Boosters.

Unlike in Gardenscapes, you do not recover your stamina by completing a day, so there’s no reason to hold off on doing so. There’s also currently no daily wheel for earning bonuses, so these end of day rewards are very valuable. Coins are still handed out in very limited quantities at the end of stages—you’ll rarely earn more than 70 coins for even a very good game—so we recommend saving your money unless there’s a stage you’re simply tired of attempting. 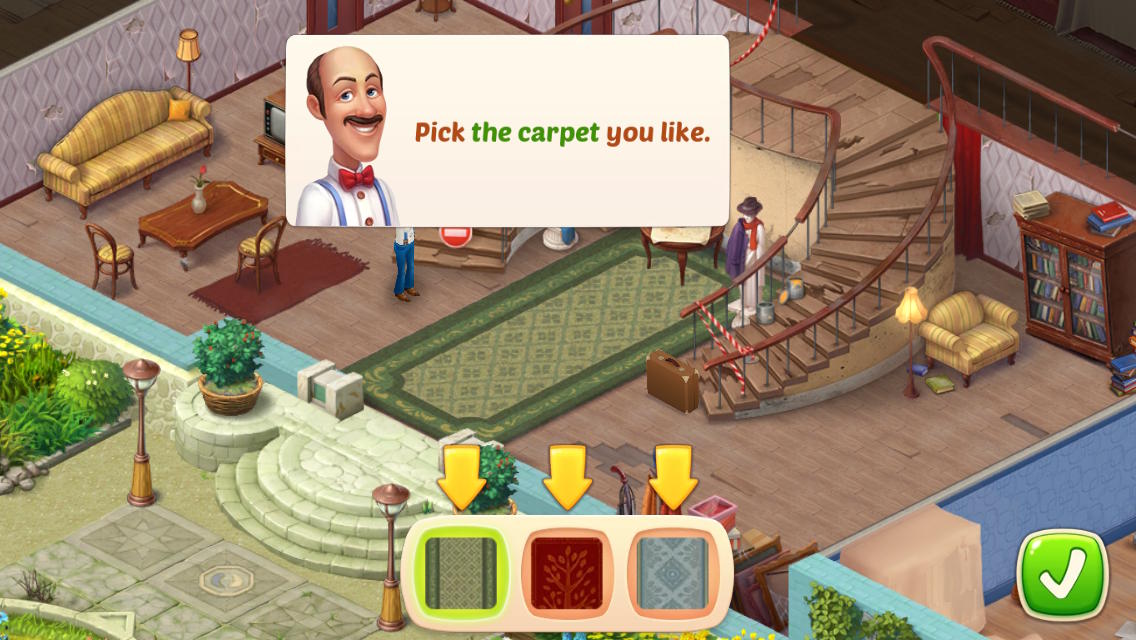 You can go back and edit any furniture or decorations you’ve fixed and change the style to one of the other options, although you’ll have to pay a small amount of coins to unlock other styles. Simply tap and hold on the item you want to change until the style menu pops up. While this menu is up, you can tap any other editable objects to change them as well.

You can change your name or any animals’ names by tapping the gear icon in the upper right and selecting “Change Name.”

Tapping objects throughout the mansion will elicit a response from Austin: he’ll often have some commentary to share or he’ll actively engage with the furniture, like sitting in a chair or dusting a shelf. 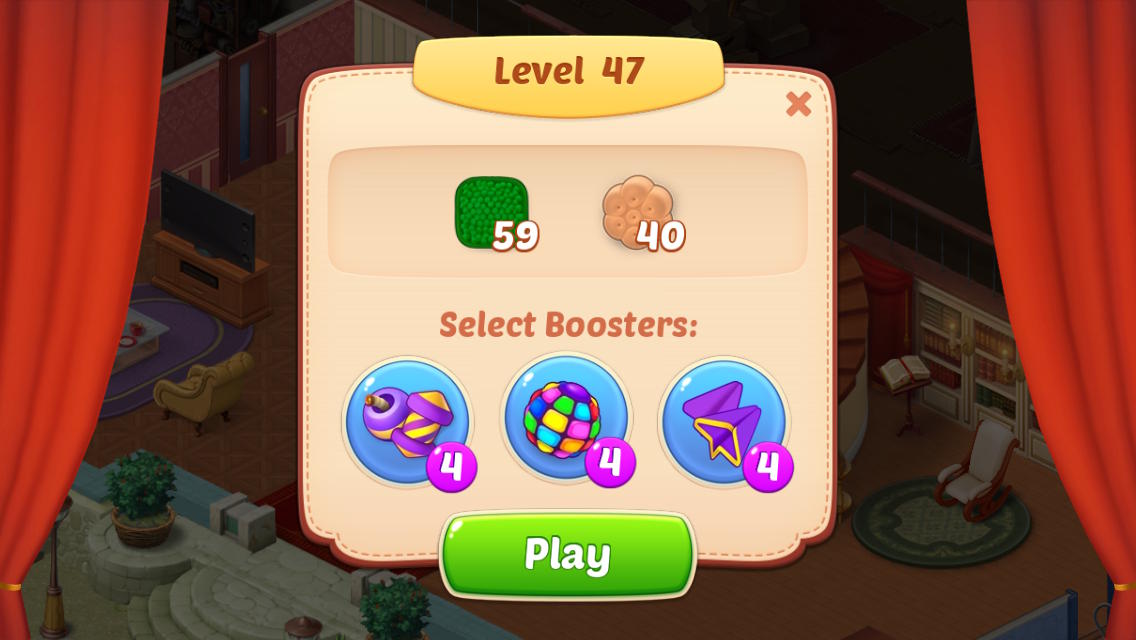 As you complete stages, you’ll unlock Boosters that you can take into levels with you.

The Hammer unlocks after you finish level 8. This Booster is always active and allows you to remove a single tile of your choosing from the board without spending a turn.

The Bomb + Rocket Booster becomes available after level 14. If you choose this when starting a level, you’ll receive a randomly placed Bomb and Rocket power-up at the beginning of the stage.

The final Booster, the Double Paper Plane, can be selected after level 20 and doubles all Paper Planes earned while playing that stage.

Like coins, Boosters are extremely hard to come by, so we recommend saving them until absolutely necessary. On the first stage after you unlock each Booster, they will be auto-selected as part of the tutorial: you can deselect them before starting the stage and prevent wasting a Booster on lower levels. Also, if you fail a level numerous times, the game will sometimes offer a pop-up that says “Try this Booster.” If you choose Yes, it merely selects that Booster before starting again. It doesn’t award you an extra Booster—it’s just recommending a specific one that might come in handy.

My NBA 2K18: A Quick Guide to the Playoffs