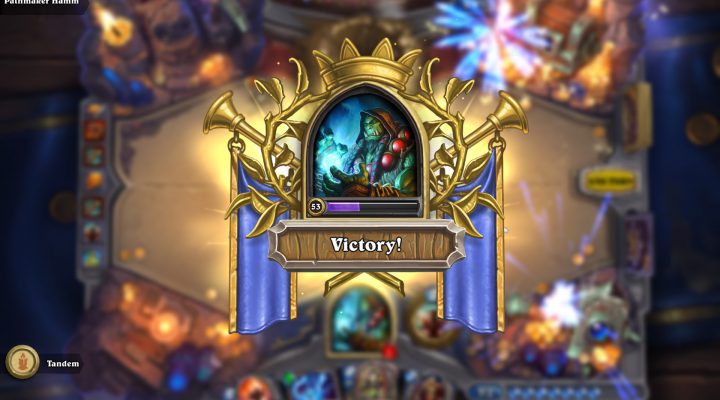 Hearthstone’s newest single player mode in Kobolds and Catacombs, Dungeon Run, pits you against a total of eight single-player opponents in a row pulled from a large pool, with the challenge level, health, and deck size increasing as you progress. You’ll start with a teeny-tiny deck with set minions, but after each victory, you’ll get to choose new passive buffs for your deck or debuffs for your enemies’ decks, special “treasure” cards to add to your deck, and new, thematic cards to build a bigger deck with. Each time, you’ll be given three options to choose from, meaning the path through the dungeon is a mix of RNG and smart, strategic choices.

As Kobolds and Catacombs progresses, I’ll bring you overviews of what to expect from each Hearthstone class during a typical Dungeon run, including what Treasures and Passives to choose and what deck builds are better or worse for each Dungeon Run. This week, I want to focus on my personal favorite class, the Shaman. Let’s go!

Your basic Shaman deck for the Dungeon Run starts with the following cards:

Yup! That’s all you get. You have three elementals to start with, one weapon, three spells, and one Murloc. Three of these are Overload cards. That’s what you’ll be building your deck off of later, so it’s important to keep these in mind when choosing buckets. You’re set up nicely already for either an Elemental, Overload, or Spell-based deck, but you’ll need some help to properly work through a Murloc-based deck or a Totem one. They’re still viable, you just won’t have as many tools early on. 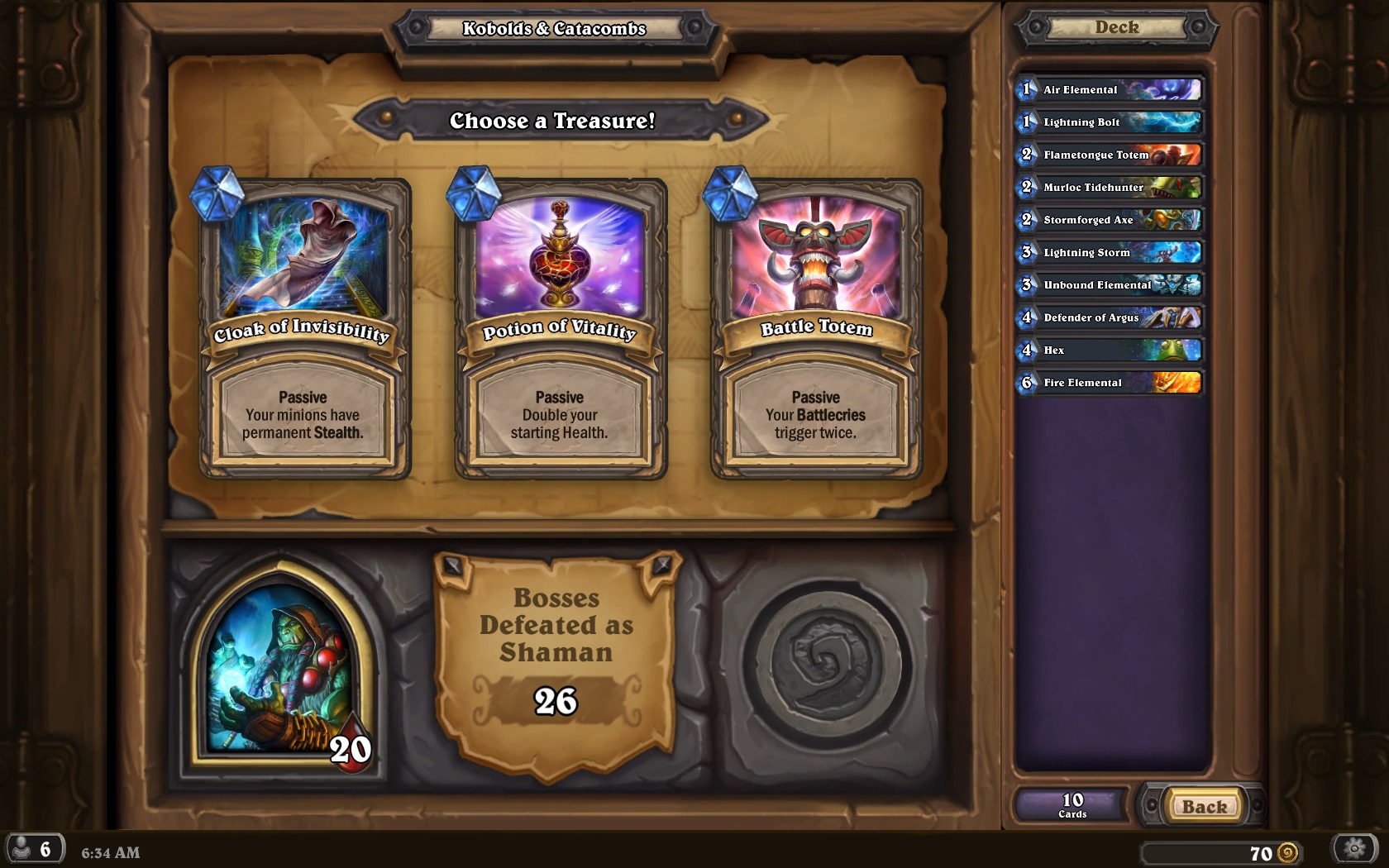 You’ll receive a Treasure or a Passive Treasure pick after the 1st, 3rd, 5th, and 7th victories of each Dungeon Run. Treasures join your deck as playable cards, and Passive buffs or debuffs will affect your or your opponent’s decks, respectively, for the remainder of the run. Some are universally very good, while some are situationally good depending on what else you have. Some are just terrible.

Specifically for Shamans, the Battle Totem and Captured Flag are great passive buffs. The former triggers Battlecries twice and is fabulous for Jade decks or Battlecriers, and the latter just gives a nice passive boost that can be enhanced further via the Mistcaller, and helps low-cost minion decks. I’m also a huge fan of the Crystal Gem, as early Dungeon Run Shaman tends to be Overload-heavy and can benefit from the extra mana crystal. Khadgar’s Scrying Orb and Robe of the Magi are strong for spell-based decks. Cloak of Invisibility has been recommended for Shaman by others, but I find it difficult to use unless I’m playing very aggressively, as it encourages the enemy to go face and essentially neutralizes taunt cards. Stay away from Justicar’s Ring, Scepter of Summoning, and Glyph of Warding. The latter especially looks tempting but does very little in practice with the way these decks are designed.

For Treasure Cards, Boots of Haste are always great. Bag of Stuffing and Wondrous Wand can also be good for card draw, but make sure you keep enough low-cost cards flowing so you can balance them out and keep from destroying cards. Portable Forge is another excellent choice, though again, be wary that it may pull Aluneth and give slow decks the same trouble. I like Party Portal for the spell-heavy Shaman decks, and Shifting Hourglass is great for regaining control in later runs. The Rod of Roasting is a joke. Don’t pick it.

Note that the Blade and Hilt of Quel’Delar are mostly useless on their own (the Blade is an okay-ish weapon), but if you manage to pick them both up in the same run, you’ll get Quel’Delar, an excellent board-clearing weapon. Shoot for it at your own risk. 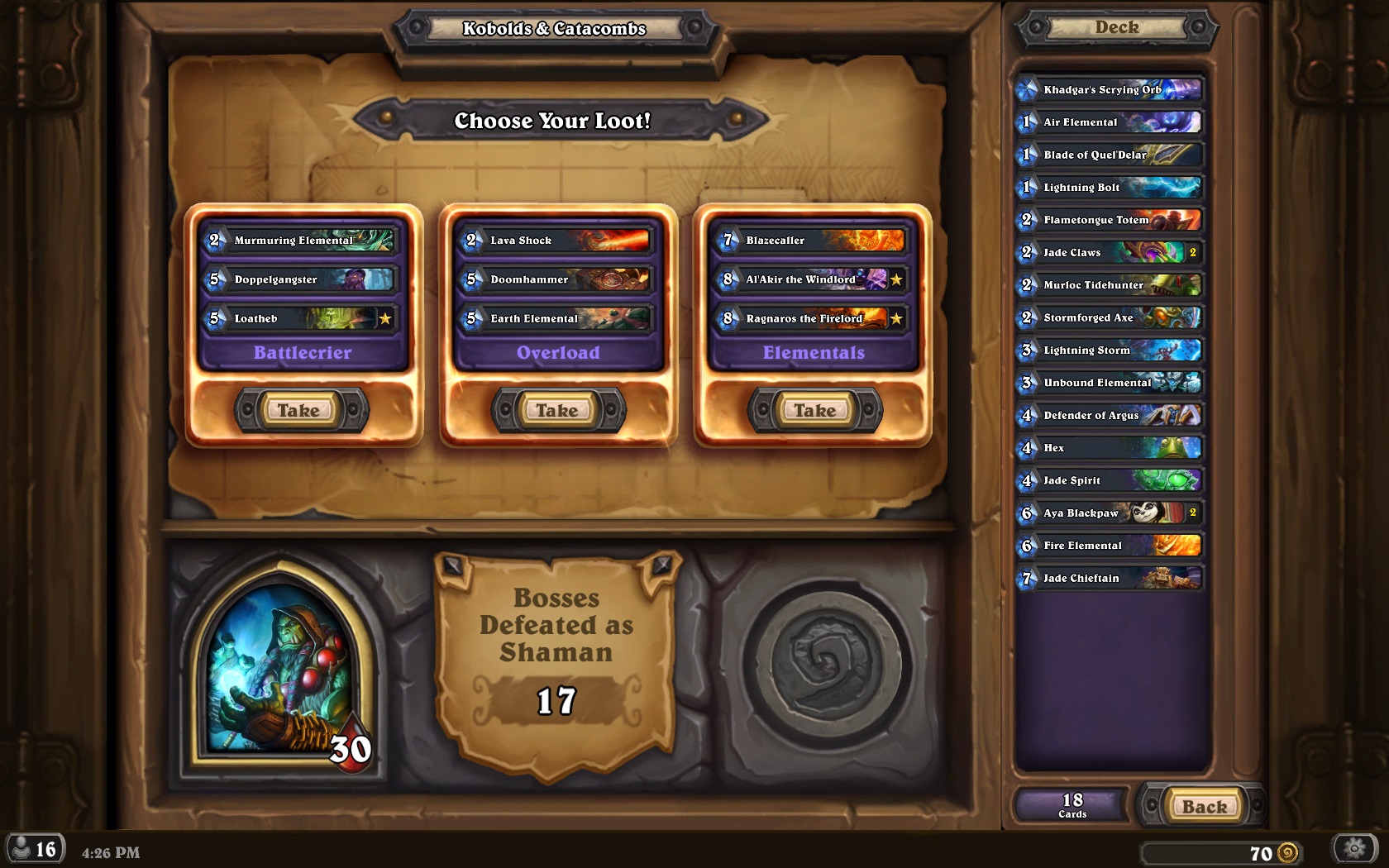 In general, my recommendation is usually to play what you know. If you’re comfortable with a certain deck style, you’re more likely to play it well and get farther in the run. That said, some of the buckets are bad, and even the ones that are good can sometimes lead to some serious deck imbalance. Throughout your run, keep an eye on the overall mana cost balance in your hand. Even if you’re doing great about picking Jade every time, for example, if all you’re getting are Aya Blackpaws and Jade Chieftains, your early game tempo will end up terrible and you won’t survive long enough to bust out those golems.

In general, though, the three most viable builds to proceed with are Destruction, Jade, and Elemental. Battlecrier is also great for the most part. Destruction is spell and overload-heavy, and is best used with Treasures that augment it. Elemental is a good all-around choice, and Jade shines either on its own or as a supplement to other decks, since it seemingly has everything: extra minions for your mana, spells, overload, battlecry, deathrattle, the whole she-bang!

Avoid Frost and Restoration if possible. They can, in a pinch, supplement other decks well, but they’re best selected by those who know their shaman deck well enough to pick cards with good synergy with what’s already there.

Best of luck with your Shaman runs, and we’ll be back with more guides to help you clear Dungeon Run with every class!