Growtopia Beginner’s Guide: How to Survive the Sandbox 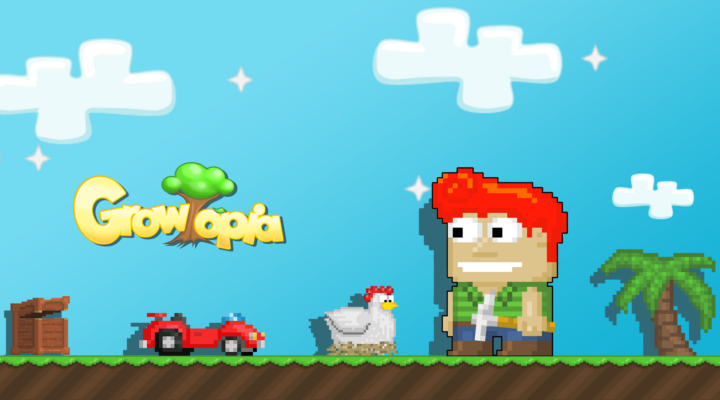 Growtopia is a huge sandbox MMO that shares traits in common with countless other accessible, massively multiplayer games.

But it’s also unique, with its own highly accessible 2D take on the genre and an emphasis on creativity and accessibility. Growtopia’s slogan is Be Anyone & Create Anything, which should give you a good idea of what you’re in for.

Growtopia is essentially a limitless universe of interconnected worlds created and maintained by players.

These worlds can take any form imaginable, from huge pixel-art designs to replicas of famous landmarks to higgledy-piggledy playgrounds.

Most of the gameplay involves working on your own world and interacting with other players by visiting their worlds, but you can also complete NPC quests for additional rewards.

To get started, you need to create a world with a unique account name. At this stage you can also create a GrowID, an optional extra step that lets you backup your world and play on multiple devices without losing your progress.

And you’re in. You can move your avatar left and right, and punch blocks to make them disappear.

Sometimes punching a block just leaves an empty space, but often it disappears to reveal a seed. Walking over the seeds adds them to your inventory, after which you can plant them to make trees.

Once a tree is grown, you can punch it to create a new block, more seeds, or some gems. Then you can use the blocks you’ve gathered to lay down new terrain wherever you like.

How do you place blocks? By punching.

That’s the core gameplay loop at its simplest level: punch to destroy blocks and reveal seeds, plant seeds, punch trees to create even more goodies, and place blocks to create the world of your dreams.

But it gets more complicated. For one thing, you can splice seeds to create new trees, introducing a crafting element to the whole enterprise. And you can equip items to increase your punching power

Trees come in several varieties, and don’t behave very much like real trees at all.

For example, you can grow a door tree, which produces fully formed doors that you can harvest, or a sign tree, which makes signs.

Tapping punch over a sign lets you write your own personal greeting on it, with several text colors available.

Doing the same over a door, meanwhile, lets you not only label a door but create a portal between two doors, to help you navigate your world more quickly.

Your world in Growtopia contains a white door, which is how other players get into it. But sometimes you don’t want them to. That’s why you need a lock.

These cost gems, and they come in several different types and sizes. To use a lock, just place it directly above the white door in your world, place a door beside it, place blocks all around both doors, and then link the internal door to another one outside following the steps above, making sure to uncheck the box that says, “Is open to the public”.

Now you’re safe. Nobody can get into your world unless you want them to, so you can create in privacy.

As with everything in Growtopia, farming is a simple and accessible activity. It allows you to multiply your seeds and blocks by hitting objects multiple times – as long as those objects are farmable.

Ideally your farm should consist of several rows of dirt or wood with trees growing on them. As you break down these trees you’ll gain more seeds and other resources than you spent on planting them, giving you a tidy profit every time you harvest.

Like any self-respecting farmer, you’ll want to trade your goods. This involves simply finding a player who’s selling what you need and thrashing out a deal.

Assuming you and your trading partner are happy with the deal, you can progress by both tapping Accept and then Do The Trade! on the confirmation screen.

The confirmation screen is an important step in the process, as this is where you can ensure that your trading partner isn’t trying to rip you off by swapping in an item that you didn’t agree to take.

Growtopia is a vast, organic universe, and it contains the full spectrum of humanity – including scammers. Not only will these scammers try to con you during trades, but they’ll try to bamboozle you into dropping valuable items by proposing “drop games”.

Don’t fall for their tricks.

There’s a lot more to discover in the sprawling multiverse of Growtopia, but these tips should get you off to a solid start.

Check out Growtopia on both iOS and Android.