Fortnite Week 9 challenges: Where to find the Taco Shops 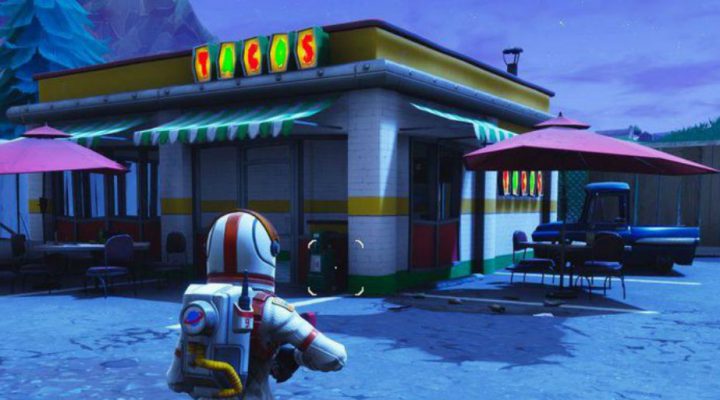 There’s no real time to stop and have a bite during a game of Fortnite, but one of the Week 9 challenges is going to have you making a virtual run for the border. That’s because everyone’s favorite battle royale game (alright, not everyone’s favorite, but certainly a ton of people) wants you to visit three different Taco Shops.

In contrast to some of the previous weekly challenges, this one can be a bit tricky because you have to hit all three Taco Shops in a single match, which means not just finding them but also staying alive long enough to make it to two more. Add in the fact that the storm might make some of them accessible semi-quickly and you’ve got your work cut out for you — though this isn’t considered a “Hard” challenge and pays out just five Battle Stars instead of 10.

Be that as it may, we figured you might need some assistance in tracking down the Taco Shops.

Where to find the Fortnite Taco Shops

Erik Kain of Forbes has a map for all five Taco Shop locations, as well as some advice for knocking them out: Head west, young man (or woman). Since it’s imperative to move quickly and cover as little ground as possible, the three locations on the west side of the map — south of Shifty Shafts, at Tilted Towers and between Tilted Towers and Snobby Shores — are the most promising.

We’ve also found some great advice on YouTube. ProHenis has a look at what he says is the easiest way to visit Three Taco Shops.

TmarTn2 also gives us a look at how he thinks it should be done.

Can you work Tomato Town (this writer’s personal favorite Fortnite location) and Retail Row into your three Taco Shops? You can, but you’re doing things the hard way if you do. Just remember that there are only the five shops noted above. Good luck, and stay hungry, my friends, at least for this week.

How to play for free in The Sims Mobile