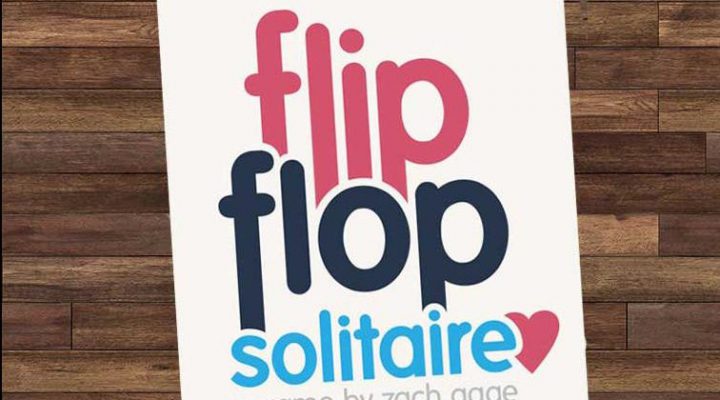 Flipflop Solitaire is the latest twist on a classic concept by developer Zach Gage. Like Sage Solitaire, which added elements of Poker to the single-player card game, Flipflop Solitaire shakes up the Spider formula by allowing players to stack cards in either ascending or descending order. The result is a game that still feels like familiar Solitaire, but with a few tricks up its sleeve. 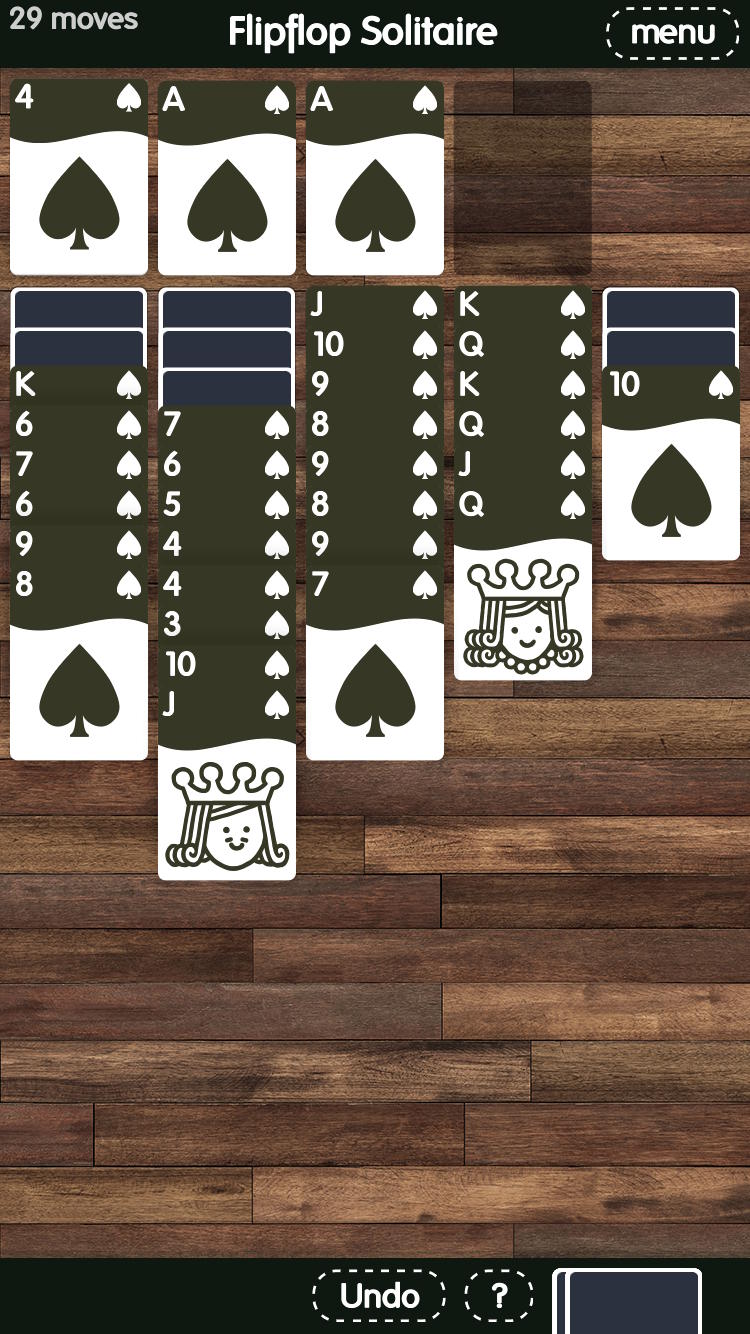 If you’re at all familiar with Solitaire, the basic Single Suit mode in Flipflop Solitaire will likely seem too easy. Because all of the cards share a suit, you’ll almost always be able to move a pile without becoming trapped. However, practicing on Single Suit will help you focus on and internalize the primary gameplay variant in Flipflop Solitaire: stacking cards in descending or ascending order.

One of the biggest challenges we encountered was simply remembering that we could stack cards from low-to-high in addition to high-to-low in harder modes. Playing through a few hands of Single Suit and focusing on this mechanic—and intentionally stacking in both directions whenever possible—helped it become an ingrained option.

Feel Free to Use the Hint Button 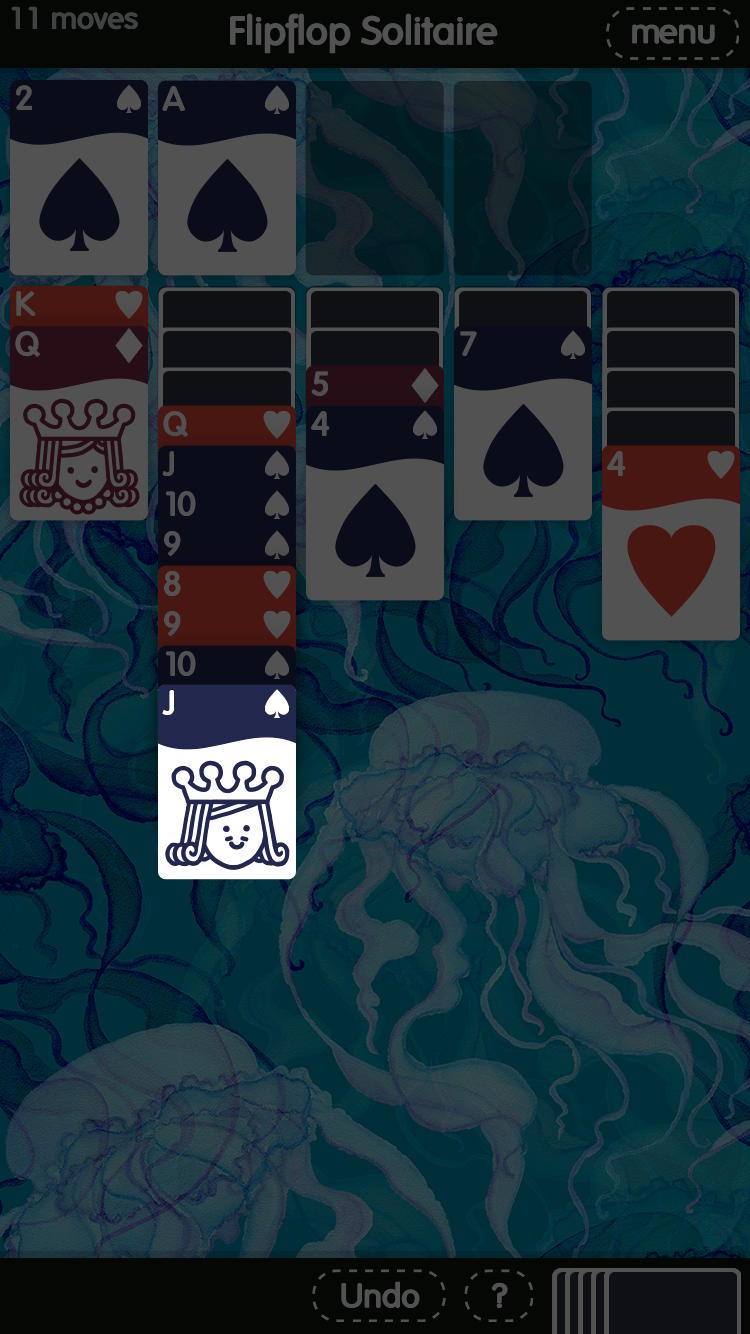 Flipflop Solitaire tracks a number of different accomplishments when you finish a game. These include the time it took to win, how many moves you used, and whether you used the undo button at all. It does not, however, track whether you used the question mark hint next to the undo option: this hint shows you all currently available moves on the board.

This hint is helpful if you only see one possible move and it’s not an ideal one, as well as a reminder of bi-directional stacking and the two face-up cards near the draw pile (it’s easy to forget these are also available). And since using the hint doesn’t impact any stat-tracking achievements, feel free to tap it as often as you’d like.

Similarly, once you use the undo button once, feel free to use it often afterwards. Games track whether it was an “undo-less” win, not how many times you used the undo total. So undoing once and undoing thirty times have the same result on your stats screen (there are a few achievements that require winning a game with fewer than 10 undos, but these are one-time unlocks). 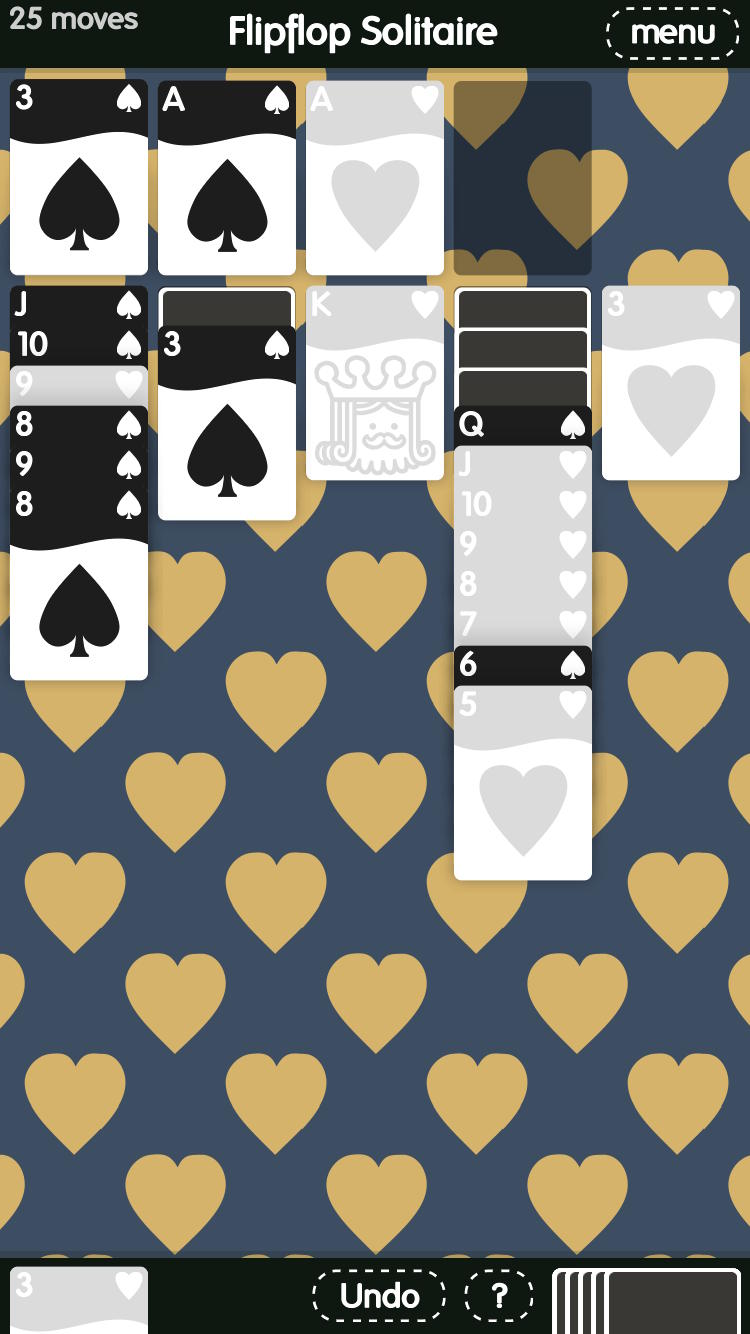 Despite Flipflop Solitaire’s unique twist on the stacking formula, the strategies you would use in standard Solitaire are still helpful here.

It’s best to focus on unblocking the face-down cards on the tableau (main play area) before drawing from the stock pile. Since Flipflop Soliatire is a variation on Spider, when you use the draw pile, cards are dealt out automatically on top of each tableau stack, blocking any piles below them. The larger a pile becomes, the harder it is to reach those face-down cards and see what they are. On top of this, you cannot move cards to a pile once it has 20 cards in it, so you’ll eventually run out of room to expand.

You want to unearth the Aces as soon as possible and get them into your foundation (the Ace through King goal slots at the top of the board). This way, you can start removing cards from the table by applying them to the foundation. If you’ve uncovered all the face-down cards and are still missing Aces, you know they’re in the draw pile and you’ll have to work through it before you can begin your remaining foundation stacks. 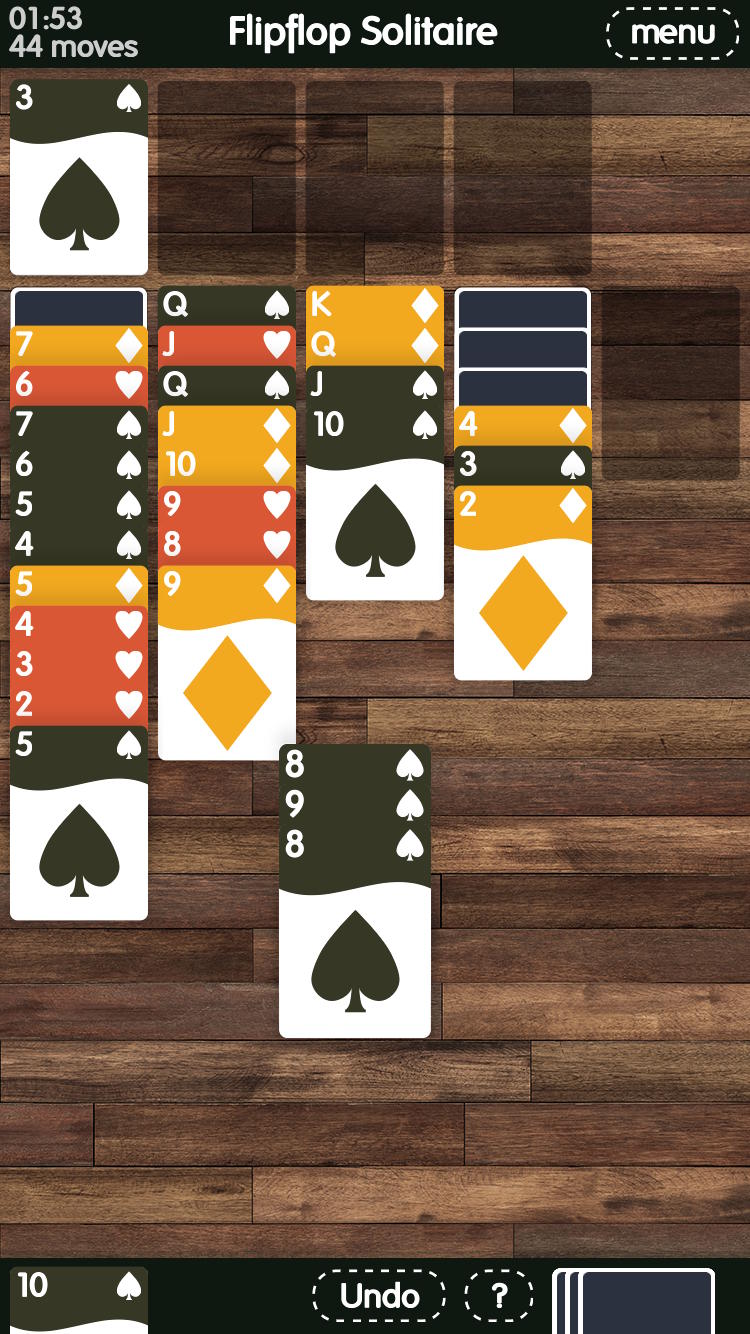 Any time you have a choice between stacking different suits together or the same suit, opt for the same suit. Since you can only move stacks when the cards share a suit (and are in either ascending or descending order), prioritizing same-suit stacks will provide a lot more freedom down the road when you need to move or rearrange piles. It also makes it much easier to play cards to the foundation if they are lined up by suit, allowing you to remove entire stacks at once.

Try to save your two free face-up cards near the draw pile until absolutely necessary. It’s always better to have fewer cards in your tableau, so keep these two off the table unless they can be used to free up a slot, or just play them to the foundation directly when possible. (E.g., if there is an Ace in one of these slots, go ahead and play it right away.) 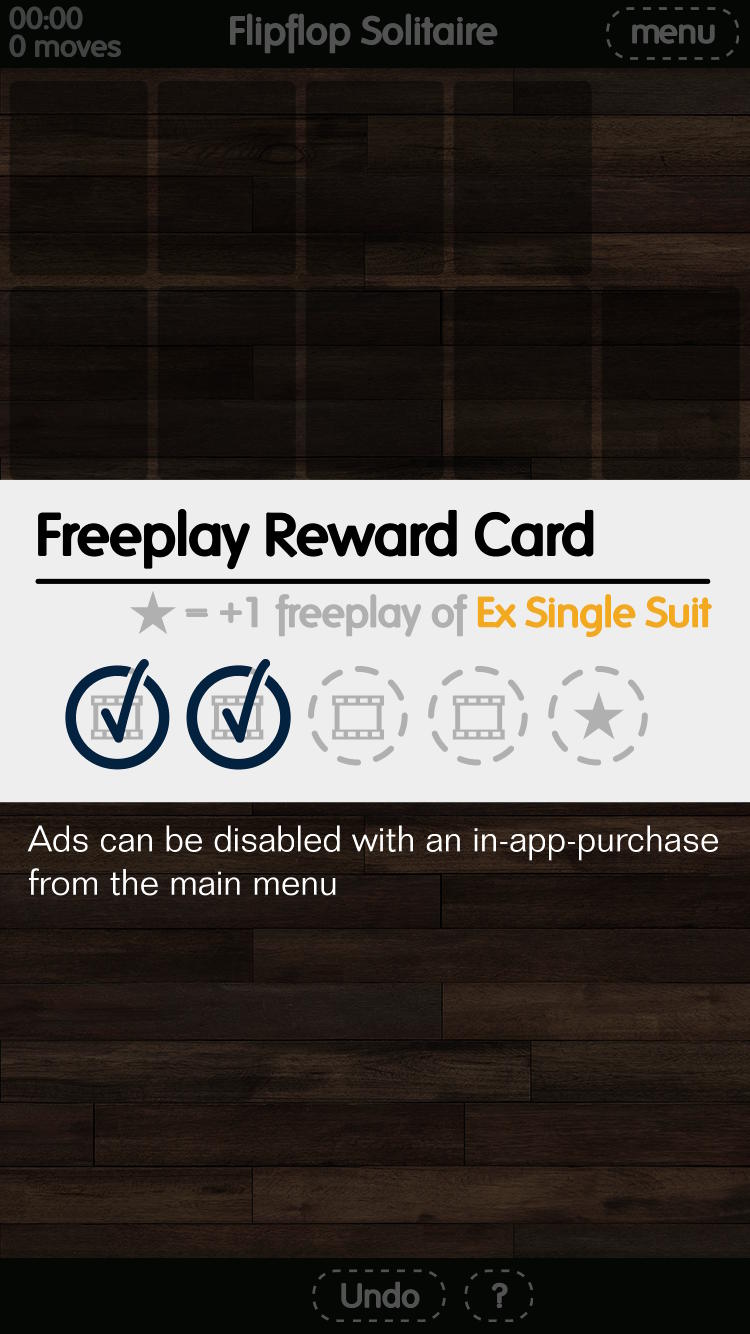 Flipflop Solitaire is free to download, and without purchasing any IAPs you can play Single Suit, Two Suit, Three Suit, and Four Suit as much as you’d like. However, Five Suit and Ex Single Suit are only available after watching ads: you have a “freeplay reward card” for each mode that requires watching five ads total before you’ll earn one play of that particular mode. Ads appear about once every three new games you play, so you’ll eventually earn a freeplay automatically as you complete games. Or, if you don’t care about your win-lose ratio, you can just enter another mode and choose “new game” repeatedly until you receive an ad and +1 to your punch card. 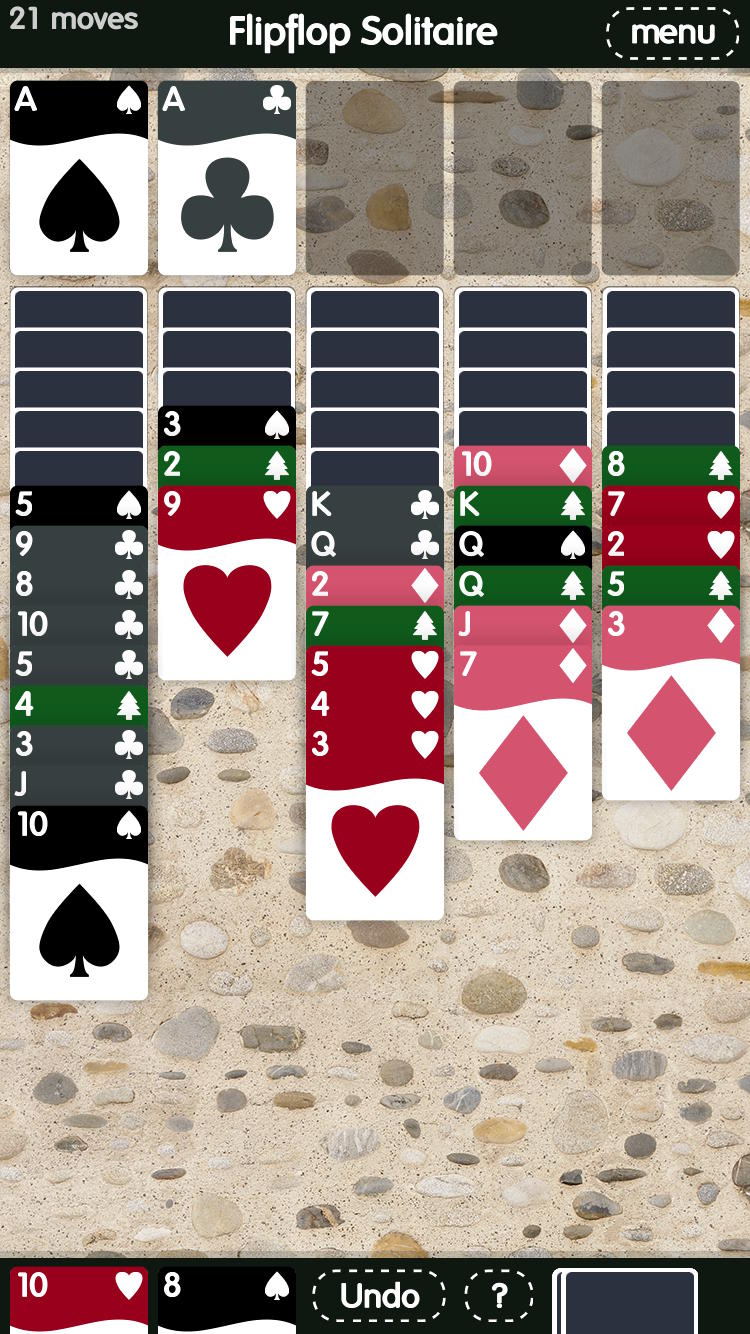 Five Suit is exactly as it sounds—five different suits, each with one set of Ace through King. It’s definitely the hardest mode in the game. Ex Single Suit adds an additional set to the standard Single Suit mode: so, instead of creating four foundation piles, you have to create five (thus, there are 13 additional cards to deal with, but of the same suit).

The $2.99 IAP unlock removes ads and the restrictions on these modes, letting you play them as much as you’d like. It also adds eleven background options that can be used in place of the default wooden boards, seven more colors for card backs (all variations on blue / gray brown), seven other colors for the card fronts, and the option to select the suit for Single Suit modes (instead of always playing with Spades). All of the color customizations can be mixed and matched freely.

How Not to Suck at South Park: Phone Destroyer PvP