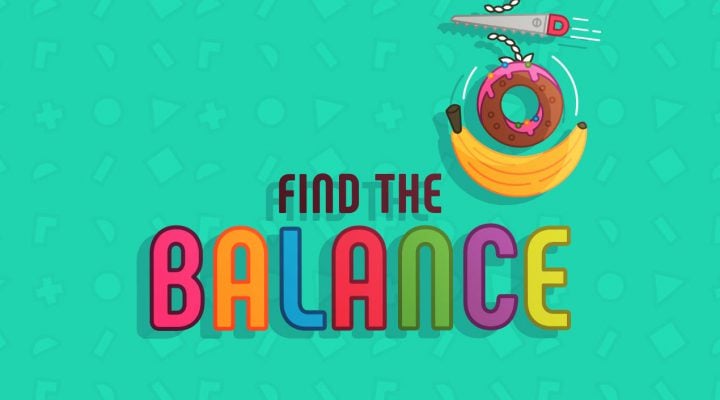 Find the Balance is an object-stacking physics puzzler by Digital Melody Games. In this game, players are challenged to balance a selection of diversely shaped objects on a set of platforms with limited space without any piece toppling over.

Gamezebo’s Find the Balance Tips, Cheats and Strategies will help you master the art of shape-stacking so you can climb to the top of the precariously placed leaderboards. 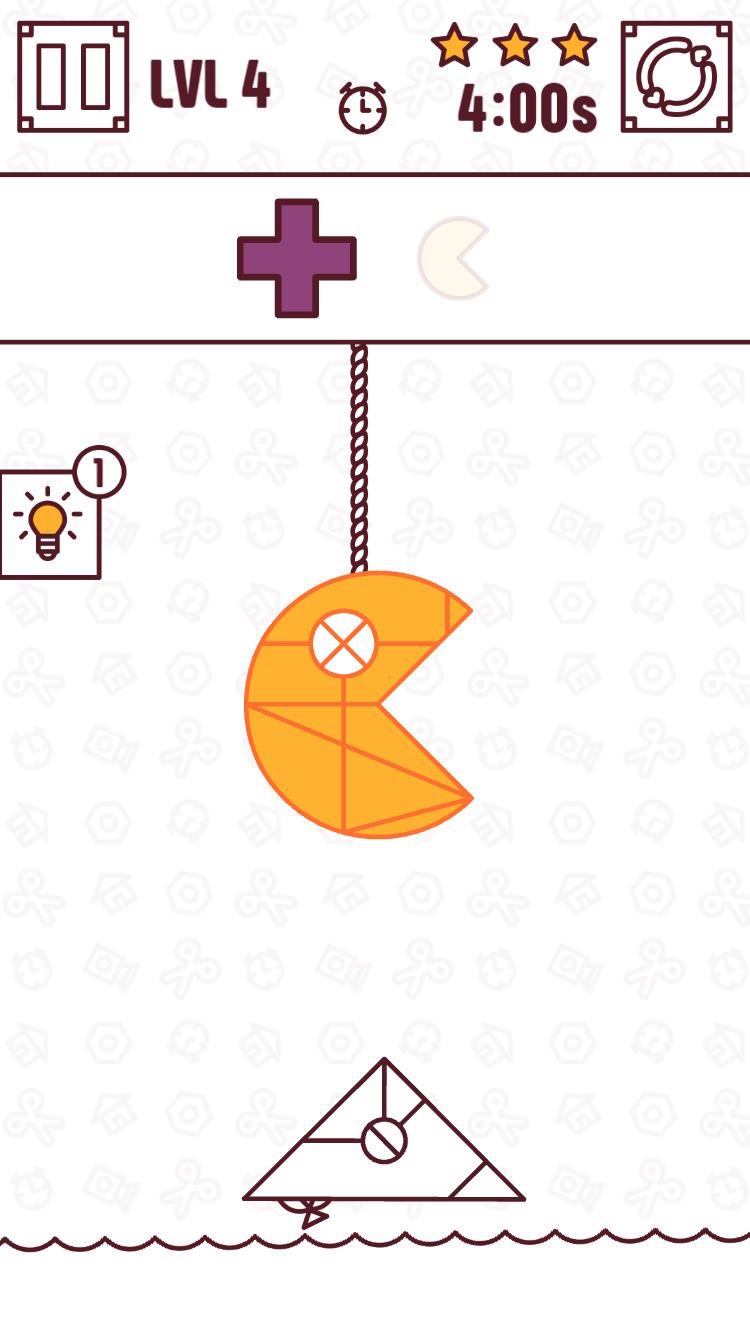 While there is a timer on each level that begins counting down as soon as you drag your first shape onto the playing field, this is only used to determine your star rating upon completion. There is no time at which you will fail a level, and as long as you successfully complete a stage, you’re guaranteed one star.

When you are working towards stars and against the clock, take your time at the beginning of a level to plan out your moves. As we mentioned above, time does not begin until you drag a shape down into the playing field, so mentally prepare your steps before touching anything. 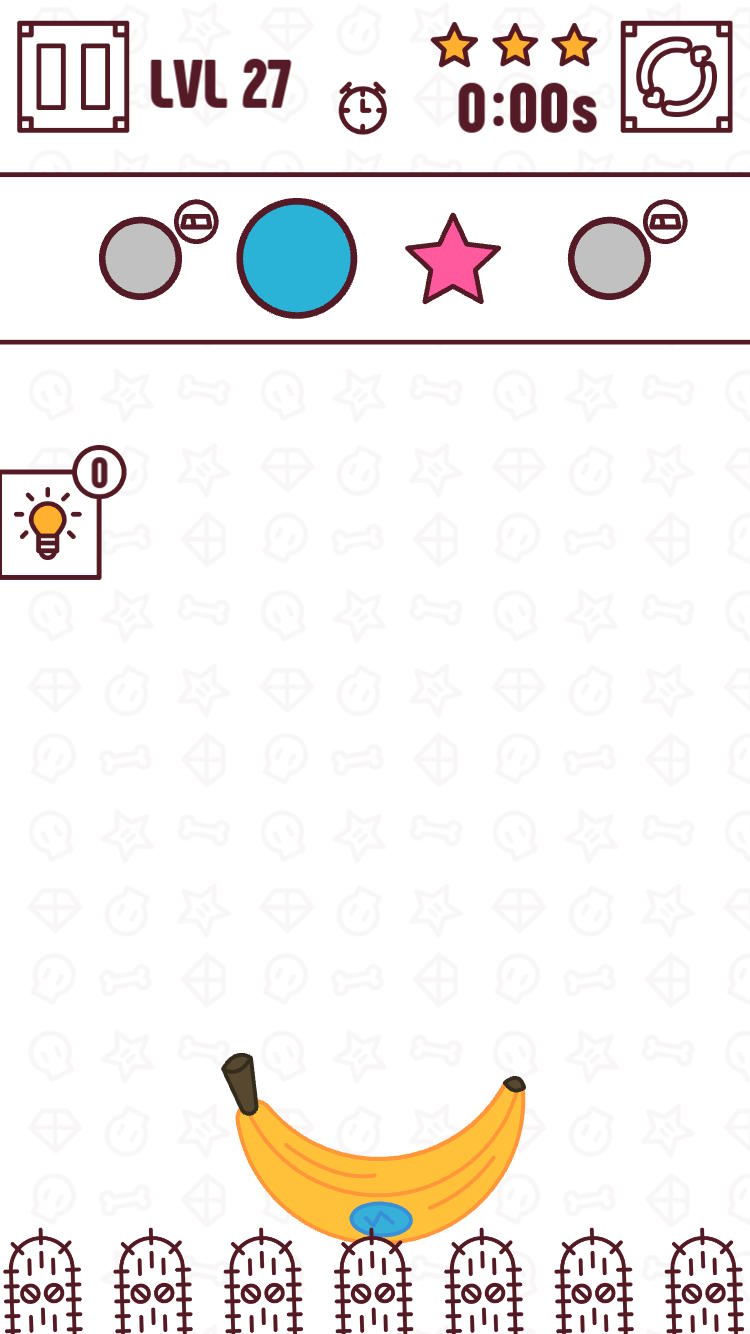 Each shape you’re given has its own weight, sturdiness, and general place in a stack. Be sure to consider if an object has a heavier or irregular side: the lollipop’s stick is much lighter than its head; the wrench’s box end is extremely heavy; the apple’s stick acts like a stopper if it’s rolling slightly.

Items with an icon above them that looks like a tiny rectangle in a circle (like the metal balls in level 27) are especially heavy. Circles usually need a wedge or bowl shape to keep them from rolling away. The banana can actually work well as a base if it has a wide enough platform to sit on, but long, flat objects like the pencil are usually the best base.

For any item, use your rope as a guide: it will stick out of the center of the object when you first drag it down. Of course, since many shapes are heavier on one end than the other, you don’t always want to position them directly centered, but you can use this to help you adjust accordingly. For instance, the banana is slightly heavier on its stem side and the sticker is its center point (you can tell because the rope sticks out of it), so we usually want to place it with the stem side closer to the base. 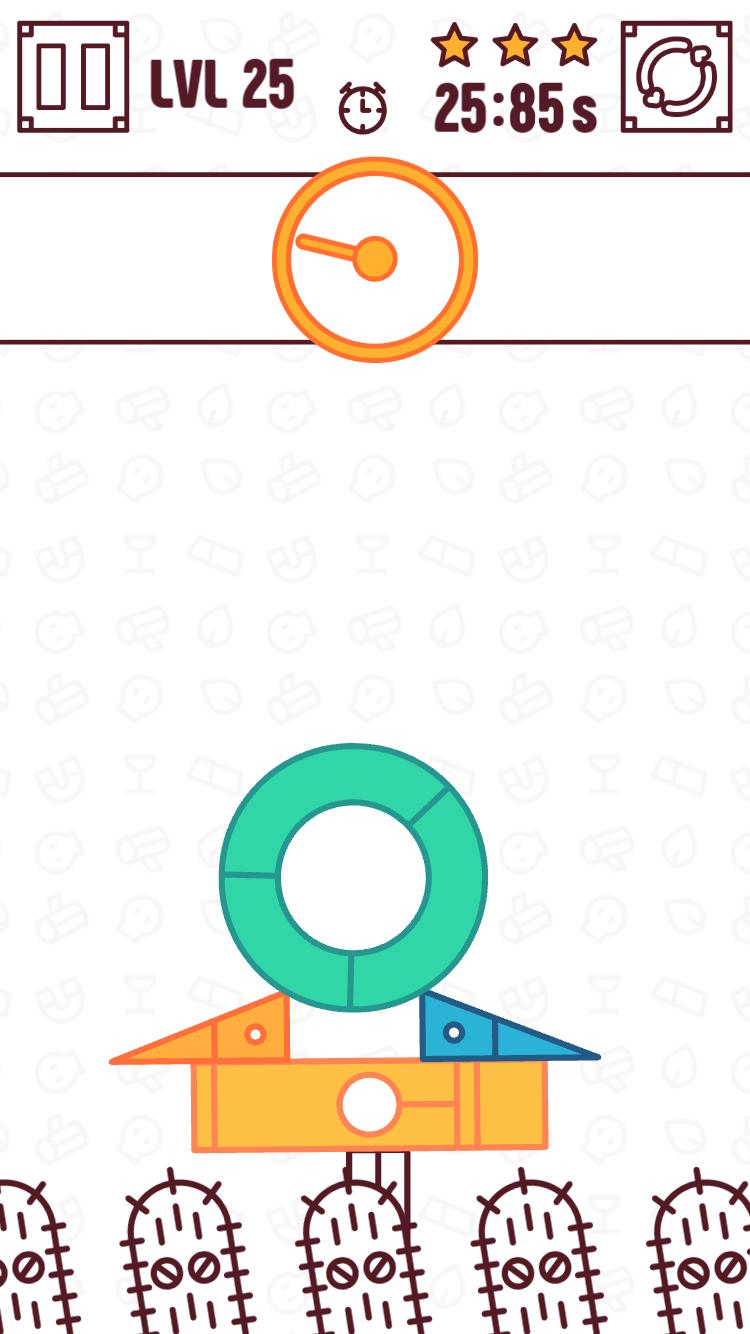 With the timer and physics-based gameplay, Find the Balance seems like a fast-paced arcade experience at first glance. However, it’s much more of a puzzle game and should be approached with that mentality. Think of it less like Stack and more like Tangram. The challenge is in arranging shapes just right, not in going quickly or dropping objects on a whim.

The Tangram comparison can also help when figuring out solutions. Two triangles can be stacked into a square or flat surface; points can fit inside valleys; a slanted edge can create a useful slope. 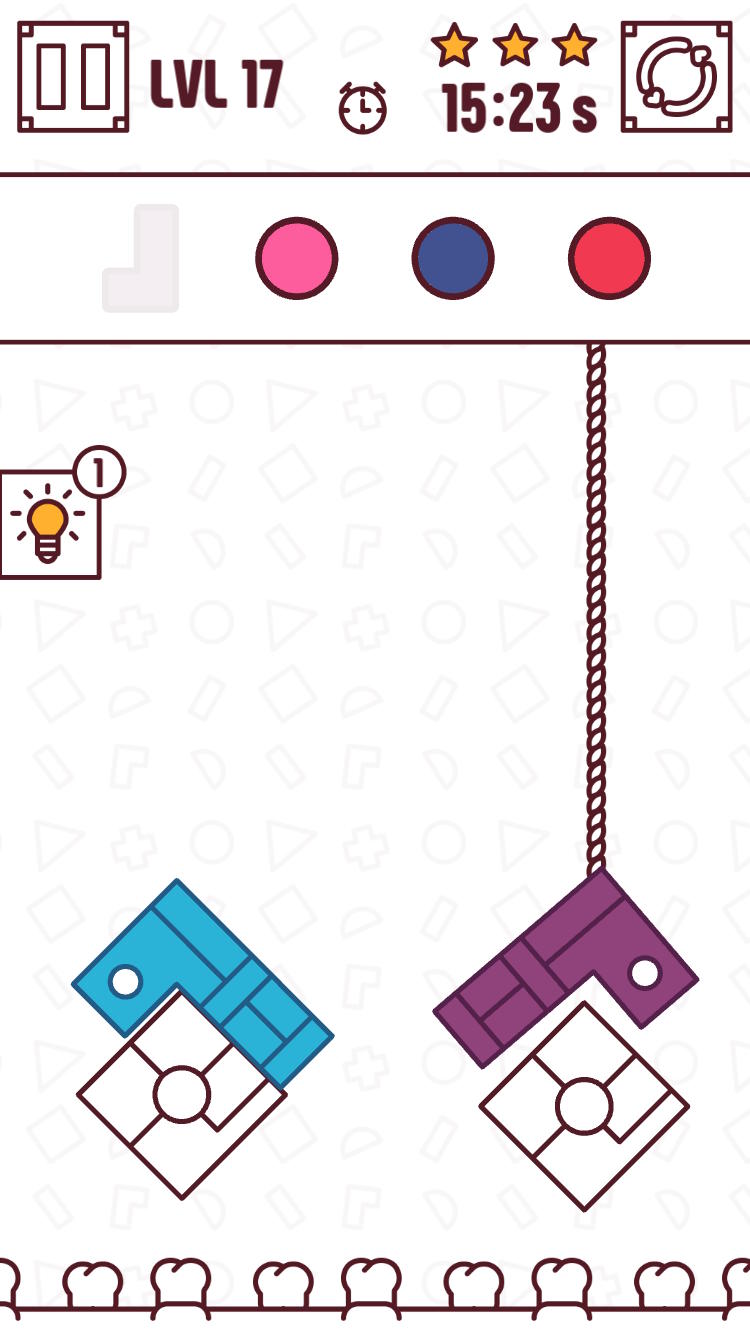 Figuring out the best approach to stacking each level’s shapes is the first challenge, but actually executing that vision is an important part of Find the Balance. You may know a square needs to be placed in the center of a platform, but it takes precision to get it in the exact right spot.

Always drag shapes as close to their destination as you can before cutting the rope. You want them to fall the shortest distance possible before landing. Besides knocking other objects already on the stack, shapes can turn or land at an odd angle when falling, often tipping over. A circle dropped from a distance will end up rolling much more than one dropped from just above its destination.

You cannot intersect shapes while dragging them. Your currently selected shape will turn transparent if it is intersecting something, indicating that you cannot place it there. Drag to your desired location and then adjust ever-so-slightly until the shape is not transparent before letting go.

Stack for the Long Term 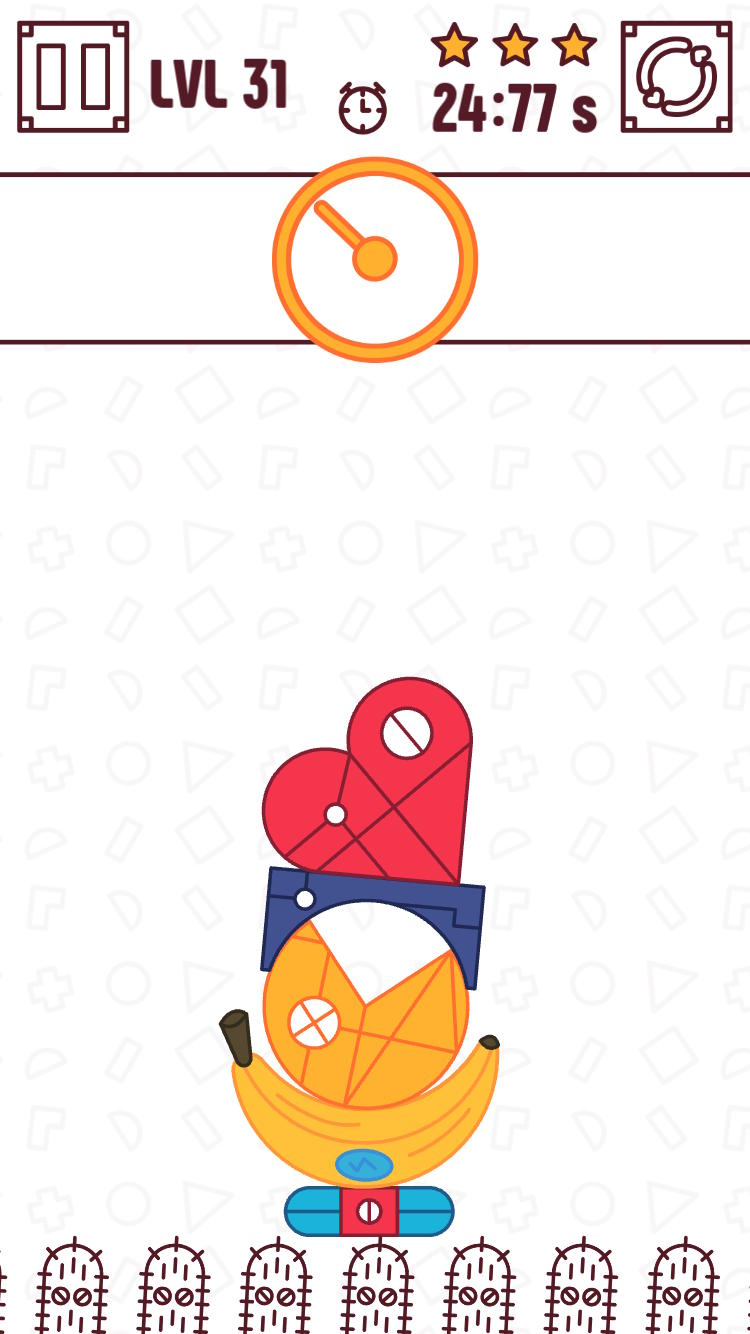 Once you’ve placed all of your shapes and the timer begins, your stack has to hold up without tipping over. The placed items can slide a tiny bit during this phase, but once anything starts tipping, the timer will stop.

When building, think of your stack as something that has to stay standing indefinitely. Don’t build for short term survival and just eking through the timer, as you can’t “trick” it. Aim for stability even after the timer is finished and you’ll likely find a much stronger organization.

You can usually tell if a stack is plausible or doomed while building: our final configuration on level 31 was something we tried numerous times. On each failed attempt, one item barely started to tilt at the end, which indicated we had a good foundation and just needed to adjust slightly. If objects are wobbly or sliding while you’re still placing shapes, it’s probably time to restart the stage. 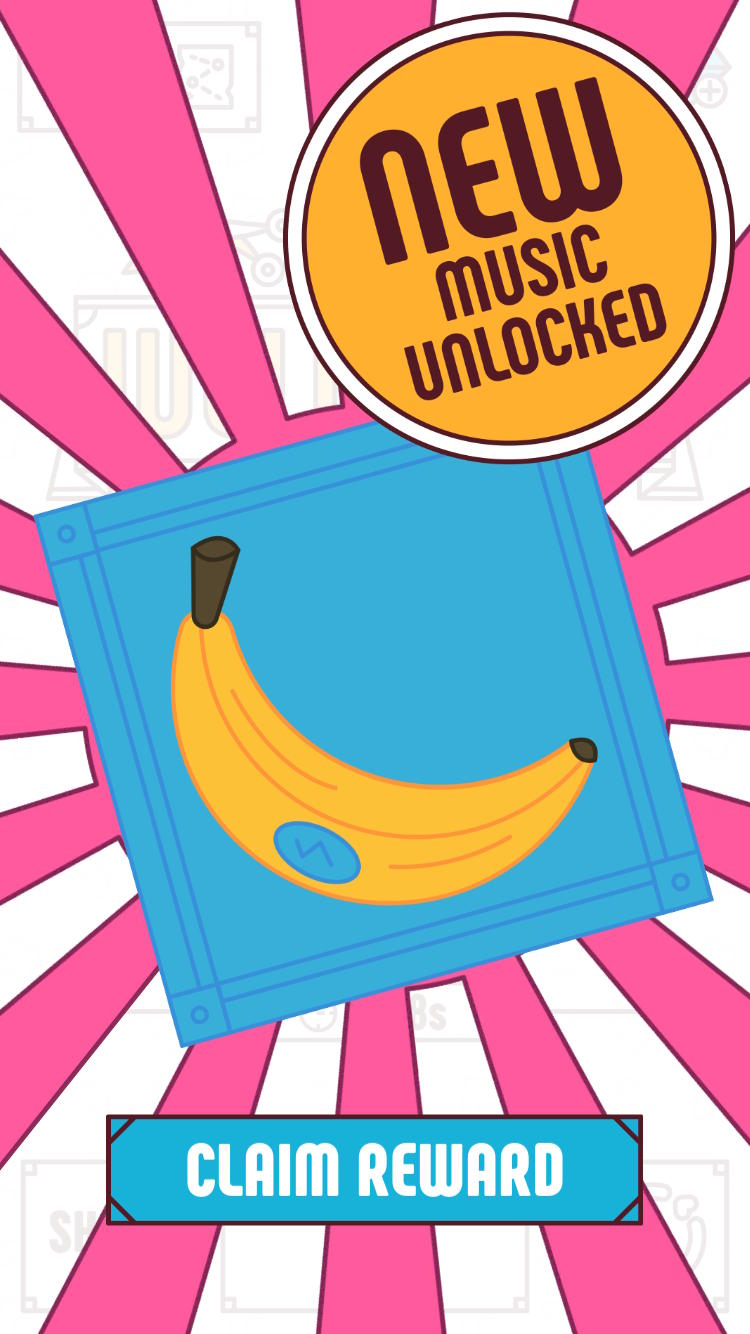 Gems are used for purchasing hints—which will show you a picture of a completed stack that you can emulate—as well as buying new types of scissors and in-game music. These latter two are not only optional aesthetics, but you’ll also unlock some for free as you progress through the game. Save your gems for hints and then buy the extras if you really want them.

If you need additional gems, you can replay any past level as much as you want and earn more. We recommend picking a stage you can complete quickly, with only a few shapes. But aim for a stage close to your current level, as you’ll earn more gems for later levels.

When using gems to purchase a hint, be aware that once you close the hint image, you can’t view it again. If you tap the hint button again after closing, it will spend another hint to show you the same image. Be sure to make a mental note of the suggestion solution (or take an actual screenshot just in case).