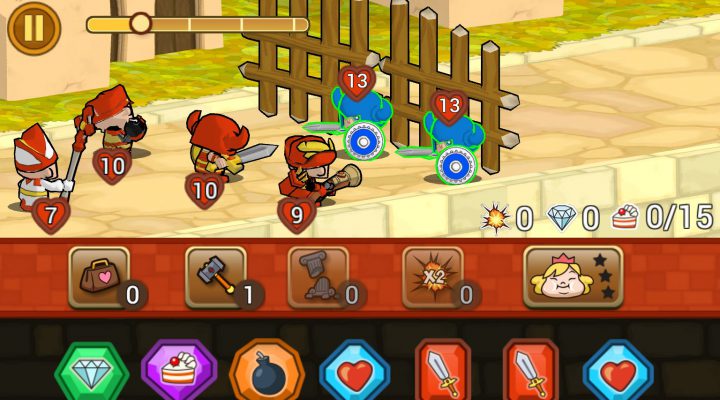 Always go for match-4 if you can 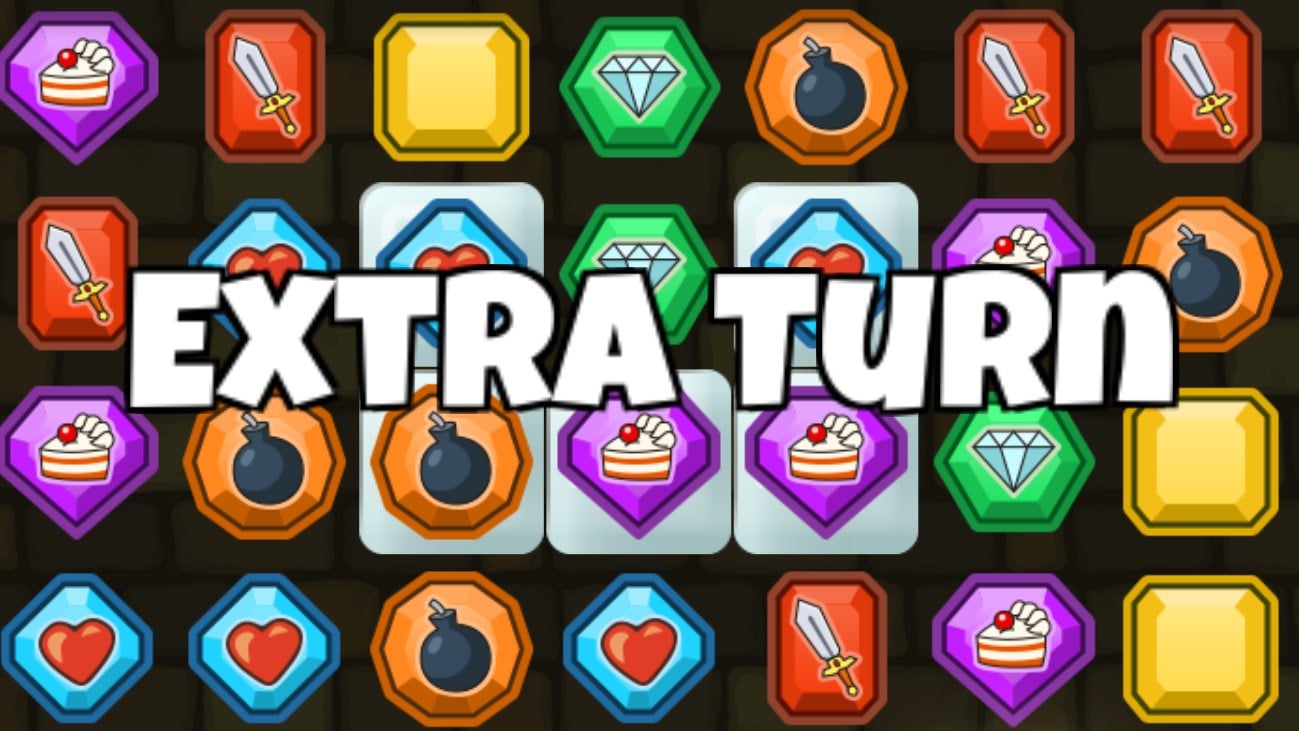 Even if you don’t necessarily need the tiles that the match-4 gives you, the free turn is pretty much always worth it. As well, you also get the glowing gem that will deliver a supercharged effect whenever you do make a match with that gem next. So, there’s both short and long-term benefits to making these matches, plus you can make cascade matches more easily by clearing out a bunch of gems at once. There’s little reason to not go for these matches as soon as you can. 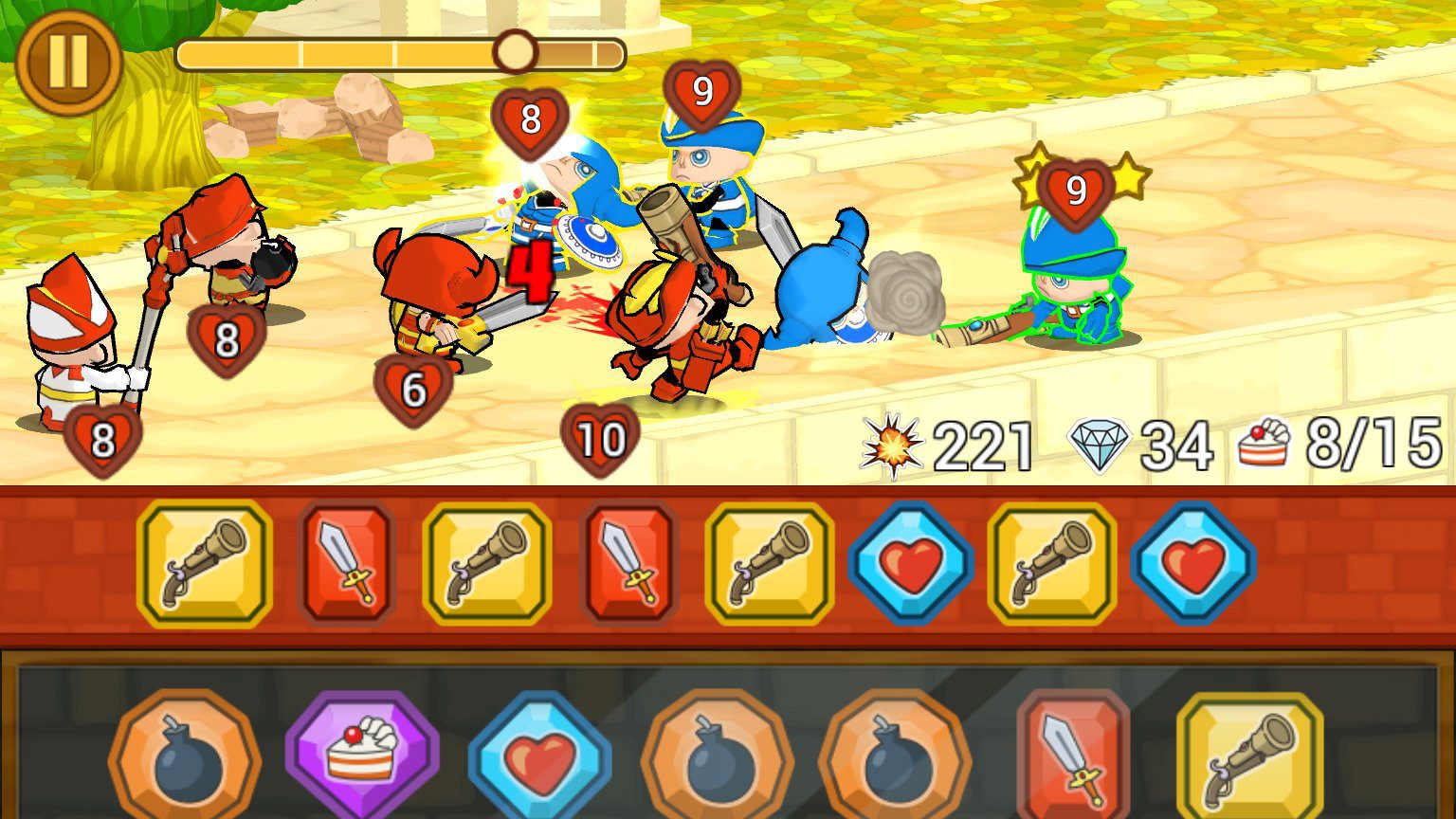 Remember that two of your three attacks do group damage: the gunner attacks the front row, the bombs attack the front two rows. You can’t attack back row enemies, so getting rid of that front row is very important so that you can at least force back row enemies to the middle row so you can start whittling them down.

The bombs are very important 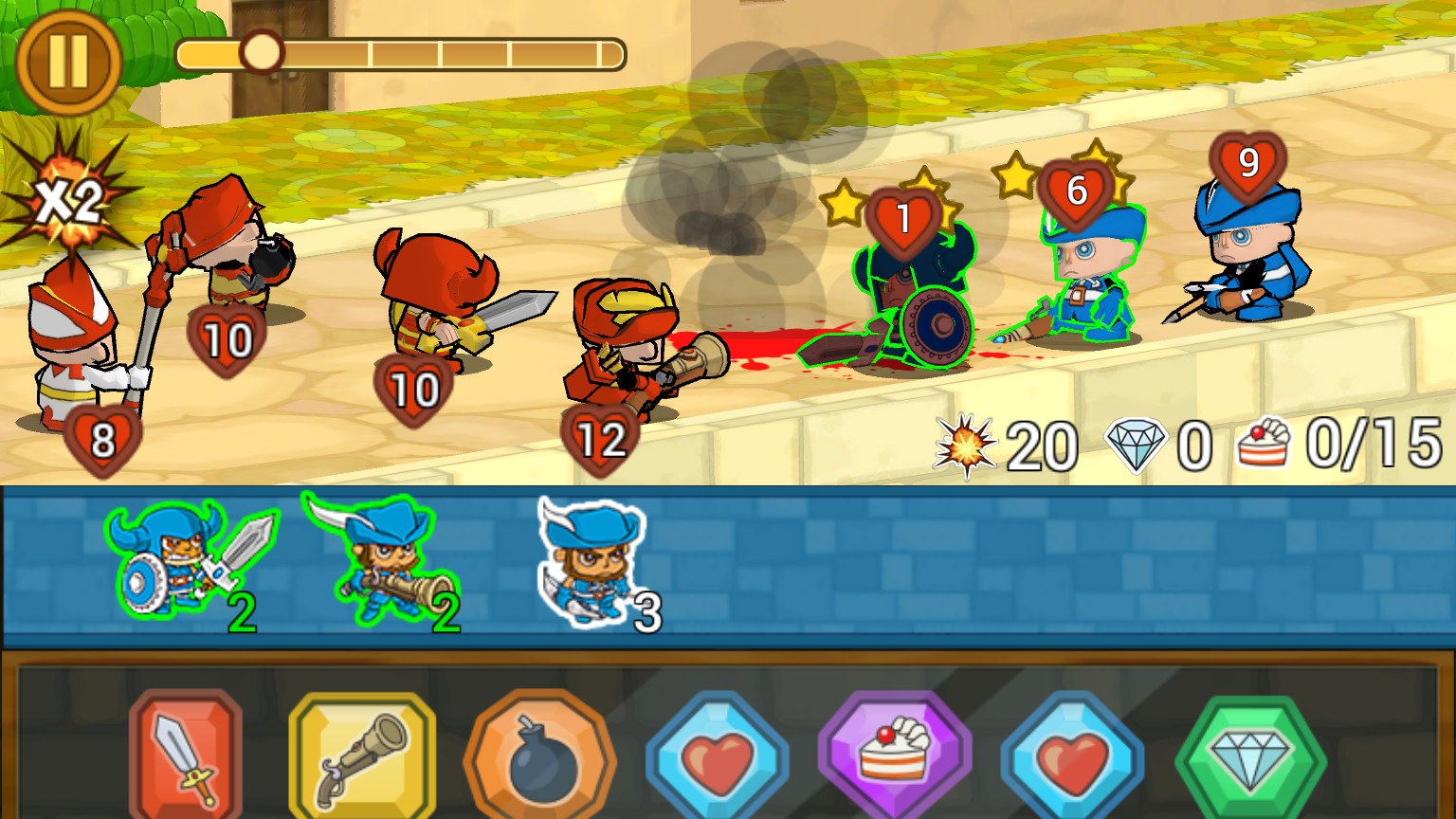 The bombs don’t necessarily do a lot of damage, but the benefit they have is to stun enemies, which will prevent their turn counter from decreasing for one round. This benefit is worth as much as whatever damage you do, as you can use this as a way to stock up on diamonds or cake for a free turn, to charge up cake, or to just make other free matches. 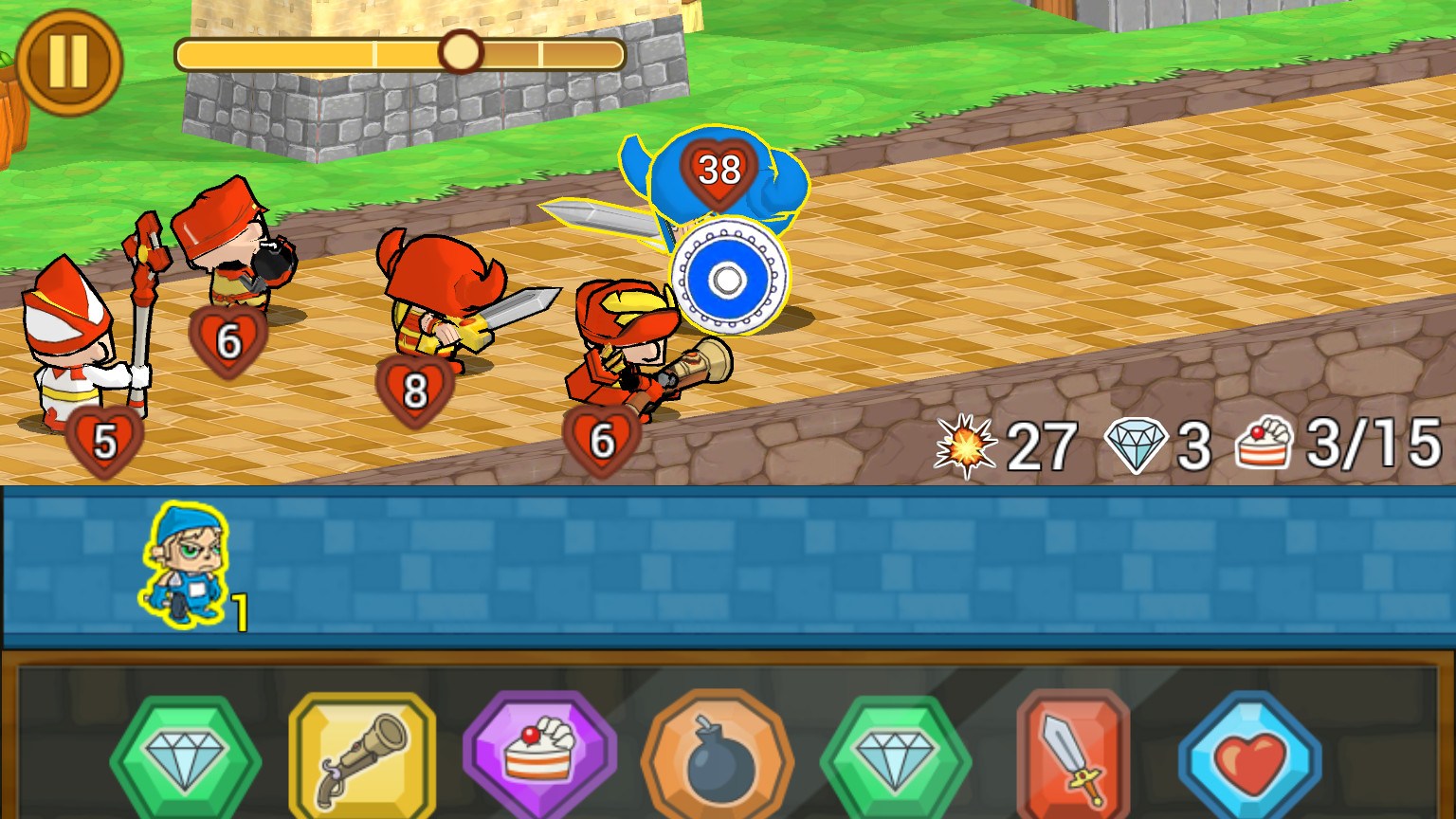 When you have groups of enemies, it’s best to use the group-clearing attacks. Attacking only one enemy can be a waste of time – doing damage to lots of enemies at once is likely a better use of your turns. But if you get a single enemy in front, you’re going to want to eliminate them so that you can bring other enemies up to the front, so you can take them out with bombs and gunners. Swords can be useful, just only in the right situations.

Use the princess smartly 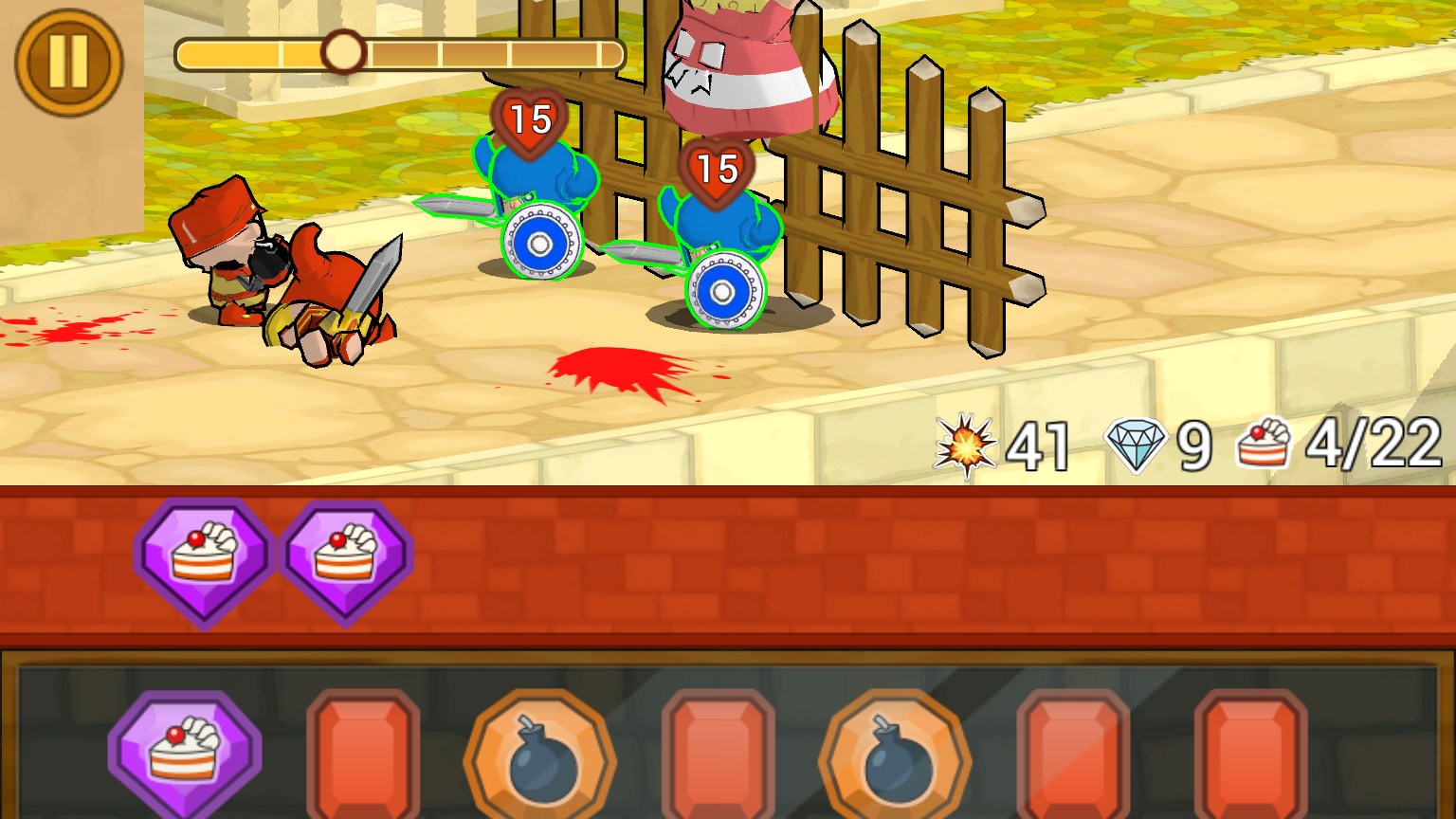 Unless you’re in a level with a challenging boss at the end, I recommend using the princess as soon as it’s smart. Use her when there’s large formations, as she can attack the entire formation at once, including the back row (which no one on the squad can attack), so you want the maximum effect from her. I don’t think it’s worth saving her up unless you know there’s a challenging boss at the end where you could use her enhanced effects.

Go for health and not just blank gems 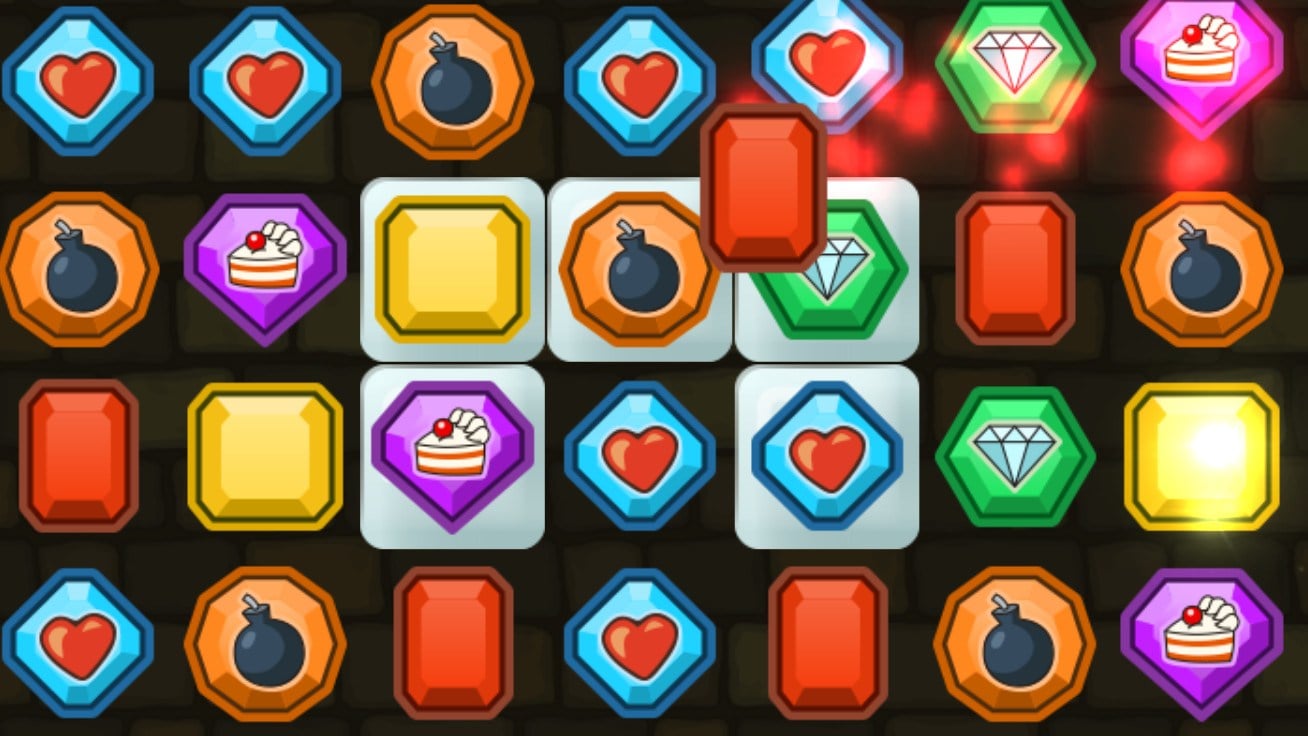 When a character dies, the problem that you can run into is that you can try to revive them by matching that character’s blank gems, but you won’t be doing any damage, naturally. Healing gems will refill the respawn counter for a character as well, though. Try to focus on this, because you not only get the benefit of reviving a character, but can also heal other people in the party. In general, you don’t want anyone to die because they limit your attack options.

Level up the warrior last 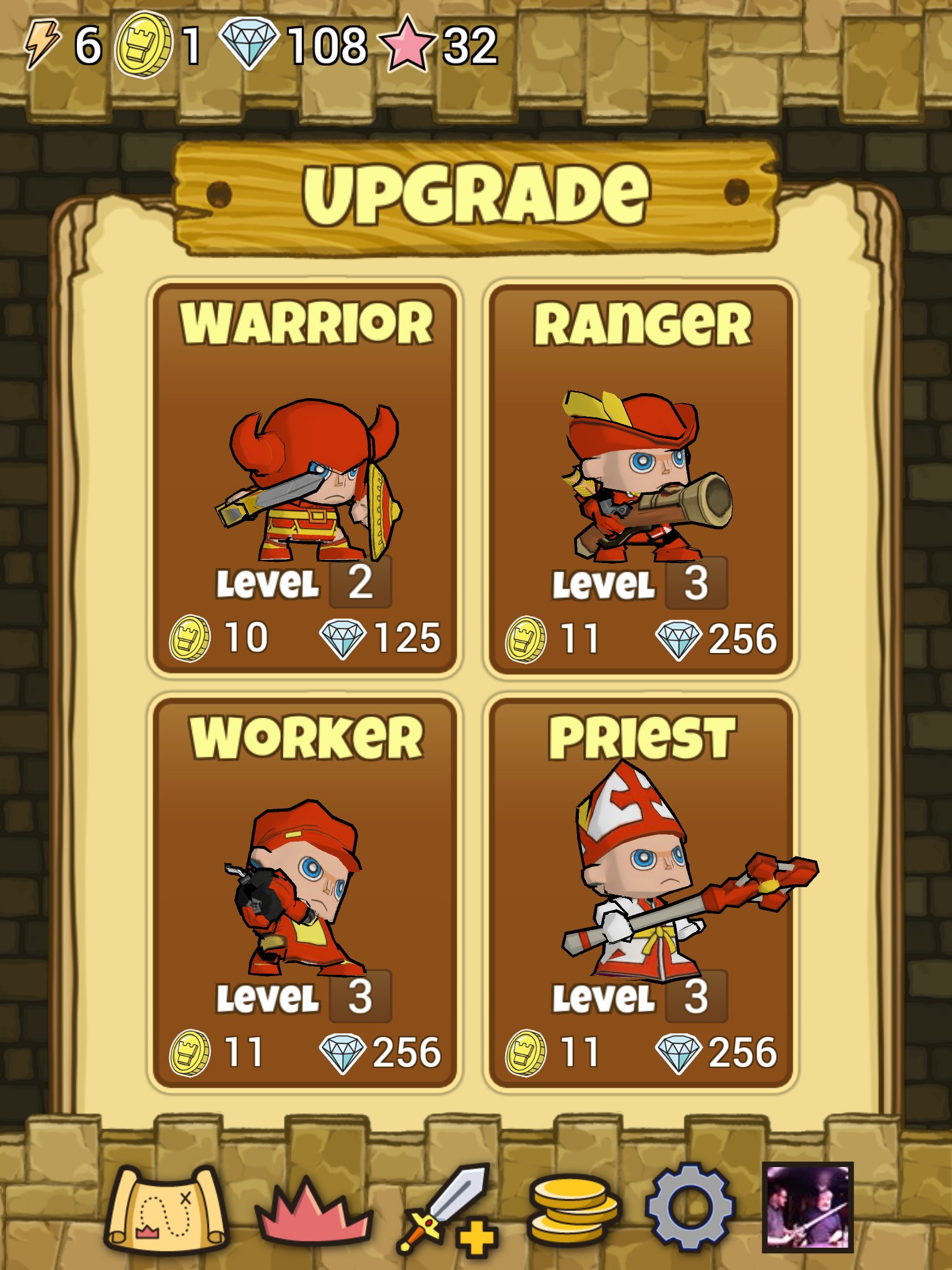 You’ll need to keep your characters alive, so keeping the priest upgraded is important. The bomber is more useful when he’s doing more damage, so level him up. The gunner does a nice balance of damage and attacking multiple characters, so they’re worth keeping upgraded as well. The warrior is really a limited-use case, or only if the match makes sense to help make matches in future turns, so don’t focus so much on keeping them upgraded, it might not be worth your hard-earned gems.

Save your powerups to level 15 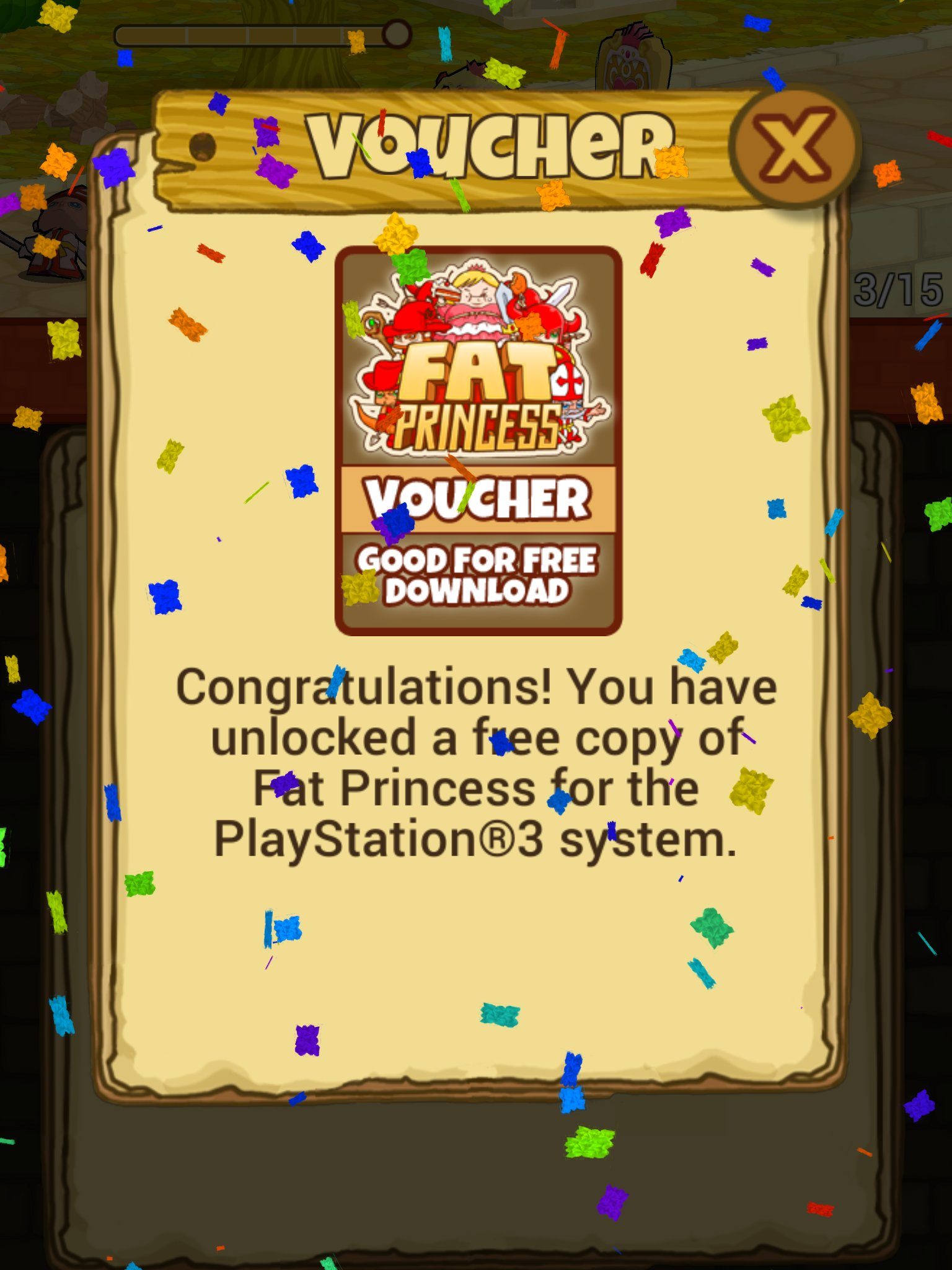 You will get some of the powerups for free as you play, but ideally, if you’re working for that free copy of Fat Princess for PS3, save them all for this level. It’s not inordinately difficult, but it is a fairly lengthy level, and a powerup or two will come in handy if you’re trying to beat it. Smart play will let you get that voucher without paying a cent!