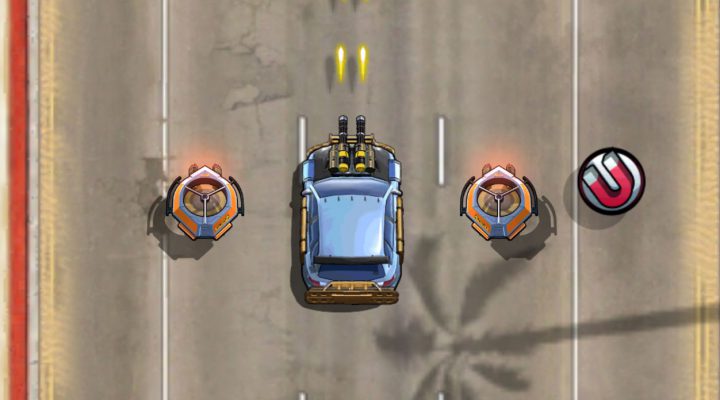 Life in the Fastlane is guaranteed to make you lose your mind. So said The Eagles, and we don’t argue with them.

But life in Fastlane: Road to Revenge doesn’t have to make you crazy. Space Ape’s arcade-style drive and shoot title is fast-paced fun, but the kind that you still need to work to master if you want to reclaim every block in the city and be the boss once again. Honestly, who doesn’t want that?

We’re willing to help. We’ve compiled these Fastlane: Road to Revenge Tips, Cheats and Strategies to guide you in your quest for vehicular vengeance, and just so you know we aren’t out here freelancing on our own, we even went straight to the source and got a several pieces of advice straight from the developers. Fire up the engine, load the machine guns and let’s hit the road!

Stick to Just a Lane or Three 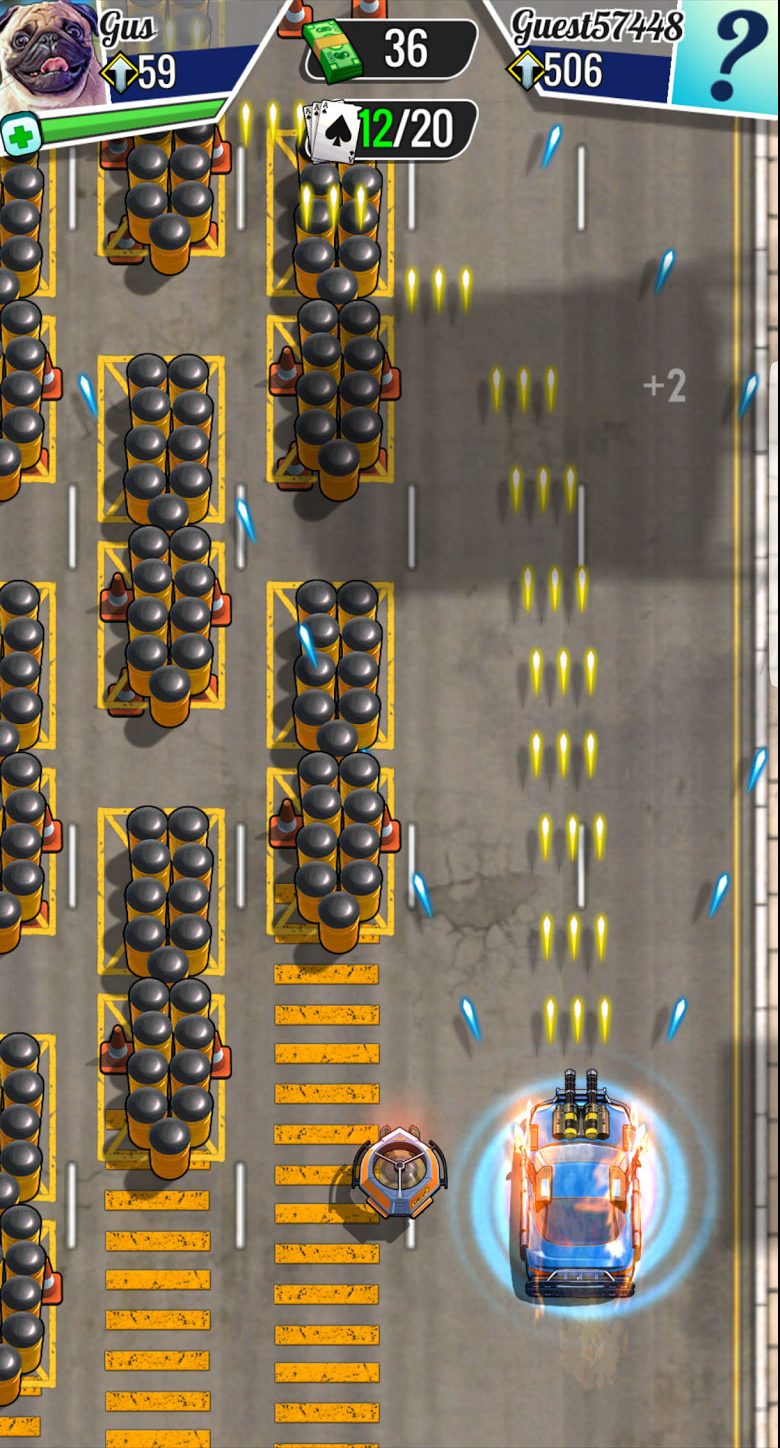 It’s tempting to spray bullets all over the road and try to blow up everything in sight, and once you’ve got a car nice and upgraded, there are more opportunities to do just that. Early on, though, particularly before you’ve got the extra guns installed, that’s a good way to get yourself killed.

That’s especially true once you get deeper into a run and the enemy cars start coming faster. You literally won’t have time to switch lanes and destroy what’s coming, so the best idea is just to stick to a single lane as much as possible and slide left or right by just one lane only when necessary.

Move to Live Against Bosses and Gun Trucks

This might seem like it contradicts our previous tip, but the gun trucks and boss cars you’ll encounter are a different beast. They fire bullets and rockets at you, but they always aim where you currently are located.

With that in mind, your best bet is to intentionally start away from them, even if you can’t hit them, then wait for the bullets or rockets to fly in that direction before moving beneath them for as long as possible. You’ll get good at this tactic with some practice, and while you won’t always be able to pull it off with regular gun trucks because of everything else on the road, it’s still a handy strategy to keep in mind. 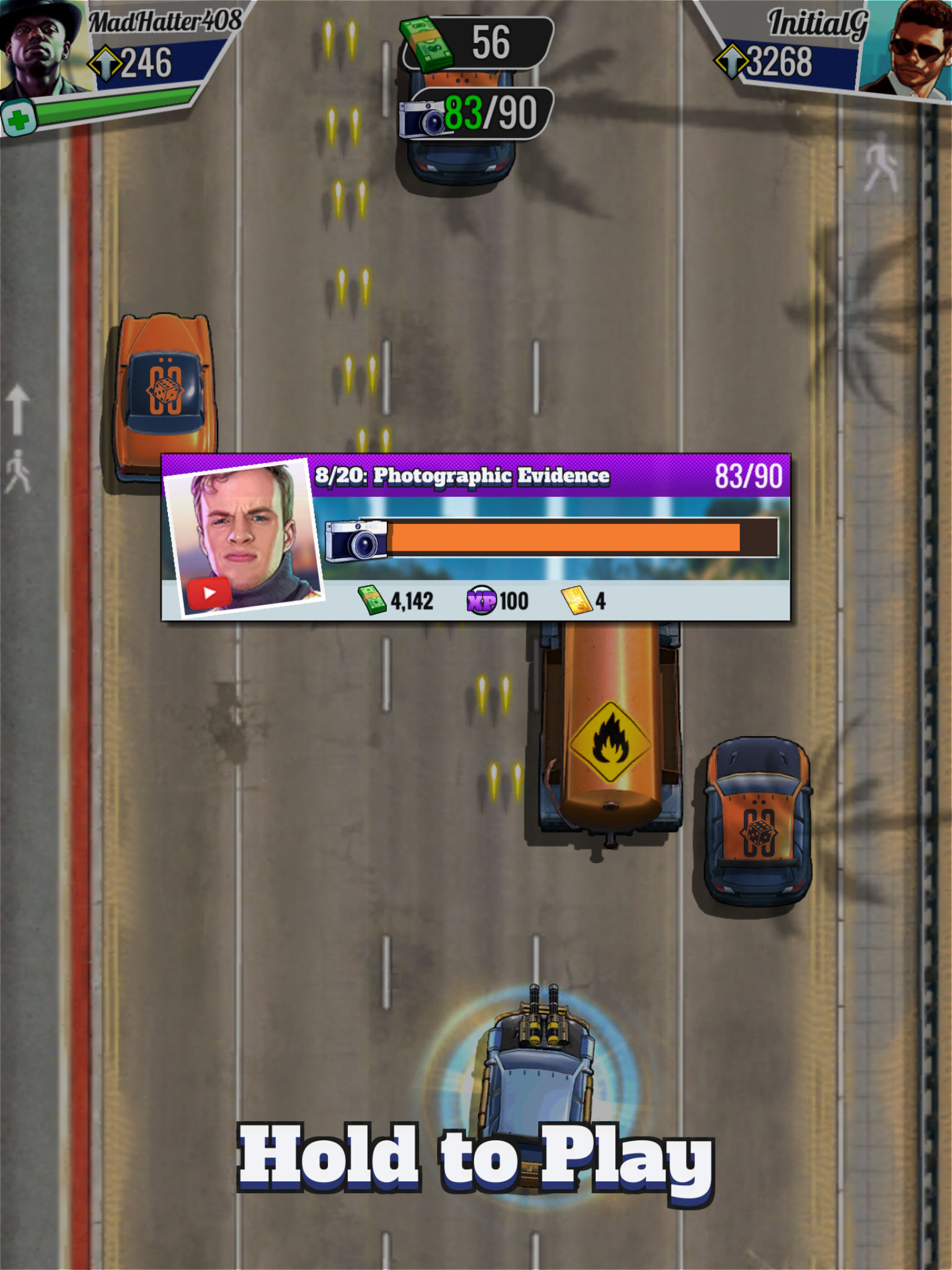 Fastlane doesn’t have a pause button, but it has something that’s arguably even cooler. If you just take your thumb or finger off the screen, time slows to a crawl. You can use this to check your current goals, but it’s also super helpful for planning a quick route out of trouble if you’re surprised by rockets or roadblocks and things just get too hectic.

As the great American philosopher Kanye West once said, you need to pump your breaks and drive slow. Words to live by in this game, and all you have to do is not touch the screen. Not for too long, though, as stuff can still kill you even with time slowed down.

Pattern Recognition is Your Friend

As Space Ape assures us, the roadblocks and rocket attacks in Fastlane aren’t random. There are defined patterns to them in each level, even if they don’t always appear in the same order. Have to keep us on our toes somehow!

When you reach a new section of the city, one of your first objectives should be to start sniffing out the roadblock and rocket patterns. Once you commit them to memory, it makes things that much easier once the action speeds up, as you’ll be able to switch lanes to safety without having to think too much about your moves. Now whether you’ll be able to destroy what’s there when you move is a different story, but that takes us to … 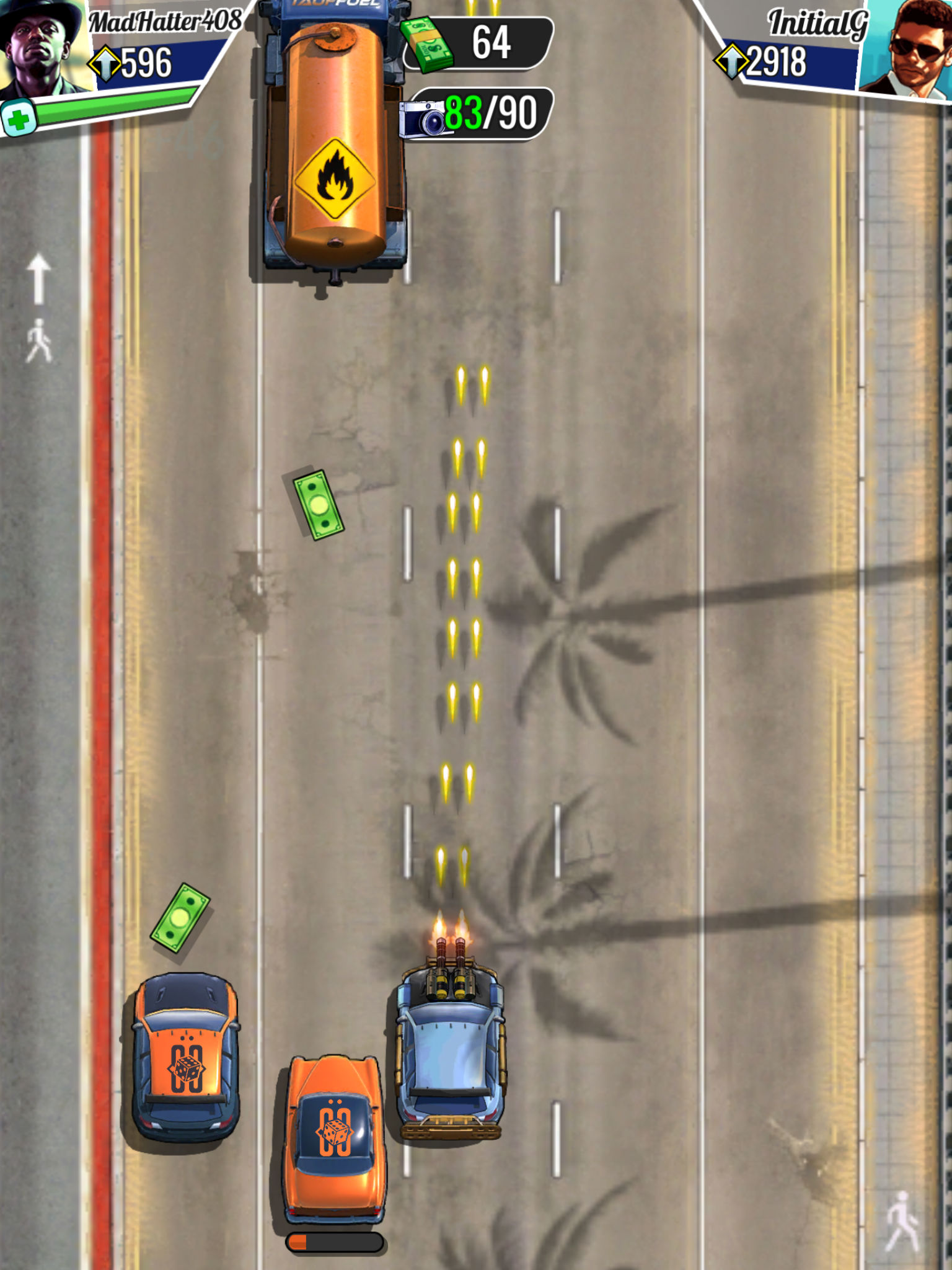 A bunch of things in Fastlane will kill your car in one shot. Happily, other cars aren’t among them. As long as you have enough health or have the Repair Bot UAV active to fix you up, intentionally ramming other cars to destroy them is a perfectly valid strategy.

There are even goals that require you to run into a certain number of cars to earn rewards. Ramming can be especially useful against Rival vehicles since they soak up a ton of damage before they explode. If your guns aren’t upgraded enough to get the job done, consider running into them so those precious XP don’t get away.

Switch to Higher Level Cars as Soon as Possible

It might seem like a bummer when you consider that switching to a new car means having to upgrade your guns and armor all over again. But there’s a very compelling reason to do it as soon as you can (and since you unlock a new car every 10 levels, that’s pretty often early on): it might be your best chance for beating a level you’re stuck on.

Why? Well, a higher level car earns cash and Rep much faster than the ones below it. So even if you only survive for the same amount of time in a given run, your score will automatically be higher. Our advice would be that when you are getting close to unlocking the next car, start saving your cash instead of continuing to upgrade your current ride. That way you can purchase a few upgrades right away for the better car and hopefully get that boss in your sights in just a few runs. 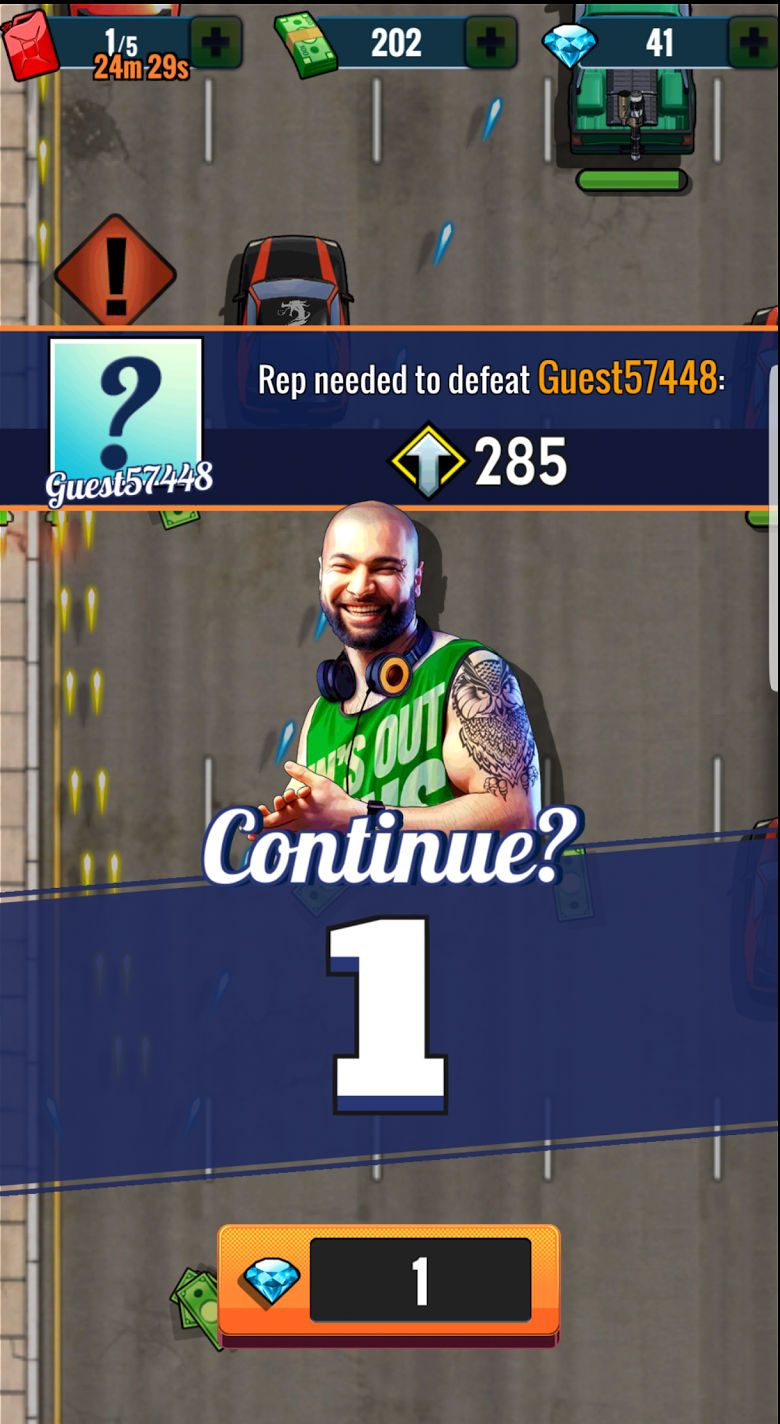 Here’s the thing, though: they’re the only way to unlock new cars and then to unlock the oh so vital extra guns once you’ve got that new car. So you really can’t afford to waste them.

The exception is to use a Gem to continue once you’ve got a good run going, because the extra XP and cash might be worth it. If you’ve just died close to a Rival or are in the middle of a fight with a APC, the first continue is a good purchase — particularly since you often get more Gems for defeating the APC, so you can make back what you just spent and then some.

Otherwise, hanging onto those Gems for when you really need them is the right move.

The Repair Bot is the Best UAV in the Game

Since you can’t control the order in which you acquire UAVs, it’s possible this advice really isn’t that helpful. Just know that when you get the Repair Bot, you can do a little happy dance, because even the devs admit it’s kind of OP compared to the other UAVs.

What you might not realize is that you can spend cash to level up your UAVs, and you should definitely do so with the Repair Bot as soon as you get it for maximum effect. Having any UAV pop out of the crate again will bump it up to the next tier, where you can repeat the leveling process.

Trust us, there’s nothing quite like cruising down the road in Fastlane with a Repair Bot on either side of your car. You’re not invincible thanks to those pesky roadblocks and rockets, but you’ll feel like it.