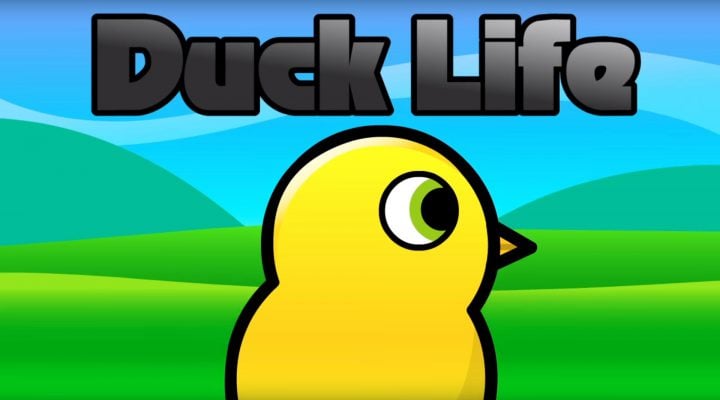 Duck Life is a racing sim that places players in the role of a duck trainer. With genetic modifications recently banned in the competitive duck racing circuit, your duckling trainee will have to get ahead by the sweat of his beak. Gamezebo’s Duck Life Tips, Cheats and Strategies will help you maximize his practice regimen so you can both enjoy the sweet taste of victory as soon as possible. 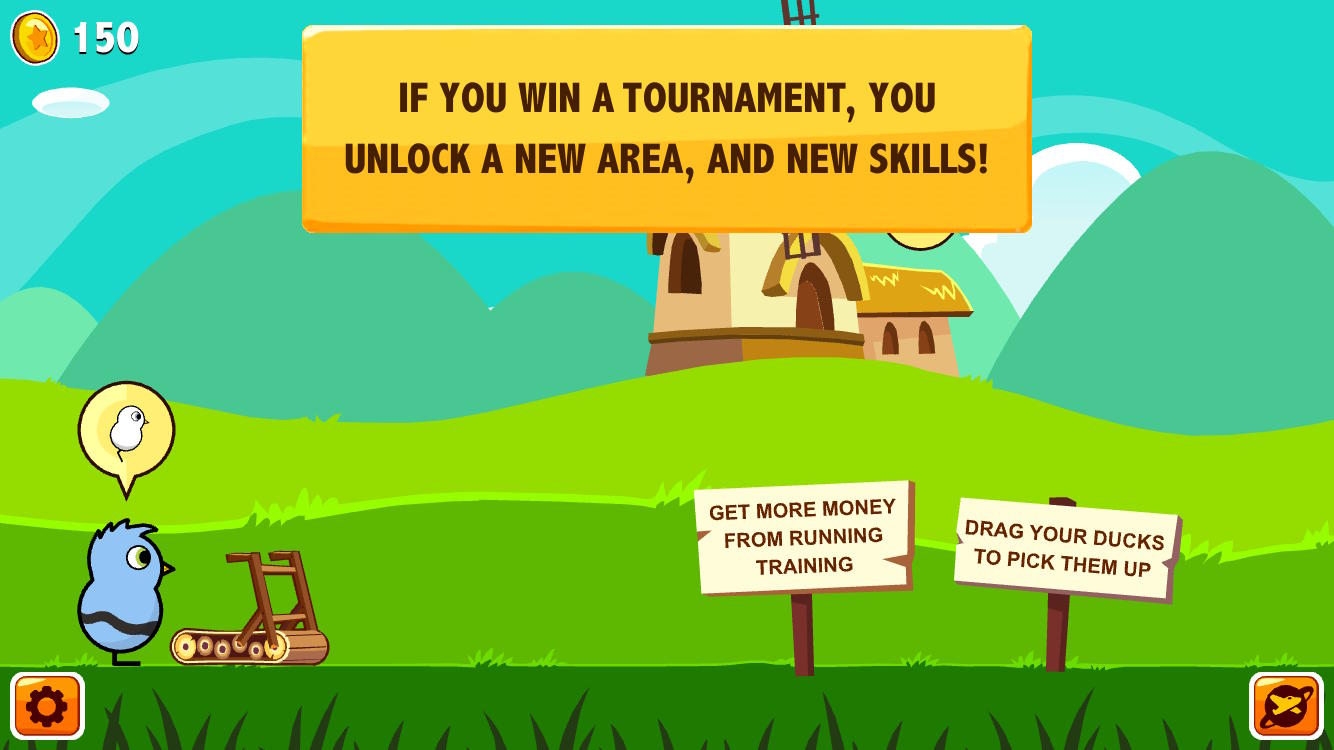 The goal in Duck Life is to enter your duck into racing tournaments and have him progress up the circuit ladder across multiple locations. Each area of the game contains a selection of practice races as well as one three-race tournament that focuses on a particular skill. There is also a trainer in each location that can help your duck improve that skill: for instance, the Swamp has a lot of swimming in its races, and the trainer there teaches swimming.

One of the ducks hanging out in each location will have a ticket for the tournament that he’ll hand over if you beat him in a race. Winning first place in the tournament—which averages your results for its three consecutive races—in an area will allow you to move on to the next location. You can always return to previous areas and train in the skills offered there by tapping the airplane icon in the bottom-right corner of the main screen.

While you control your duck directly during training sessions, he’s on his own for the actual races. His success in any race or tournament is determined solely by his skill level in each ability. Your opponents are not other players but NPCs, and races always play out the same: if your duck loses a race, he will have no chance of winning it until he trains some more. 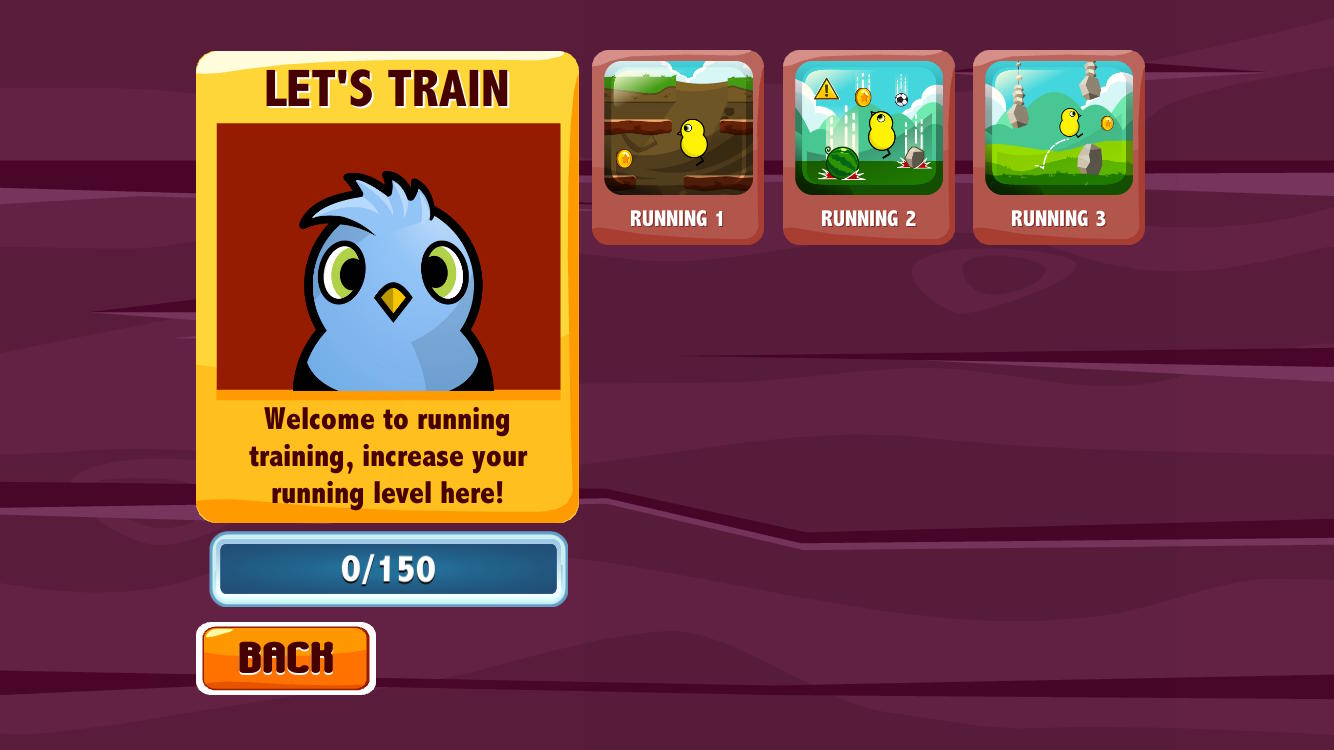 Most of your time in Duck Life will be spent training your duck. Although you can have multiple ducks on your team by purchasing additional eggs from any of the area shops, there is really no benefit to doing so. While tournaments allow you to assign different ducks to each race, you can also use the same duck for all three. This is our recommendation, as it allows you to put all your training time and points into a single duck.

Each area introduces a new trainer and ability for your duck to master. The starting location, Grassland, has a running trainer. Swamp trains swimming, Mountains train flying, etc. You won’t need later abilities before you’ve reached their location—you don’t need to fly in the Grassland—but you will need to keep increasing abilities you have learned. 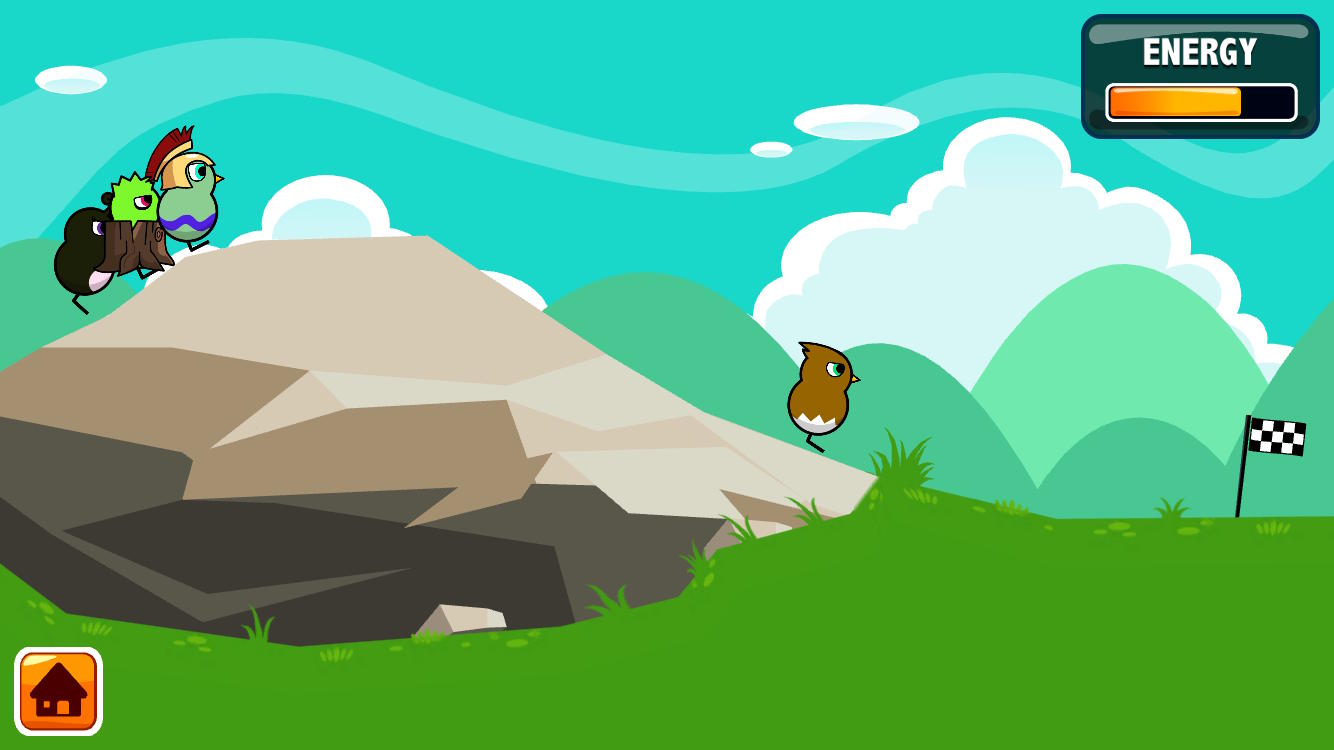 Running will be an important part of every race you enter, so we recommend increasing your running stat to the maximum level of 150. At max running, even with lower skill levels in other abilities, you can still often win a race just by speeding ahead during the running sections.

Otherwise, most races can be won by bumping your newest trainable stat up to 50-60. If you’re losing, note which part of a race your opponent is pulling ahead on and then go back and work on that stat. If he’s surging forward in the water, return to Swamp and increase swimming a few levels. If he climbs much quicker, head back to the Glacier.

Best Training Bang for Your Duck 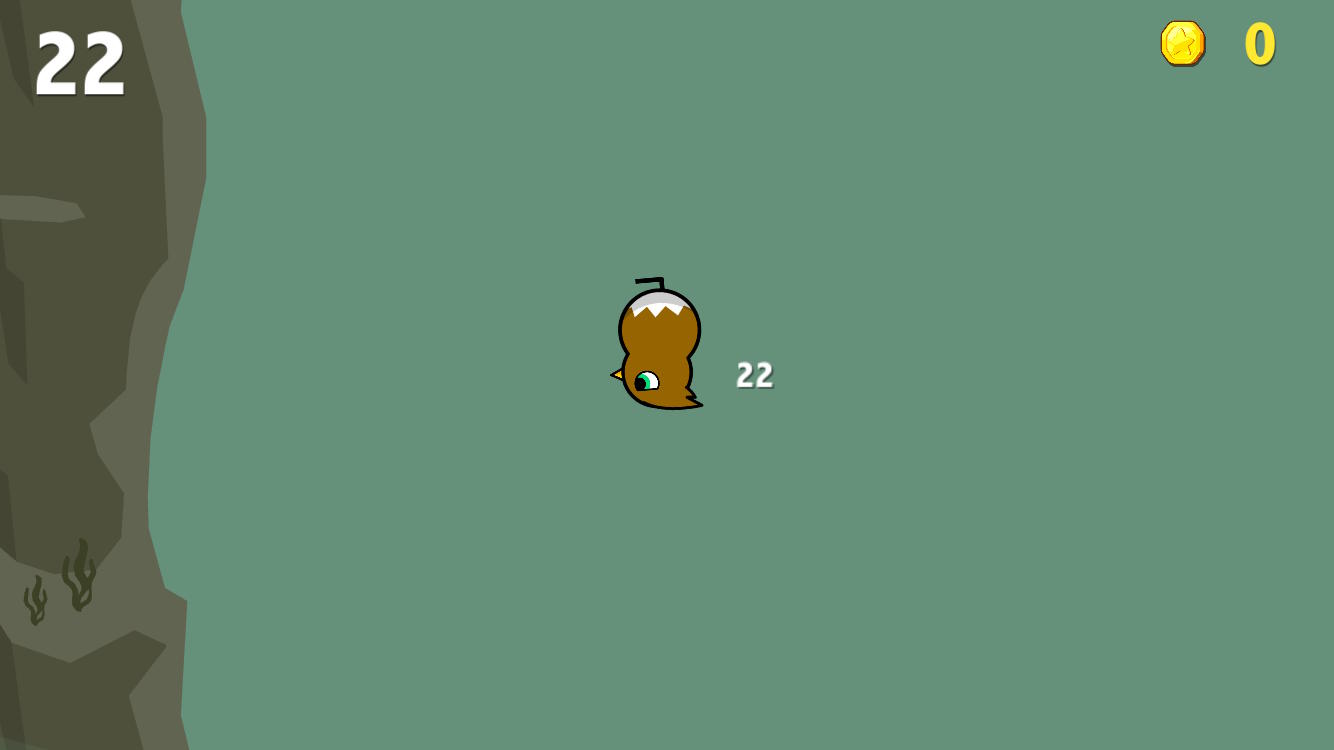 Each trainer in the different areas offers a number of training courses for you to choose from. These courses all award the same skill level improvement—one level for every ten points earned in the game—so the one you choose is up to personal preference. While mixing it up and playing the different games at each trainer can keep things fresh, if you just want to level up quickly, there’s usually a best choice for each skill. 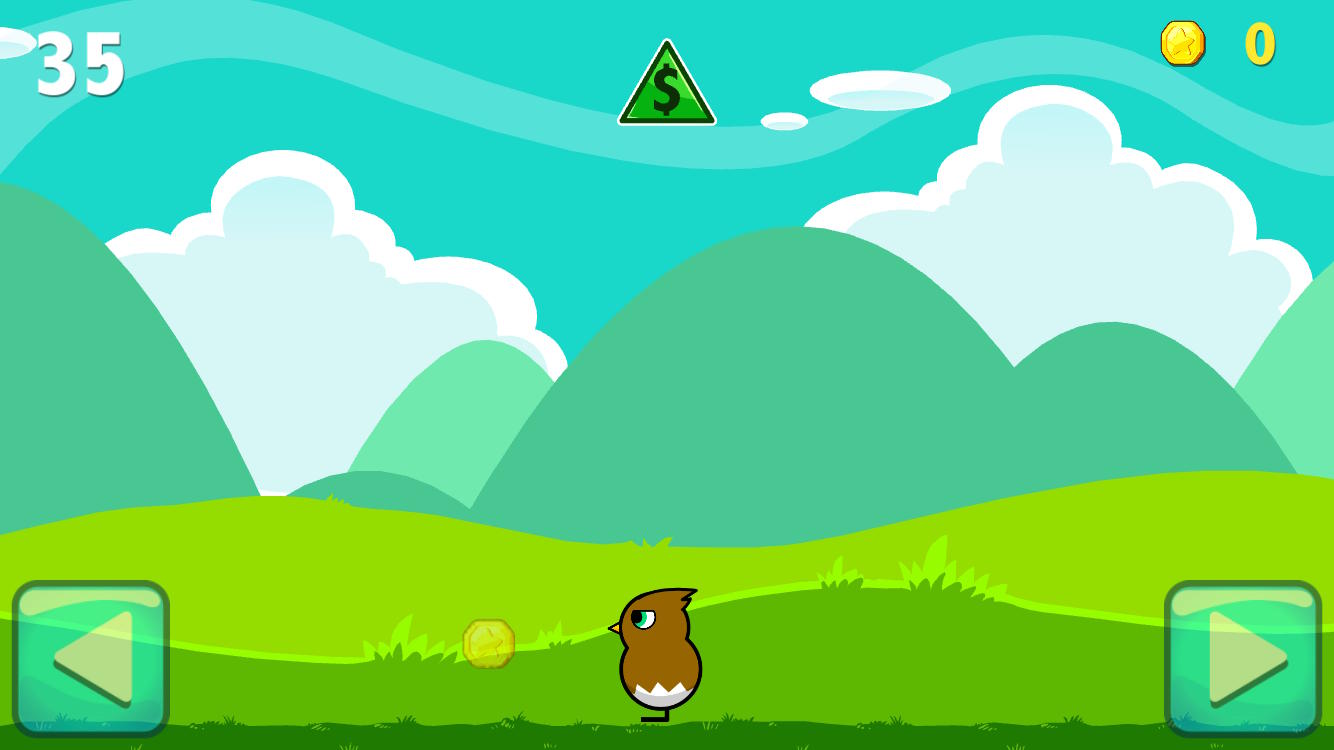 Running: Game #2, dodging falling obstacles. Running 2 gives you the most points for the least effort: you simply have to move left or right to avoid objects falling from the sky. You’re given a yellow warning sign when something is about to fall and you should move out of that column. The biggest challenge is remembering which warning sign appeared first when they start popping up quickly in a row so that you can dodge the correct direction in order. 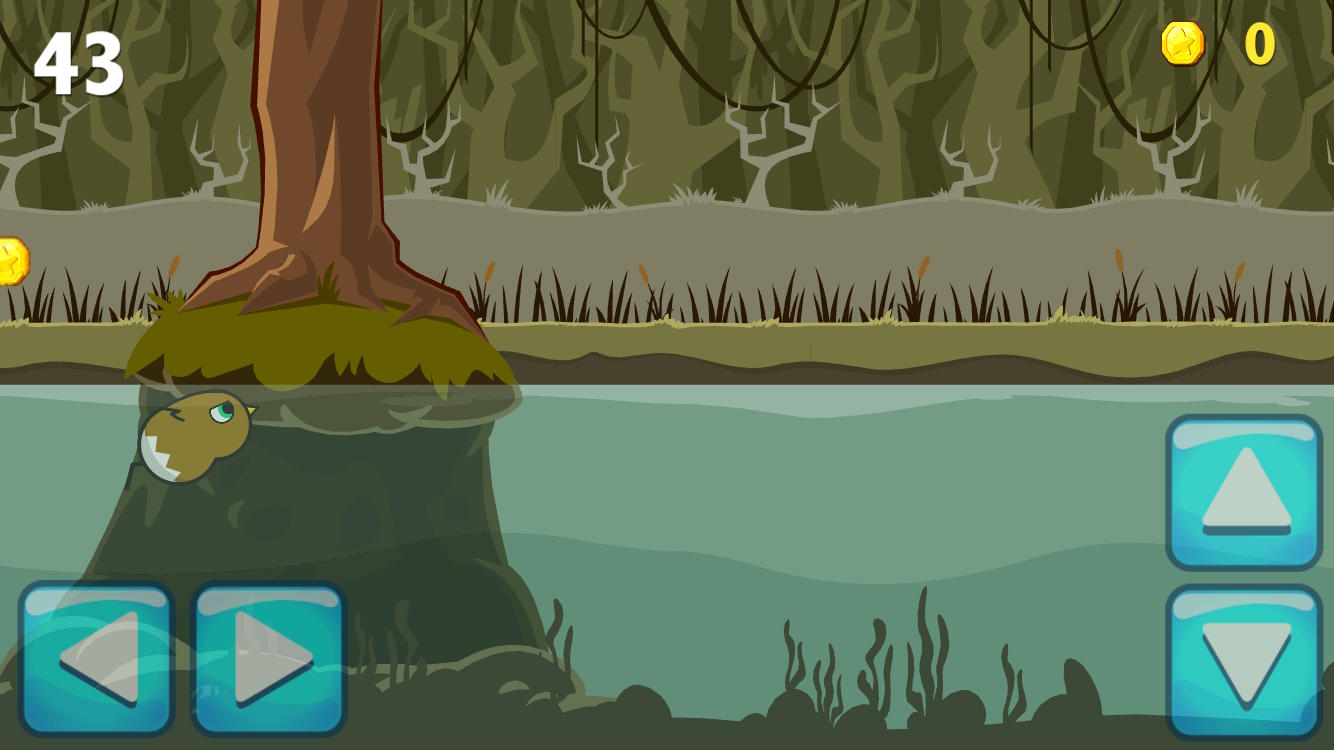 Swimming: Game #1, jumping over or diving under obstacles. Swimming 2 requires you to choose up or down to avoid incoming objects as you swim through a swamp, but it’s extremely forgiving about hitting those objects. If you dive under a patch of ground, you can hit the floor of the swamp or the bottom of the ground without being impacted. If you jump over a log, you can land on the log and you’ll just keep going. You need to use the left and right buttons near the beginning to jump farther, but once the game speeds up around the 80-point mark, just move your duck all the way to the left and focus on jumping or diving. 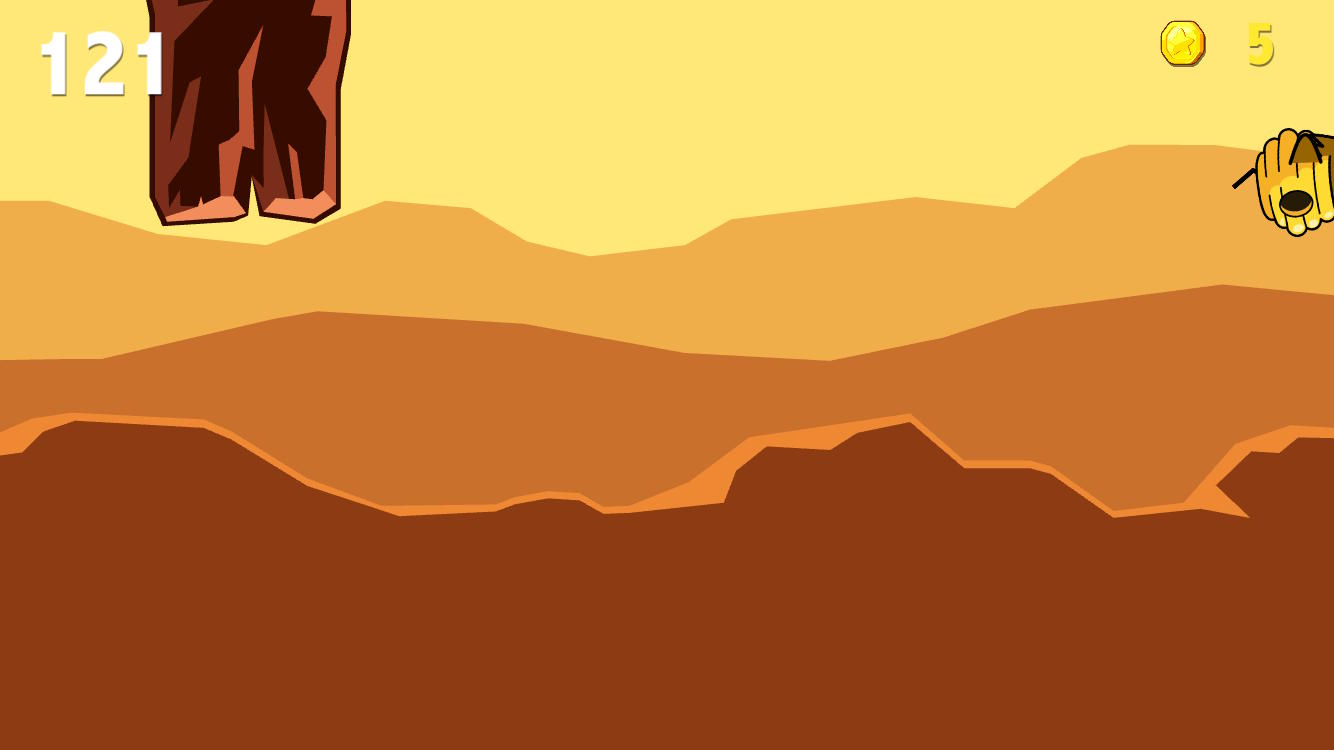 Flying: Game #4, flying through gaps in rocks. You should be able to get 150+ points in Flying 4 regularly with a specific tactic: place your finger directly on the duck and drag it to the far right side of the screen, a little below the center. Whenever he hits something, it doesn’t instantly kill him but merely holds him back. When this happens, just drag your finger up or down until he clears the obstacle and ricochets back to the right side of the screen where your finger is. Don’t ever lift your finger off the screen. You’ll need to drag up or down quickly as the game speeds up, but a lot of obstacles will be cleared automatically just by staying near the vertical center. 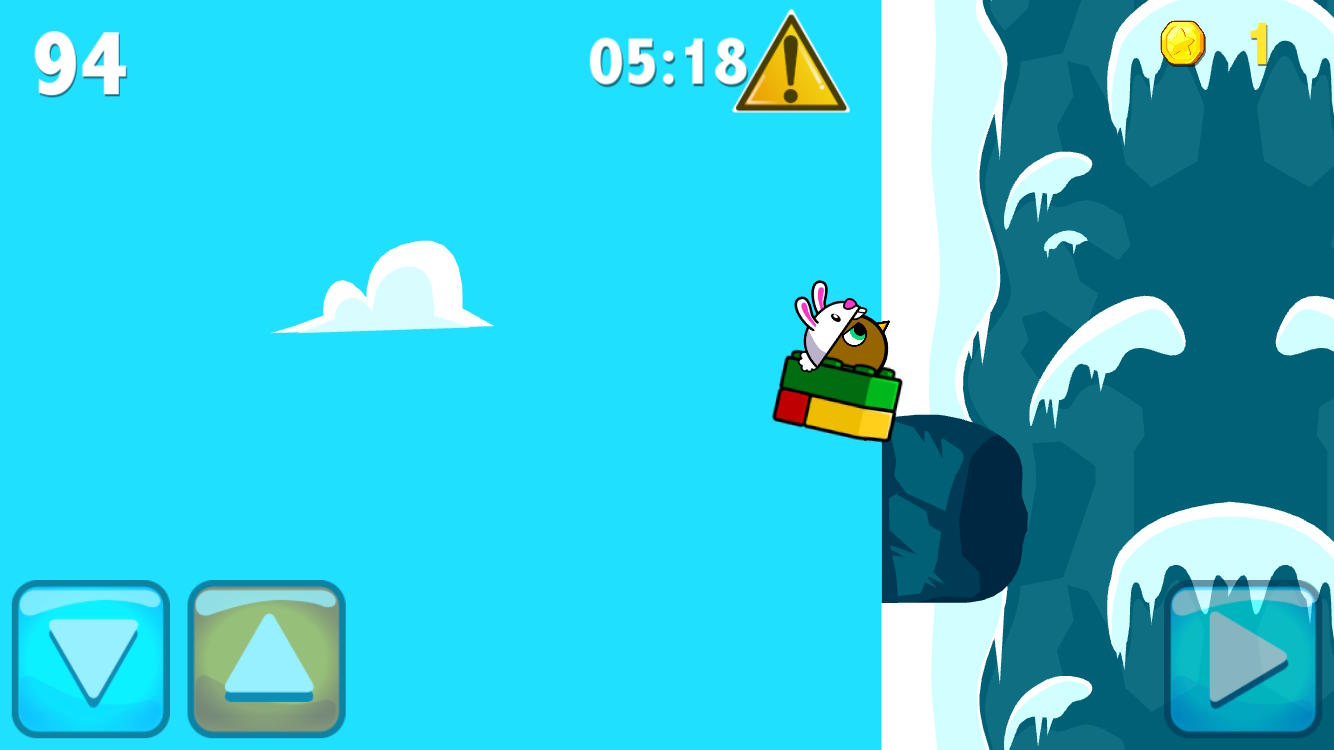 Climbing: Game #2, climbing the mountain and dodging avalanches. The avalanche warning is somewhat random, so you will sometimes get a game with tons of avalanches in a row. But, just as often, you should come across games of Climbing 2 that have only two or three avalanches the entire time. Once the avalanche warning pops up on the screen, you have about six seconds before the snow actually falls on you. Use the timer to track how much longer you have until you need to duck in a cave and maximize your climbing time before that. If you’re near the end of the run, with six seconds or less remaining, just keep climbing since the timer will run out before the avalanche hits. 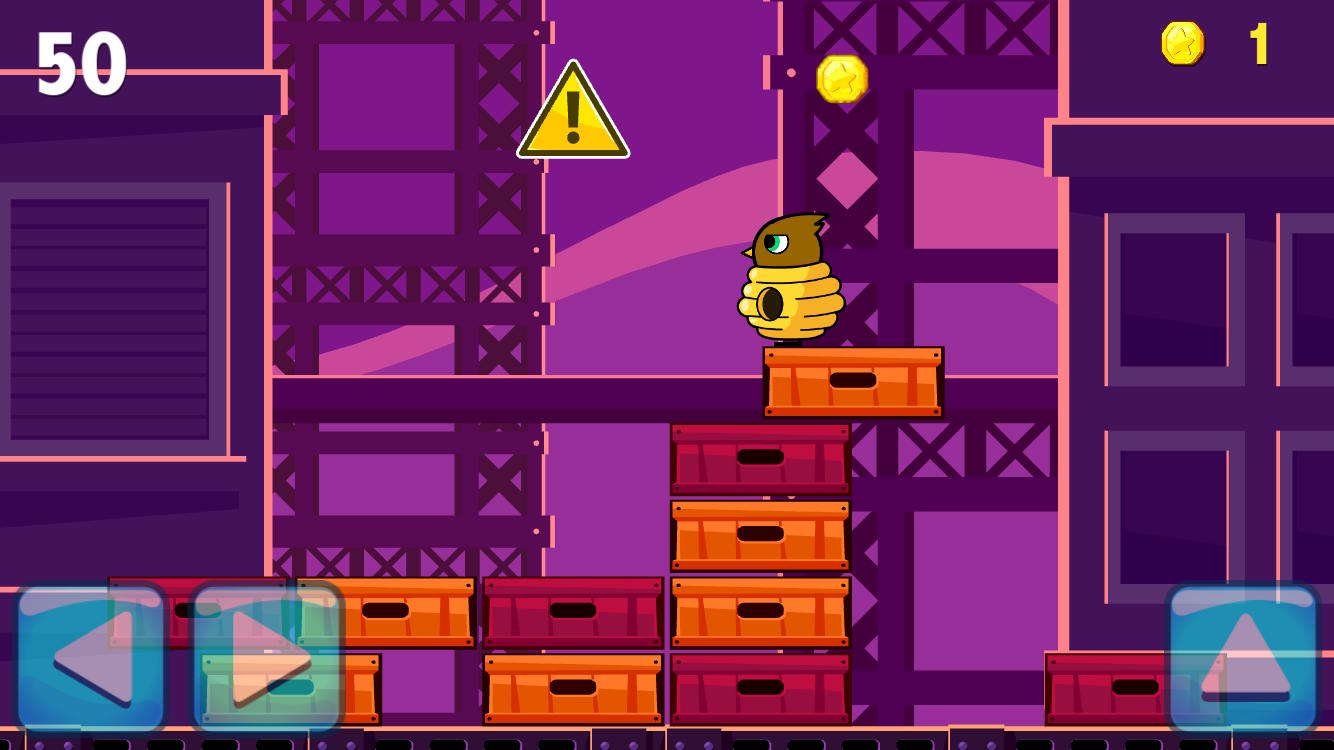 Jumping: Game #1, jumping up falling stacks of blocks. If you’ve mastered Running 2, you should be able to do well in Jumping 1 as well. They’re similar games—dodging falling obstacles from above—except in Jumping 1 you’ll need to climb the blocks as they fall so you remain on screen. Prioritize climbing the right side of the blocks over the left: they usually stack highest and first, so it’s easier to stay at a safe height on the right side. The yellow warning icon is about the same width as the blocks themselves—which fall directly straight down from the warning—so use those as guidelines for where to stand. If you’re just left or right of the yellow icon, you should be safe. 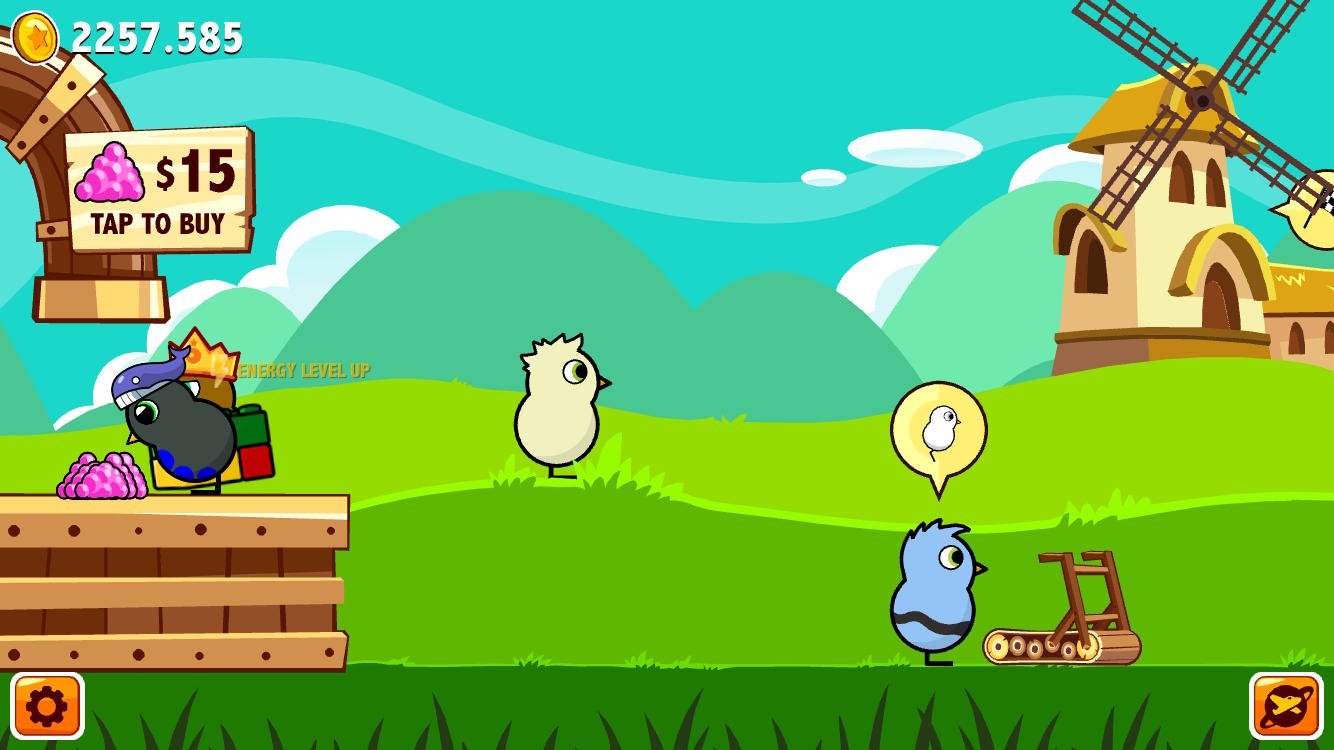 You earn coins in-game two ways: by collecting them during training games or by winning non-tournament races. Don’t bother collecting coins during training: races are much more lucrative and often picking up coins while training will result in getting hit by something. If you need more coins, just replay a solo race you’ve already won. You’ll get 60 coins every time you win (or 100 coins if it’s a race you’re less qualified for, like a swimming race when you have low swimming skill). The quickest and easiest race to bank coins on is the off-white duck in the Grasslands, just left of the running trainer.

Coins are used for buying seed to feed your ducks, which increases their energy level. Energy is the one skill you don’t improve through training games: simply buy seed by tapping the pink icon on the far left side of any area and then drag your duck up to the platform to eat. His energy level will increase by three for each seed eaten (this is a permanent increase which allows him to make it through longer races without getting tired). You can buy a bunch of seed at once by tapping repeatedly and your duck will just keep eating until it’s gone. If you have multiple ducks, you can buy multiple stacks of seed and drag them all onto the platform, and they will take turns eating. 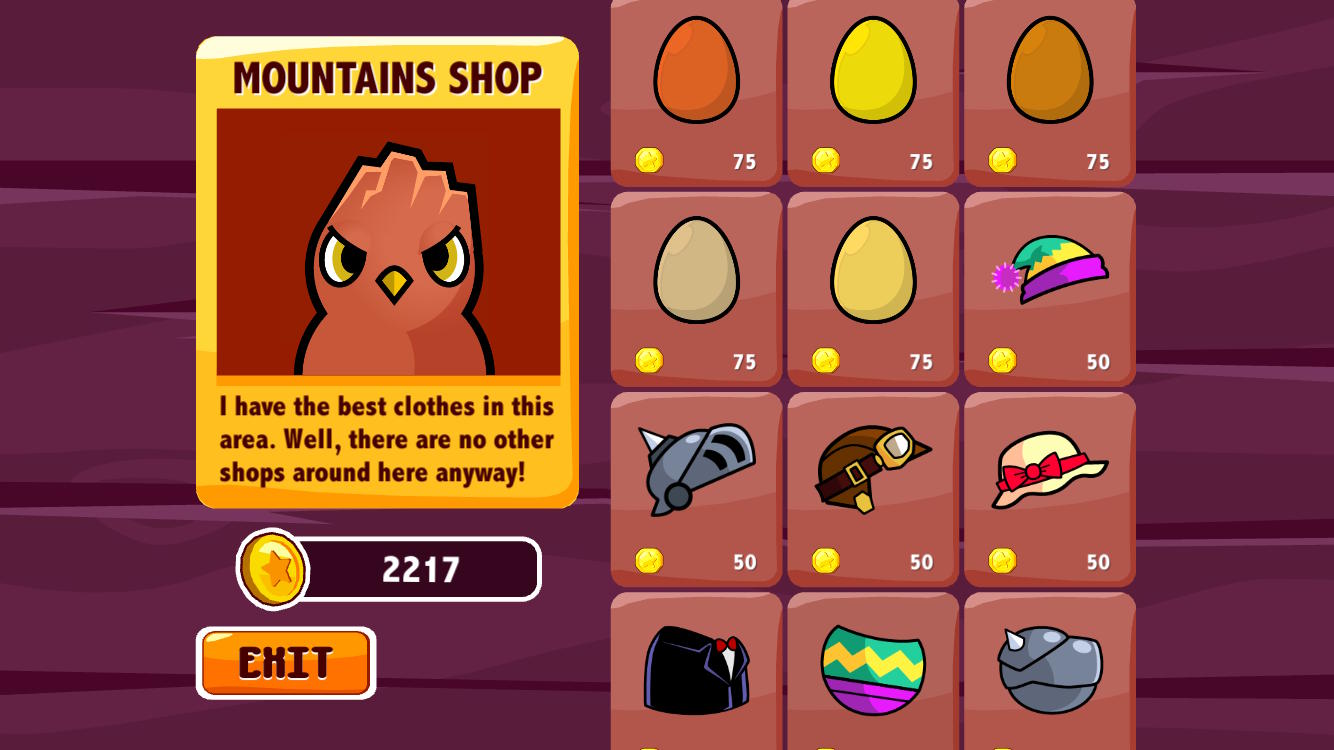 The other use for coins is buying items at shops. Each location has its own shop that offers hairstyles, additional ducks, hats, and shirts. The shops in each area sell different items, so if you want a specific type of hat or hairstyle, visit each shop and browse their inventory. The color of ducks available at a shop match its location, so the Grasslands shop has lots of green hues, Mountains has a lot of orange and yellow, etc.

There is no way to unequip a shirt from a duck once you give it to him, so be sure you like an outfit before buying. You can always buy a different shirt to replace it, but you can never have a “naked” duck again. Items are also duck-specific and not “owned,” so if you replace a duck’s shirt, the old shirt just sort of vanishes. (Although you can always return to the shop and buy it again.) You can take off a hat by buying a hairstyle for your duck: he’ll have the new hairstyle and no hat. There is a special item that unlocks once you “beat” the game: this item is only available in the shop in the final location, but you can buy as many of it as you like (and it’s free). 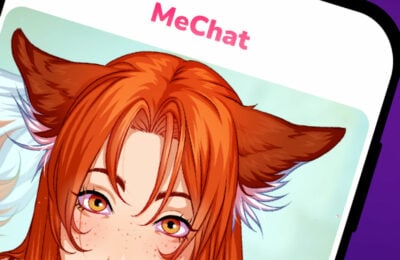