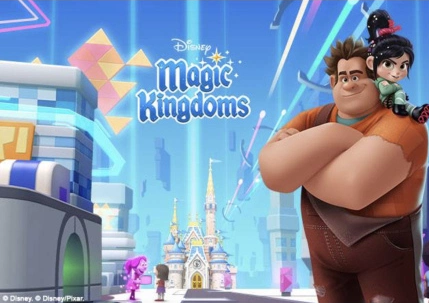 With the American premiere of Wreck-It Ralph already whizzing past us, it was only a matter of time before Disney Magic Kingdoms welcomed the man himself, plus a few of his friends too. Yes, the Wreck-It Ralph Event has already begun and we only have a month to get the most out of it. So sit back, relax and read on to find out what has already been added for this event and what is yet to come.

Below is a table featuring all the new characters added for the Disney Magic Kingdoms Wreck-It Ralph Event. Since most of the characters in the table haven’t been released yet, there is a chance the criteria to unlock the characters will change. This table will be updated when more information is available.

Throughout the event, there will be certain quests that last the duration of the event. The purpose of these quests is to earn a Wi-Fi Token, which is earned by defeating viruses inside your Kingdom. To defeat a virus you will need three Anti-Virus Chips and a Virus Tracker. The way to get the chips is to tap on the purple Pop-up Ads which spawn around your kingdom. You can earn a Virus Tracker from three different quests, but the one you can do right now is Goofy “Visit Mickey’s” 60 minutes. If you are feeling impatient, you can buy both these items if you can’t wait to pick them up yourself. 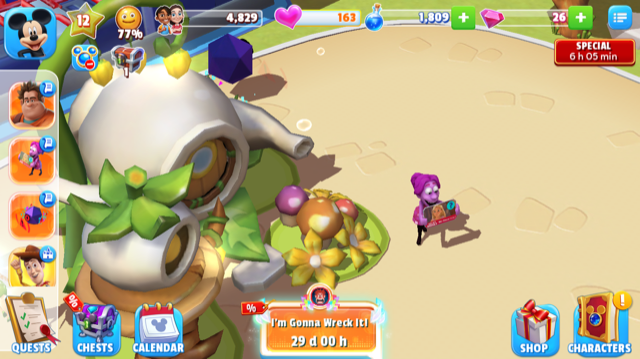 Although hard to spot, this little purple thing is a Pop-up Ad. So be on the lookout for five of these every hour. As of today, mini snow clouds are forming over your attractions, tapping these clouds will also reward you with event currency.

If you didn’t notice in the table above, you will have the chance to get your hands on four different princesses. The reason being, that each of the four princesses will receive a new costume throughout the event. The names of the costumes and their release dates are as follows; 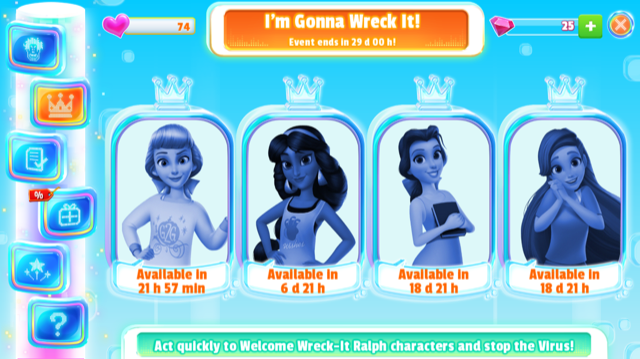 There are several new attractions coming throughout this event. The exact details of what is required to build each attraction are still not 100% confirmed, but I would guess these predictions will not be far off. 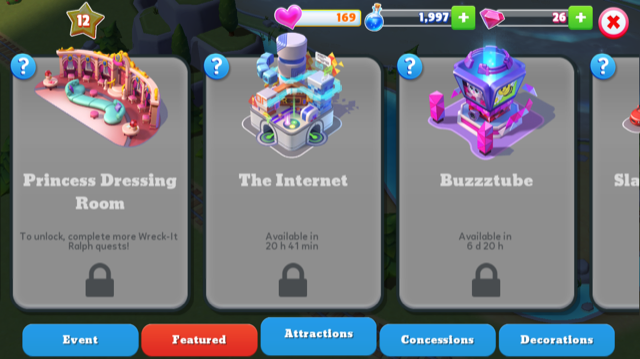 The Parade Float that will be added is a Wreck-It Ralph themed premium float available for 50 gems. There will also be three new concessions added, one of which is available right now for 60 gems. Not all details have been released about the other two concessions, so keep your eyes peeled for more.

When does the event start?

The latest Disney Magic Kingdoms event has actually already started. If you have noticed no changes in your game, you might be too early in the story. To unlock events, you must have unlocked Mickey’s pirate costume as we as the California Screamin roller coaster. The California Screamin’ rollercoaster is the giant red coaster with a massive golden Mickey emblem on top located on the right side of the map.

What characters do I level during this event? 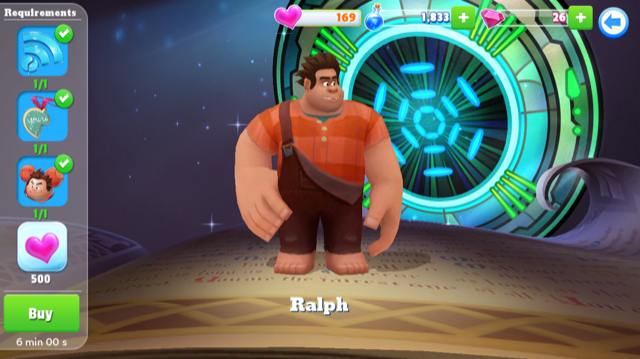 What happens to the characters I miss?

Well, you have missed them. When the event ends, that’s it, no more free chances to get these characters. So do your best to unlock them and welcome them into the park before the event ends. In previous events, if your new character isn’t welcomed before the end of the event then they disappear. So if you are trying to rush in a few at the end, use gems to guarantee it will keep them.

Yes, stockpile the event tokens while you can. Once the event is over, you won’t be able to earn them so it is good to have a surplus. Event Currency is worthless after the event and is converted into gems. The conversion rate is lousy so either stockpile loads or spend it all (2000 event currency = 1 gem). Remember to play a lot. I am sure most of you check your kingdom several times a day, but the more you play the more you earn. Going days or weeks without playing will ensure you won’t be able to achieve most items in the event. So play regularly, check for new releases and have fun out there.

My Tamagotchi Forever: How to Unlock Mohitamatchi