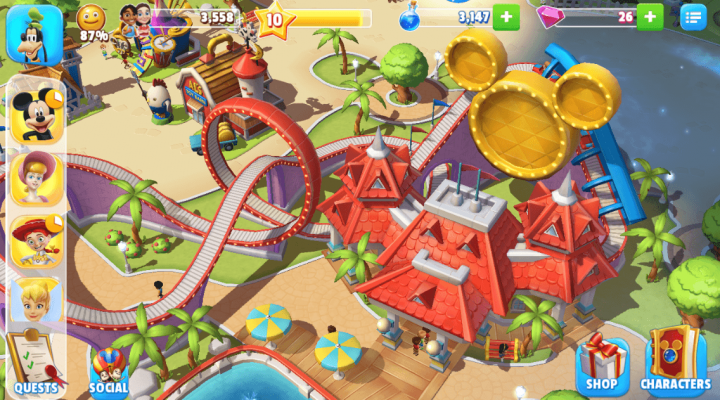 If you’ve ever been to Disneyland or Walt Disney World and decided that despite all the fun you were having, the place would be even better if Disney let you rearrange things yourself? Sadly, the House of Mouse will never let you do that, but Disney Magic Kingdoms from Gameloft is pretty much the next best thing.

It’s not a strict builder in the sense that you can just start throwing down real Disney Parks attractions anywhere you please, but that’s okay since there’s an interesting story and plenty of authentic Disney and Pixar characters populating your own kingdom. Reclaiming it from the darkness will take a while, but if you study up on our Disney Magic Kingdoms tips, cheats and strategies, you’ll be able to build a better, happier place that’s just the way you envision it.

A Song of Magic and Gems 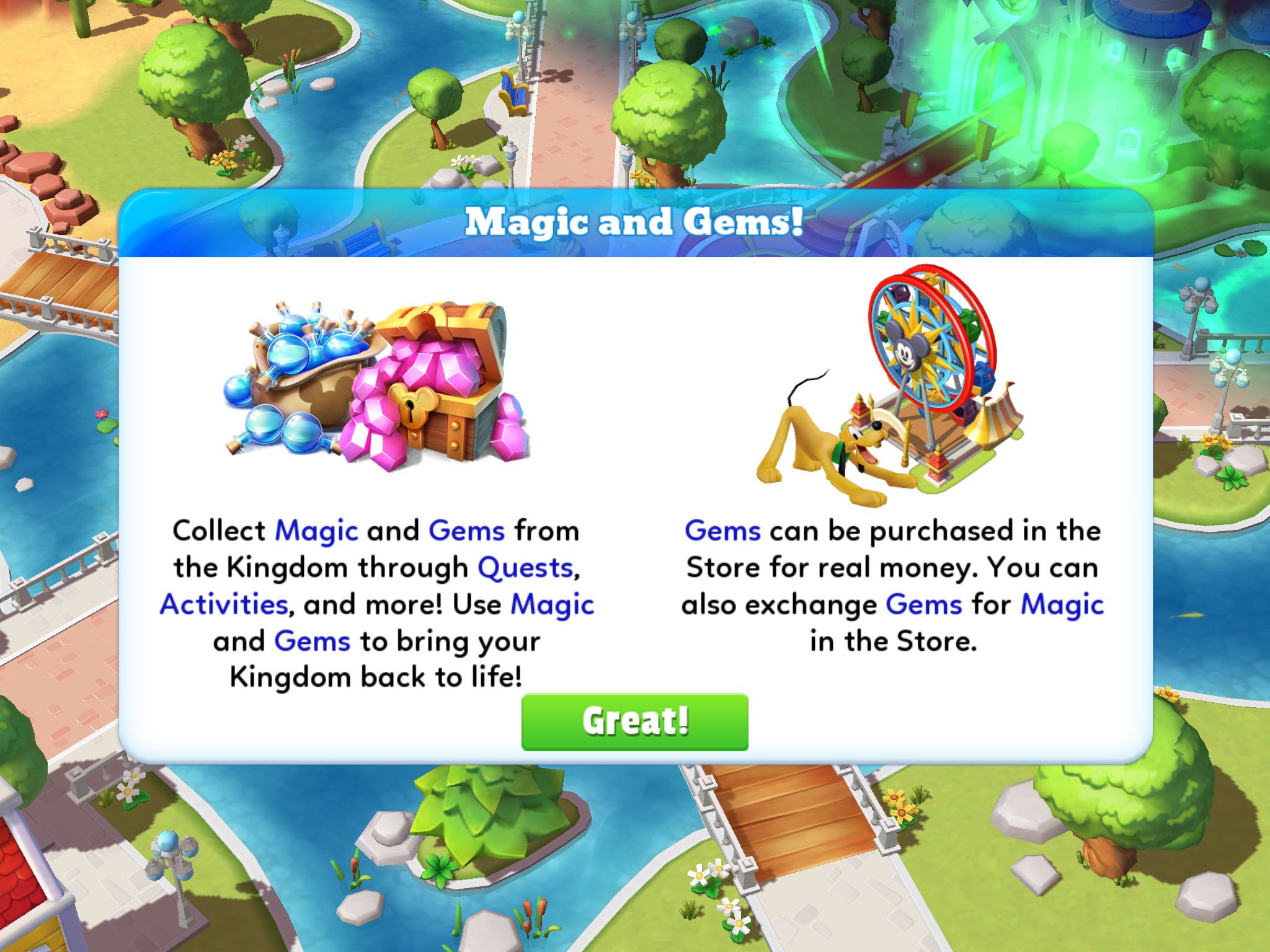 Other mobile games have currencies of all kind, but only Disney Magic Kingdoms operates on pure Magic. And apparently, Magic is a blue liquid. Good to know.

Jokes aside, Magic is the primary currency and thus what you’ll need to build most attractions, concessions stands and decorations. Most buildings that you place will generate specific amounts of Magic over time, but you can also collect more by completing quests, having characters perform random actions, visiting other players’ kingdoms, watching in-game videos or buying more with Gems.

“Ah, but what are Gems?” you might reasonably ask. Gems are the game’s hard currency. You’ll need them to buy certain premium buildings and speed up tasks. Leveling up and watching videos can earn you Gems slowly, but the only way to acquire them in larger quantities is to buy them with real money.

One Task at a Time 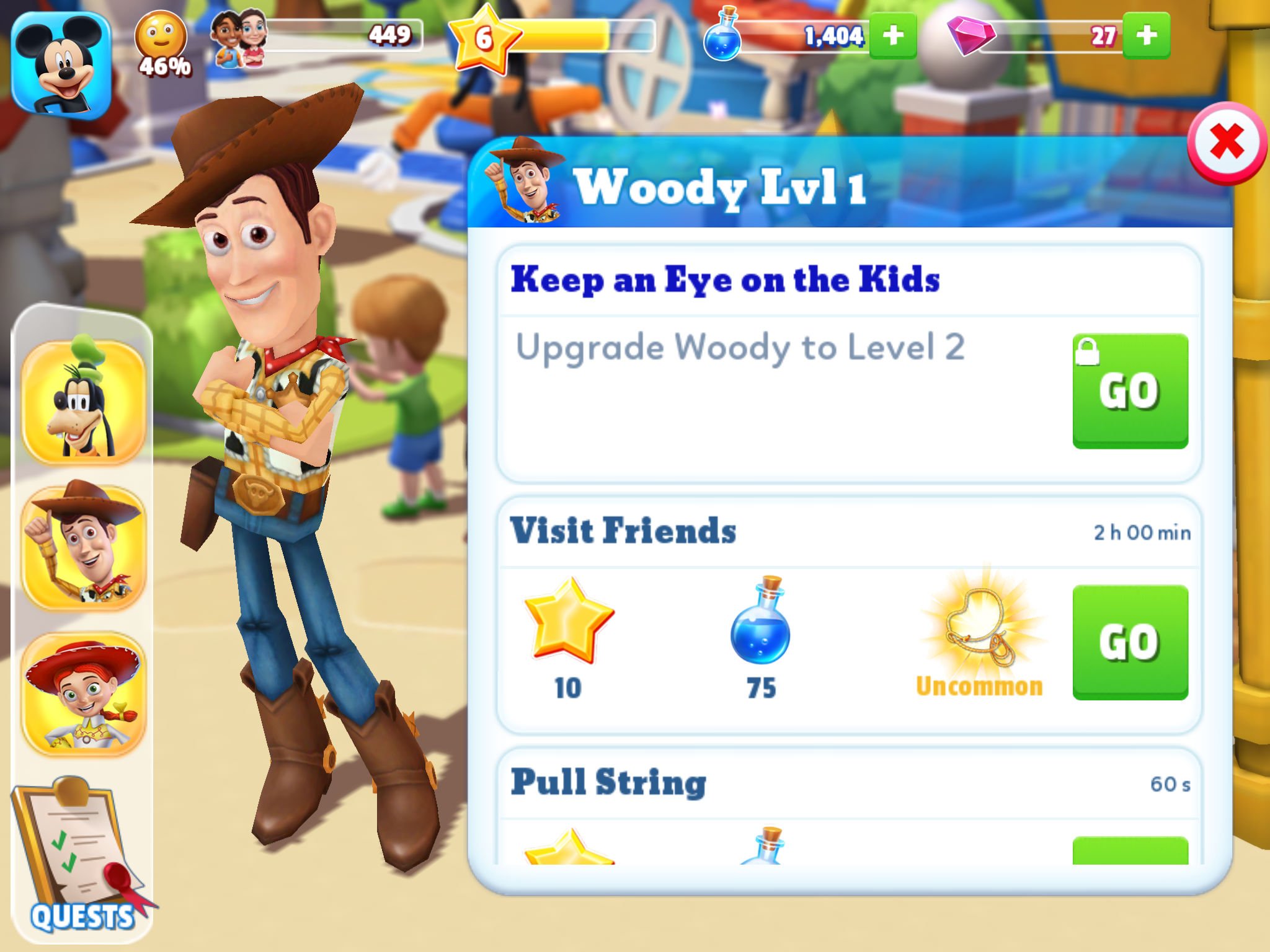 Most of the time, you’ll be using the characters you unlock in Disney Magic Kingdoms to complete tasks to help you complete the quests you’ll find by tapping on the checklist icon in the bottom-left corner of the screen. However, you can also tap on the icon in the upper-left corner of the screen or simply find and tap any character not already busy doing something in your park to open a list of actions you can assign to them.

It’s fine to give them a random task, because even if it’s not one you need for a current quest, doing so will earn you experience points, Magic, and in some cases, items you need to collect to unlock or level up characters. The thing to remember is that each character can only perform one action at a time. The action will tell you how much time it takes to complete, and once its started, the only way to speed it up is to spend Gems to finish it instantly.

That’s important to remember as we segue into our next topic, which is … 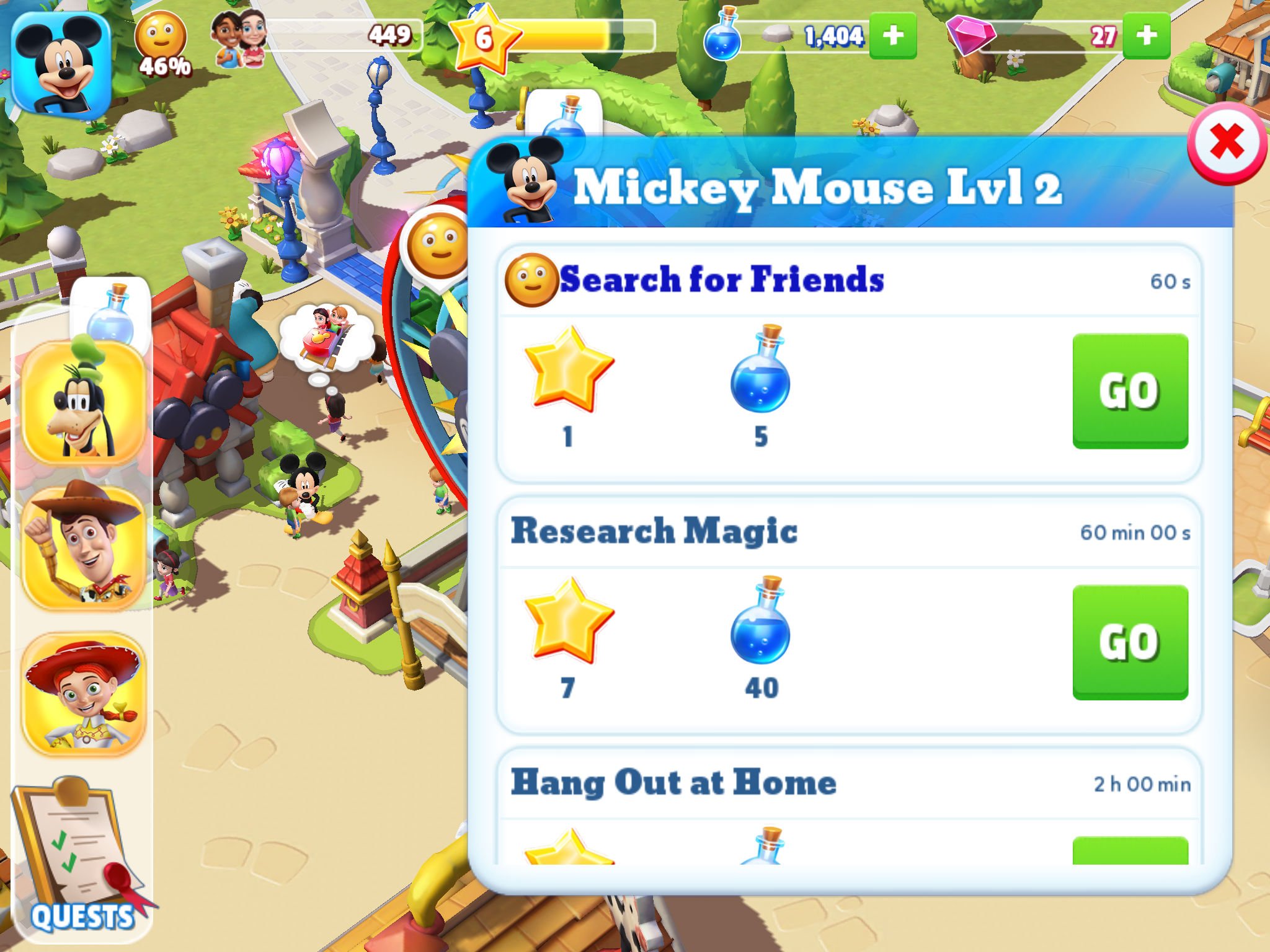 The portion of Disney Magic Kingdoms that is an amusement park simulator revolves around granting wishes to increase the Happiness level of your park. Doing so couldn’t be easier; simply scroll around until you find a guest with a thought bubble. If the bubble has a roller coaster icon inside, tapping on it will send the guest to an attraction, and once they’re finished (which should take only a few seconds), you can collect their Happiness by tapping on the smiley face icon that pops out.

If the bubble has a character inside, that means the guest wants to interact with that specific character. Tapping on it will bring up a menu that shows you exactly which action to perform to earn the Happiness — as well as the normal rewards you’d earn.

Again, the only trick here is that the character you need might be busy. If Mickey Mouse has been assigned an action that will take two hours to complete, he wont be able to grant any wishes for those two hours either. In real life, this would likely produce Sadness, the opposite currency from Happiness, but fortunately there’s no such thing in the game. 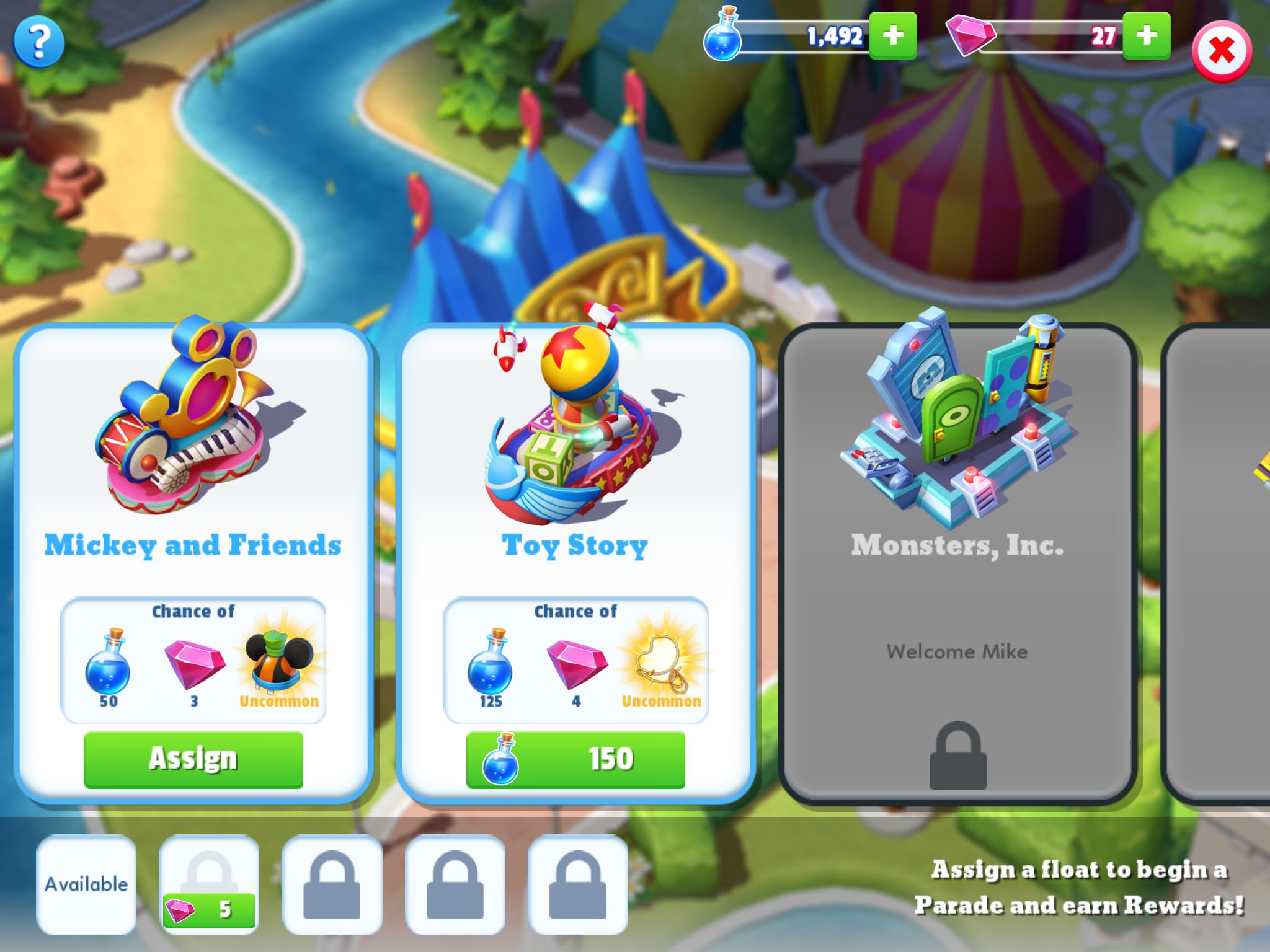 Why should you care about Happiness? Besides what it says about you as a person, collecting enough to fill the meter to 100 percent — it also looks like a smiley face and is at the top of the screen — you can start a parade that launches from a gate on the left-hand side of your screen. Parades produce rewards and make any actions you perform while they are in progress yield more Magic than usual. Plus they just look cool rolling through your park, though you can only send them out once per day.

The Care and Feeding of Characters 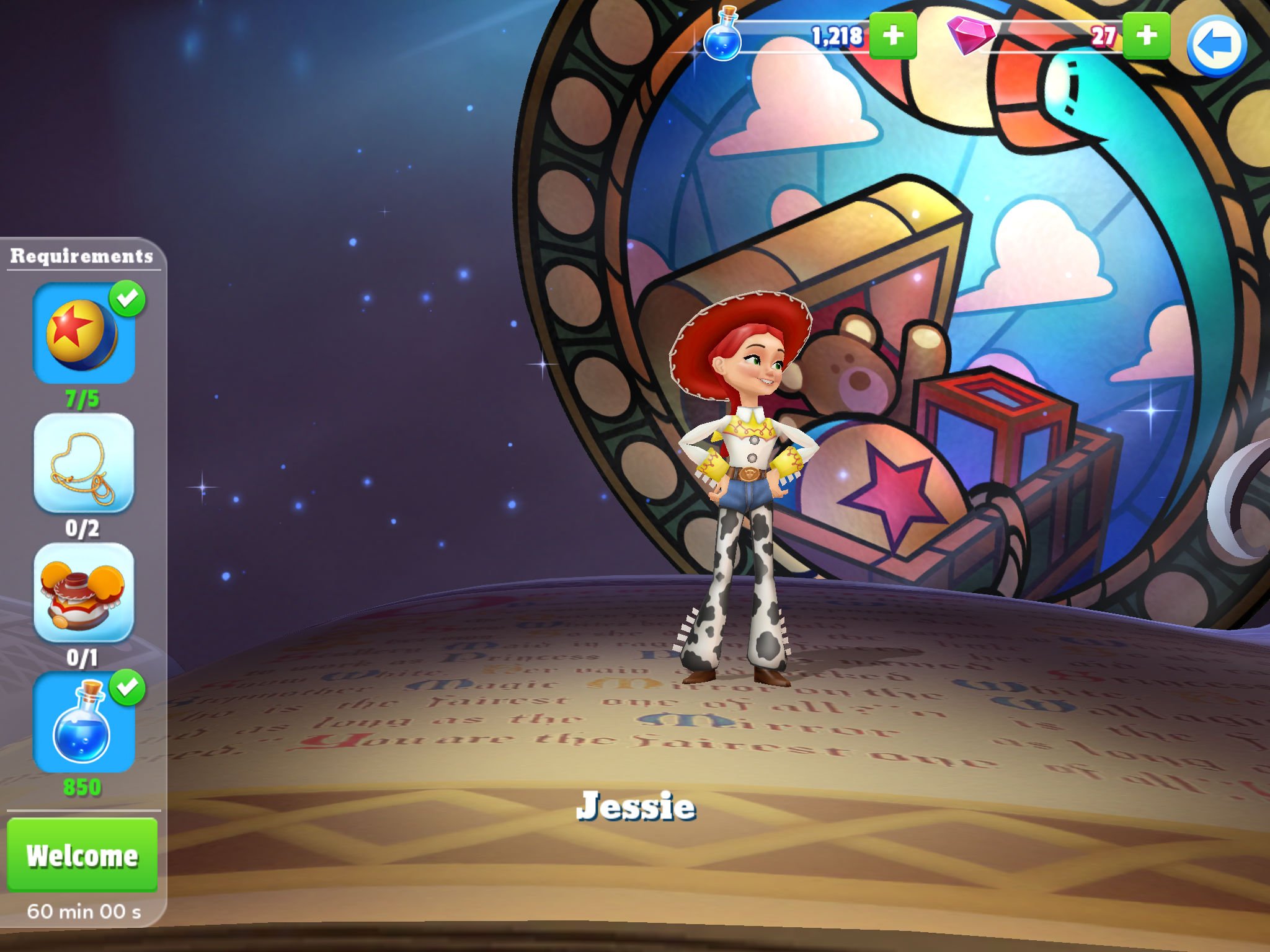 Your park won’t be complete without as many Disney and Pixar characters as you can round up. More characters equals more actions that you can perform at any given time, so you should always be thinking about adding more.

Tapping the “Characters” icon in the bottom-right corner will bring up a menu of all the characters in the game so far, organized by property: Mickey and Friends, Toy Story, WALL-E, etc. Tapping on any character will bring up either a message that informs you what quests you’ll need to complete to gain access to them or a list of items you need to unlock them.

For characters you already own, that same list will reflect what you need in order to level up that character, which will unlock more actions and increased rewards. You’ll notice pretty quickly that more than one character might require the same item, so you may be forced with a choice between unlocking a new character or leveling up an existing one. The choice is yours, but it’s important to remember that more characters = more actions you can do at once, including lengthy ones you can set to be done while you sleep or are otherwise away from the game for an extended period of time. For that reason, we’d lean toward increasing the size of your roster. 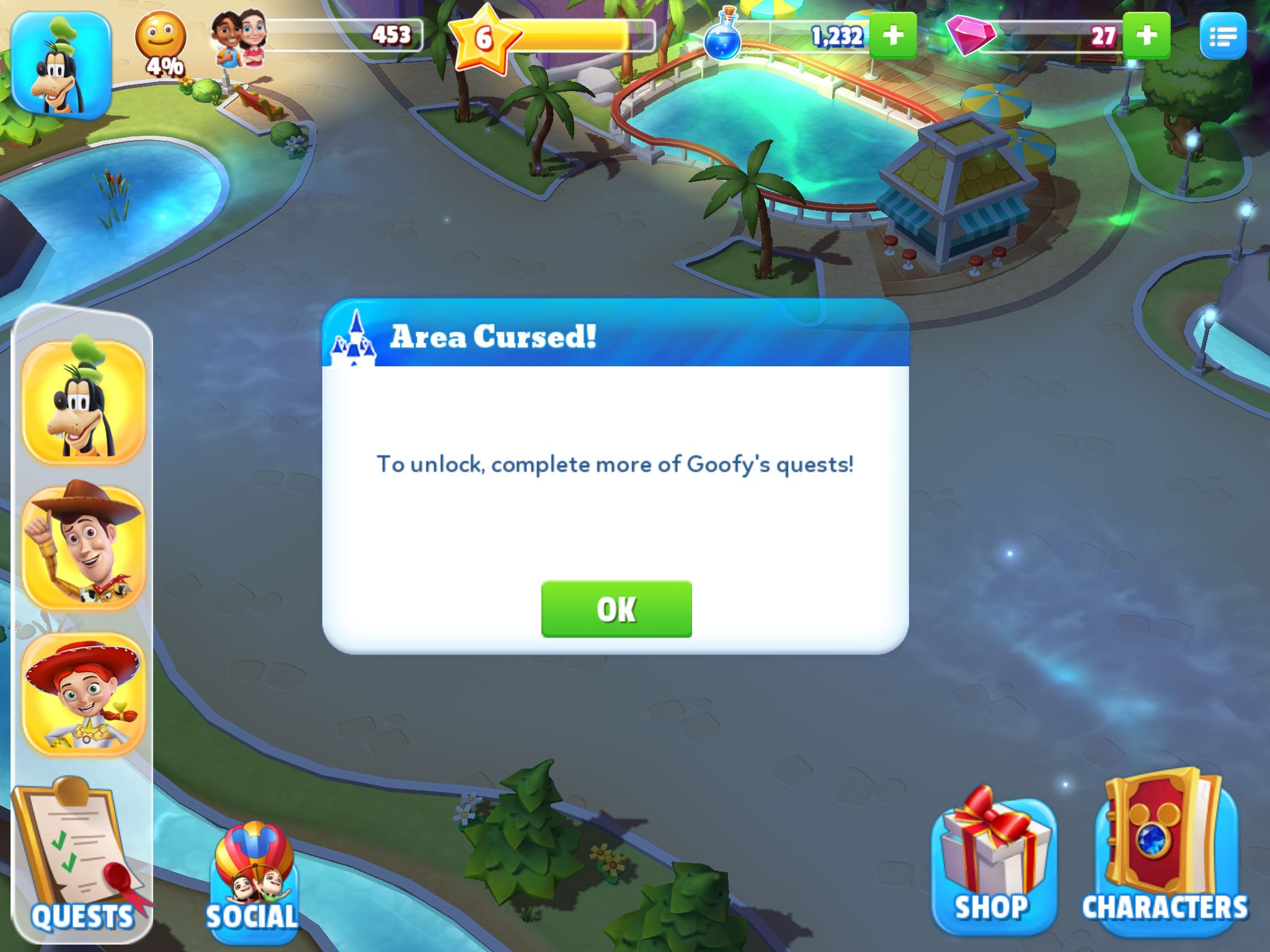 One of the few real bummers of Disney Magic Kingdoms is that you have a limited amount of space to work with in the early stages of the game. That makes it crucial that you unlock more areas of the park by rolling back the darkness, which is why completing the quests is so important.

Tapping on areas still under the shadow of Maleficent will give you some guidance on exactly what quests to complete to banish the curse in that particular area. It’ll take quite bit of Magic to get the job done, but trust us, it’s Magic well spent.