Disney Magic Kingdoms: How to Get More Gems for Free 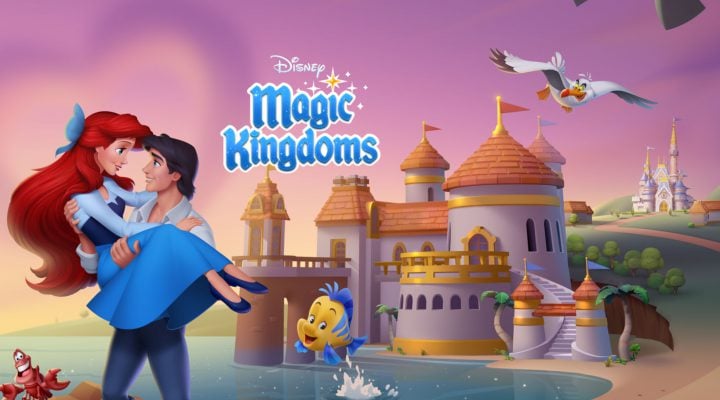 It can be pretty expensive to journey to the Disney Parks in real life to make your dreams come to life, but it doesn’t have to be that way in Disney Magic Kingdoms. In fact, pretty much everything you do while constructing your own theme park can be done for free. That’s if you’re willing to wait around for a while … sometimes a long while. To get the most out of the game without waiting, you need to get your hands on some Gems.

Gems can speed past the wait on a number of different activities, including character tasks and collect times for your attractions. You can also use Gems to purchase items you haven’t found yet that are necessary to welcome new characters, or buy special chests in the in-game store. Put simply, Gems make your life easier, and while you can get more by paying real money for them, you definitely don’t have to go that route.

It just so happens that we know a handful of ways to get free Gems that can either serve as your main source or supplement the ones you choose to buy. Let’s run through them now so you’ll be able to stock up next time you play Disney Magic Kingdoms. 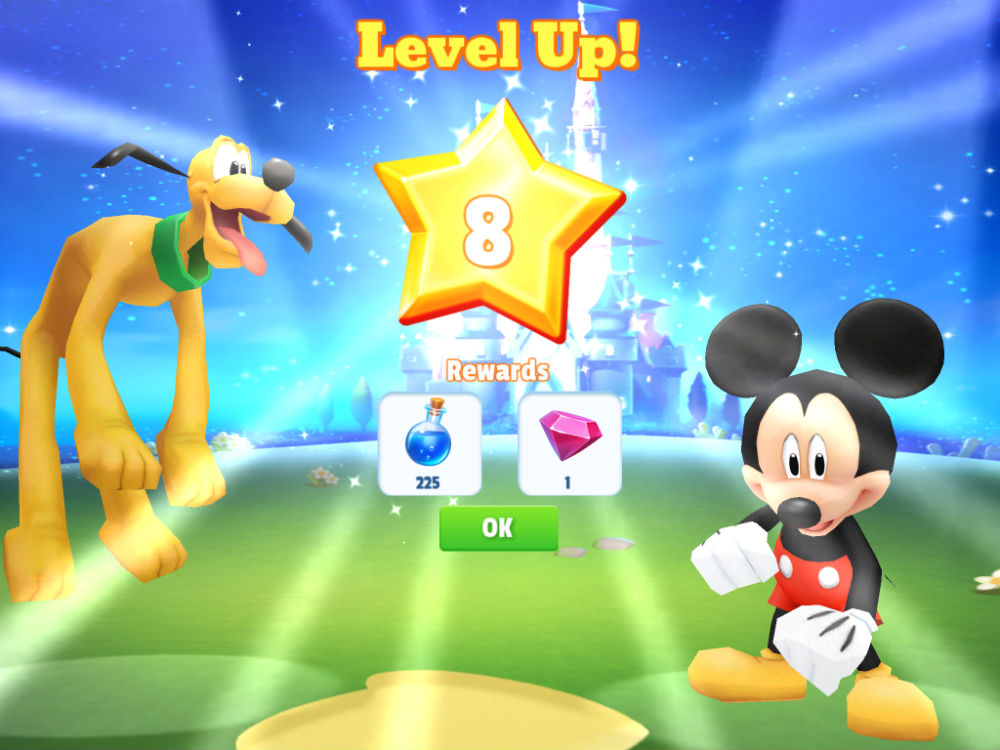 Everything you do in Disney Magic Kingdoms will earn you stars that go toward advancing your profile level. You can see exactly how close you are to the next level by looking at the star icon in the upper-left corner of the main game screen. The closer the star is to being full, the closer you are to leveling up.

Each time you hit a new level, you’ll receive both Magic and Gems. Since you’re constantly working on your next level, this is one way to earn Gems that you’ll barely even have to think about. 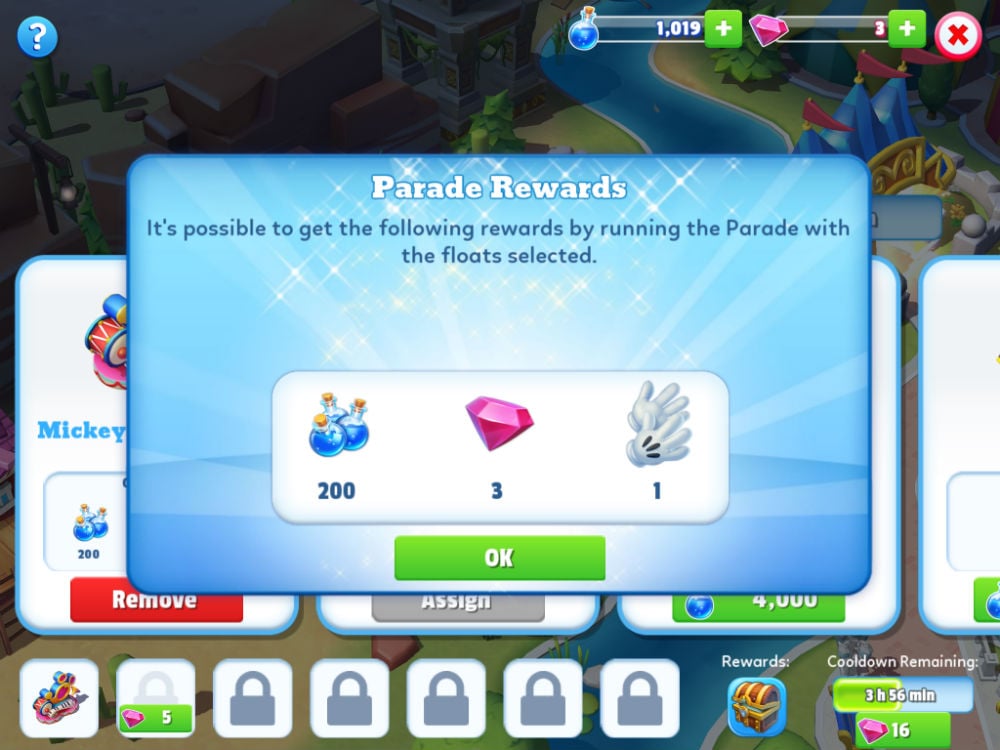 Who doesn’t love a parade? In this case, the answer should be “no one,” because every float in any parade you run in Disney Magic Kingdoms offers the chance to yield some Gems, among other helpful rewards.

When you first start out, you’ll only be able to launch a parade with one float at a time, but you’ll gradually be able to unlock more floats with Magic and have the ability to put more than one of them in any parade by spending a few Gems.

Level Up Your Characters

Welcoming characters to your park is just the beginning. Once you’ve unlocked any Disney Magic Kingdoms character, you can continue to make them better by leveling them up. Every time you do, they’ll give you a few Gems, so be sure to hit the ‘Characters’ button every so often (the game will often prompt you with an exclamation mark when there’s something new to check out) and see how close you are to having enough items to level up a character or two. 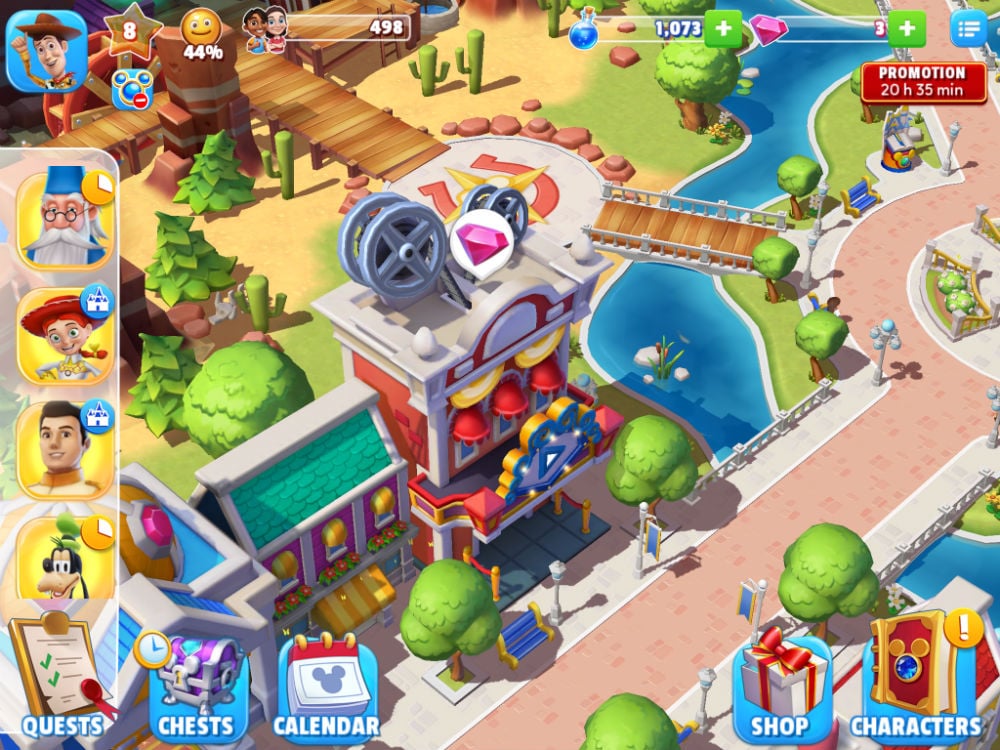 In-game ads certainly aren’t the most fun thing in the world, but ads you choose to watch yourself are a little more palatable. On Main Street, you can do exactly that several times a day and be rewarded with a Gem or two. Tap on the building with the Gem floating above it and the film projector decoration and you’ll be able to watch a video. Free Gems don’t get much easier than that.

Along with other goodies like chests and characters, you can unearth some Gems just by logging in daily. If you tap on the ‘Calendar’ icon at the bottom of the main screen, you’ll see not only how many days you’ve logged in during the current month, but also how many consecutive days you’ve logged in and how long it will be until your next reward is available.

You can’t tell what you’ll be getting for a daily reward, but rest assured that some of them will indeed turn out to be Gems.

We won’t say you’ll never be tempted to buy any Gems ever again since all of these methods earn them pretty slowly, but at least you know you have some options. Be sure to read our general Disney Magic Kingdoms tips and hints for many more helpful tidbits. Until next time, have a magical day!

PUBG Mobile Ranking System: Your Guide to Getting to the Top