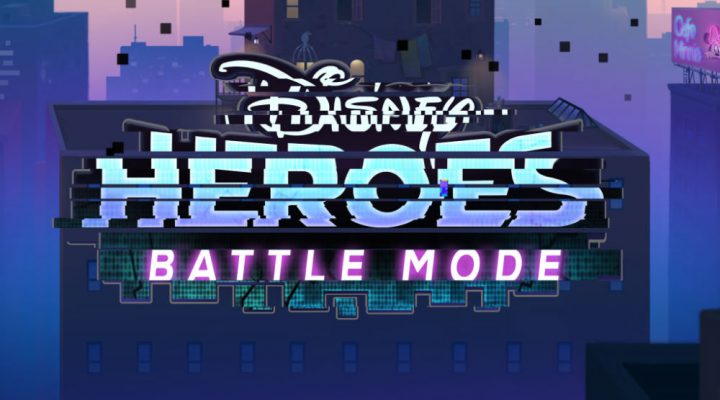 Some ideas for mobile games are so obvious that when they finally arrive, you end up somewhat surprised they hadn’t happened before. That’s definitely the case with Disney Heroes: Battle Mode, a strategy RPG that has players build teams of five heroes from various beloved Disney and Pixar films and has them battle corrupted versions of other heroes, and, of course, teams put together by other human opponents.

It’s similar in a lot of ways to Star Wars: Galaxy of Heroes, except that its battles take place in real time, making combat easier and probably simpler for younger gamers, yet still requiring you to stay on your toes for best results. Disney Heroes also has a wide variety of game modes that unlock as you advance, ensuring that there’s plenty to do if and when you decide to play regularly.

Intrigued? Well, don’t take our word for it. Or rather do, because we have a lot more to say as we lay out our Disney Heroes: Battle Mode tips and tricks, which should help you get better faster.

How combat works in Disney Heroes

You’ve put together a pretty sweet team of five heroes, and now they’re ready for battle. What’s next?

You’ll probably be happy to know that for the most part, your characters will fight for themselves. Every character has a basic attack, and later, one or more special skill they will perform automatically. There’s no guidance or control needed on your part. 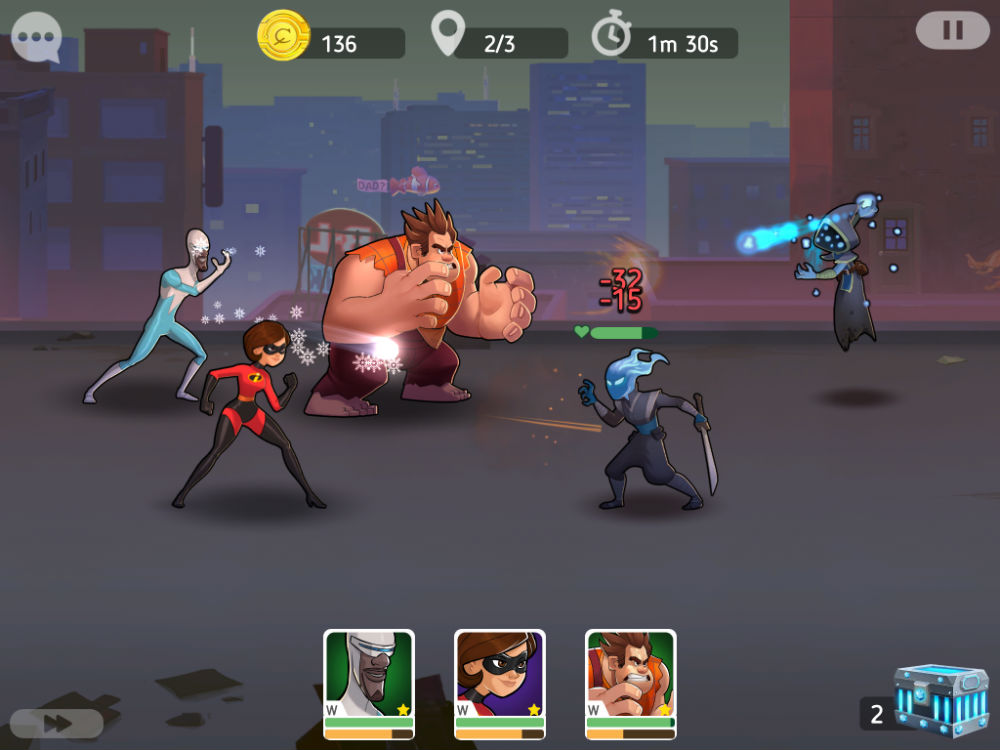 However, that doesn’t mean you can be completely hands off (unless you want to be, as many game modes support use of the ‘Auto’ button in the lower-right corner that will automate combat completely). Each hero also has a signature skill that is on a cooldown timer depicted by a bar below their health in their icon at the bottom of the game screen. Once that bar fills up, the icon will flash, and you can activate the skill by tapping on it. Mr. Incredible, for instance, has his Grand Slam skill where he dives into multiple enemies, damaging them all.

Each battle is then a fight to the finish, ending either when your team is defeated, your opponents have all fallen, or time expires. It’s a simple system that everyone should be able to get a handle on pretty quickly.

How to get more heroes in Disney Heroes

It’s not much fun to play a game with as many different characters as this one without knowing how to unlock more of them. The first place to start is by opening crates, conveniently located by tapping on the ‘CRATES’ structure on the main game screen. There you’ll find a variety of gacha-style containers that can be purchased with either the game’s basic (gold) or premium (Diamonds) currencies. 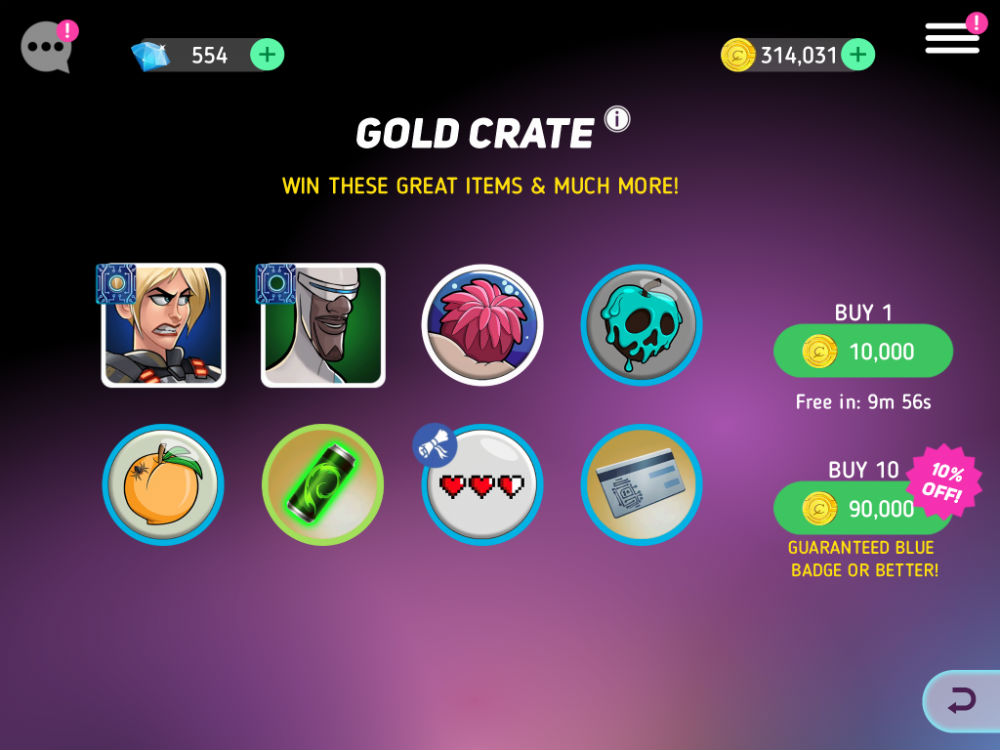 The one you’ll be most interested is the Diamond Crate, as that can instantly unlock new heroes when you open one. If you can save up the 2,590 Diamonds needed, buying 10 at one time is the way to go, since it guarantees you’ll get a new hero.

Other crates reward you with either Badges, which are needed to make your heroes stronger, or Hero Chips, the Disney Heroes equivalent to shards from other strategy RPGs. Collecting enough Hero Chips will allow you to either add a new hero to your roster or advance one you already own to the next tier, and they can be won in the Elite difficulty setting of Campaign battles as well as earned as rewards for logging in daily and earning medals for cumulative tasks.

Bonus tip: You can open up to five Gold Crates a day for free, so don’t forget to do so and potentially grab some free Hero Chips.

Step inside the Arena

Though Disney Heroes has more game modes than you might expect for a new game, the Arena mode is one where you’ll definitely want to focus some of your time. It’s the asynchronous PvP mode, where you pick your best team of five characters and battle against teams assembled by other players. The fights are full-auto, so your heroes are completely on their own.

That means the most important thing in choosing an Arena opponent is gauging both the composition of the team you want to fight and their overall power, which you can see simply by scrolling up and down the list of available battles. You can challenge anyone in your current league, but the idea is to make it into the upper rankings so you can advance to the next tier of league play. 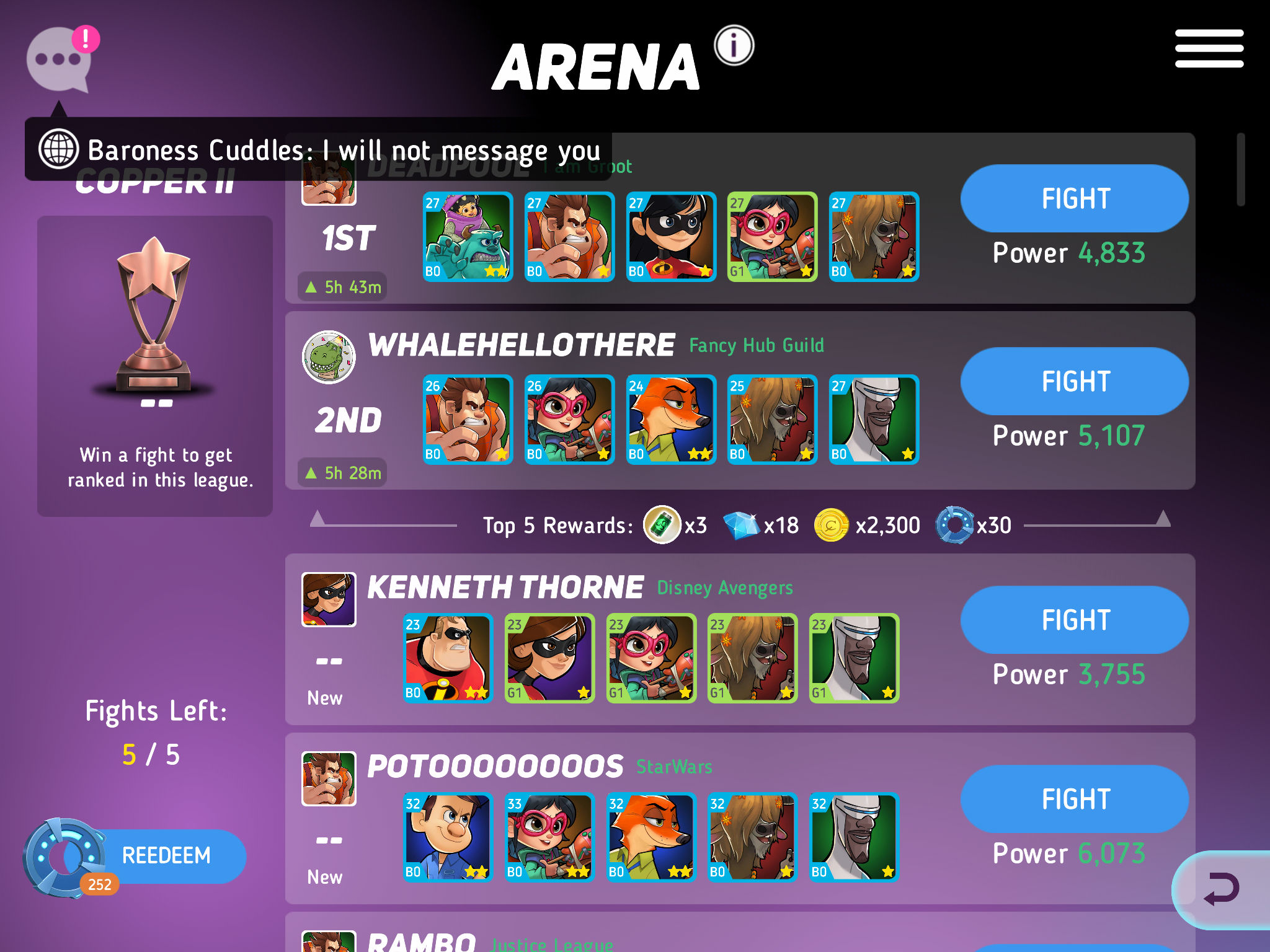 Once a day while active in Arena play, you’ll receive rewards based on your current tier and your place within your league. It’s a great way to gain extra Diamonds, gold and XP drinks, so there’s no reason not to play in the Arena.

Bonus tip: Don’t forget to set your Arena Defense team as well by tapping on the green ‘DEFENSE’ button in the league rankings list. This will let you pick which five heroes other players face when they challenge you.