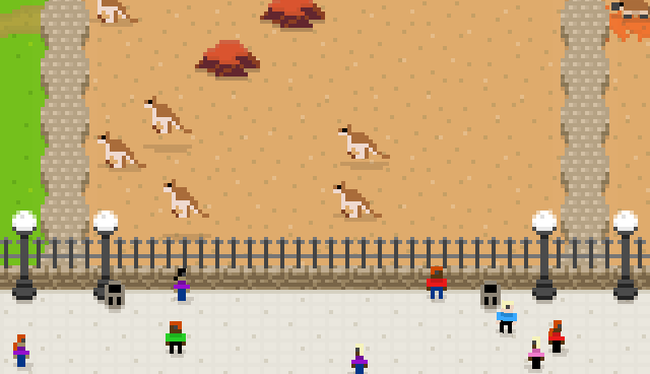 Disco Zoo is a time/resource management game from NimbleBit. In this game, you rescue animals and place them in your very own zoo. When the mood strikes you, you can throw a party and double your earnings. Gamezebo’s walkthrough will provide you with some tips and hints to help you get a good start on getting along with your party animals. 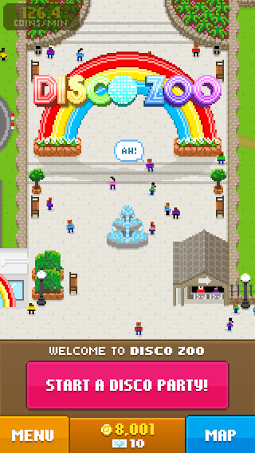 Level up your animals – Found one animal? Hurrah! But your quest for an awesome zoo doesn’t end there. You need to find five of the same animal in order for that animal to gain a level. The higher your animals’ levels, the more coins they earn per minute, and the longer they can stay awake (you don’t earn money from your animals when they’re asleep).

Write down animal patterns (if you don’t want to pay for them) – Rescuing animals makes up a good deal of Disco Zoo‘s gameplay. Finding a single animal piece won’t net you the whole animal, however: You need to find three or more of the same piece, depending on the creature.

Luckily, every animal adheres to a pattern, and when you have that pattern memorized, finding the critter within your allotted number of moves should be a piece of cake. If your memory isn’t up to snuff, try drawing the animal patterns for future reference. Alternatively, you can pay $2.99 for a zoo almanac that reveals each animal’s pattern.

Give finding priority to rare animals – If you don’t have enough moves to rescue all the animals on a field, try to give priority to any rare animals up for grabs. The opportunity to capture rare animals doesn’t come up very frequently. Rare animals also earn more coins and stay awake longer than common animals. 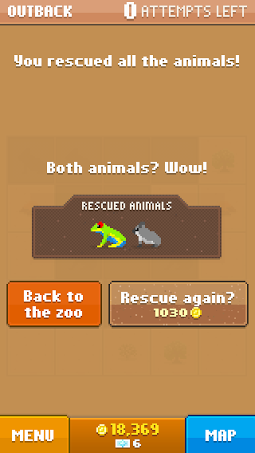 Save your DiscoBux for mythical animal hunts – Once in a blue moon you’ll have the opportunity to capture a mythical animal. Since mythical animals come up even less often than rare animals, this is a good time to use DiscoBux and buy additional moves as necessary.

Save your DiscoBux for discos, too (that’s what they’re for!) – Don’t sling your DiscoBux around too freely, however: You need those funds to throw mad parties with. No DiscoBux, no disco. As tempting as it may be to buy additional moves when you’re one piece away from netting a common animal (especially if you’re in a new, unfamiliar area), save your cash.

Putting the game down for a while? Throw a party first – Going to bed? That doesn’t mean your animals should have to. Discos double your animals’ earnings for a set time, and they also reset the animals’ sleep counters. That way, your critters will stay awake for as long as possible before you play with them next. A one-minute disco costs a single DiscoBux and is highly beneficial. 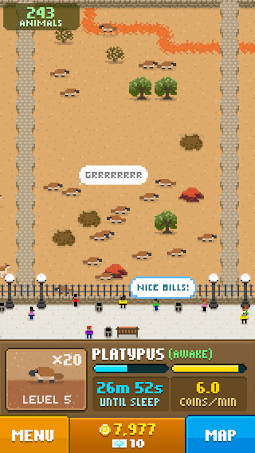 Keep an eye out for tips – As you scroll through your enclosures, happy patrons may tip you with coins. Most of your tips are in small denominations, but it’s not too unusual to receive 100 coins, 1,000 coins, or even a DiscoBux. Farming for tips is a good way to pass the time while you’re waiting for an animal to fall asleep so you can jab them awake again.

Listen for tips, too – When visitors throw a tip, you’ll hear a golden “ting!” sound. Pay attention to this sound if you’re scrolling through your enclosures quickly. Tips remain on the ground for a few seconds, so you have a period of grace to go backwards and retrieve the money.

Escaped animal? Find them for big rewards – Once in a while, a few of your rabbits may lose their minds and decide to hang out with the crocodiles. The zookeeper will let you know when an animal has escaped. Find them for a big cash reward, or for DiscoBux. The rogue animal can be hard to spot if it’s hiding with similarly-colored animals, but an exclamation mark will pop over the runaway’s head as you scroll through the enclosures. Keep a sharp eye out for it.

The farm level offers free animal patterns – It’s easy to build up your farm animals’ levels because you’re allowed to consult their patterns whenever you like. It’s a good way to net a lot of high earners like horses, cows, and unicorns relatively early in the game.