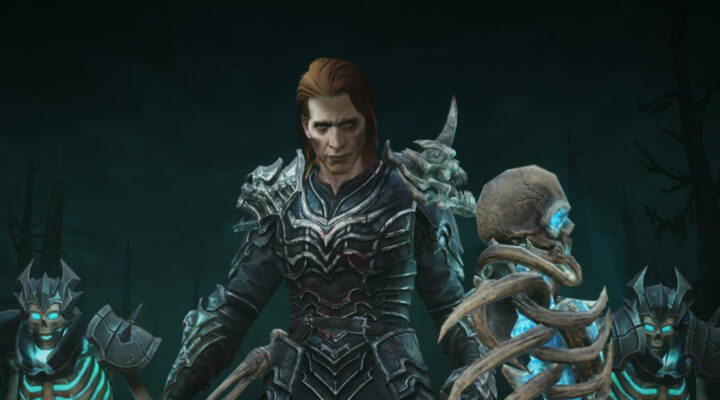 Not sure of the best Diablo Immortal Necromancer build? Well, you’ve come to the right place. In this guide, we’re going to help you put together an absolute beast of an undead magician. What? That’s basically what they are! Anyway, that includes the best Skills, Gems, Item Sets, and more. By the time you’re done reading, you’ll likely have thrown out your previous build entirely.

Diablo Immortal is Activision Blizzard’s latest entry in the long-running action RPG series. It’s entirely free-to-play, and trades the lonesome single player shenanigans for a full-blown MMORPG experience. You explore a series of maps as one of several different Diablo classes, killing monsters, collecting all of the loot, and levelling up to increase your power. Aside from the always-on nature, it should prove a very familiar – and comfortable – experience to those who love the franchise.

Right, we’ll get straight into our recommended Diablo Immortal Necromancer build to help those who’ve found this page and just want answers. We’ve split our build recommendations into PVE, PVP, and Rifts to help you change up your playstyle depending on the circumstance.

Here’s our choice for primary attack and ultimate skill for PVE Necromancer in Diablo Immortal:

Why Soulfire? Well, there’s no real competition between the two choices for Necromancer in PVE. Soulfire just deals damage to more enemies at once, and is, therefore, a no brainer when you’re pretty much facing down swarms constantly.

Save Hungering Soulfire for boss encounters, as it will absolutely melt minions that bosses tend to summon, keeping you safe and providing some corpses to explode. More on that later.

Now, here are the choices of secondary skills that we recommend for Necromancer in PVE:

Command Skeletons is a Diablo Immortal Necromancer staple, and shouldn’t really need an explanation. You likely play a Necromancer because you want to summon the undead, and that’s exactly what this skill provides: four skeletal warriors that deal decent damage and can shield you from attack. Not only that, but you can increase their damage temporarily against difficult foes using the active ability, and generate corpses to help you spam Corpse Explosion.

Corpse Explosion is the bread and butter of this build. Absolutely spam it as often as you see a corpse to keep the AOE damage coming.

Bone Armor allows you to get into the thick of it to safely use Grim Scythe each time it’s off-cooldown, as well as provides you with a team support option.

All of those abilities combine to give you the perfect balance of insane AOE offence with defensive options that will keep you out of trouble.

Now, let’s take a look at your equipment. While levelling up, we recommend that you just use the best item that drops, but, eventually, you’re going to want to use Legendary Equipment. Why? Well, not only does it typically provide you with much higher stat boosts, but it also completely changes, or buffs, one of your skills to customise their usage for your needs.

Here are the Legendary Equipment items that we recommend:

Our Legendary Equipment choices are pretty self-explanatory: increase the damage of Corpse Explosion. That’s pretty much the focus here – make it so that Corpse Explosion hits hard and at a wider radius so we can spam it for insane AOE damage.

Coals For Eyes effectively gives us a secondary Corpse Explosion, and it synergises nicely with The Prong, which decreases the cooldown and skeleton raise time of Command Skeletons.

We recommend using the Issatar Imbued set items, as it gives you a boost in damage and movement speed, as well as providing you with a floating orb that deals AOE damage.

Here’s where to get each piece:

And here are the set bonuses:

Now, let’s take a look at our recommended legendary gems:

Given the gacha nature of gem drops, we’ve decided to recommend a bunch of them – all of which will help improve your combat ability. Chained Death, Pain of Subjugation, and Fervent Fang are incredible at boosting your AOE damage, while Power & Command improves damage across the board.

Now, for regular gems. These are the three that we would prioritise for this build:

These are self-explanatory. Tourmaline and Sapphire provide you with a boost to your damage, while Citrine helps with your Chill/Freeze application.

But that’s going to do it for our Diablo Immortal Necromancer build guide. Make sure to grab the game via the links at the top of this page, check out our related guides in paragraph three, and bookmark this page to keep an eye out for new builds.