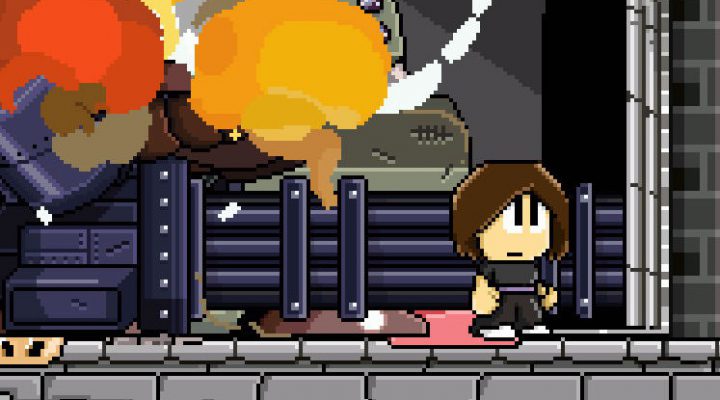 It’s time to unleash the fury. Unleash it in Dan The Man, that is, the delightfully retro action-platformer from Halfbrick that delivers more fun for free than anyone has a right to expect.

At its core, the game is all about beating the snot out of tons of enemies by any means necessary. You’re a one-man — or one-woman, if you choose to play as Josie — wrecking crew, and the simple controls mean that anyone can start laying a whooping on the bad guys without much trouble.

That said, those bad guys are numerous and much more heavily armed than you. A little help might not be a bad thing, and since no one is coming to bail you out in the game, we figured we’d lend a hand from out here in the real world. Said help comes in the form of these Dan The Man Tips, Cheats and Strategies. Read up and you’re bound to take your retro hand-to-hand combat skills to a whole new level, one that you’ll definitely need in order to pass all of Level 8. 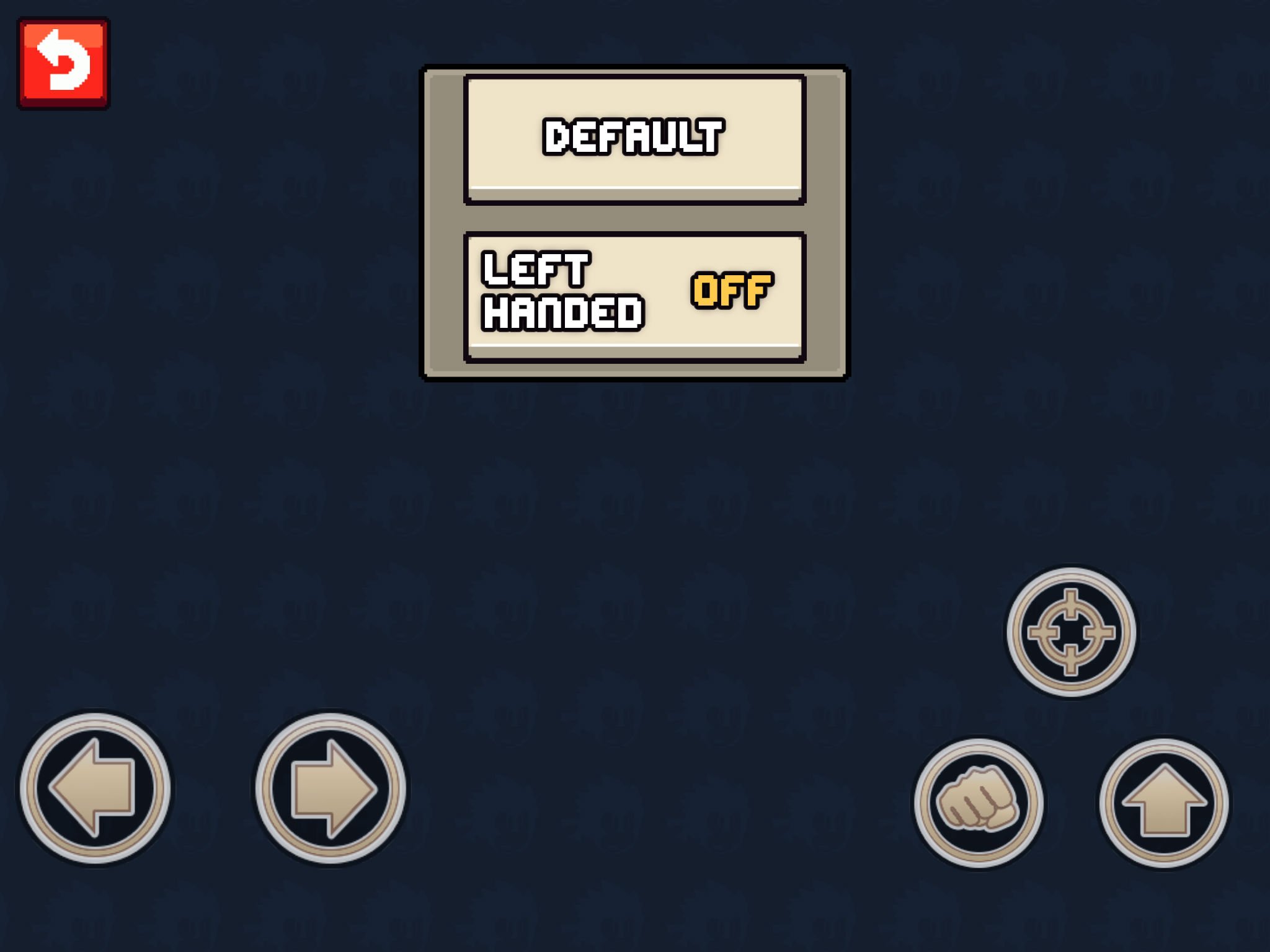 The controls in Dan The Man are as basic as possible, giving you just enough buttons to do everything you need. Arrow buttons in the bottom-left corner move your character left or right. Three buttons on the right are for everything else: the fist is for melee attacks, the crosshairs is for throwing or shooting when you have the right weapons, and the up arrow is for jumping. Simplicity rules here.

For you southpaws out there, you can swap the buttons from one side of the screen to the other. Simply tap the gear icon in the bottom-right corner of the main menu to open the Options menu, then tap on ‘Controls.’ Tap the ‘Left Handed’ button and you’re good to go.

You’ll find that the buttons are sensitive enough that you only need to tap each one once to do something, though you’ve got to hold the arrows down to keep moving. The only button you’ll need to mash is the attack button, as enemies take multiple punches or kicks before they’re out of the fight, and you can string together combos by tapping repeatedly. 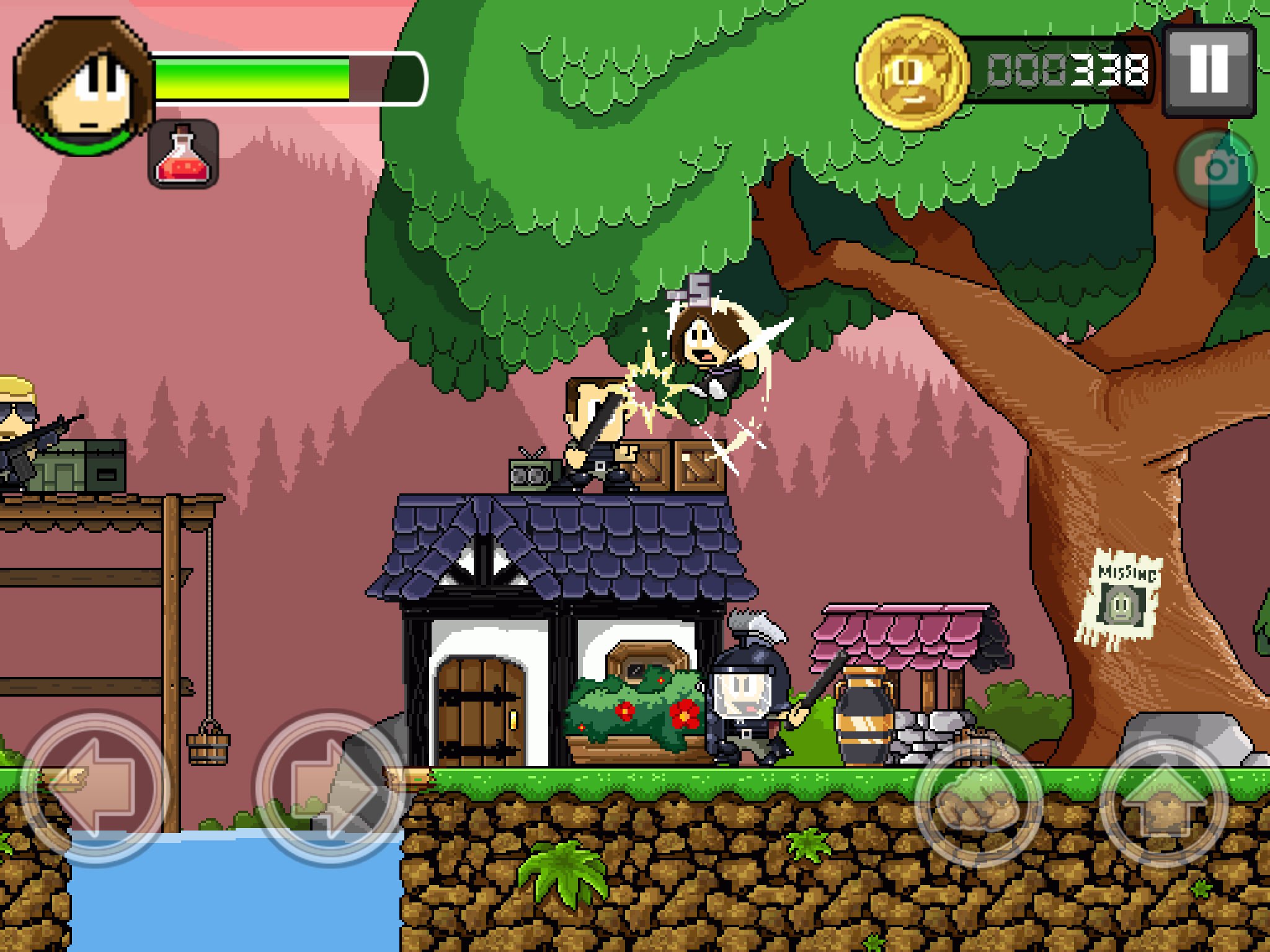 There are very few tough outs in Dan The Man, and by that we mean that almost every enemy can be a challenge. When they attack in numbers, you almost always have a real fight on your hands.

The danger in most of the game’s many enemies is that they are armed to the teeth with things like nightsticks and semi-automatic weapons, or that they have some method to make just wailing away on them not so effective — like the guys who carry big riot shields. But no matter which character you use, you have one huge advantage: mobility.

An easy way to avoid taking it on the chin in Dan The Man is not to stay in one place for too long. Against groups of enemies, you want to get off a few shots or a combo and then jump. That gives the enemies little time to respond, and you’ll find that they are often swinging or shooting where you were instead of where you are. You can also attack from the air, whereas many of the bad guys can’t deal with you up there.

Alas, not all of the enemies are intellectually challenged, and some of them armed with firearms will be content to shoot at you from a distance. In those cases, it’s wise to use your limited supply of throwing or shooting weapons (assuming you have some at the time) to take them out. Always fight where it’s more advantageous to you, unless you just want to see how many punches and kicks you can throw while completely outnumbered. In that case, just hammer the attack button and go nuts. 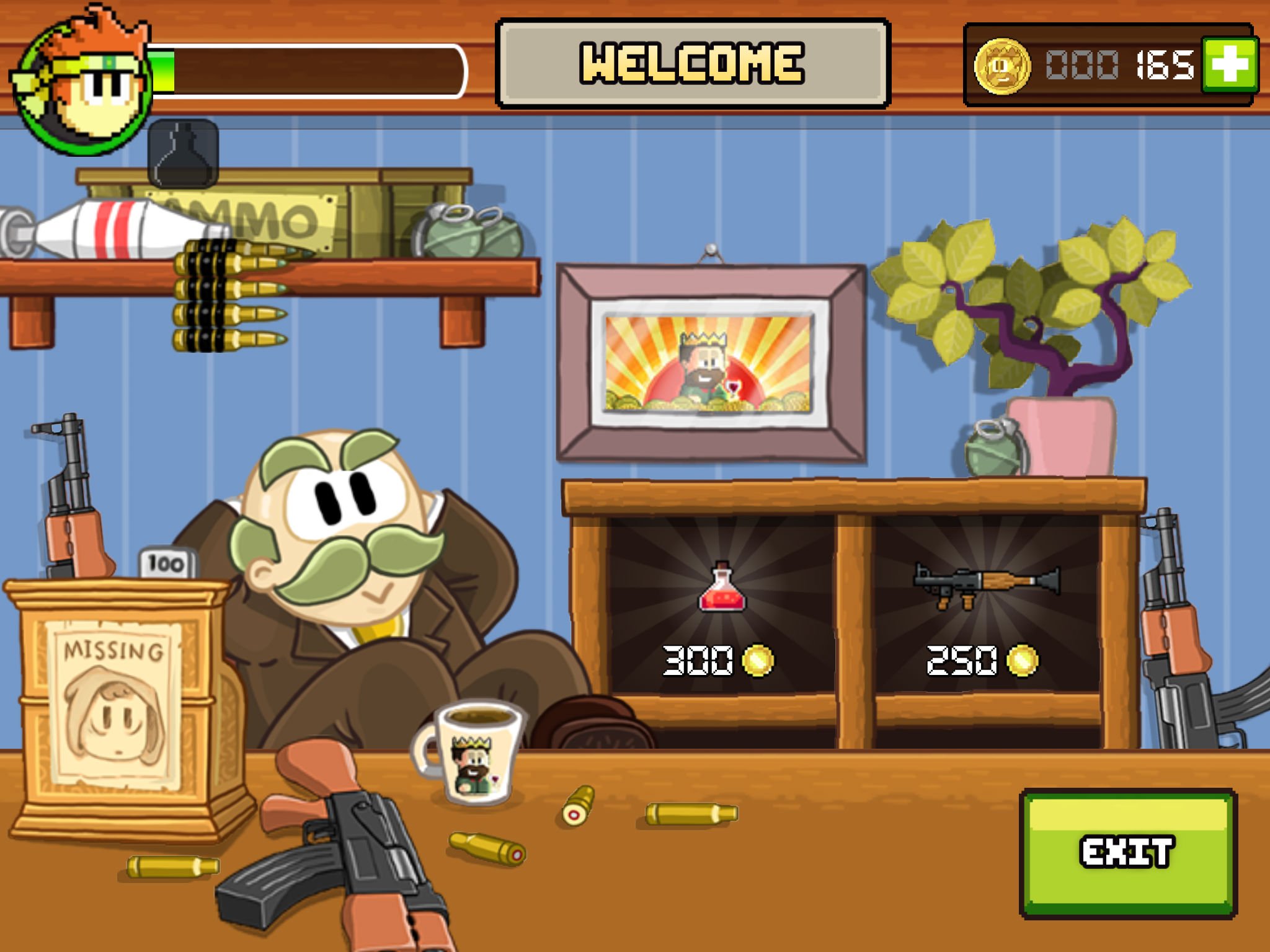 While you’re battling the forces of evil, you’ll be earning gold all the while. You’ll find it in coin form just magically floating in the air like in platformers from days gone by, but also as a reward for finishing levels and as a gift for watching videos (or, if you’ve paid to make the game ad-free, just waiting for you at the spots in which videos would be).

Gold is extremely useful but also forces you to make an important decision on how you want to spend it. Namely, you’ll have to decide if you would rather have upgrades to your character’s skills or more items.

Both have obvious benefits. Dan and Josie have identical upgrade paths with six different moves that each accept anywhere from two to four upgrades apiece. All can make your life easier, but the combo and sucker punch moves are especially beneficial. Since every upgrade level costs an increasing amount of gold, you might find yourself needing to save up thousands of coins to afford them.

That lessens what you can spend in the in-game shops, which you’ll find in every level. Shops offer different items every time, but among the useful goodies for sale are food to restore your health and thrown weapons (like throwing stars or knives) or guns. These all have their uses during particularly tough battles.

So while it’s not an absolute either/or situation, you shouldn’t spend your gold frivolously. Our advice would be to save up for upgrades you really want, and then spend on items when your current character build is more or less to your liking.

Miscellaneous Ways to Ensure You’re the Man (or Woman) 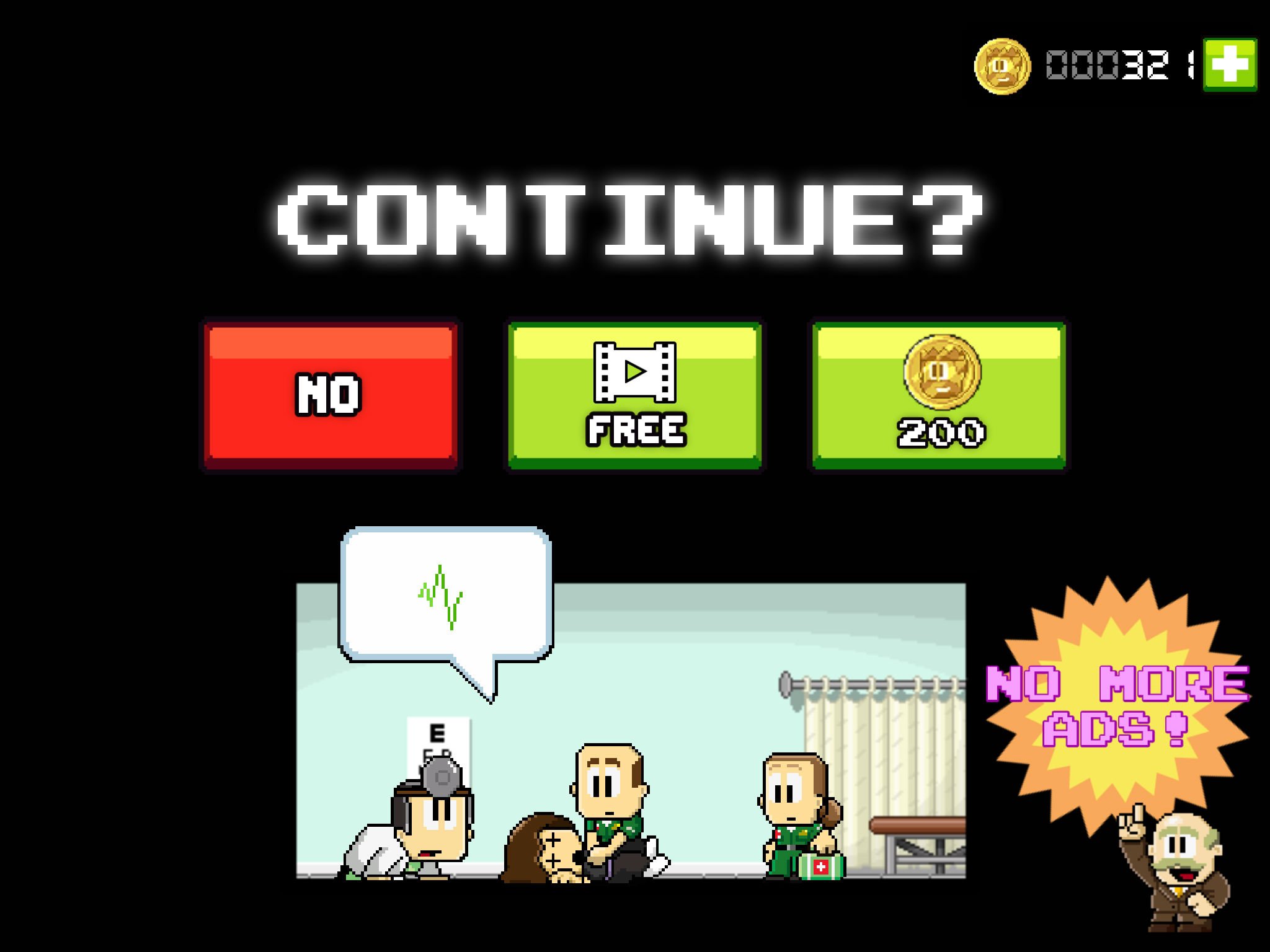 To finish up here before you go administer many beatings and leap between almost as many platforms, a few more tips and tidbits.