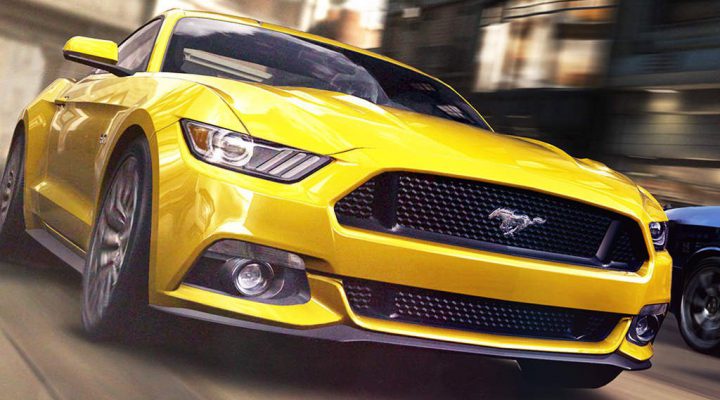 It’s time to get off the line quickly again. By that we mean drag racing, and by that, we mean not challenging the person next to you at the stoplight, but tackling some CSR Racing 2.

The sequel to the very popular CSR Racing has finally arrived from NaturalMotion and Zynga, and the basics are still the same. Hone your skills at drag racing, improve the cars you have, acquire new ones and advance through progressively more difficult race crews to prove your mettle Not much is different from last time out, right?

Actually, that’s not entirely true. Just enough is different to make things potentially confusing at times. But fear not: we’ve been playing CSR Racing 2 since it was in soft launch, so we’re happy to help. Browse on through our CSR Racing 2 Tips, Cheats and Strategies and you’re almost certain to find something to help make you a more successful racer. Just, uh, please don’t test any of these ideas out in real life.

Keep It in the Green 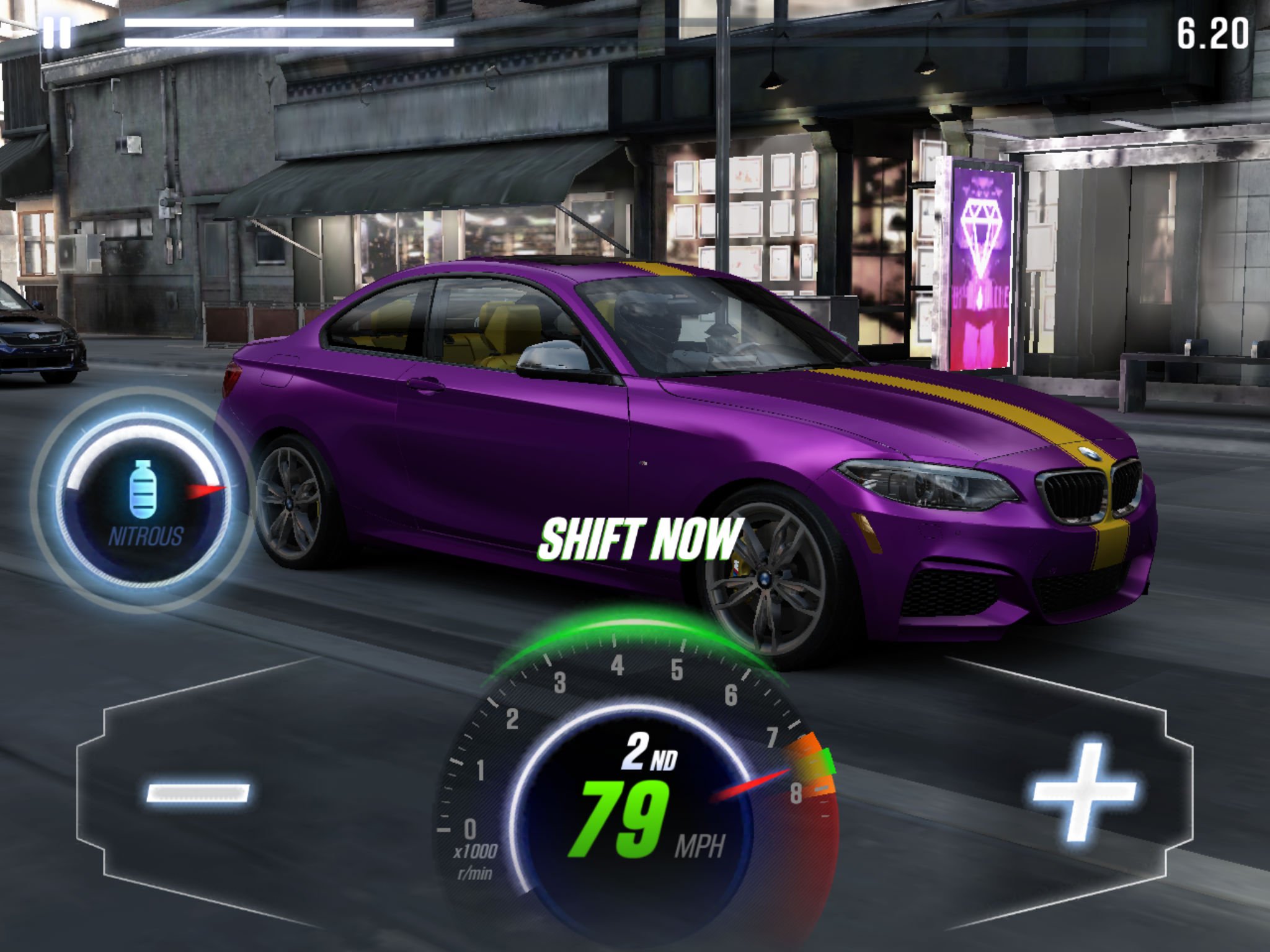 Gone is waiting for the green light to appear in your dashboard when launching and waiting for the right time to shift gears. Instead, your new buddy when it comes to going fast is an area of green on your tachometer.

At the start of a race, you’ll have to rev the motor so that the needle falls in the green zone when the countdown hits zero for a perfect launch, or pretty darn close for a good launch. Then when you are in the heat of the race, you’ll need to shift when the needle finds its way back into the green again.

Of the two techniques, finding a way to launch correctly is much trickier. Every car has a different launch zone, and you might have to do some experimenting every time you earn a new ride, because it’s almost guaranteed that what worked in your last one is no good.

BONUS TIP: For some cars, over-revving and timing it so the needle falls back into the correct zone at the end of the countdown might be worth a try.

A Brief History of Upgrades

Just like in the last game, your car gets faster by upgrading its various components. There are five levels of upgrades for all seven parts possible just by spending money or gold, with a sixth level that you can install only if you win the correct, car-specific part.

The first three levels (or Stages) of upgrades can be installed immediately. Stages four and five are imported parts (in the game’s world, anyway) and take time to be delivered unless you spend gold to skip the wait.

There are also special items called fusion parts that can be installed after you’ve done several upgrades to any given component. Fusion parts don’t add all that much to your vehicle’s potential, but they can make the difference between otherwise evenly matched cars, and they are linked to certain makes, not models, meaning an uncommon engine fusion part for your Tier 2 BMW could also be used in a Tier 3 BMW if so desired.

Besides just generally getting faster, it’s important to level up your nitrous, transmission and tires a few Stages, because … 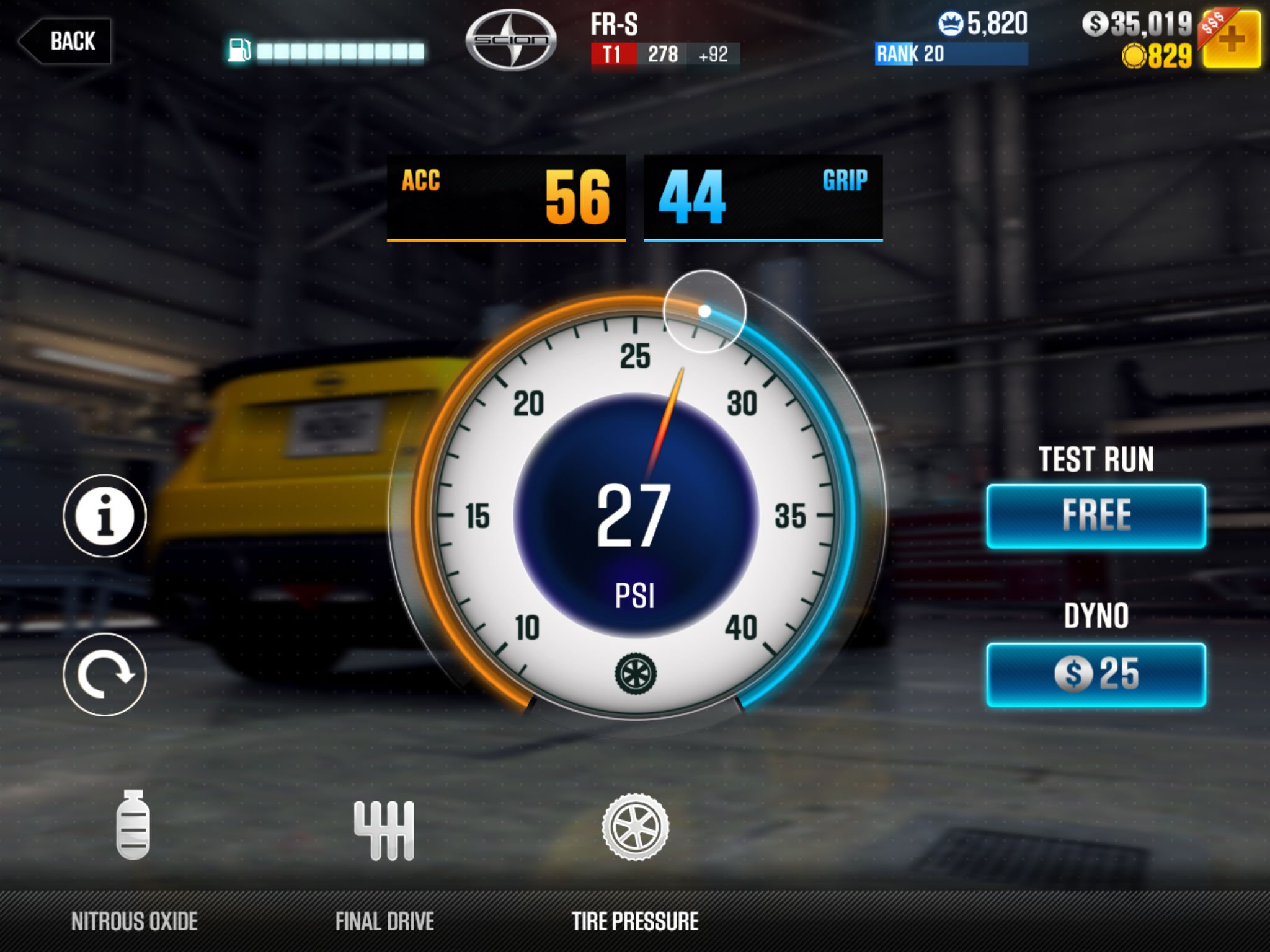 The tune option at the bottom of the garage navigation (the icon looks like a spark plug) isn’t just for show. Once you’ve installed Stage 2 upgrades, you can use it to exercise more control over the following aspects of your car’s performance:

The combination of tuning factors can either add or subtract from your car’s potential, as indicated by a positive or negative number at the top of the screen next to the base PP. Again, every vehicle is different, and you can use the Dyno and Test Run options in the Tune menu to experiment.

However, there’s one very important reason to visit the tuning screen, and that’s because not all races in CSR Racing 2 are created equal. Most are a quarter-mile, where being quickest off the line is key. Other races go a half-mile, and then it’s a good idea to sacrifice some initial acceleration for more top speed (since there’s time to build up to it).

We’ll go even further and say you will lose half-mile races if you don’t tune your car specifically for them. Check out the Final Drive once you have that option, and be sure to use the Dyno to see what impact changes make to your top speed. 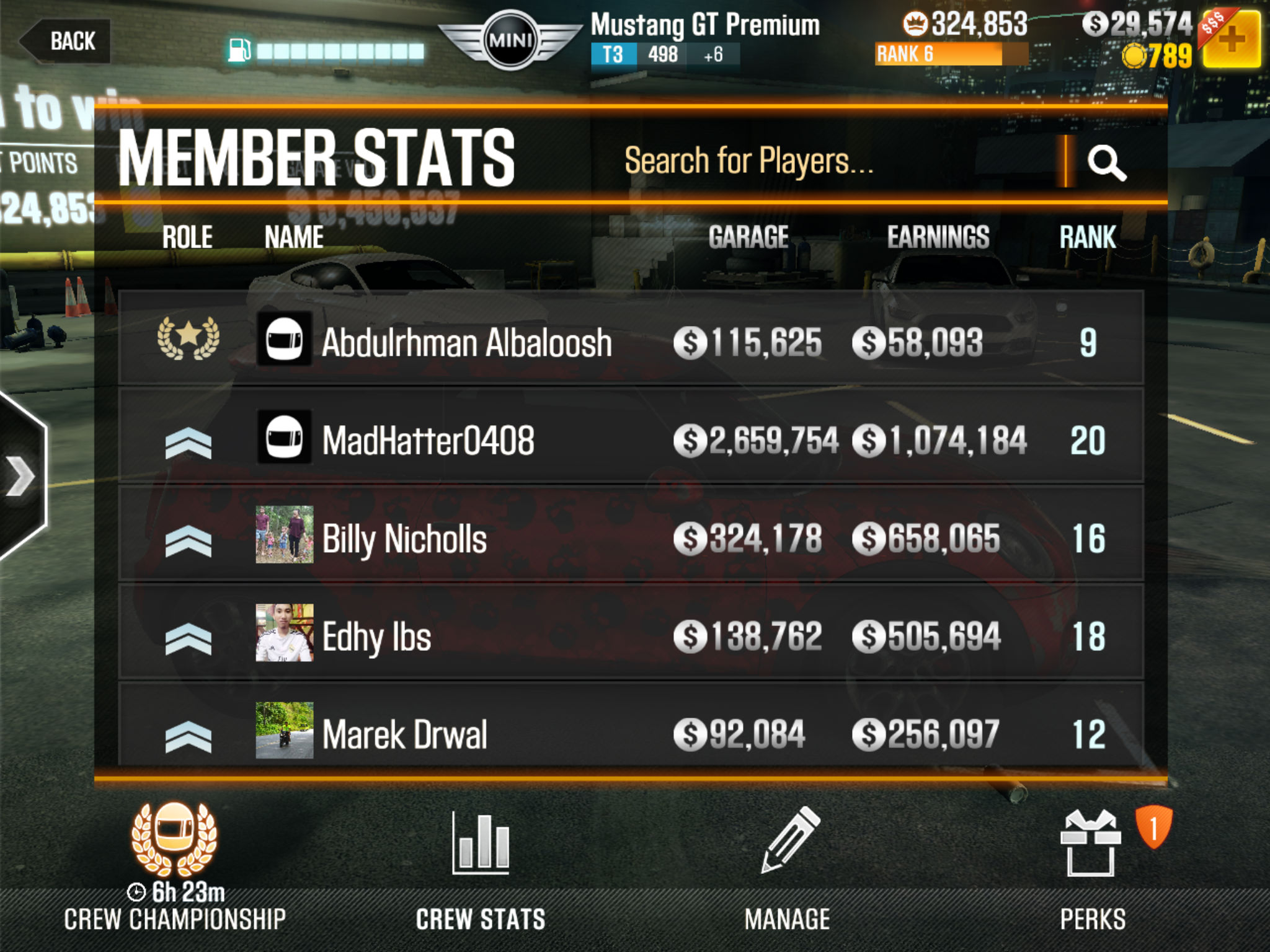 The big social addition to CSR Racing 2 comes in the form of crews. Like alliances or clans from other games, crews allow groups of players to work together toward common goals, earning perks that benefit all members.

Currently, there’s really no downside to joining a crew. While the goals are separated into “seasons” that span a few days, there’s no specific time you need to be online to contribute like in some games, and the goals are so general in most cases (like number of races, money earned, etc.) that simply playing the game tends to help the crew in some way.

Thus, even if you’re not usually a joiner, you’ll probably want to make an exception for crews. Just trust us on this. 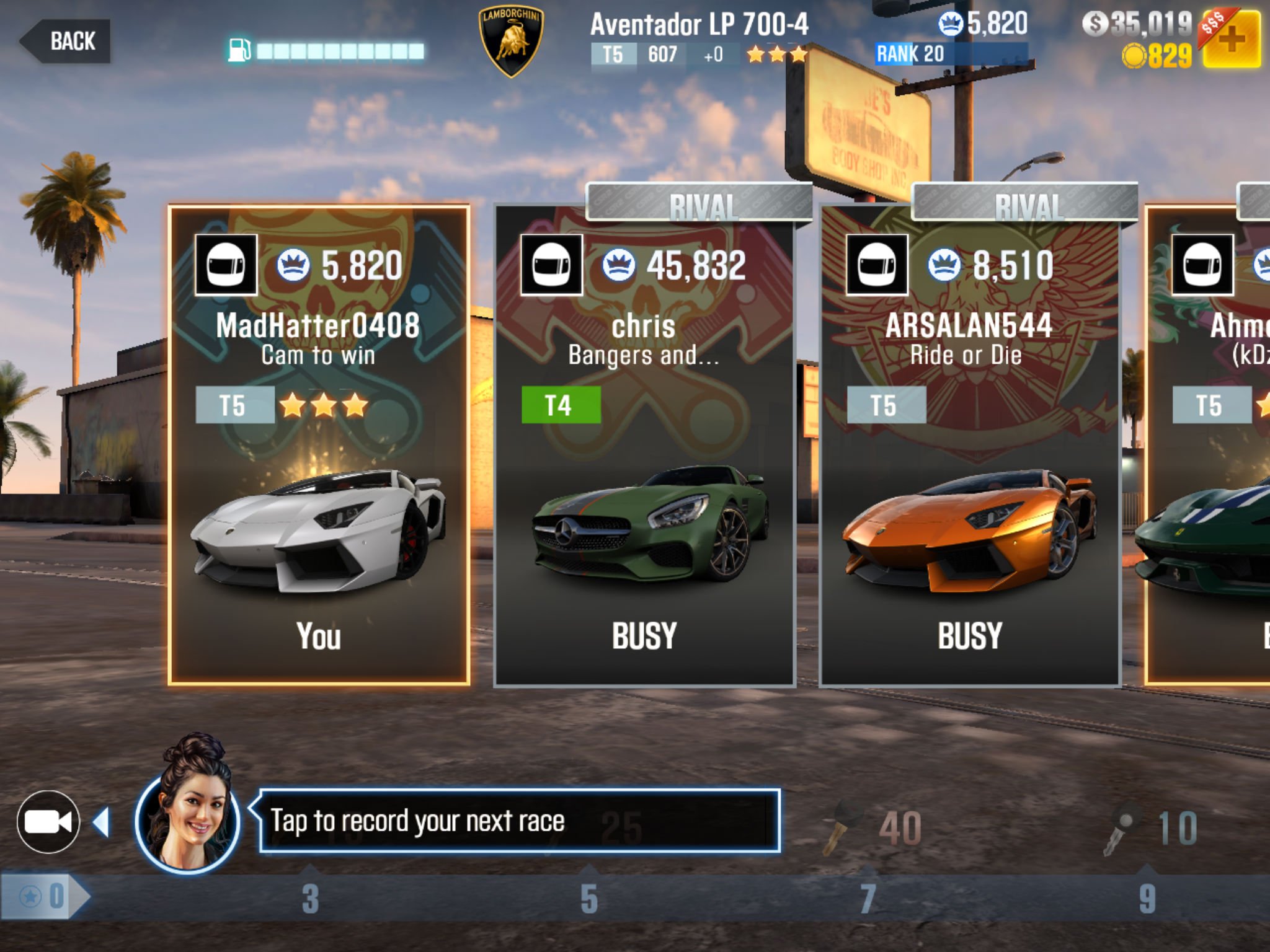 A really interesting aspect to CSR2 is the ability to face off against other human racers in live head-to-head multiplayer. No need for any asynchronous foolishness here.

While it might be intimidating to step up and take on other players, it’s definitely worth checking out. Win streaks in Live Races are among the best ways to have shots at rare cars, and you don’t lose anything (but some pride, one supposes) for losing a race in that mode.

Also, while you can wager in-game cash on Live Races, you don’t have to do so. In fact, money is only at stake from your personal stash if you agree to it. Give it a shot and see how you do, because you might surprise yourself.